Given the nature of the disease, its contagiousness and the treatment suggested, containing the pandemic requires localised solutions. 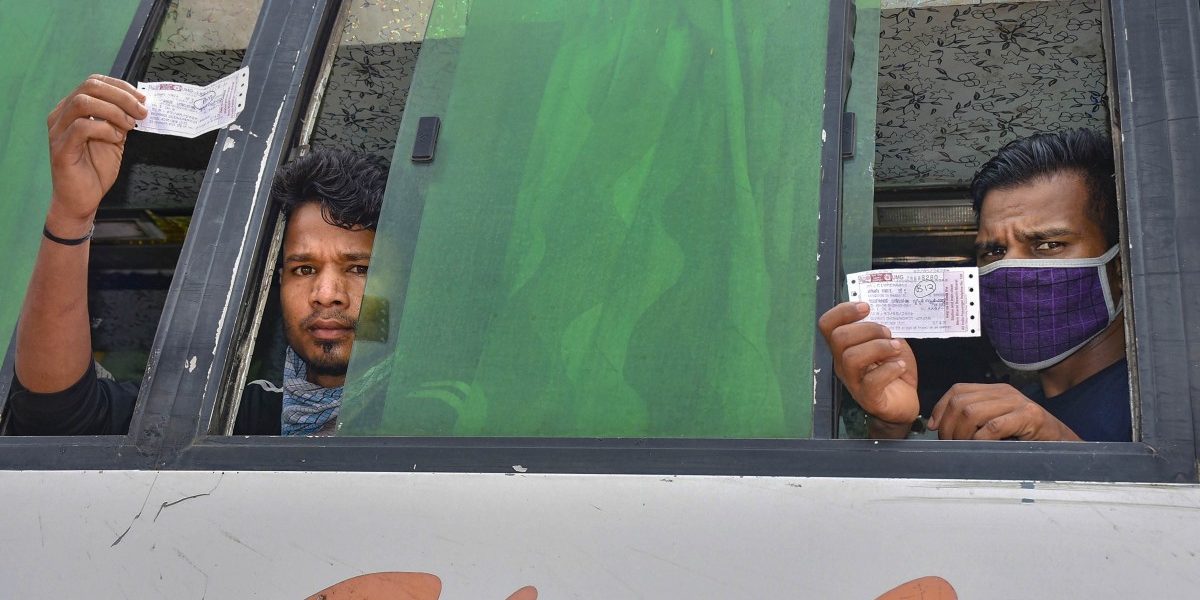 Migrant workers who reached Dhanbad by train on a bus to reach home. Photo: PTI

The impact of the pandemic is mushrooming across the world, with COVID-19 cases crossing 3.5 million. Of these, around 33% are in the United States, followed by Europe with around 42% and Asia with about 16% of cases. While the concerns about abysmally low testing rates are afloat, India accounts for about 7.5% of the total number of cases in Asia and just about 1% of the total number of cases across the world.

Nine states – Maharashtra, Gujarat, Rajasthan, Uttar Pradesh (UP), Madhya Pradesh (MP), Tamil Nadu, Andhra Pradesh, Telangana, West Bengal and Delhi – comprise 85% of the total cases in India. Given the nature of the disease, its contagiousness and the treatment suggested, containing the pandemic requires localised solutions and therefore, states are best suited to handle the crisis. Also, health falls under the purview of states.

However, as recorded by the leaders of many states, the first 21-day lockdown was enforced without an elaborate consultation with them except for a hint of a lockdown with the one-day Janata Curfew on March 19.

Thus, Prime Minister Narendra Modi’s promise to place ‘Centre-state relations on an even keel’ and his commitment towards ‘cooperative federalism’, of which he spoke so passionately in his first speech in parliament as prime minister, are problematic.

Especially in the context of attempts to resume economic activity alongside containing the disease.

Migrant workers, economic activity and a call for autonomy

The announcement of the extension of lockdown till May 17, with a new set of guidelines, barely scrapes the surface in recognising and addressing economic and social ramifications of the pandemic. Notably, the aforementioned states account for 66% of India’s cumulative Gross State Domestic Product (GSDP) for 2017-18. These states also account for 80% of red zones and 58% of orange zones.

In response to the demonstrations mostly by migrant labourers over the guidelines that policed the second lockdown and restricted their movement, the guidelines issued on April 29 and May 1 have eased restrictions on the movement of migrant labourers, students and pilgrims. However, the allusion is towards the return of stranded people to their hometowns.

A linear idea of ensuring that workers reach their hometowns is limiting. Firstly, such a move portends the further spread of the virus. The influx of migrant workers into their home states of Uttar Pradesh, Bihar, Jharkhand and Chhattisgarh, which already face severe financial and medical deficits, would worsen matters for the states. Notably, Jharkhand’s chief minister, Hemant Soren, was concerned that once the migrant population is allowed to move back to their hometowns, Jharkhand will see an influx of 7-8 lakh vulnerable people, which might exacerbate the state’s problems.

Also read: States Must Be Given More Ownership of India’s COVID-19 Containment Strategy

The scrapped Household Consumer Expenditure in India survey serves as a useful signpost which noted that rural Monthly Per-Capita Expenditure decreased by 8.8% in 2011-12 and 2017-18 period and the rural monthly spending on food decreased by 10%; both of which would be worse in the case of poorer states.

Secondly, the sustenance of agricultural, industrial and construction activities would be difficult in the absence of a majority of workforce in the backdrop of lifting of restrictions, given these workers are going back to their hometowns. For instance, in Punjab 1,496 clusters of migrant labourers across all the districts along with 164 shelters are being utilised to deal with a labour shortage in rabi harvest. The rabi crop constitutes nearly 50% of the food grain production in India of which states like Punjab, Haryana, MP and UP are the largest producers of wheat.

Watch: Instead of Federalism, Govt Moving Towards Over-Centralisation: Jairam Ramesh

Punjab has issued 27 lakh e-coupons to farmers for bringing the crop to markets, while in Haryana farmers need to register themselves on a portal, after which 100 farmers per day bring their produce to markets, and in MP arrangements for door-to-door procurements have been made. Also, the harvest season stands to employ a large number of agricultural labourers, which would subsequently benefit their families in their hometowns.

At this juncture, while the guidelines help with the autonomy needed for harvesting, procurement and transportation of crops across inter- and intra-state networks, the retreat of migrant workers has complicated the matrix. Further, the states have not been able to address the immediate needs of the migrant workers. Data collected by Stranded Workers Action Network reported that 96% of the workers had not received rations from the government.

The demand for rations is not exclusive to the migrant workers alone but to the millions of poor, thereby calling for an immediate response in the form of moving the grains from the Food Corporation of India godowns, and enabling states to provide groceries to anyone who approaches fair-price shops, by easing the restrictions tied to ration cards. Data suggests that India has enough grains to universalise the public distribution system up to six months comfortably. Such universalisation is effective if done at the state level instead of a one nation-one ration card approach.

States’ revenue and a resolve for federalism

The regulations in place seek to jeopardise the states’ efforts in tackling the disease in multiple ways. Firstly, the Centre is criticised for including the PM-CARES relief fund as an avenue of expenditure under the ambit of Corporate Social Responsibility (CSR) contributions. However, contributions to the ‘Chief Minister’s Relief Fund’ or ‘State Relief Fund for COVID-19’ do not qualify as admissible CSR expenditure. When the rationale was questioned, an amendment by the United Progressive Alliance-II government was proffered. However, if there is political will, a simple ordinance suitably amending the law will enable states to receive CSR funds.

Secondly, faced with a funds crunch characterised by reduced economic activities and delays in receiving GST dues and arrears, the state governments of Kerala and Rajasthan have sold their 15-year bonds. Additionally, states like Gujarat and Maharashtra also reported 38% and 40% decline in their stamp duty collection, which contributes significantly to their income.

For the period 2011-12 to 2018-19, on an average, 56% of states’ tax revenue came from their own collections and 44% came from central transfers. However, in the GST regime, the states have limited autonomy on 65% of the revenue they generate and are more dependent on central transfers. Inter-alia, states receive sizeable revenue from alcohol. For instance, Punjab and Tamil Nadu, earn 8.8% and 17% of their revenue from alcohol, and thus in a fund-deficient situation the lifting of ban on alcohol is a respite to the states. On the other hand, health hazards apart, while an arbitrary nationwide ban led to suicides as reported in states like Kerala and Tamil Nadu, the subsequent lifting of the ban has abetted excessive crowding in many cities.

Thirdly, for 2019-20, Rs 1,487 crore was released from the Centre towards the Members of Parliament Local Area Development Scheme (MPLADS), which is just 55% of the total funds that the states were entitled to. Furthermore, the suspension of MPLADS and diversion of the funds to the Consolidated Fund of India is also an anti-federal move, which strips states of its autonomy and discourages locally tailored solutions by the MPs.

Fourthly, as per the new RBI guidelines, on April 1, the Ways and Means Advances (WMA) limit of states was increased to Rs 51,560 crore from Rs 32,225 crore for the first half of 2020-21. The increase in WMA is helpful, but it also needs to be complemented with an increase in the cap of fiscal deficit as percentage of GSDP from the existing 3% as mandated by the Fiscal Responsibility and Budget Management Act. In the absence of a strong bailout package at the Central level, the relaxation in borrowing limits will help the states to deal with the additional spending during this crisis.

Avoid a square peg in a round hole

The current strategy of fighting the pandemic remains at odds with the spirit of the constitution, which codifies the Indian federal system, appropriately testified by the Supreme Court in the SR Bommai case. Drawing from Jaffrelot and Kalyankar, federalism is well entrenched in Indian politics too and the continued dominance of regional parties over the last three decades affirm the same.

A successful approach to tackle the crisis would still need Centre’s intervention and guidance in a facilitative manner, where the Centre would communicate extensively the best practices across states, address the financial needs effectively, and leverage national expertise for scalable solutions.

A desire to go for a command-and-control approach led from the Centre will lead to a square peg in a round hole situation that would aggravate miseries on ground. In fine, the pandemic has come to serve as a perfect case study to revisit the idea of federalism in India and start action towards undoing the prevalent centralising tendencies in the Indian polity and governance.

Vignesh Karthik K.R. is a doctoral researcher at King’s College London. He tweets @krvtweets. Saumya Gupta is a business analyst specialising in strategy and has a masters in social sciences from the University of Chicago.