Opposition leader Mallikarjun Kharge has dissented to the NHRC appointment on the grounds that candidates from marginalised communities were not considered. 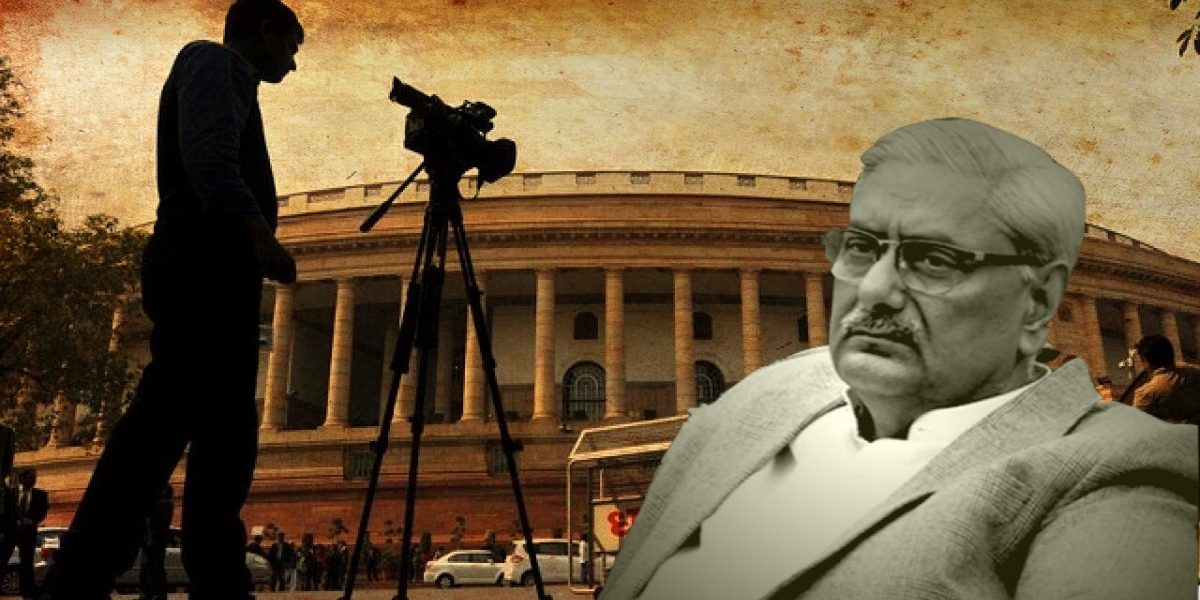 New Delhi: The controversial former Supreme Court judge, Arun Kumar Mishra, will be the new chairperson of the National Human Rights Commission (NHRC) after the government proposed his name and pushed it through a 5-man selection committee in which only one member – opposition leader Mallikarjun Kharge – is not a member of the ruling National Democratic Alliance.

Justice Mishra stoked controversy in February 2020, when as a sitting of the apex court, he described Prime Minister Narendra Modi as an “internationally acclaimed visionary who could think globally and act locally” at an international conference.

The selection committee, headed by Modi, cleared the names of Justice Mishra and two other members – former Intelligence Bureau director Rajeev Jain and a former chief justice of Jammu and Kashmir high court Mahesh Mittal Kumar, while Kharge dissented and later submitted a letter to Modi formally recording his reasons.

While the two members were selected from a shortlist of 12 names, Justice Mishra’s name was zeroed in on from a shortlist that included three former chief justices of India, The Hindu has reported. The names of the former CJIs considered are not known, though there are only five former chief justices whose age would have qualified them for the position: Justices T.S. Thakur, J.S. Khehar, Dipak Misra, Ranjan Gogoi and Sharad Bobde.

This is the first time in its 27-year history that the government will have formally appointed to the chairmanship of NHRC someone other than a former chief justice of India.

In 2019, the Protection of Human Rights Act (PHRA) – which stipulated that the chairman must be a former CJI – was controversially amended to allow the appointment of any former judge of the Supreme Court, with critics noting at the time that this would give the prime minister even greater ability to curry favour with judges and cherry pick names with a view to ensuring the NHRC does not cross swords with the government .

Also Read: How Justice Arun Mishra Rose to Become the Most Influential Judge in the Supreme Court

Although the official announcement is yet to be made, the high-powered committee – comprising PM Modi, Union home minister Amit Shah, deputy chairman of the Rajya Sabha Harivansh, Lok Sabha Speaker Om Birla, and Kharge as leader of the opposition in the Rajya Sabha  – met on the evening of Monday, May 31, to clear the names.

While Kharge raised a general objection to the lack of consultation prior to the meeting, he raised a specific point of dissent during the discussions about the lack of any candidates  from the Dalit, Adivasi or minority communities. He argued that as most of the complaints that the NHRC deals with relate to crimes committed against these very communities, there should be at least one representative in the NHRC from among them.

He subsequently recorded his note of dissent in writing and sent it as a letter to the prime minister the same day. 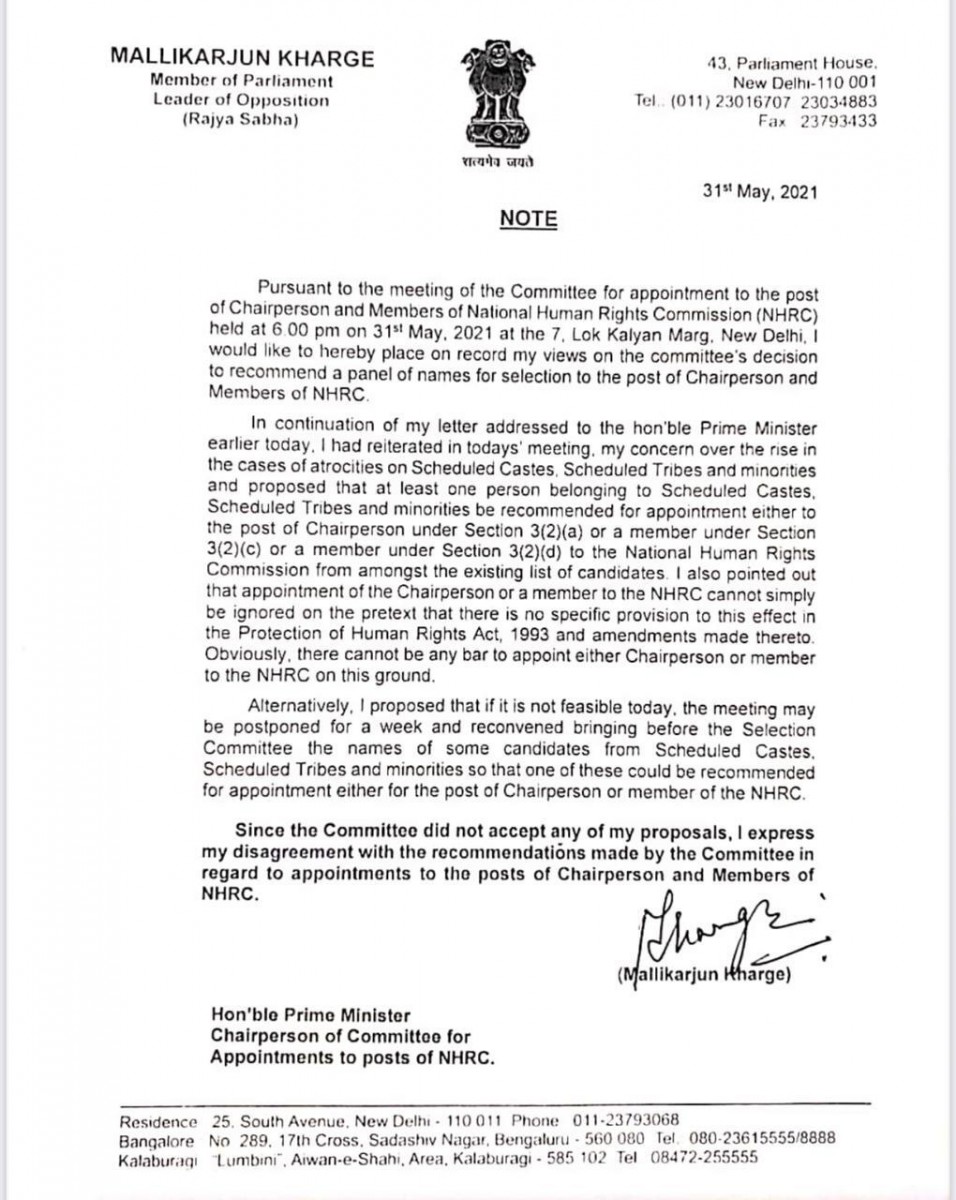 While other members on the panel, including the prime minister, pointed out that there was no such specific provision in the PHRA relating to NHRC appointments, except in the case of women members. Kharge responded that the lack of such provision should not prevent the government from appointing a person from a marginalised background to the NHRC. “Obviously, there cannot be any bar to appoint either chairperson or member to the NHRC on this ground,” he wrote.

Kharge records in his note that  he suggested the panel meet again in a week’s time to consider some names from the SC, ST and minority communities, but in vain.

During his time on the Supreme Court, he became known as a judge who often ruled in ways that would make the executive happy. As The Wire‘s legal editor V. Venkatesan has written, it was to his bench that some of India’s most politically sensitive cases were inevitably marked.

Some of his judgments on cases that have a bearing on human rights, such as the Haren Pandya matter, also mark him out as an unlikely candidate to head the national human rights body.

The last NHRC chairperson former CJI H.L. Dattu,  retired in December 2020, and the position has been vacant ever since.

The PHRA was amended in 2019 by the Modi government on the plea that limiting the chairpersonship of the NHRC to a former CJI would make it hard to fill the position easily. But human rights activists and NGOs said that giving the government greater discretionary power to choose any judge it liked was an even greater danger. In a statement at the time, the All India Network of NGOs and Individuals working with national and state human rights institutions (AiNNI) noted:

“This will only allow the appointment committee to handpick the most ‘favourable’ judge to head the NHRC which is a matter of grave concern. If the NHRC needs to be headed by a judge of the Supreme Court, in the interest of the institution, it is desirable that it is the CJI, hence restricting the government’s influence on the NHRC and the judiciary. Justice J S Verma opposed a similar amendment with this provision that was proposed in 2006 and the provision was thereafter withdrawn when the bill came to the Raja Sabha. “

Justice Mishra’s appointment, incidentally, will allow him to regularise his beyond-entitlement occupancy of an official bungalow in Lutyens’ Delhi. Though he retired from the Supreme Court on September 2, 2020, he never moved out of his residence despite the rules requiring him to do so.

In a five-part series, V. Venkatesan examined the judicial career and pronouncements of Justice Arun Mishra, the Supreme Court judge to whose docket a host of politically sensitive cases were entrusted by three successive Chief Justices of India, though not always without controversy. See Part 1 | Part 2 | Part 3 | Part 4  | Part 5