The Constitutional Conduct Group says that the Yogi Adityanath government has "ushered in a model of governance which swerves further and further away from the values of the constitution and". 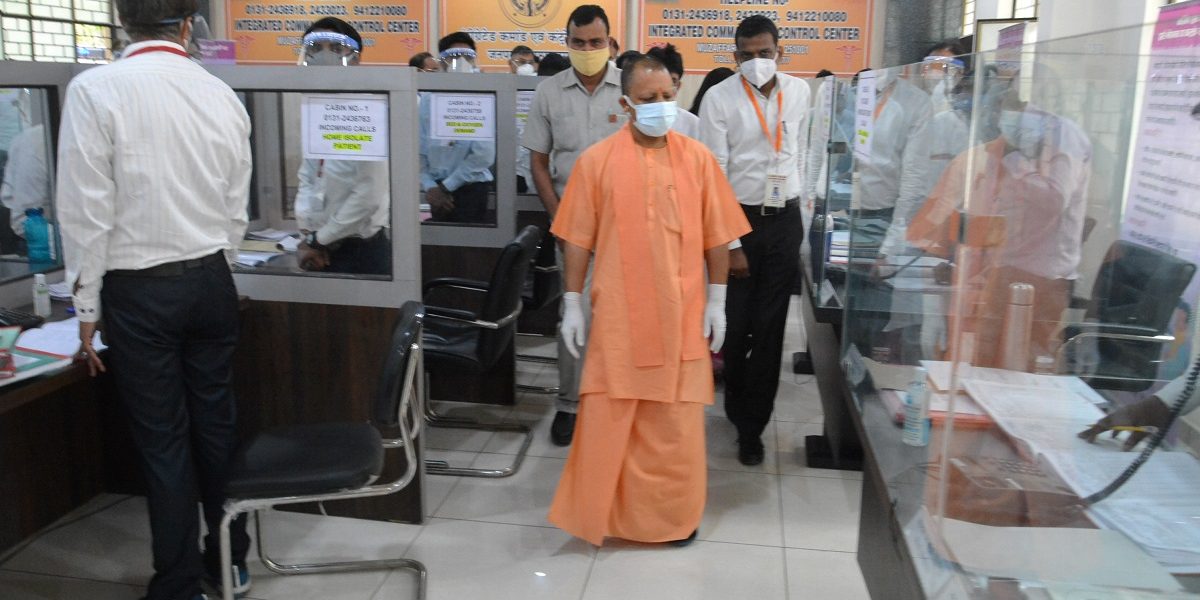 NewDelhi: A group of former civil servants has written an open letter condemning the ‘complete breakdown’ of governance and blatant violation of the rule of law in Uttar Pradesh, saying the Yogi Adityanath government has “ushered in a model of governance which swerves further and further away from the values of the constitution and the rule of law with each passing day”.

The statement by Constitutional Conduct Group, supported by several other concerned eminent citizens, said that clear that all branches of the administration in UP, including the executive magistrates and the police, have “collapsed”.

“We fear that, unless checked now, the damage to the polity and institutions in the state will result in the decay and destruction of democracy itself,” said the signatories, who have no political affiliations but are “committed to the constitution of India”.

They say that detentions, criminal charges and recovery orders have become common methods to suppress the right to dissent, mentioning among other things the arrest of journalist Siddque Kappan. Other developments which cause concern are rampant ‘encounter killings’, the so-called love jihad law, misuse of the National Security Act and the government’s handling of the COVID-19 crisis, the signatories say.

“We fear that, unless checked now, the damage to the polity and institutions in the state will result in the decay and destruction of democracy itself,” the statement says.

They suggest measures which would reverse the administration’s trajectory. Among the prominent former civil servants who have signed the statement are Najeeb Jung, Harsh Mander, Shivshankar Menon, Aruna Roy, Julio Ribeiro, Jawhar Sircar, while it is supported by Justice (Retired) A.P. Shah and more than 200 other signatories who are not members of the Constitutional Conduct Group.

The full statement and list of signatories have been republished below.

We are a group of former civil servants of the All India and Central Services who have worked for decades with the Central and State Governments. As a group, we have no affiliation with any political party but are committed to the Constitution of India.

We write today to convey to the Government of India and the Government of Uttar Pradesh (UP), as also to the people of India, our deep anguish at what we see happening in UP.  We note with mounting alarm that the present ruling regime in UP has ushered in a model of governance which swerves further and further away from the values of the Constitution and the rule of law with each passing day. It seems clear that all branches of the administration, including the executive magistrates and the police, have collapsed. We fear that, unless checked now, the damage to the polity and institutions in the state will result in the decay and destruction of democracy itself.

One particularly egregious example is the arrest of Kerala journalist Siddique Kappan, on his way to the UP town of Hathras to report on the brutal gang-rape of a 19-year-old Dalit girl and the complicity of the administration in the hurried overnight cremation of her body that had caused national outrage. Kappan has so far spent more than 200 days in prison. More recently, these repressive measures have taken the form of punitive actions against those highlighting lethal shortcomings in UP’s healthcare system.

From 2017 to 2020, 124 alleged criminals were shot dead in 6,476 “encounters”, according to datacompiled and released by the UP police to the media. The word “encounters” has been used to also include the infliction of serious injuries caused, for example, by shooting a person in both knees and leaving him disabled for life. This means a police “encounter” every five hours every day during the first three years of CM Adityanath’s tenure. In a January 2019 letter to district magistrates, the Chief Secretary listed these “encounters” including  extra-judicial killings to be among the prominent “achievements” of the Adityanath administration. The “encounter” campaign led by Adityanath crosses new lines, because data shows that most of those killed in these encounters are either petty criminals or innocents,against whom no charge has been proven. They are also predominantly Muslims, Dalits and other backward castes. . The fact that a significantly disproportionate percentage of those killed till August 2020 were Muslims carries its own message.

UP has seen a systematic blurring of the lines between actions of the state, particularly its police force, and that of vigilante groups such as the Hindu Yuva Vahini and other ‘cow vigilante’ groups that have enjoyed immunity for their violent actions. Members of these groups are appointed as “police mitr” or friends of the police, endowing them with authority and legitimacy, and enabling the police to work openly with vigilante groups. Recent administrative orders further institutionalise vigilantism under the garb of community policing through the ‘Prantiya Rakshak Dal’ and the ‘S10’.

On 24 November 2020, the Uttar Pradesh cabinet passed an ordinance “Uttar Pradesh Prohibition of Unlawful Conversion of Religion Ordinance”. On 25 February 2021, this was passed in the legislature by a voice vote.  The SIT set up by the state government to look into the cases of “love jihad” could find “no evidence of foreign funding or organised conspiracy”. On another occasion, the Union home ministry in February told Parliament that “love jihad” was not defined under the current laws of the country. The bogey of “love jihad”, thus  has no empirical, legal or official standing.

Euphemistically against ‘forceful conversion’, the law prohibits conversion from one religion to another by what it calls the use of misrepresentation, force, undue influence, coercion, allurement, fraud or marriage. These are defined ambiguously leaving ample space for the police and administration to misuse the law against minorities; for the police to file arbitrary cases; and for vigilante groups to threaten families, assault minorities, organise mobs and create conditions for minority exodus.

This law has been used by the state to frame innocent Muslim men who have friendly or romantic relations, or enter into marriage, with Hindu women. In just a month after the Ordinance, 86 people were booked in 16 cases alleging conversion for love or marriage among Hindu women and Muslim men. 54 people were arrested, including friends and family members of the main accused. The key accused in all the cases are Muslim men.

Since coming to power, the bias of the present government of UP against Muslims has been open and uninhibited. The recent instance of the destruction of a building allegedly housing a mosque in Barabanki, in contravention of a high court stay order, is a flagrant display of disregard for law and procedures. Further, keeping in mind the forthcoming elections, we apprehend that such actions by the UP government, if not controlled, may cause communal polarisation and disturbances.

The National Security Act, 1980 (NSA) is a draconian preventive detention law under which the government can pre-emptively detain, up to one year, anyone it thinks is a threat to the security of the country or state, public order or maintenance of supplies and services essential to the community.

However, officials under the UP government have been using the law openly against mainly Muslims, Dalits and dissenters, for alleged offences that cannot be seen as a threat to national security. As per reports, of the 139 people booked under the law the year 2020, 76 are for alleged cow slaughter, 13 for anti-CAA protests and 37 for alleged heinous crimes. In 2017, the Director General of Police directed SPs and SSPs of all districts to book people accused of cow slaughter or transportation of cows for slaughter under NSA and the Gangster Act. In April 2020,the government said that whoever attacks police personnel during the COVID-19 lockdown will be booked under NSA. These blanket orders to apply NSA defeat the purpose of letting District Magistrates, who understand the ground situation, to judiciously apply their judgment to each case.

The hubris customary with the UP government, is also in full display in its handling of the Covid crisis. The Allahabad High Court scathingly observed that medical services in UP are running at god’s mercy. (Ram Bharose). The doctors trying to meet the Chief Minister to explain the ground situation and to present a set of demands were instead detained. A news article on health services in rural UP was titled, ‘People are Dropping Dead like Flies in Uttar Pradesh Villages’. As a case in point,Dhanoli village in Gorakhpur District did not have a single house without a Covid patient. Many of the PHCs in villages are shut or do not have any medical personnel. The people are left to fend for themselves. There are no testing centres available. Reports of patients dying due to non-availability of oxygen have been frequent in UP.

The Chief Minister however claimed that not only was there no such shortage, but those alleging this on public forums would be arrested for spreading false information, and their properties seized. The police proceeded to frame charges against hospitals which claimed oxygen shortage.

People faced massive difficulties in getting tested for Covid. Reports emerged that ‘unofficial’ orders had been issued to private labs to stop testing.

The most damning illustration of the government’s failure to provide healthcare to Covid patients was the gruesome spectacle of several thousand dead bodies floating in the Ganga river and buried in shallow graves in the sands along its banks. The world bore witness to the catastrophe that the people of UP had to endure owing to the failure of the government to act in time. Reports from crematoria show that across districts, deaths are being massively undercounted in Uttar Pradesh.

A call to restore constitutional norms

Names of CCG members who are signatories