“He was murdered openly in a foreign country, but no questions were asked." 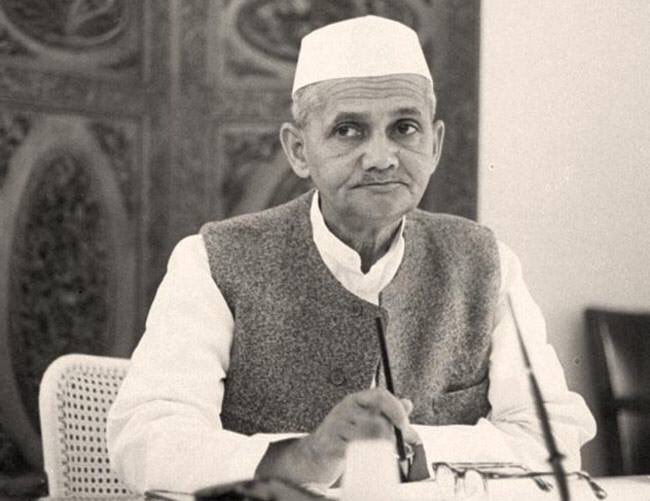 New Delhi: The family of former prime minister Lal Bahadur Shastri has hailed a recent Central Information Commission (CIC) order directing that the records of the Raj Narain Committee – constituted in 1977 to look into the mysterious death of Shastri in 1966 – should be made public.

Pleased with the CIC order, the fourth-eldest of Shastri’s six children, Anil Shastri, said: “Our demand was being raised for a long time now. All the documents pertaining to Shastri ji’s death should be made public. If Subhas Chandra Bose’s documents have been made public, then so should Shastri ji’s.”

Shastri died on January 11, 1966, in Tashkent – then in the Soviet Union – barely hours after he signed the post-1965 Indo-Pak War declaration with Pakistan president Mohammad Ayub Khan. Soviet premier Alexei Kosygin moderated the talks. Though his death was said to be the result of heart attack, the family believes he was poisoned.

Responsibility of PMO to inform people what happened to former PM

In his order, information commissioner M. Sridhar Acharyulu had directed the PMO, the external affairs ministry and the home ministry to state the categories of documents pertaining to Shastri’s death which were available with them. He said they have a “constitutional duty to inform and the people have legitimate expectation to know the truth behind the death of their beloved leader”.

Further, he added that it was the “primary responsibility of the PMO to inform the people what happened to late Lal Bahadur Shastri, who once was its head.”

Another key aspect, which Acharyulu raised in his order, pertains to the Raj Narain committee, which was formed by the Janata Party government in 1977. The commissioner noted with concern that the personal physician of Shastri, R.N. Chugh, was killed, and his personal cook Ram Nath, who had accompanied him to Tashkent, lost his legs in a road accident while they were on their way depose before the committee.

Acharyulu also noted that the CIC had earlier also ordered disclosure of records, including 11 pages related to the death held by the cabinet secretariat, and for which exemption had been sought by the government. He said, if these records are claimed to be secret and confidential and thus exempted under Section 8(1)(a) of the RTI Act, then the government must produce them in a sealed cover before the commission so that it may adjudicate whether or not the assumptions are correct.

‘Shastri’s entire staff was withdrawn, he was kept alone’

Lauding the bold order from the CIC, Anil told The Wire that the circumstances surrounding Shastri’s stay and treatment in Tashkent had raised many doubts.

“Shastri ji’s death took place under mysterious circumstances. There has been doubt from the beginning and the family members, as also a large section of the society has been wanting to know as to what happened in Tashkent. His face had turned blue, there were white spots on his temple and there were very shoddy arrangements with regard to his accommodation. He was made to stay alone and all the staff, which had accompanied him, was made to stay somewhere else. The cook who had accompanied him had also been changed and a local was deployed in his place,” he said.

The late premier’s son also questioned why “there was no call bell, no telephone in his room” and why “his place of stay was 15 kilometres away from Tashkent city”.

He said from what was conveyed to the family, it was learnt that after Shastri had taken ill (due to suspected poisoning) “by the time the Russian doctors reached, it had taken about 15-20 minutes. Also, there was no medical aid facility there. No ambulance had also been stationed there. The doctors had to come there. He could not have been rushed.” All these aspects sound suspicious, as Shastri was then the prime minister of India on a state visit to the Soviet Union.

“All these things created a doubt and then during the UPA regime, there was an RTI activist Anoo who had asked a query to the PMO at that time as to why the government cannot declassify the documents pertaining to Shastri ji’s death. The reply that came from PMO was that it was on account of security reasons and because our relations with a foreign country may get affected we cannot do this. So this created further doubt in the minds of the people,” said Anil, while referring to the earlier CIC order Acharyulu had also raised.

“So in view of these developments, I think this is a welcome step by the CIC. Now I think the prime minister must give instructions for declassifying the documents,” Shastri’s son demanded.

Anil also referred to how noted journalist Kuldip Nayar, who was present in Tashkent, had described the whole scenario. He also pointed out how Nayar had accused T.N. Kaul, who was then India’s ambassador in Russia, of later literally badgering him after an MP had racked up charges of poisoning.

“And not only that, even after his death, there was a query from the Russian authorities whether a post-mortem should be performed on Shastri ji’s body before it leaves Russia. But then Kaul said that it was not necessary and so the post-mortem was not done,” said Anil. Incidentally, in 1970, Lalita Shastri had first raised doubts in public about her husband having been poisoned.

Anil said his father died on the morning of January 11, 1966 and later, the same day, his body was brought from Russia. “There were a lot of marks on his body. His face was blue and on both sides of his forehead on the temples there were white marks.”

He also recalled that “some of his personal belongings, like his diary and his thermos, did not come back. Whatever did return from Russia has been displayed at his memorial.”

Another member of the family, Neera Shastri, who is the wife of Shastri’s youngest child, late Ashok Shastri, claimed that after the former prime minister’s body was brought back to India, a senior Congress leader of the time had taken extra pains to baste it with sandalwood paste. “Every attempt was made to hide the real condition of the body from the masses,” she alleged.

A social activist and BJP leader, Neera Shastri also claimed that “Shastri ji had apparently hidden a note in his glass case in which he had written that he was served milk by the local cook who had replaced his own cook, and on consuming it he had started feeling uneasy.”

She said when his body was brought back, lakhs of people had seen how there were a large number of spots on it. “And people also saw a prominent leader of the time smearing a bucket full of sandalwood paste on it. This was done to ensure that people could not see the spots.”

How the family came to know about it

“My husband was in Class 9 then, Anil Shastri was in inter and Hari bhai was slightly older. In the evening, Shastri ji had called up home and discussed the agreement. He asked the family members for their opinion upon which he was told to the effect: “Babu ji aapnay jo faisla liya hoga, who sahi hoga. Janata aapkay saath hi rahegi” (Whatever decision you would have taken would be correct and people will remain with you),” she recollected.

After that, she said, his assistant, his doctor and his cook were all removed from where he was staying.

She said while his cook was sent somewhere, T.N. Kaul’s cook, Jan Mohammad, who had brought him food, had served him milk. “Babuji left a hand-written note in his glass case which read that he had been given something in the milk, the telephone cord had been cut, no one was responding to the call bell; and all his staff had been sent elsewhere.”

Neera Shastri claimed that “woh tukda Amma ko mila thaa” (That note was found by Lalita Shastri). Amma told me personally about it. When I asked her what happened to that note, she said I have kept it with your ‘bade jijaji’ (elder brother-in-law).”

Anil, however, denied any knowledge of this note but said that he had heard from others about it. “I was only 15 then and my elder sister was about 15 years older than me and her husband was about 20 years older to me. I heard about it from others, but we never discussed this issue.”

Meanwhile, Neera added that when the body reached Delhi, no post-mortem was performed despite the mysterious circumstances in which the death took place. All the children in the family, she said, were too young then to take any major decision. “There was also talk of international pressure and national interest. Ammaji was also in a state of shock. She was also offered a position in Rajya Sabha, but she said she would prefer to be remembered as a former prime minister’s wife.”

Neera added “Shastri ji was loved by the people and till today even the Congress workers treat us with great respect. Members of his family are also devoting their time to public service, having truly imbibed the capability and integrity with which Shastri ji used to serve the nation. However, the political parties are yet to give them their due.”

Recalling how Lal Bahadur Shastri was a “simple person, who would even accept criticism gracefully,” she said, “he paid the price of his truthfulness, honesty, goodness, devotion towards national and people’s interest with his life.”

“He was murdered openly in a foreign country but the issue never got raked up and no questions were asked,” she charged.