The state has been in the news for attacks on media and journalists over the years.

New Delhi: A committee headed by former Supreme Court Justice Aftab Alam has drafted a Bill for the protection of media persons in Chhattisgarh. The committee was formed in February to draft a Bill that would protect freedom of speech and expression of media in the state.

The Bill prescribes imprisonment of up to one year if a public servant wilfully neglects his/her duties required to be performed under it. If enacted, offences under this Act will be investigated by a police officer not below the rank of deputy superintendent and shall be cognizable and bailable.

However, according to a member who requested anonymity, this is not the final draft. “We will seek suggestions from journalists and media organisations such as the Press Council of India and Editor’s Guild of India before giving it the final shape,” he informed The Wire.

According to the draft Bill, which is called the “Chhattisgarh Protection of Mediapersons Act”, within 30 days of the coming into force of this Act, the government shall constitute a Committee for the Protection of Mediapersons. The state-level committee will deal with complaints of harassment, intimidation or violence, or unfair prosecution and arrests of mediapersons. It shall be comprised of a police officer not below the rank of additional director general of police, head of the department of public relations and three mediapersons of at least twelve years’ standing, at least one of whom shall be a woman. As per the draft, mediapersons will be appointed as members of the committee for two years and shall not hold office for more than two consecutive terms.

Chhattisgarh has been in the news for attacks on journalists and media over the years. According to a report published by media watchdog website The Hoot in 2017, police took action against 13 journalists in Chhattisgarh, the highest in the country. During the assembly election last year, the Congress party – then in the opposition and now ruling the state – had promised in its manifesto that a law will be brought for the protection of journalists if voted to power.

Commenting on the latest development, senior journalist and leader of Patrakar Suraksha Kanoon Sanyukt Sangharsh Samiti Kamal Shukla said, said he has not seen the draft. “Until we see the draft Bill, I will not be in a position to comment about it,” he told The Wire.

According to Shukla, there has not been any significant change under the Congress as far as the safety and security of journalists is concerned. He said that after Bhupesh Baghel became the chief minister, at least 22 journalists have been charged and six were sent to jail, of whom three were brutally beaten.

He expressed concern over the delay in the enactment of the law, pointing out that the Congress had promised to bring in the law within 100 days of forming the government. “It has nearly been a year and the law has not been passed yet. The committee has not met any local journalists before preparing the draft,” Shukla said.

However, a source close to the committee claimed that a team appointed by Justice Alam visited Chhattisgarh and interacted with local people. Ruchir Garg, media advisor to CM Baghel, who is also a member of the committee which drafted the Bill, said the government is committed to bringing in the law and is “seriously working towards it”. “There is no doubt about the seriousness. It is taking time because it is an important legislation and the committee is looking into each and every aspect of the matter,” Garg told The Wire.

The Bill also prescribes the establishment of Risk Management Units in every district. These units will comprise the district collector, district public relations officer, the superintendent of police and two mediapersons of at least seven years’ standing, at least one of whom shall preferably be a woman, ordinarily a resident of that district. The collector and district public relations officer will act as chairperson and member secretary respectively.

“It shall be incumbent on every member of a Risk Management Unit, immediately on receipt of complaint or information of threat of harassment, intimidation or violence to persons in need of protection, to relay the complaint or information to the District Collector or the Superintendent of Police, who shall then, without any delay – a. institute such Emergency Protection Measures as may be required, and b. convene the Risk Management Unit.”

According to the draft, after “the Risk Management Unit has determined that protection measures will be required, it shall formulate a Protection Plan to safeguard persons who require protection at the earliest and in any event within 15 days of receipt of the complaint or information.”

It also prescribes that the Protection Plan and the Emergency Protection Measures “will be deployed in consultation with the person who requires protection except where the nature of risk or threat to that person is so pressing that there is no time for consultation.” 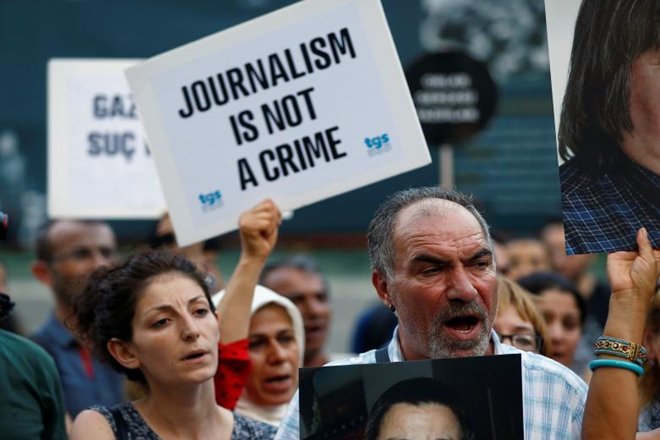 Chhattisgarh has been in the news for attacks on journalists. Representative image. Photo: Reuters

Who will be granted protection?

The draft law says protection has various qualification for those who will be provided protection. It defines mass media as “any means of communication used regularly for purposes of dissemination of information and expression of views and opinions, including digital media, such as news portals, web magazines”. Protection will be granted to mediapersons who have published six articles in mass media in the preceding three months and also to those who received three payments from media establishments for compiling news in the preceding six months or took photographs that have been published in mass media three times in the preceding three months.

Columnists or freelancers whose work has been published six times in mass media in the preceding six months or, reported news or views for mass media six times in the preceding three months, will also be protected. Mediapersons who have a valid identity card or a letter certifying that the applicant is currently employed by a media establishment will also be granted protection.