The Centre's interlocutor, R. N. Ravi, is to reach Dimapur in Nagaland on October 23 to have the first detailed meeting with six Naga political groups to help reach an accord. 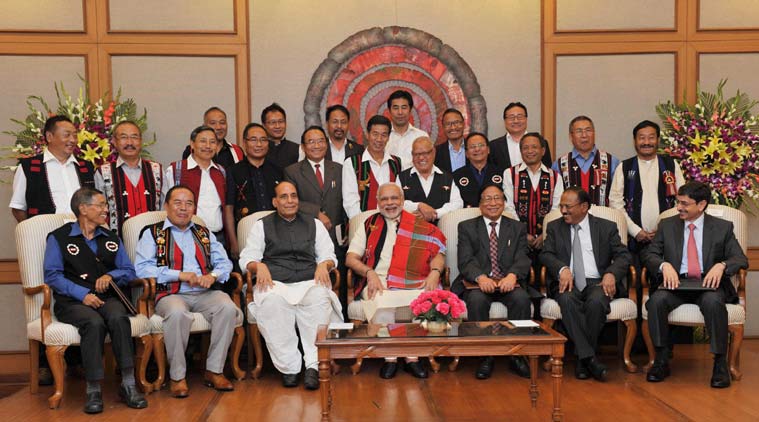 New Delhi: More than two years after the Narendra Modi government signed a “framework agreement” with the National Socialist Council of Nagaland (Isak-Muivah) in New Delhi to arrive at a peace accord that solves the over six-decades-old Naga issue, there comes a significant development that may help reach the intended goal.

The Centre’s interlocutor R. N. Ravi is scheduled to arrive in Dimapur town in Nagaland on October 23 to formally hold the first detailed meeting with the representatives of six influential Naga rebel groups, thus widening the scope of the talks conducted so far with only NSCN (I-M).

This meeting with the Naga National Political Groups (NNPGs) – important stakeholders in the fight for the rights of the Nagas – is being seen in Nagaland as “an official commitment of the India government” to make the peace talks “more inclusive” and therefore, more likely to bring lasting peace in the region.

A Tangkhul Naga from Manipur, veteran NSCN (I-M) leader T.H. Muivah, heading the ongoing talks, is often seen by many Naga tribes and their bodies in Nagaland as an “outsider” and not truly representing their voice.

Theja Therie of Naga Tribes Council (NTC), who will chair the first session of tomorrow’s meeting open to public, told The Wire from Dimapur that Ravi is set to arrive at Dimapur airport around 12 noon.

“He would thereafter proceed to the venue in Dimapur’s Chumukedima area to meet the working group of the six NNPGs along with prominent members of the Naga civil society. In the first session of the meeting, which will start around 2 pm, other stakeholder organisations, like the Eastern Nagaland Peoples Organisation (ENPO), NTC, Naga Gaon Bura Federation, would formally welcome the development and extend support to it.”

Therie said, “Thereafter, the working group of the NNPGs will engage with Mr. Ravi in a closed-door meeting.”

On December 14, 2016, these groups, at the behest of the NTC, came together in Dimapur to form a working group to usher in permanent solution to the Naga issue, thus showing their willingness since the framework agreement was signed in August 2015 to be a part of the ongoing peace talks.

This past September 27, at the invitation of the Centre, an 18-member group of the NNPGs, headed by the convener of the working group N. Kitovi Zhimomi, met Ravi for the first time in New Delhi.

Local media reports quoting Zhimomi then said, “The next round of talks will be held in Nagaland in October and is expected to touch serious and substantive issues.” Reports said Ravi urged the delegation “to be realistic and not dwell on rhetoric”. The closed-door meeting slated for October 23 is the outcome of the earlier meeting.

Though some media reports said Ravi, also the joint intelligence chief of the central government, had asked the working group of NNPGs to form a coordination committee and also prepare a charter of demands for the meeting, Therie told The Wire:

“As of now, the working group will conduct the meeting with Mr. Ravi. There will be no separate coordination committee for tomorrow’s talks. Also, whether to submit a charter of demands to him or not will depend on how tomorrow’s meeting proceeds, what kind of understanding takes place. So far, people are looking at this meeting as the first official commitment of India government to make the talks inclusive and bring other stakeholders to the peace process apart from NSCN (I-M).”

In April 2016, extending the ceasefire for a year with the Central government, Zhimomi, the NNPG convener set to lead tomorrow’s meeting, and a top leader of the armed group GPRN/NSCN (also known as NSCN-Unification), had said that the ongoing peace talks was “not suitable or acceptable comprehensively for the other Naga stakeholders” and the framework agreement “is an understanding between the Central government and the NSCN (I-M).”

Many expect a final solution to the Naga conflict by this December. Recently, Neiphu Rio, former Nagaland chief minister and the present Lok Sabha member of parliament from the state, told reporters that if the Naga solution comes before the assembly elections, which is slated for early next year, “then there will be an interim government for a brief period” and the polls would get postponed.  Powerful civil society groups like the Naga Hoho and ENPO have also called for a solution before the coming elections.