Centre Should Procure Vaccines For All. Anything Else is Contrary to Efficiency and Equity

Whose needs are greater: that of the Centre or the private buyer? How did the Centre arrive at such an arrangement? 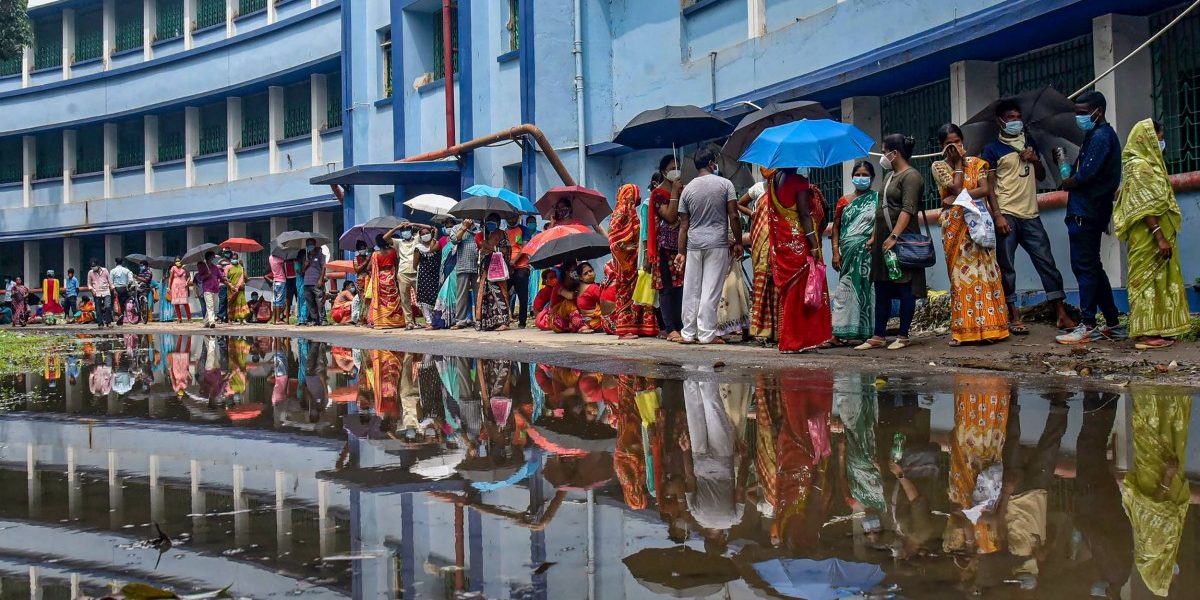 Beneficiaries wait to receive a dose of COVID-19 vaccine, at a district government hospital, Balurghat in South Dinajpur, Monday, May 31, 2021. Photo: PTI

The Centre must immediately adopt a policy of national uniform pricing of COVID-19 vaccines for procurement by the Government of India. They must accept the primary responsibility of purchasing and making available vaccine supplies to all states, enabling universal free vaccination.

The reasons are the following.

Firstly, vaccines against infectious diseases have positive externalities, i.e. with positive effects on the entire citizenry, the economy and reduced costs of morbidity and mortality. Nowhere in the world is a ‘public good’ priced for the public. It is free, available to all, because it is good for everyone. One person not vaccinated is a risk to others. It is, therefore, in the interest of the state and each citizen to be vaccinated. Globally, public financing ensures access to vaccines. Leaving it to market forces, or even competing forces among state governments within a large country, with millions of poor people (whose incomes have fallen after COVID-19), is both inequitable and inefficient.

For healthcare and essential service workers, and then for >60 years olds and for >45 year olds with comorbidities, GOI was procuring vaccines and supplying states. However, the GOI  changed its policy mid-stream (as per announcement on April 24, “Liberalised Pricing and Accelerated National Covid Vaccine Strategy”). GOI procured vaccines for the first two groups. Then, when it came to the turn of 18-45 year olds (around 600 million people), from May 1, the government allowed states and private purchasers to negotiate the price, and procure on their own.

Continued Central procurement is the preferred option. Price competition between states will be avoided. On the other hand, if individual states procure individually, as do private parties, manufacturers have already raised purchase price increasing cost to the tax payer. States and the GOI need every paisa to improve health infrastructure and human resources to meet citizens’ needs.

The Centre can reduce procurement price when bulk buying from few suppliers (who have oligopolistic power). That is why the continuation of Central procurement is the obvious strategy, which the Centre has abandoned, thus abdicating responsibility.

The fiscal capacity of states varies, so Central procurement will avoid inter-state inequity in access to vaccines. We already know that eight states account for 75% of vaccines administered. Some states have announced that they will provide free vaccinations to all adults. It may be possible for some states, but other states may have less fiscal space. This is already a cause of inter-state inequity, which will become worse, in the absence of Central procurement.

States could be edged out by private hospital chains and large corporate employers, since the latter will have a stronger ability to pay. Meanwhile, corporate manufacturers of vaccines will prefer to supply to private buyers, who will be paying a higher price. This can cause supply constraints for state governments.

There is no logic or basis for the Centre deciding that the 50% of vaccines that the Centre will not buy, will be divided equally between states and private buyers. Whose needs are greater: that of the Centre or the private buyer? How did the Centre arrive at such an arrangement?

Under current arrangements, states have had to internationally tender for vaccines. This would mean that states are competing with each other not only domestically but also internationally. This raises costs for states.

For the private sector, which is entitled to purchase 25% of vaccine supplies, there will be a greater buying power with corporate bidders, who will bid up price for all private sector bidders. So the current arrangement favours corporates hospital chains within the 25% private sector allocation, compared to smaller private players.

While contributing to inequity, it will lead to great inefficiency; in fact, compound it. First each state procures independently, then each state and each private chain will make logistical arrangements independently to enable distribution, raising costs and losing time, to get the vaccines and distribute them. At a time of a national health emergency, a once in century pandemic, when we need to achieve speed and efficiency, the GOI is compounding its own delays in placing advance orders on manufacturers (as the US and European governments did), by delaying vaccine delivery to citizens. This is like doing the groundwork for the third wave to arrive – after the prime minister already on January 28 announced to the world: we won the war against COVID-19. This is like rubbing salt into the wounds of citizens – while the second wave rages on, especially in rural areas.

The GOI already provides, under the Universal Immunisation Programme (since 1977), free of cost immunisation against 12 vaccine preventable diseases (plus sub-nationally for three diseases). The UIP is fully funded by the GOI. At the state level, the GOI funds them with the management of the cold supply chain as well as injection safety and waste disposal. Similarly, the National Vaccine Policy 2011 has the same objective (including technology transfer from multinational companies to develop products, use of Indian patent law to permit compulsory licensing in special situations). So clearly the GOI change in policy in 2021 in respect of COVID-19 vaccines – at a time of national emergency – is in violation of the National Vaccination Policy of the GOI 2011. It has to be revoked.

Multiple pricing – one price for the Centre, another for states (Covishield of Serum at Rs 400 and Covaxin of Bharat Biotech at Rs 600 for state governments; and Rs 600 and Rs 1,200 respectively for private hospitals) – is contrary to any logic or principle. It is totally at variance with anything the GOI has adopted for vaccinations before. To do it now, at a time of a national emergency, is to allow manufacturers to earn super normal profits, and smacks of suspicious motives on the part of the two parties that negotiated the deal.

The Centre invoked the Epidemic Act, the Disaster Management Act and the Essential Commodities Act, which gives the Centre overriding powers over state governments. Hence, it is the responsibility of the Centre to assist the states.

The Centre cannot suddenly claim that health is a state subject. If the Centre can without notice impose nationwide lockdown, without asking the states, then surely it can procure vaccines for all citizens.

Major developed countries which moved faster than India in ordering COVID-19 vaccines, have adopted a Central procurement model, with varying distribution mechanisms. Britain, Canada, the United States and the European Union have all followed similar strategies, pre-ordering doses — more than enough to inoculate everyone — from multiple makers, hedging their bets in case some vaccines are not approved or some manufacturers have production breakdowns. No country in the world has adopted the procurement strategy the GOI has adopted.

The African Union created an African Vaccine Acquisition Trust to make available up to 220 million doses of the vaccine produced by Johnson and Johnson to the African Union’s 55 member states starting July 2021. But the GOI has decided to leave India’s states to negotiate with both domestic manufacturers as well as international ones to acquire the vaccines for its people. Then the Central government has the audacity to defend its position in the Supreme Court of India.

Therefore, the GOI should revoke its April 24 announcement, and procure vaccines Centrally at the price it secured for itself. It should then distribute, in accordance with its own National Vaccine Policy to states, on a transparent basis. The health ministry’s secretary has said that 29,000 cold chain points, 240 walk-in coolers, 70 walk-in freezers, 45,000 ice-lined refrigerators, 41,000 deep freezers and 300 solar refrigerators are ready for use for the COVID-19 vaccine storage. The states will take responsibility for vaccinating its population.