The newspapers noted that the Central government had wasted precious time towards the end of last year to brace up for the second deadly wave. 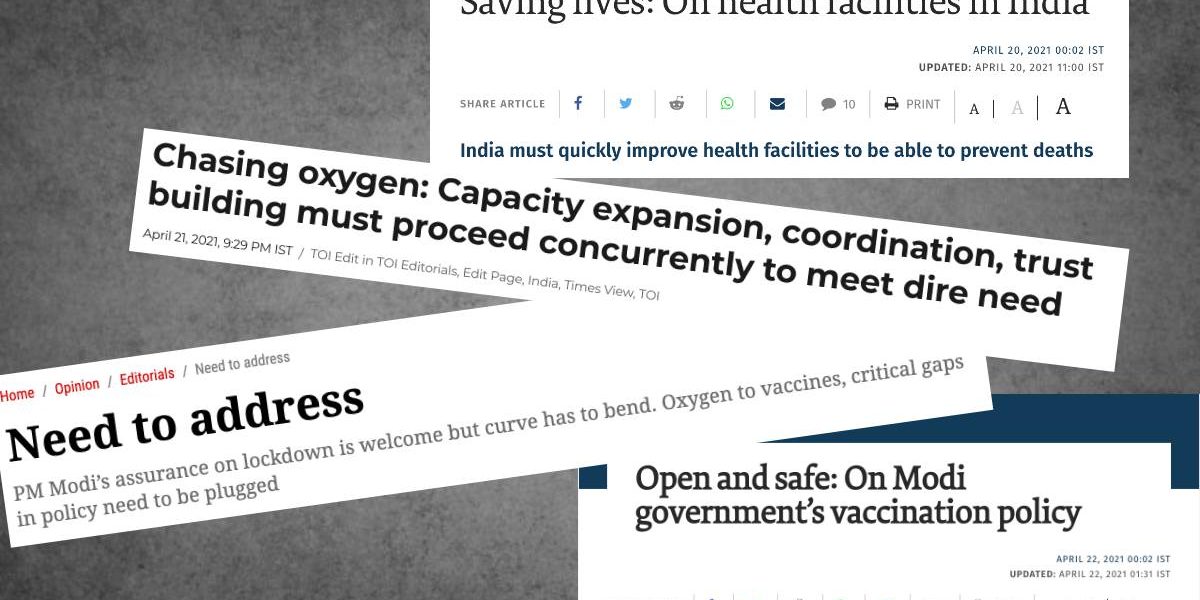 New Delhi: As India’s COVID-19 crisis deepens with a mad scramble for hospital beds, essential drugs and medical oxygen being reported from across the country, leading English newspapers in their editorials have highlighted how the Central and state governments have failed spectacularly in ramping up health infrastructure after India saw a dip in the number of cases towards the end of last year.

Citing the Union government’s reports, The Hindu in its editorial pointed out that it took as many as eight months for the administration to initiate steps to build oxygen generation plants that will reduce the reliance on pressurised liquid oxygen. As a result, only 33 of the 162 plants approved last year, sensing crunch in supply, have now become operational.

“Precious time was wasted before critical facilities began to be scaled up to meet the demands of the second wave that is accelerating at an unprecedented pace, leading to health-care facilities being overwhelmed; the number of deaths shows a sharp growth of 10.2%,” The Hindu observed.

Echoing the same that the administration was found napping when the secondly deadly wave hit the nation, The Times of India highlighted that the massive demand for medical oxygen has resulted in discord among the states, as every state began to vie with the other to procure supplies by whatever means and wherever possible. It slammed the Centre for not averting such a situation and for not working towards better coordination among states in using supplies.

The Times of India pointed at the instance of how an altercation has broken between Delhi and Haryana, and how Tamil Nadu has been objecting to the diversion of oxygen for the needs of neighbouring Telangana and Andhra Pradesh.

It squarely put the blame for the prevailing situation on the Centre as it was only waiting for things to turn worse without taking any pre-emptive measures.

“…[N]ot enough hospitals have added oxygen generation plants over the past year. More decentralised availability would have saved time, energy and expenditure incurred in sourcing and transporting liquid oxygen. When postmortems of the pandemic are done, state and central governments must answer for low public health budgets that failed such essential capacity-building investments during a pandemic,” The Times of India noted.

The Indian Express editorial picked holes in the vaccine roll-out plan and “discriminative” pricing announced by Prime Minister Narendra Modi that the Centre would procure 50% of the stock at Rs 150 per dose while making states to fend for themselves as they have to buy a single shot at Rs 400 from the open market. This, the editorial noted, will only lead to conflict between the Centre and states.

“Cash-strapped state governments are worried how they would compete with open-market players in sourcing the vaccines,” it noted.

It also said the economy will suffer, perhaps, even end up in dire straits if the government do not make efforts to bend the COVID-19 curve and address the grave health uncertainty facing the nation.

“This continuing health uncertainty will have grave consequences for the economy…Because for all the talk of a no-lockdown, no demand or economic activity will revive if the Covid curve doesn’t begin to bend,” the Indian Express editorial noted.

It said the situation can only be salvaged if an honest reckoning is made of the fact that the nation has been completely unprepared for what had to come.

“What is staring in all faces, however, is how the second wave has exposed the glaring inadequacy of health infrastructure in the country. Not only in remote rural pockets but in the heart of the national capital, New Delhi, and financial capital Mumbai…A just-in-time approach to replenishing oxygen supplies at hospitals will endanger lives,” it observed.

Also read: COVID-19 Surge: A List of Countries Which Have Banned or Curtailed Travel from India

The Hindu too talked about how the Centre’s vaccination rollout policy needed a reform. “The Centre’s latest policy has effectively opened the floodgates to an unregulated system with market-determined vaccine pricing. Rather than use monopsonist power to procure all vaccines for price-capped distribution, extending the model that has been in place since March 1, the move has led to a 266% to 400% price increase for Covishield for State governments and private hospitals, respectively.”

“Worldwide, governments have made COVID-19 vaccination a fully state-funded effort. The case for free market pricing for vaccines, on the ground that private enterprise is leading vaccine development, is overstated. For AstraZeneca-Covishield, the single biggest research funding component, at over £38 million, came from the British government, followed by overseas governments, universities and charities. What India needs is free universal vaccination, modelled on the polio campaign. The Centre cannot abdicate that responsibility,” The Hindu noted.