The notification allows offices to come up on plots housing National Archives and IGNCA to the north of Rajpath. 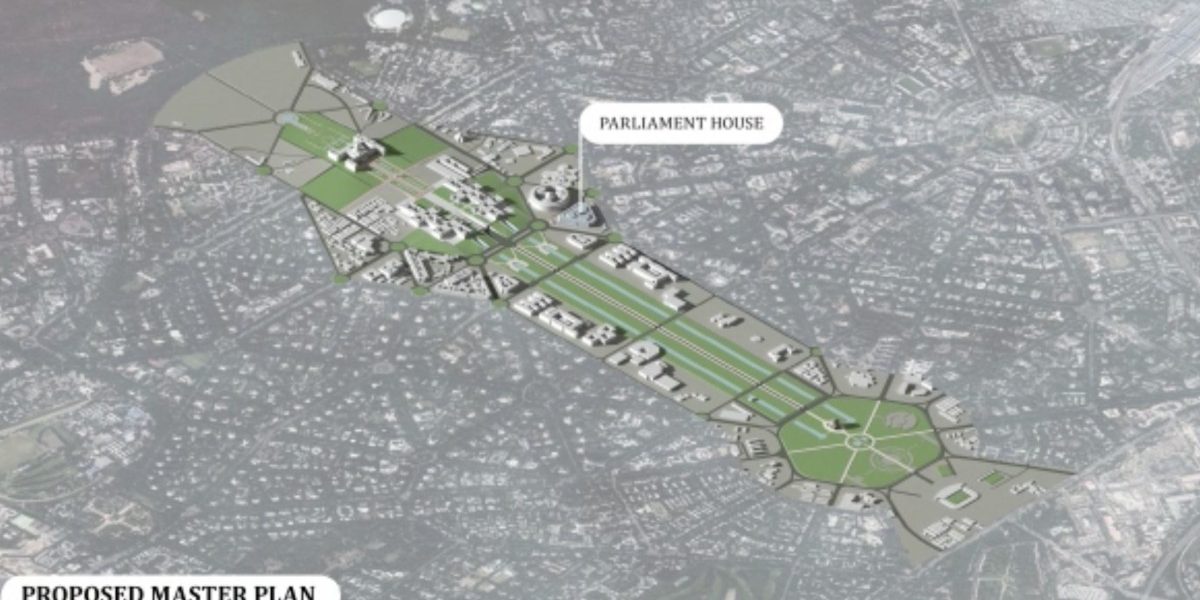 Screenshot from the walk through of the winning proposal for the Central Vista redevelopment project.

New Delhi: While most of the country (and the world) is focused on the coronavirus pandemic and how to limit it and government departments have put on hold all non-essential projects, the Ministry of Housing and Urban Affairs has gone ahead and issued a notification amending the land use of five plots for the Centre’s ambitious – and controversial – Central Vista project.

The notification gives a glimpse into the Modi government’ priorities even as the whole of India has gone into lockdown mode.

The project seeks to redevelop and reconstruct several historic buildings in a four-square-km area from the gates of Rashtrapati Bhawan to India Gate. The five plots for which the land use has been amended include where a new parliament house is proposed to be constructed, adjacent to the existing building, and another on which the new prime minister’s residence is to come up.

The notification, issued on March 20, stated that in view of the modifications which the Central government proposed last year in the Master Plan for Delhi-2021 and the Zonal Development Plan of Zone-D and Zone-C (for Plot No. 08 on the outer periphery of India Gate), the Delhi Development Authority had invited objections and suggestions.

It said 1,292 objections and suggestions were received with regard to the proposed modifications and were considered by the Board of Enquiry and Hearing, set up by DDA. Thereafter, the Centre decided to modify the MPD 2021 and the Zonal Development Plan which have since been announced through the gazette notification.

New parliament building to come up in ‘district park’

As per the notification, the new parliament house building will come up on a triangular plot, designated as Plot No 2, opposite to the existing parliament. Measuring 9.5 acres, the plot being allotted for it was a ‘recreational (district park)’ under the earlier land use.

Incidentally, in August last year, Prime Minister Narendra Modi had spoken about how a new parliament building may be constructed by 2022, when India would celebrate its 75th year of independence.

Earlier, in 2015, then speaker Sumitra Mahajan had written to then Union urban development minister M. Venkaiah Naidu urging him to initiate measures to construct a new parliament building as the existing building was in distress and not able to meet the growing demands of staff, security, media visitors and parliamentary activities.

The parliament building was designed by British architects Edwin Lutyens and Herbert Baker and its construction was completed six years after it began in 1921. The building housed the Imperial Legislative Council before independence.

The gazette notification also paves the way for changing the nature of buildings to the north of Rajpath. While the British had planned to have buildings of socio-cultural important all around the intersection of Rajpath or ‘Kingsway’ and Janpath or ‘Queensway’, the new Central Vista project seeks to change this.

The new gazette notification would impact two such premises on Dr. Rajendra Prasad Road – one that houses National Archives and the other across Janpath that houses Indira Gandhi National Centre for the Arts.

The second change made through the notification relates to the 7.7 acre plot located on Dr. Rajendra Prasad Road, which at present houses the National Archives. Following the notification its use is sought to be changed from ‘public and semi public facilities’ to a `government office’, measuring 5.88 acres and a recreational district part measuring 1.88 acres.

The land use of another plot at the intersection of Janpath and Dr. Rajendra Prasad Road, which at present houses the Indira Gandhi National Centre for the Arts, has also been changed. On this 24.7 acre plot that was earlier meant for ‘public and semi-public facilities’, the land use has been changed to provide the coming up of government office measuring 22.82 acres and a `recreational (district park)’ measuring 1.88 acres.

The fourth plot whose land use has been changed is spread over 4.5 acres and is bound by Man Singh Road on the west and Ashoka Road in the north. It too was earlier meant for ‘public and semi public facilities’ and has now been cleared to house a `government office’.

The DDA has also changed the use of a 15 acre plot located north of Dalhousie Road near South block from ‘government office’ and ‘recreational (neighbourhood play area)’ to residential. It is believed that this plot, which has Rashtrapati Bhawan to its west, will house the new prime minister’s residence.

Incidentally, the plan has for the time being only reflected on the new parliament, PM’s residence, and office buildings that are proposed to be constructed on the northern side of Rajpath. While a new Prime Minister’s Office, a new residence for the vice-president and offices along the southern side of Rajpath are also there in the Central Vista plan, the Master Plan amendment notification issued by the DDA has not covered them yet.

After the Central Vista plan was announced a number of architects, urban planners, historians and conservationists had come together under the banner of Lokpath to denounce the move saying it not only unnecessary tinkered with historical buildings, but was result in wasteful expenditure running somewhere around Rs 20,000 crore. They had also questioned the opacity, silence and haste around the project.

A senior architect and one of the founders of Lokpath, Narayan Murthy, also circulated an online poster on the “questionable priorities” of the Centre as it set out to spend Rs 20,000 crore on “needless construction” instead of using it for the fight against novel coronavirus or COVID-19. Another online poster issued by the group said the same amount of money could have been better used for setting up 15 new AIIMS and improving the medical facilities in the country. Posters by Lokpath on the Central Vista project.