'If People Can't Breathe, What Will They Do With a New Parliament?'

Families of COVID-19 patients are angry with the government's focus on the vanity project even as the pandemic crisis continues. Healthcare workers assist a COVID-19 patient out of an ambulance outside a south Delhi hospital. Photo: Tarushi Aswani

New Delhi: Reshmi stands next to a body covered in white shroud laid on a stretcher. As the hospital guards question the purpose of her arrival, she says, “I have just come for a death certificate for my father, please let me in.” Pushing her father’s body with healthcare workers, Reshmi’s isn’t crying anymore. But her eyes reveal a deep-seated disappointment.

The second wave of COVID-19 in India has mandated several lockdowns and curfews, which severely restricted livelihoods across the nation. In Delhi – which was hit hard and saw a very high number of both infections and deaths – a lockdown was imposed on April 19. Only ‘essential’ services were allowed to operate; many shops, eateries, businesses and services shut down adhering to the guidelines. The guidelines mandated that only construction projects with on-site accommodation for workers were permitted to operate. A glaring exception, thought, was made for the Narendra Modi’s passion project – redeveloping the Central Vista. This project was declared an “essential service”.

Between chasing doctors and arranging oxygen cylinders for his brother-in-law, Rohan says this is the third hospital in 15 days that he has admitted the patient to – from Palam Hospital, to Lok Nayak Hospital, to now Al Shifa Hospital. The government, Rohan says, has no clue about what is happening on ground zero. Reacting to the relentless construction of the Central Vista, he says, “Raat ko 2 baje se 3 ghante line mein lag ke, black mein lia oxygen cyclinder, khud toh yeh log ghar baith kar kanoon paas kar rhe hain (I stood for three hours in a line at 2 am only to buy an oxygen cylinder at black market rates, and these people are just sitting at home and passing orders).”

In this environment of death and dismay, he says, “At this time, people are making opportunities out of our problems, charging 5-10 times the price for injections, oxygen, medicines and what not. It is very frustrating to have no one to count on, our loved ones are more important to us, but for the government, the show must go on!” 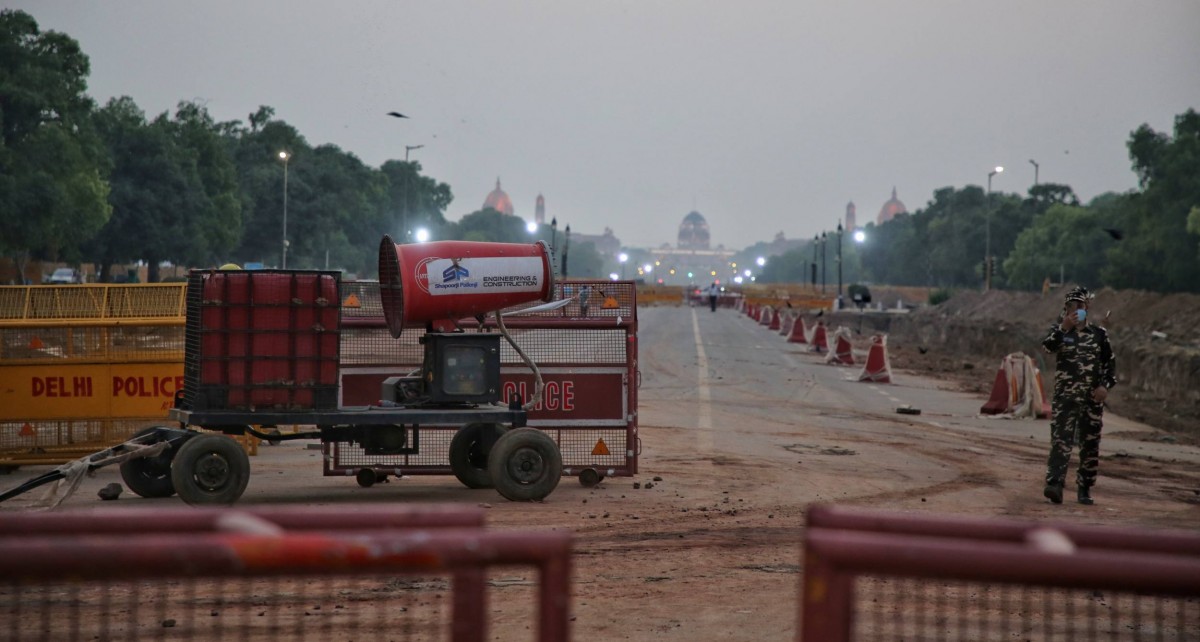 Another patient’s attendant, Rahul Gehlot, is waiting patiently outside the emergency room for the doctor’s diagnosis of his COVID-19-positive mother-in-law. Gehlot has been to five hospitals in a week in search of an ICU bed and returned empty handed from all of them. She is currently admitted in the emergency ward, Gehlot says. He is just praying that the hospital somehow manages to admit her to an ICU room because she is not in a condition to travel anymore.

“The government is just concerned about selfish gains; the last seven years have only been of loot by them. I still remember Prime Minister Manmohan Singh said, ‘If Modi is elected, it will be a disaster ’,” said Gehlot eyeing a doctor who seemed familiar, in the hope of good news.

Prabhjot Singh’s mother has been battling COVID-19 for 20 days now. After being kept in the emergency ward due to the shortage of beds and receiving little treatment, he now hopes his mother will recover. Talking to The Wire about the Central Vista project, he said, “It should not have even been in discussion during COVID-19. I’ve been with my mother here, and I see that many patients arrive at the hospital and even before they make it through the formalities, they are declared dead. Why is it so important to engage in elections, image building even in such times?”

Krishan Kumar’s struggle to get his father admitted to a hospital has ended only recently. From running to hospitals only to be declined admission due to the overflow of patients, Kumar finally found space in Holy Family Hospital where his father was administered medical oxygen on a wheelchair for 13 hours, post which he was admitted to the emergency ward and then the COVID-19 ward a day later. “Failure hai, poora failure hai, inhonay kuch nahi seekha ek saal mein (It’s a total failure, they learnt nothing from the last year),” says Kumar, hesitating to openly name the Central government.

Sitting outside Al Shifa Hospital’s COVID-19 ward, Nasir is caught in a stupor. His eyes are glued to the window of the ward’s door, waiting to steal one glance of his ailing mother. “Jab logon ke paas saans hi nahi rahegi, toh parliament ka wo kya karenge? (When people aren’t even able to breathe, what will they do with the parliament?)”

Also read: The Shades of Populism in Narendra Modi’s Politics of Infrastructure

It was only with the help of an NGO, Nasir says, that they were able to get his mother to a hospital in time. However, the hospital refused to admit his mother or even administer oxygen to her as her saturation levels dipped to 75. He then adds, “Saans ko nahi, sansad ko tarji di gayi hai (Parliament has been given priority, not people).” According to him, the hospital had even refused to test his mother for the novel coronavirus, citing overcrowding. Nasir also explained how he feels that more than the bricks that make up the Central Vista, it is people who make up the nation who need the government’s investment.

On May 7, the Supreme Court urged the Delhi high court to consider the public interest litigation (PIL) filed by petitioners Anya Malhotra and Sohail Hashmi seeking a stay in construction work of the Central Vista project. On May 12, leaders of 12 opposition parties wrote to Modi demanding a free universal vaccination campaign for COVID-19 and seeking the suspension of construction for Central Vista project.

The Delhi high court has reserved its judgment on the PIL, and it remains to be seen whether it will say construction work should be halted while the pandemic is brought under control. For those suffering from COVID-19 and their families, however, it’s an insult that this question is even being considered.