The intelligence community in the Valley has been taken by surprise that Shia mourners did not protest against raising of banners supporting Burhani Wani of the Hizbul Mujahideen, principally a Sunni militant outfit. 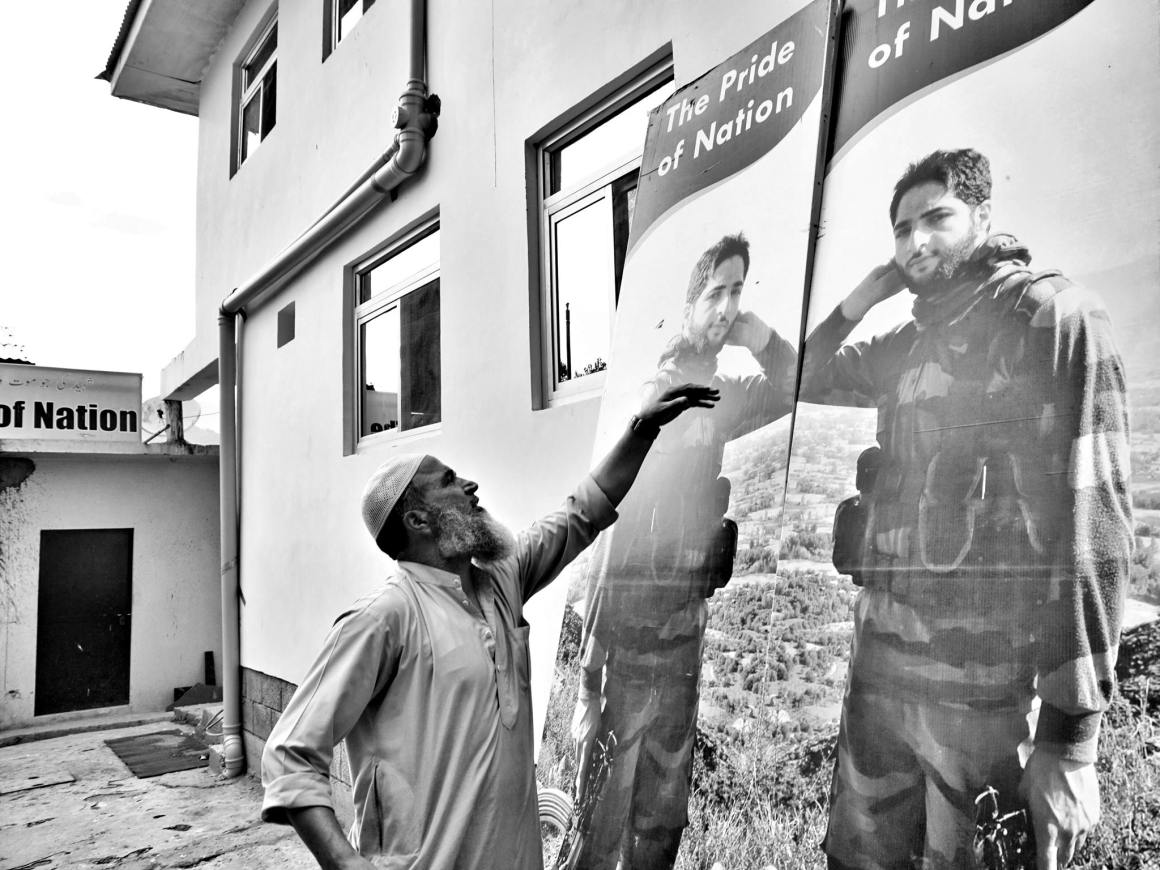 Muzaffar Wani looking at the poster of his son, Burhan, at his house in Tral district of South Kashmir. Representative image. Credit: Shome Basu/ The Wire

Srinagar: Muharram, which commemorates the martyrdom of Prophet Muhammad’s grandson Imam Hussain, passed without a major incident in Kashmir barring few incidents of violence during the processions. The authorities, however, have become apprehensive in its aftermath, as multiple sections of Shia mourners also commemorated slain militant commander Burhan Wani of the Hizbul Mujahideen, principally a Sunni militant outfit.

Wani was gunned down in an encounter in south Kashmir on July 8, 2016, triggering Valley-wide protests in which more than 100 civilians were killed.

A senior police officer in Srinagar, requesting anonymity, told The Wire that that the department was in possession of multiples videos and photographs showing mourners either raising banners and posters of Wani or praising his “martyrdom”.

The officer said five areas in Srinagar and Budgam districts have been identified where Wani was commemorated, including Chowdhary Bagh, Naid Yar, Rainawari and Chinkara Mohalla Habbakadal. At least another dozen videos, most of which are on social media, show mourners raising pro-Pakistan, pro-azaadi and pro-Wani slogans

The officer told The Wire that not only is the development significant, but has also taken the intelligence community in the Valley by surprise. “As of now, there is no official enquiry into organisations or individuals responsible for putting up the posters and banners (of Wani). We have received multiple photographs and videos taken during the processions that include banners and posters of Wani and in some, individuals are speaking to crowds about Wani’s struggle against security forces,” said the officer. 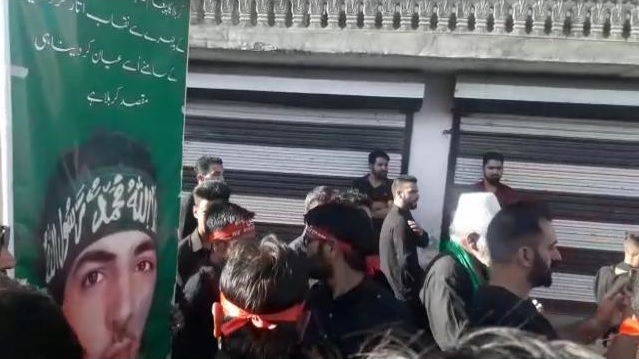 “We shouldn’t generalise an entire community based on acts which could have been perpetrated by a few individuals. But what is disturbing is the fact that there wasn’t any protest over the presence of Wani’s posters or the speeches that were made in his favour,” the officer added.

Another senior government functionary also acknowledged that the top rung of the establishment in Kashmir has taken note of the development.

Masroor Abbas Ansari is a Shia leader and the president of Jammu and Kashmir Ittehad-ul-Muslimeen, one of Kashmir’s prominent Shia groups. He spoke to The Wire about the history of the ban on Muharram processions in Kashmir and the new phenomenon that seems to be changing the nature of the processions.

“History of Muharram processions in Kashmir dates back to the 15th century. Historical accounts suggest it was never a problem then. In 1977, a formal agreement was signed between Sheikh Mohammad Abdullah and different Shia groups and the procession routes were decided. But after the eruption of militancy, the agreement was broken,” Abbas told The Wire.

Muharram processions in Kashmir were banned by the establishment in 1990, a year after an armed insurgency broke out in the Valley. Attempts by Shia Muslims to participate in processions have since been clamped down.

The government’s apprehension that Muharram processions could turn into anti-India demonstrations was the reason for the ban. Twenty-eight years later, the processions have evolved into something entirely different.

While azaadi slogans have occasionally been raised in the processions, commemorating the figurehead of a Sunni Muslim militant outfit is a first in Kashmir.

“Various speeches remembered the sacrifice made by Wani. His posters were raised along with that of Hassan Nasrallah. Wani remains to be a symbol of resistance. The struggle against Yazidi rule will continue,” Abbas said.

Yazid ibn Muawiya commonly known as Yazid, was the second caliph of the Umayyad caliphate under whose command Ubayd Allah ibn Ziyad, an Umayyad governor, ordered the Battle of Karbala in which family and companions of Imam Hussain were killed, thus splitting the Muslim community into two sects. Shia Muslims have since viewed Yazid ibn Muawiya as symbol of tyranny and oppression.

Another senior police officer said during the procession, the security forces were referred to as “Yazidi Lashkar” (Army of Yazid) is symbolic and can only spell trouble.

“The battle of Karbala was about the struggle between the descendants of Prophet Muhammad and those who tried to impose despotic monarchy within Islam,”said Shiekh Showkat Hussain, a Kashmir-based political analyst who tried to contextualise Wani’s commemoration. He said the “resistance” in Kashmir has now transcended sectarian lines.

“Karbala signified the struggle between freedom and despotism. It has been used to contextualise every struggle in Muslim lands and Kashmir is no exception. This is probably why the government has imposed a ban on Ashura processions,” said Hussain, who termed the commemoration of Wani as a “notable development”. 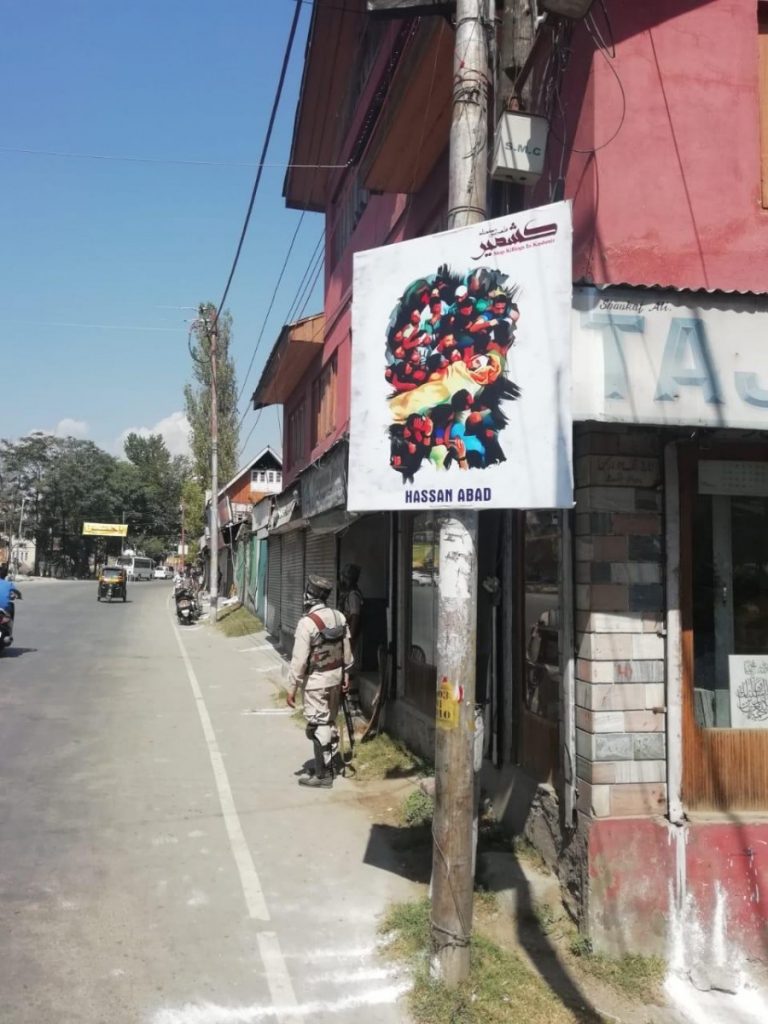 “One must also not forget that an overwhelming majority of Sunni Muslims supported Mohammad Ali Jinnah during the pre-partition days, despite his affiliation with the Shia Ismaili sect,” he added.

Senior police officers might disagree with Hussain’s interpretation, but acknowledge that the commemoration is noteworthy. One officer said that earlier, police and the administration acted as a buffer between the state and separatists/militants, but the buffer zone is now disappearing.

“Earlier, there were moderate elements within the separatist circles, with whom back channel negotiations pertaining to a variety of issues was possible. In fact, when there were some 20,000 active militants in the Valley, many back channels were open with militant commanders. Now, with just over 300 militants operating, the back channels have disappeared,” said a senior security officer, requesting anonymity.

New Delhi based Ajai Sahni is the founding member and executive director of the Institute for Conflict Management. He has also acted as an advisor to the Ministry of Home Affairs and has followed the Kashmir insurgency for the past 30 years. Sahni believes that Wani symbolism in Muharram processions should be seen in the context of impending  elections.

“Municipal body polls, general elections as well as state election are due. Polarisation is on both ends. If you ask me, raising Wani banners is not an important development because there has hardly been any schism between Shias and Sunnis of Kashmir. In fact, there has been Shia representation in all separatist groups as well as militant outfits,” said Sahni.

“What really is a matter of concern is the recent statements of the National Security Advisor’s (NSA) office on Article 35A, which can only complicate the Kashmir situation. NSA taking the position of a political party is unprecedented,” he said. He was referring to NSA Ajit Doval’s statement that a separate constitution for J&K was an ‘aberration’.