Within just three years of coming to power, the BJP government has already named a large number of schemes after some of the prominent leaders of the Sangh.

The agenda of the BJP appears clear: it wants to obliterate the Nehru-Gandhi legacy and replace it with its own, by propagating the values and ideals its leaders stood for.

The Bharatiya Janata Party, which was known to attack the Congress for naming all its schemes  and after its leaders, is now doing exactly the same.

Within just three years of coming to power, the Narendra Modi government has already named a large number of schemes after some of the prominent leaders of the Sangh, namely Deen Dayal Upadhyaya and Syama Prasad Mukherjee. This has often led to acquisitions that some of the schemes being renamed after the BJP’s leaders were started during the Congress era.

Schemes named after the Nehru-Gandhi family being rechristened

About ten days ago, senior Congress leader Digvijay Singh had charged that the Saubhagya Yojana for providing substitution to kerosene and improving educational and health services – announced by Modi on September 25 to mark the centenary celebrations of Upadhyaya – was not a new project and in fact, had been named after former Prime Minister Rajiv Gandhi earlier.

Singh had alleged that “the name of the yojna has been changed from Rajiv Gandhi to Deen Dayal Updhayaya” and that Modi had only tweaked the name of an old scheme which was functional under the Congress rule as well.

Incidentally, there appears to be a design by the BJP government behind changing of names. While presenting the Union Budget in 2016, the Centre had clearly indicated that it had dropped Rajiv Gandhi’s name from four schemes and had subsumed a rural electrification scheme named after Gandhi in a broader scheme that is named after Upadhyaya.

This latest episode has just gone to show that the BJP government is not one with a difference when it comes to seeking credit and that it would rather follow in the footsteps of its predecessor.

BJP creating its own dynasty after chastising Congress for it

In 2015, then senior BJP leader and now Vice-President Venkaiah Naidu, while defending the party’s decision to construct a grand statue of Sardar Vallabhbhai Patel, had questioned why the Congress always named schemes and structures after a few select leaders.

Citing a query filed under the Right to Information (RTI) Act, he had noted that there were around 450 different schemes, projects and institutions which were named after the Nehru-Gandhi family members. Naidu had cited that there were 12 central and 52 state schemes, 28 sports tournaments and trophies, 19 stadiums, five airports and ports, 98 educational institutions, 51 awards, 15 fellowships, 15 national sanctuaries and parks, 39 hospitals and medical institutions, 37 institutions, chairs and festivals and 74 roads, buildings and places that were named after Jawaharlal Nehru, Indira Gandhi and Rajiv Gandhi alone.

But the BJP, too, recently made it clear that apart from naming its schemes after its senior leaders, it will also teach school children about Veer Savarkar, Upadhyaya, K.B. Hedgewar, Mukherjee and Nanaji Deshmukh. To this end, a 70-page booklet was released by BJP president Amit Shah on August 1 this year for circulation in schools across Uttar Pradesh. About seven lakh copies of the booklet were printed for distribution.

Agenda is to replace Nehru-Gandhi with its own

The agenda of the BJP appears clear: it wants to obliterate the Nehru-Gandhi legacy and replace it with its own, by propagating the values and ideals its leaders stood for. This is particularly why many find it difficult to comprehend that President Ram Nath Kovind’s omission of Nehru’s name in his maiden address on taking oath was a mere slip-up.

The issue of BJP trying to usurp Congress policies has also been hogging the limelight for sometime now. In June this year, Congress leader Shashi Tharoor had claimed that the BJP had renamed 23 schemes floated by the Congress. A fact check of the claim by a website had revealed that he was right about at least 19 of them.

Upadhyaya’s year-long birth centenary celebration has triggered a slew of schemes named after him, the latest being on October 4 when the Kandla Port was renamed Deendayal Port. On September 23, 2016, two days before the centenary celebrations were to begin, Modi had approved the constitution of two committees to commemorate the party’s ideologue. 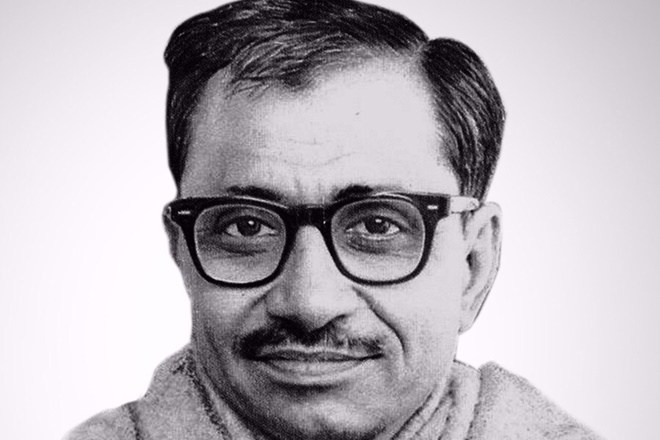 Apart from the Centre, various BJP-ruled state governments have also taken the lead in naming schemes or structures after party ideologues. In August this year, despite strong protests, the Yogi Adityanath-led government in Uttar Pradesh renamed the iconic Mughalsarai railway station to Deendayal Upadhyaya station.

In Madhya Pradesh, the Shivraj Singh Chouhan government launched a subsidised Deendayal kitchen scheme in April this year, that was to provide cooked meals at Rs 5. The state government had earlier made it compulsory for all government advertisements to have Upadhyaya’s photograph. Going even further, its Makhanlal Chaturvedi National Institute of Journalism and Mass Communication has replaced studies on Nehru with those on Upadhyaya.

In Haryana, which elected its first BJP government in 2014, a statue of Upadhyaya was unveiled at the Raj Bhavan in July this year. The state, ruled by Manohar Lal Khattar, is now planning to install a 51-feet statue of Upadhyaya at the Dabchick tourist complex at Hodal and is setting up a park in Faridabad named after Upadhyaya. Kurukshetra University has decided to undertake research on the life and philosophy of the late leader while the state government has drawn up plans to set up Pandit Upadhyaya Yuva Vikas Kendras.

Assam, which became the first state in the northeast to elect a BJP government, has announced that it will set up five colleges, all named Pandit Deendayal Upadhyaya Adarsh Mahavidyalaya. The announcement was made by its education minister Himanta Biswa Sarma in August this year.

Clearly, the BJP, by renaming schemes and structures, is trying to influence young minds for years to come. History shows that such an exercise is not a guarantee for perpetuity and continued support from the masses – a point the saffron party clearly fails to understand.