Aspirants for defence jobs are reportedly amongst the agitators. So far demonstrations have seen road and rail traffic blocked, with tyres being set on fire. 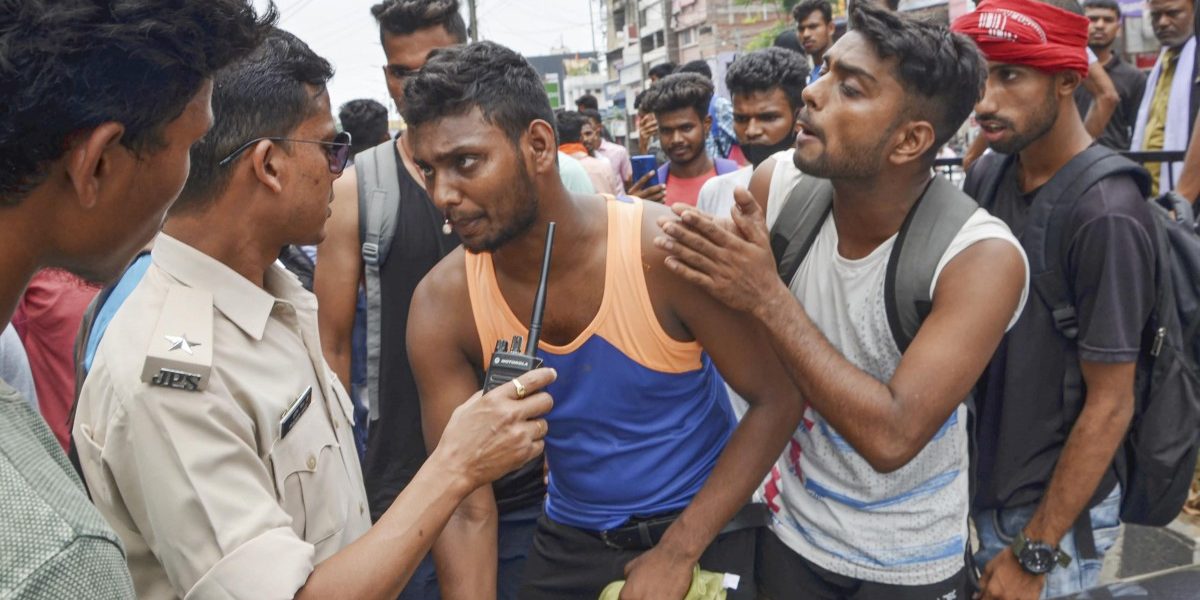 The protests had initially broken out on Wednesday with agitators asking as to what would happen to them after the contract period in the scheme expires. Now, the protests have reportedly spread to other states as well, with neighbouring Jharkhand and Uttar Pradesh witnessing some demonstrations against the scheme.

Aspirants for defence jobs were reportedly amongst the protestors as demonstrations blocked road and rail traffic. Violence and destruction of public property was also reported from several areas.

A passenger train was set ablaze at the Bhabua railway station in Bihar’s Kaimur district reportedly by defence aspirants. Even as police personnel were present at the scene, hundreds of youths chanted slogans against the contractual recruitment scheme, smashing the trains windows and eventually setting it on fire.

They say, “We prepared for long&now they’ve brought ToD (Tour of Duty) as a 4-yr job.Don’t want that but the old recruitment process” pic.twitter.com/TmhfnhHiVg

In Jehanabad, hundreds of protestors blocked National Highway-83 and burned tyres on the streets demanding the Union government withdraw the scheme. Moreover, protestors were reportedly seen pelting stones at the police as they tried to disperse them. According to a report by NDTV, the police, too, engaged in stone pelting and reportedly trained their guns at the protestors in an attempt to scare them.

Young defence aspirants can even be seen doing push-ups on roads and railway tracks to demonstrate against the recruitment scheme.

Some reports say trains and other public property were damaged.

Bihar A huge crowd gathers in protest in #Nawada, against the recently announced #AgnipathRecruitmentScheme for armed forces. pic.twitter.com/fHCll1OxZ1

At the Arrah railway station, protestors reportedly threw scooters and furniture onto the railway track and set them ablaze. They even reportedly pelted stones at the police, in response to which the authorities used tear gas to disperse the crowds.

Baton-wielding protestors and tyre-fires were also seen in other parts of the state, such as Chhapra in the Saran district. In one video, the protestors, shouting slogans and holding placards calling for the boycott of the scheme, can be seen smashing a bus with sticks.

#WATCH | Bihar: Youth demonstrate in Chhapra, burn tyres and vandalise a bus in protest against the recently announced #AgnipathRecruitmentScheme pic.twitter.com/Ik0pYK26KY

Under the Agnipath scheme, approximately 45,000 youths between the ages of 17-and-a-half and 21 will be recruited into the Indian Army, Navy and Air Force on four-year contracts. After the four-years are up, however, only around 25% of these ‘Agniveers’ will be retained and go on to serve the full 15 years.

What’s more, the individuals who are not retained will be given a package of Rs 11-12 lakh at the end of their tenure, however, they will not be entitled to pensions.

Currently, under the short service commission, the Indian Army recruits young Indians for an initial tenure of 10 years which can be extended to 14.

The Agnipath scheme was aimed at reducing the expenditure the tri-forces incur through having to pay salaries and pensions to a large number of soldiers. As such, the schemes is aimed at slashing pension expenditures.

The scheme has, however, drawn criticism from several corners, including army veterans. Even retired Major General G.D. Bakshi, thought to be a supporter of the Narendra Modi-led Bharatiya Janata Party government, took to Twitter to express his disappointment.

Was flabergasted by the Agniveer scheme. I thought initially it was a trial being done on a pilot basis. this is an across the board change to convert Indian armed forces to a short tenure quasi- conscript forceLike the Chinese. ForGods sakePLEASE DONT do it

In a series of subsequent tweets, Major General Bakshi went on to detail his various objections to the scheme, claiming that it was taking India in the direction of the Chinese Army, citing the example of the current war in Ukraine where he claims conscripts are the weakest link, and highlighting the possibility of trained soldiers being forced to join terrorist organisations if not absrobed into the forces.

Similarly, other armed forces veterans made their objections to the scheme known.

This is a developing story and will be updated when additional information comes in.