People in the local media allege that ad revenue is used as a way to control journalists and stop them from publishing critical articles. Amidst the opposition’s allegations of an undeclared emergency being imposed on Bihar’s media, the Nitish Kumar government has spent Rs 498 crore on advertisements during the last five years, reveals information obtained in response to a Right to Information application.

Details were sought regarding ads issued by the state government in the media (electronic as well as print) during the last five years. According to the response, the Bihar government spent Rs 83,34,28,851 during the financial year 2014-15. 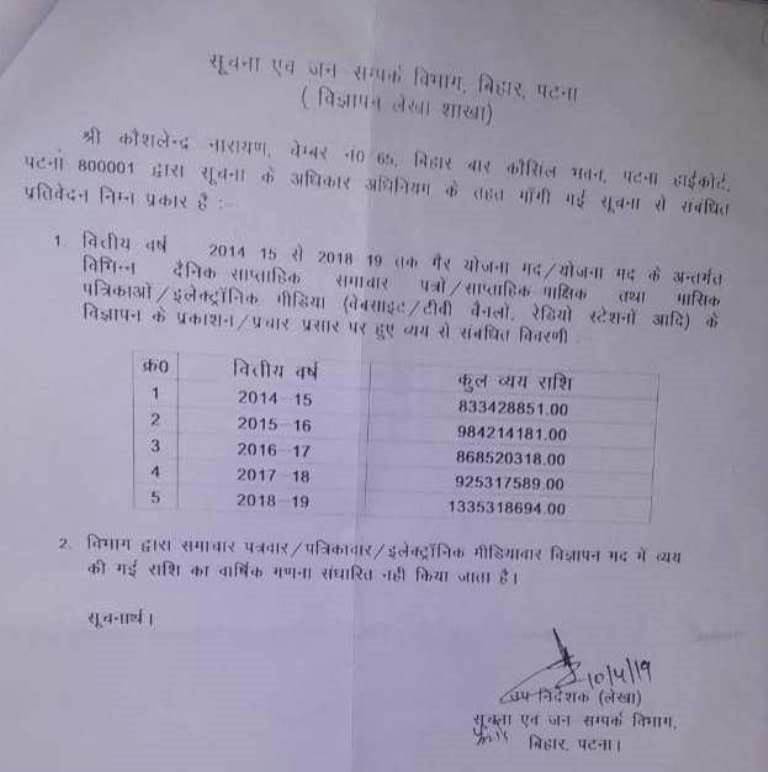 It is noteworthy that Nitish Kumar was elected chief minister after his party, the Janata Dal (United), formed a grand alliance with the Rashtriya Janata Dal and the Congress during the Bihar assembly elections in 2015.

RTI activist Narayan Giri told The Wire that in the RTI query, details were also sought regarding the amount paid to various newspapers and news channels in exchange for the ads, but the department claimed that it does not keep a record of this.

Looking at the annual data on ad expenditure since 2000-2001, it emerges that there has been an exponential rise in spending in the last five years.

In the following years, ads worth less than Rs 5 crore were issued. The state government spent nearly Rs 23.48 crore on ads from 2000-2001 to 2004-2005. During that period, the RJD was the ruling party in Bihar, under then chief minister Rabri Devi.

As per the data, a steep rise was witnessed in spending on advertisements since the formation of the Nitish Kumar government on November 24, 2005. The Bihar government began issuing ads to the electronic media in 2008-09, but that year only Rs 25.3 lakh was paid for such ads. The rest of the ads were issued to Hindi and English newspapers.

For years, the Nitish government has been accused of thrusting its advertisements upon newspapers and news channels, and preventing them from publishing content that criticises the government.

There have been several reports that the government stopped ads to certain newspapers because they had published reports criticising the government.

The increased spending on ads is being viewed as an exercise in mounting pressure on newspapers and news channels.

A senior journalist associated with the print media, Pushpmitra, says, “Nitish Kumar uses advertisements as a weapon against newspapers. If a newspaper publishes even a slightly negative story, ads are immediately cut off.”

He adds that owing to the fear of losing ads, newspapers do not publish stories condemning the government. If at all such stories are published, they are placed furtively on the inside pages – where neither the government nor the readers notice them.

On the condition of anonymity, a journalist who has been associated with a pro-JD(U) newspaper for a long time recounted several such instances, when ads to the newspaper were stopped for publishing anti-government stories.

Another journalist associated with a prominent Hindi daily, on the condition of anonymity, said that once his newspaper published an analytical story on Bihar’s growing crime rate – following which the advertisements to the newspaper were discontinued. In order to procure the ads again, the paper had to publish liquor ban success stories for several days.

Around five or six years ago, a three-member fact-finding team constituted by the Press Council of India conducted a survey on press freedom in Bihar and found that the media is facing tremendous pressure from the state government. The report said, “Free and fair journalism in Bihar is facing a situation of censorship the likes of which was seen during the Emergency in our country.”

“Surprisingly, the list also included newspapers which are published from outside the state, where the desks have a constant demand from its Bihar-based reporters to file state government-friendly reports. This was ostensibly with an eye to curry state government favour in the form of state government ads,” added the report.

The report also claimed that the management of the newspapers being published from the state have allegedly surrendered before the government due to the fear of losing advertisements.

The PCI fact-finding team also went through various editions of newspapers published from the state, and found that the activities of the chief minister were prominently published, including stories which were neither newsworthy nor relevant, if judged by the standards of journalism.

Rajya Sabha deputy chairman Harivansh, then editor-in-chief of Prabhat Khabar, wrote a lengthy article in his newspaper describing the PCI report as false and fabricated. He wrote,

“Apologies: It is the first time that we have used such adjectives for a report of the Press Council of India when we call its Bihar report false, one-sided, fabricated, prejudiced, and written with an underlying objective to defame Bihar and its journalism. We have drawn this conclusion on the basis of facts.”

It is worth mentioning that within three years of the National Democratic Alliance coming to power in Bihar in 2005, Nitish Kumar implemented an advertisement policy in the state. The policy determined the eligibility of newspapers for receiving state government ads based on their circulation.

According to the Bihar Advertisement Policy, only those Hindi dailies are eligible to get government ads which have a minimum circulation of 45,000. The circulation limit for English newspapers was fixed at 25,000, and at 20,000 for Urdu dailies.

Experts claim that owing to these guidelines, newspapers with lower circulation avoided negative stories about the Nitish government and published content to please the state. Colluding with officials, the owners of such newspapers got ads even though they were not eligible. 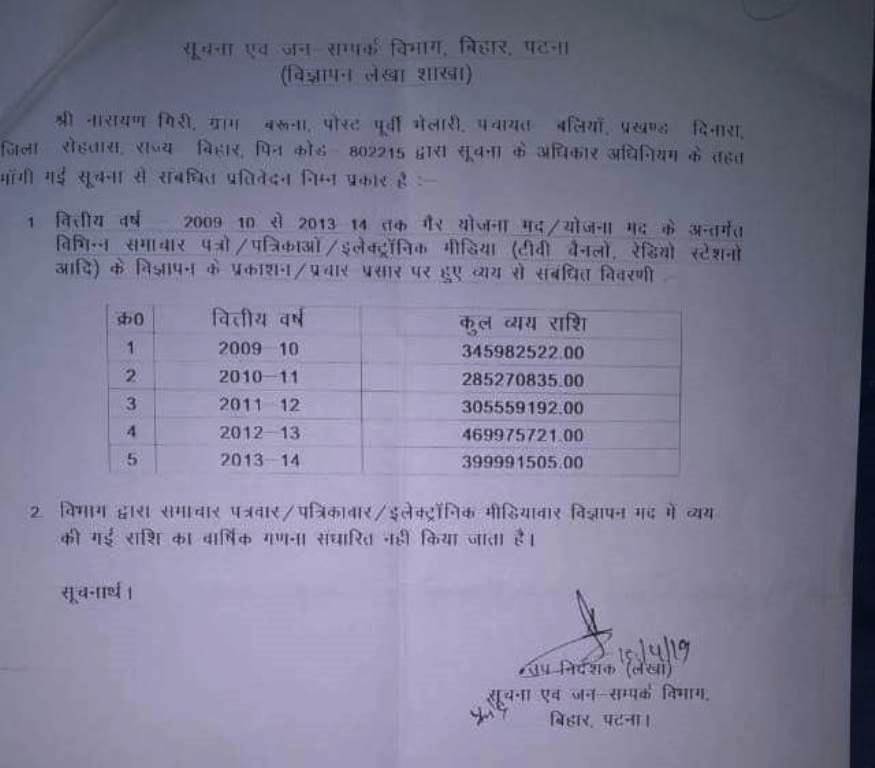 A recent example is Pratah Kamal, a daily published from Bihar’s Muzaffarpur. The newspaper is owned by Brajesh Thakur, key accused in the Muzaffarpur shelter home case, who is currently in jail.

According to Bihar’s Department of Information and Public Relations, Pratah Kamal‘s circulation was recorded at more than 40,000. Pratah Kamal – as well as the Urdu and English dailies under it, Halat-e- Bihar and News Next – received state government ads worth Rs 30 lakh annually. However, an investigation has revealed that their circulation is no more than a few hundred. Surprisingly, Pratah Kamal kept receiving government ads even after Thakur was booked in the shelter home case.

Under the advertisement policy, the Nitish government took another measure – centralising the advertising and payment system. With this system, the government began monitoring newspapers more closely.

Earlier, when the right to issue advertisements was with the respective departments and district offices, ads of the concerned department were stopped in case negative stories were published while other ads continued unaffected. But after the centralised ad policy, the Department of Information and Public Relations now issues ads related to district offices as well.

Sources close to the print media claim that in wake of the latest ad policy, ads of all departments are stopped if a negative story is published regardless of the department involved.

Corporate editor of Prabhat Khabar Rajendra Tiwari admits that the new Bihar government formed in 2005 started using ads to bridle the media, as had happened in Gujarat.

He says, “The government earlier used to pressurise through ads, but never misused them. The government that came to power in 2005 began using ads to rein in the media. This trend is not right at all.”

People associated with the advertising department of Hindi newspapers claim that a major portion of the total revenue of newspapers in Bihar comes from ads. In such a situation, if ads to a newspaper are cut off for a couple of months, its revenue suffers a considerable blow. And then, the management begins pressurising the editor to get more ads.

“Spending Rs 400 crore on advertisements in a poverty-ridden state like Bihar is not a minor issue. He (Nitish Kumar) seeks to pull Bihar out of poverty by demanding special status for the state and asks for a special package. But look at the way he spends the money he has,” he adds.

Economists consider expenditure on ads in a poor state like Bihar as sheer waste.

When asked about the reckless spending on ads, JD(U) leader Neeraj Kumar said that media is the means of informing people about government schemes related to public interest. It’s not like the JD(U) is promoting itself through these advertisements, he said.

Presenting the budget in Bihar last year, state finance minister Sushil Kumar Modi said that the budget increased a little more than 6.5 times in 2018-19 as compared to the financial year 2005-06, when Rabri Devi was chief minister. The NDA government headed by Nitish Kumar assumed power in November 2005.

If the advertising budget is calculated for those two years, it turns out that the expenditure on promotion has increased more than 20 times.

Despite the state government’s claims of increasing the budget to show its commitment towards improving the economic health of Bihar, the rapidly increasing advertising expenditure shows that the government is more concerned about its image than Bihar’s economic health.

After this report was first published on The Wire Hindi, the Bihar government’s Department of Information and Public Relations issued a clarification.

The department claimed that 76%, that is Rs 376 crore, of the total payment of Rs 494.67 crore by the Bihar government was made with regard to classified advertisements. Under classified ads, money is spent on statutory, financial and regulatory requirements for publishing information related to projects of various departments, tenders and information of a compulsory nature.

It is claimed that payment has been processed in a centralised manner by the Department of Information and Public Relations since then. Therefore, it is a binding and compulsory expenditure. It is also claimed that the budget expenditure of Bihar has increased more than 20 times as compared to the amount spent between 2000 and 2005. So, the size of development plans and the number of tenders has considerably increased. As compared to 2000 and 2005, the DAVP rates of newspapers and news channels have also witnessed a sizeable hike.

The entire contents of the clarification issued by the Bihar government can be read below.

Clarification Regarding the… by on Scribd