Can Bihar Govt Handle the Annual AES Outbreak as the COVID-19 Crisis Rages?

Bihar's track record does little to assuage worries. Here are some steps the administration needs to take fast. 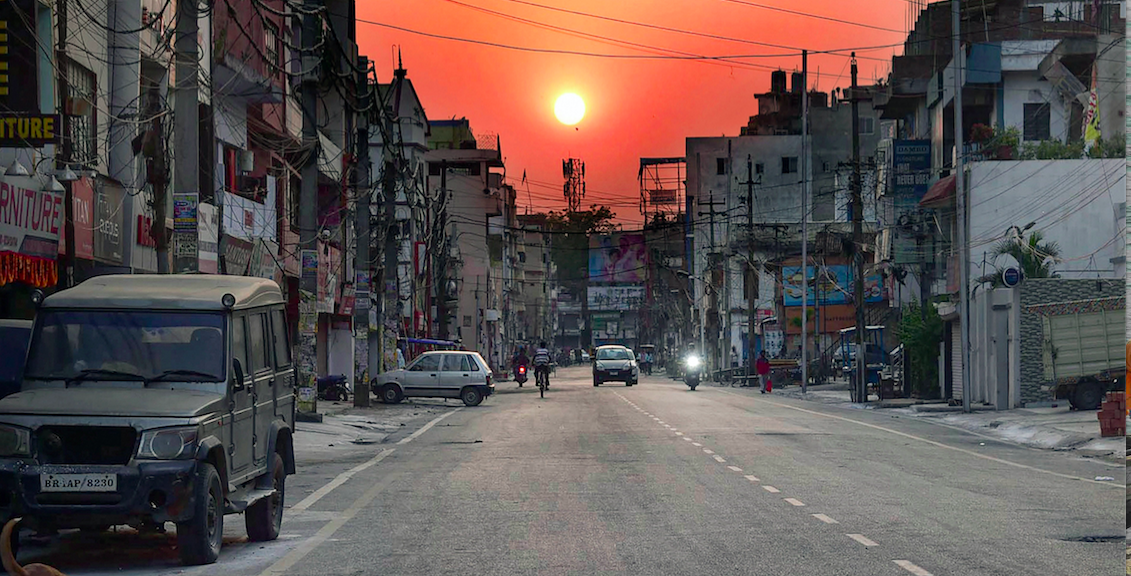 A deserted view of a street in the backdrop of a sunset during a complete lockdown imposed in the wake of coronavirus pandemic, in Patna, Saturday, April 11, 2020. Photo: PTI

While the entire country is reeling under the fear of a COVID-19 epidemic and the unprecedented humanitarian crisis that the control measures have unleashed, the vulnerabilities of one state in particular should be a cause of extreme concern for everyone.

Unlike other states, the spectre of a dual health crisis – that of communicable and vector borne diseases – hangs over Bihar. Is the health system in Bihar prepared to respond to this unprecedented challenge? This is literally a life and death question for two of the most vulnerable demographics – children and the elderly – in the state.

Bihar is the state with the highest population density in India and with the reverse migration that has taken place following the countrywide lockdown, the possibility of a spike in the number of COVID-19 cases has greatly increased. Also the states was very late in setting up its COVID-19 testing capacity, the number of designated diagnostic labs have increased from one to three a few days ago with the inclusion of Darbhanga Medical College Hospital. It is also noteworthy that the lone testing tab was actually reported to be a collection centre that would to send samples to Kolkata and Pune for testing.

Therefore, with increase in the number of tests coupled with the return of migrants from Indian metropolitan cities and other countries, the numbers are going to spike and the trends are already showing. Nurses of PMCH who have deployed at an isolation ward stage a silent protest outside the principal office, demanding the supply of Personal Protection Equipment (PPE) during a nationwide lockdown imposed in the wake of coronavirus pandemic, in Patna, Monday, April 13, 2020. Photo: PTI

Some of the districts in Bihar also face a yearly outbreak of Acute Encephalitis Syndrome (AES). Last year alone, close to 200 children’s deaths were reported from the state and reports of AES-related hospitalisations have already started coming from Muzaffarpur; the worst affected district.

While this is not an unexpected epidemic like the coronavirus and we actually know a tentative time period of the AES outbreak (from May to August/September), the state’s lack of health system preparedness to handle the cyclical crisis is inexplicable. The awareness programs in the endemic regions are palpable by their absence, like every year, and there are no indications that there is any change from the previous year in terms of the system’s preparedness to handle the flood of cases.

There are threatening health system deficiencies in the state that are a result of a chronic social, political and economic neglect.

Unfortunately the impact of such deficiencies heighten in a time of a crisis and the AES outbreak in Muzaffarpur last year exposed them.

Some of the glaring systemic deficiencies are:

Children in Bihar are physiologically the least equipped to fight an infection owing to their worst nutritional status in the country. Every year wild conjectures are made on the possible causes of the outbreak, however, one risk factor that is clinically established and acknowledged by the state government is the lack of nutrition in the children who die.

Although, the state does seem to take this into cognisance and has started to think about improving the nutritional status of its children, which incidentally is the worst (48% and 44% of its under-five children are stunted and underweight) in the country according to the National Family Health Survey (NFHS 4) data; there is a palpable lack of urgency towards it.

Bihar has the ignoble title of being the lowest public spender per capita on health. While the low public expenditure on health can be attributed to the low per capita income of the state, what is unexplainable is why the state chose not to spend the annual funds allocated to it under the National Health Mission programme in its entirety.

The State Health Society website has not published its annual FMR (Financial Management Report) so it’s difficult to know exactly how much of the NHM funds Bihar has utilised. However secondary sources report that it used only half of the allocated funds in the year 2017-18.

This delinquent lack of financial investment in the state’s public health forces its people to rely on private health facilities leading to extremely high Out of Pocket Expenditure (the ratio total health expenditure that is borne by people).

The national government’s announcement to cap the price of COVID-19 testing from private diagnostic labs to Rs 4,500 would mean that just the diagnostic expenditure could prove to be catastrophic for a number of households in the state.

In the NITI Aayog’s state index, Bihar is the second worst performing state in 2017-18 and has seen a decline in its score from 2015-16. Recording an incremental change of -6.35%, it was the worst state in India.

A dilapidated primary healthcare system is a big contributor. Considering the nationally recommended ratio of one Primary Health Center (PHC) per 30,000 people, the state should have more than 4000 PHCs, whereas it has a meagre 533 according to the Bihar Economic Survey 2017-18.

Even after including the APHC (additional PHCs), it still barely crosses 2,000.

Bihar’s tertiary care is not in a praise-worthy shape either. Take Muzaffarpur for an example; the worst affected district from the AES outbreaks. Chief minister Nitish Kumar announced last year that the number of in-patient beds in SKMCH in Muzaffarpur would be upgraded from 610 to 1,500 in a year and to 2,500 in two years and to upgrade the paediatric ICU from 50 to 100 beds.

The district which has the highest bed occupancy ratio in the state, higher than 100%, would be scrambling for resources if AES and COVID-19 cases along with other patients requiring hospitalisation happen to converge on it in the next few months.

Bihar also has the worst doctor-patient ratio in India. There were 3,679 government doctors (including contractual) in the state in 2017-18, which means that one government allopathic doctor serves 33,161 people in the state.

Compare it against the World Health Organization (WHO) recommended ratio of at least one doctor for 1,000 and you can imagine how frightening the situation is. Even after including all the private practitioners in the state, the ratio still remains close to 3,000. The picture for other health personnel as also one of gloom. For one lakh people, there are only two Grade A nurses available in the state, even if a small fraction of them require intensive care, lack of well-trained trained nurses could lead to a catastrophe.

What can the state do now?

Although with the flurry of notifications uploaded on the department on health website in Bihar in the last ten days, it seems that the health department has finally gathered itself to fight the impending COVID-19 crisis, there is no mention of the possible AES outbreak; the cases of which are already being reported from Muzaffarpur.

The government has set up a task force to fight the COVID-19 pandemic and in a letter dated March 30, has notified that isolation wards be set up in all district hospitals of the state. But does it have the health personnel to attend to the newly designated 2358 isolation beds?

Locals commute in a crowded boat, violating curfew norms, during the nationwide lockdown to curb the spread of coronavirus, in Patna, Monday, April 13, 2020. Photo: PTI

To strengthen the health system in Bihar systemic improvements across components are needed, but systemic efforts need a lot of time, energy and socio-political will. However, to protect its people from the impending health crisis as efficiently as it can, the state can look at these options:

Often in health systems where a mix of public and private players exist, the private providers are seen to withdraw in providing emergency care and in fighting epidemics. However, in the present crisis, countries like Spain and Germany have ensured that the private sector doesn’t shirk this responsibility. There is no way that in a state like Bihar, where more than 70% of the healthcare is provided by the private sector, government health facilities alone can handle a state wide health crisis.

The need to identify, train if needed, and include private players in the fight against COVID-19 and AES is imminent. More diagnostic centres would be desperately needed given the large number of migrant workers returning to the state.

Affordability of care will also have to be addressed as the average private hospitalisation in Bihar costs Rs 17, 518 and the per capita income of the state is only Rs 28,485. Although the ICMR has capped the private diagnostic cost at Rs 4,500, it would still remain unaffordable for a large number of households in India.

It should be kept in mind that there are existing health care services that the state is already struggling to provide and the influx of COVID-19 and AES patients shouldn’t render them without care. Bihar has the highest total fertility rate, which means obstetric post-natal care would continue to demand a lot of attention.

Acute Respiratory Infection (ARI) is the biggest cause of illness in and COVID-19 patients would require similar clinical care. It would be wise for the state to convert large spaces like stadiums into makeshift Corona care facilities.

Ensure that the children are not hungry and undernourished

Nearly 40% of the primary school children don’t have access to mid-day meals (MDM) and districts like Vaishali report a coverage of only 56.5%. With the closure of schools following the COVID-19 lockdown, the nutritional status of these undernourished children is going to further deteriorate and many might already be living with hunger.

The state government through its anganwadis and panchayati institutions should immediately distribute MDM rations in the community.

A state wide IEC program specially focused on the rural areas needs to be launched immediately. In the last one month of my stay in a village I have not seen a health worker engaging with the community on either COVID-19 or the usually impending AES outbreak. No awareness programs, no IEC material, posters or leaflets to inform the people about how they can protect and prepare themselves against the crisis.

There is a pervasive misinformation in the community both about AES and the COVID-19 epidemic that needs to be actively dispelled.