Sources in the government say a concrete announcement is likely to be made on December 6 in favour of the Dalit community. Mumbai: Nearly 18 months after rights activists and lawyers were sent to jail on bizarre charges of being “urban Naxals”, the newly formed Maha Vikas Aghadi government in Maharashtra is showing signs of taking another look into the allegations.

NCP MLA Dhananjay Munde has written to the state’s chief minister Uddhav Thackeray, requesting him to look into the “false allegations” made against activists and lawyers who have been languishing in jail. Munde, in his letter, has demanded that the cases be withdrawn and the activists be released soon. NCP, along with Sena and Congress has recently formed a government in the state.

Last year, the Pune police, in two rounds, had arrested nine activists. These activists, according to the police, have been involved in “urban Naxalism” and had allegedly plotted to assassinate Prime Minister Narendra Modi in a “Rajiv Gandhi style assassination plot”. Those arrested are also accused of triggering violence on thousands of Dalit-Bahujans who were visiting Bhima Koregaon in the outskirts of Pune on January 1, 2018. The gathering was organised to celebrate the 200th anniversary of a historic battle won by the British army – largely comprised of soldiers from the Dalit community – against the Peshwa regime ruled by the Brahmin king Baji Rao II in 1818.

In a letter, written in Marathi, to the CM, Munde said, “The BJP government has falsely implicated several activists. While some of them are already behind bars, others have been forced to visit the courts on a daily basis. BJP government has always been against an individual’s freedom of speech.” Munde further says, “People raising their voice against the government are intentionally attacked. At such times, it is important that those who have been victimised by the BJP government are given justice.” 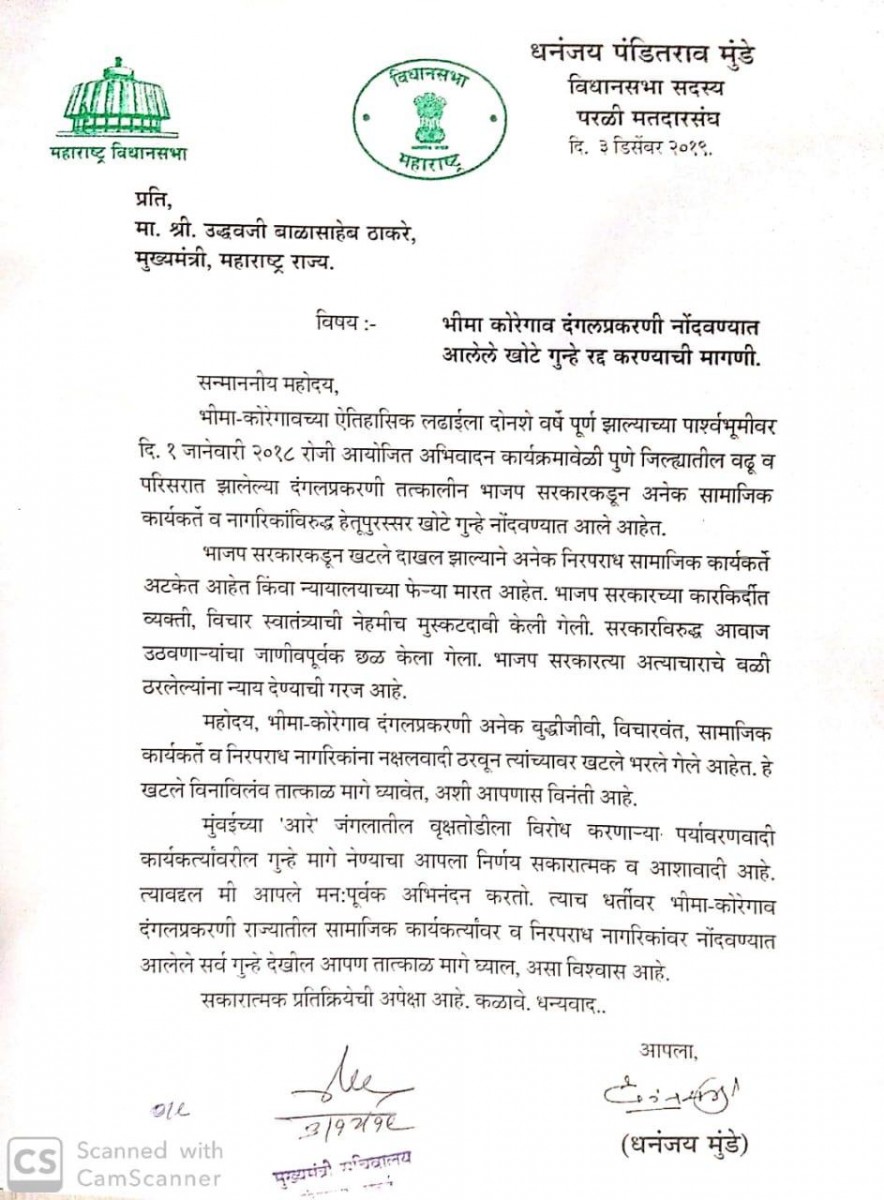 Sena, which was in alliance with the BJP until early this year, had been critical of the way Fadnavis government had handled the investigation. Sena, in its mouthpiece Saamana had ridiculed the Pune police’s grounds for arrest. While the practice of “using the police” for different aims is not new for the politicians and government, in the present instance, “the faster the truth emerges, the better,” (remove the ‘mukhota‘) for the police, the paper’s editorial in September 2018 read.

Soon after the violence in Bhima Koregaon, two senior Brahmin Hindutva leaders – Manohar Bhide and Minind Ekbote – were thought to be the masterminds behind the attack. Several victims had named them as the prime accused and said they had plotted and unleashed their men on the Bahujans visiting Bhima Koregaon. But the police overlooked those complaints and instead named several rights activists as the accused.

The police had solely based this case on electronic evidence and alleged letters that were exchanged between the arrested accused and some persons shown to be “absconding” in the case.  The veracity of the electronic evidence has been challenged by the defence lawyers and also former judges.

Advocate Nihalsing Rathod, who has been appearing for some of the arrested persons in the case, welcomed the sitting government’s interest to relook into the allegation. He says, “The entire case is mythical and evidence has been planted since Day 1. The police have till date not given the accused hash copy of the seizures made from their homes. We have made several applications demanding mirror image of the electronic evidence the police claim to have recovered from their computers. But that too hasn’t been handed over to the accused.”

While a bunch of activists were named as the main perpetrators of the violence at Bhima Koregaon, the state police had also launched a combing operation against Dalit rights activists, especially those politically assertive, and charged them for vandalism and attack. Several hundred were arrested in the aftermath of the attack and eventually released. The Devendra Fadnavis-led government had promised to take these cases back. However, the promise wasn’t honoured. Several activists have been slapped with legal notices, summons and externment notices on a regular basis and the Dalit community in the state has lived under the constant fear of being arrested.

Prakash Gajbiye, an NCP leader and member of the legislative council, has written a letter to Thackeray asking to look into these cases and stop the harassment of Dalit youth in the state. “The Fadnavis government made use of the local police and had implicated several Dalit rights activists, including women and young children,” Gajbiye has pointed out.

Several other leaders, including NCP’s Jitendra Awhad, have sought the government’s attention into the matter. On December 6, on Dr B.R. Ambedkar’s death anniversary, a large number of Bahujans will be gathering in Mumbai’s Shivaji Park. Sources in the government have indicated that some concrete announcement is likely to be made on December 6 in favour of the Dalit community. “The government is serious about reviewing these cases. Several activists have suffered under the Fadnavis government and we want to ensure that doesn’t repeat in our government. We are trying to take every measure to avoid that situation,” a senior leader told The Wire.

Along with the criminal cases registered across the state, Fadnavis had also set up a judicial commission to look into the reasons behind the violence. More than a year-and-half later, the commission has not even completed recording the statements. Elected members of the recently appointed Maha Vikas Aghadi government have also sought a review of the commission’s work.