Punitive population control measures will likely have an adverse impact on the state’s vulnerable groups – migrants, religious minorities and a blend of the two, migrants who are Bengali Muslims. 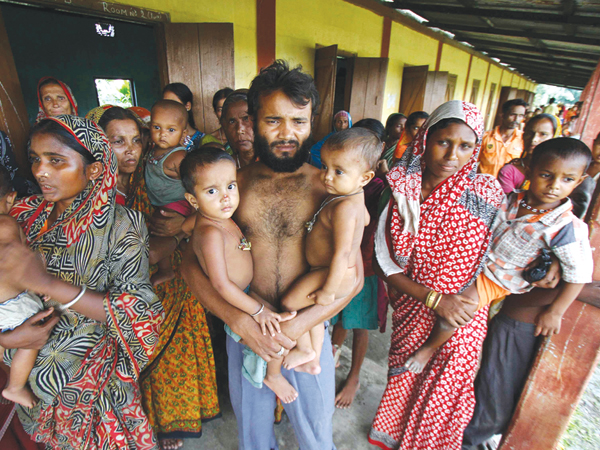 Disincentives and incentives like those in the proposed two-child norm could potentially be counter productive. Credit: Reuters

If it comes into effect later this year, the proposed legislation on population control will disqualify Assamese with more than two children from applying for government jobs, standing for elected government service, including panchayats and civic bodies, and from select housing, employment and other schemes.

“Assam is facing a dangerous population explosion,” the state’s health minister Himanta Biswa Sarma said last month, and this, if his claim is be believed, has necessitated the new population policy.

Except, there is no such ‘dangerous population explosion’.

In Assam, as in India, demographic transition – the sustained fall in fertility rates following development – is underway.

At 2.2, Assam’s, as India’s, current fertility rate is just a notch above the 2.1 replacement fertility rate – the rate at which a population sustains itself, an important target for being a sign of development. Being so close to that goal, “Focusing on development makes better sense than introducing punitive means,” Alaka Basu, a demography expert and professor at Cornell University’s Department of Development Sociology told The Wire.

The Western world’s experience exemplifies that demographic transition is an inescapable truism.

Closer to home, in China, sociologists Martin King Whyte, Wang Feng and Wong Cai go so far as to suggest that the population would have been contained even without the one-child policy. “China’s dramatic post-1978 economic boom and the profound social changes unleashed by rising incomes and levels of education and rapid urbanisation would have driven down birth rates even in the absence of state birth planning campaigns,” they wrote in ‘Challenging Myths About China’s One-Child Policy‘.

In India, Kerala saw a drop in fertility rate from three in 1979 to 1.8 in 1991, as a result of improvement in education, women and child welfare and development, said Poonam Muttreja, the executive director of the Population Foundation of India.

Basu thus proposes intensifying the wheel of development to lower Assam’s – any Indian state’s for that matter – fertility rate. In particular, the focus should be on improving the delivery of health and reproductive services and access to education, a stepping stone to employment and a brighter future.

A person’s sense of security about the future has a deep psychological association with childbearing decisions. In vulnerable populations, it dilutes the perception of children as a primary insurance against adversities that regularly strike their lives, said Basu.

In neighbouring Bangladesh, research has shown that high child mortality rates accentuate the sense of insecurity about the future, provoking a higher fertility rate. In families where no child had died, the total fertility rate was 2.6 and in those where one child had died, the rate was 4.7 children. Death of two children meant 6.2 children and more than three child deaths boosted the rate to 8.3 children.

Contrary to the development-led slow-and-steady path to family planning, disincentives and incentives like those in the proposed two-child norm could potentially be counter productive.

Andhra Pradesh, Odisha, Maharashtra, Rajasthan, Bihar and a few other states that have made the two-child norm a precondition for elected representatives are expecting to see a deterring effect on the community, observed Leela Visaria, a professor at the Gujarat Institute of Development Research. “But evidence suggests that even at the village level, caste, class and gender politics dominate, and those who belong to the backward communities offer no role model to members of higher castes or their own kith and kin,” she (and others) concluded in a 2006 Economic and Political Weekly report titled ‘Two-Child Norm Victimising the Vulnerable?’

In fact, as a result of disincentivising couples with more than two children, Madhya Pradesh, Rajasthan and Uttar Pradesh have seen a rise in abortions, women being deserted and women giving their children up for adoption, said Muttreja.

Punitive measures to control population could have an even worse fallout on vulnerable groups, Basu reckoned, an observation of great relevance to Assam for being home to several marginalised categories – migrants, religious minorities and a blend of the two, migrants who are Bengali Muslims, a religious minority in the state.

Basu opined that migrants would probably not be affected directly by the two-child norm because they are already living at the margins of society, from where they are hardly able to seek panchayat positions or government jobs or housing or other such benefits, regardless of their number of children. In such circumstances, the new policy would fail to deliver the intended population control aim.

“Additionally, what could happen is that their higher fertility could become an excuse to impose further restrictions in their lives, including subjecting them to coercive birth control, or to legitimately infringe on their human rights in general because they are not being patriotic enough to help bring down population growth in the country,” she said. “We live in times when there is no greater crime than not being patriotic and we don’t need to add any more criteria to define patriotic behaviour.”

Assam per se is not facing a dangerous population explosion, contrary to what the state’s health minister said. But the state’s Muslim population grew at 29.59%, close to three times the 10.9% growth rate of the Hindu population. This significant differential increased the share of Assam’s Muslims in the state’s overall population by 3.3% in the last decade – from 30.9% in 2001 to 34.2% in 2011 – over four times the 0.8% average accretion of Muslims across India.

Should this be a matter of concern?

In the months prior to announcing the new policy, Sarma had observed that the Muslim population has outnumbered local Assamese in 11 districts of the state and this changing demography of Assam poses a threat to the extinction of local people. He had spoken in favour of granting citizenship to Bengali Hindu migrants from Bangladesh, conspicuously passing over a similar assimilation of Muslim Bengalis.

Policymakers in Assam, please take note: a high population growth rate is not exclusive to Muslims in Assam. Muslims are the fastest-growing religious group globally, according to a 2015 report by the American think tank Pew Research Centre, growing faster than the world’s population because they have the youngest median age (24 in 2015 as against 32 for non Muslims) of all religious groups and a higher fertility than the global mean. Muslim women have an average of 2.9 children while non-Muslims have an average of 2.2 children.

All religious groups in India have seen a decline in birth rates since independence, said Basu, as an outcome of demographic transition, and clearly, the Muslim population responds favourably to economic progress as well.

Why resort to alarmist speeches asking Hindus to have more children – as a Rashtriya Swayamsevak Sangh member reportedly did last year – or favour Hindu migrants over Muslim migrants, when inclusive economic progress and the proposed non-coercive measures like increasing the age of marriage and making education free till the university level would yield better outcomes?

Why root a population policy in questionable strategies when a proven path to success exists?

Charu Bahri is a freelance writer based in Rajasthan.