Himanta Biswa Sarma Bragged About Buying PPE Kits From China. But an RTI Reply Says His Govt Never Did.

The media blitzkrieg around this claimed purchase during the COVID-19 pandemic helped catapult Sarma to the top of the Assam BJP. 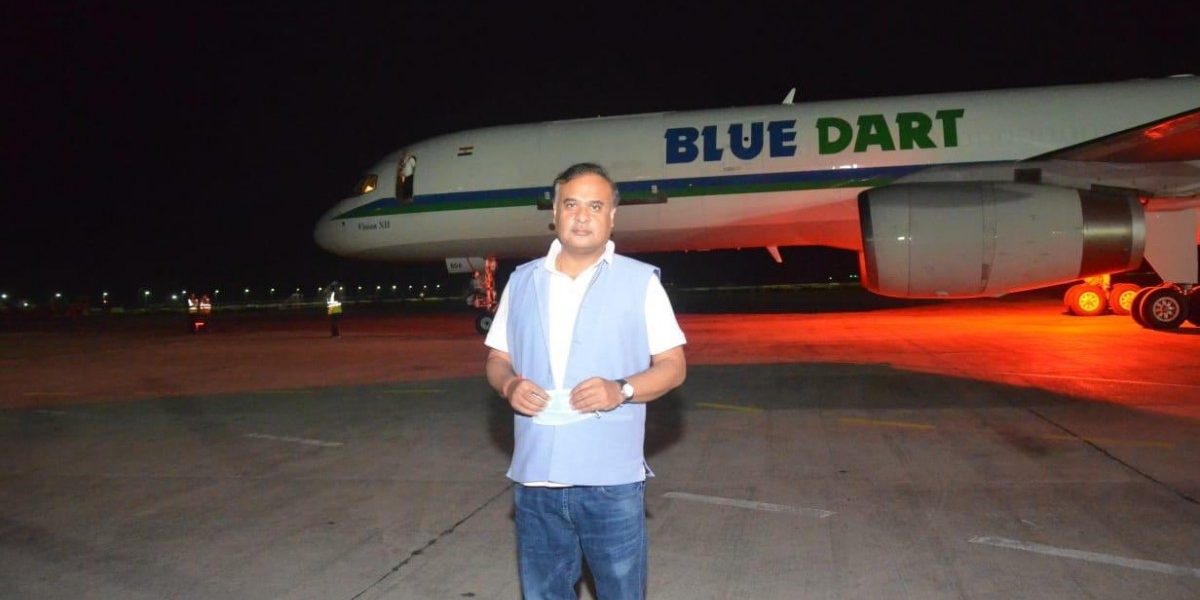 Himanta Biswa Sarma posing in front of the cargo plane that he claimed brought the PPE kits. Photo: Twitter/@himantabiswa

This report is a collaboration between The Wire and Guwahati-based news portal The Cross Current.

Guwahati: Assam chief minister Himanta Biswa Sarma had famously stated in April 2020 that the state health ministry, which he had headed then, was the first in the country to individually procure 50,000 PPE kits from China to meet the COVID-19 crisis in the northeastern state. However, in a shocking revelation, an RTI reply from the state chapter of the National Health Mission (NHM) which had carried out all pandemic-related emergency purchases has categorically stated that no such procurement was done.

On May 10, Union home minister Amit Shah addressed a massive rally at Guwahati’s Khanapara area to celebrate the completion of the first year of Sarma as the state chief minister. Around this time last year, Sarma’s strongest claim to the Bharatiya Janata Party (BJP) top leadership in New Delhi for the chief minister’s chair – instead of the then incumbent Sarbananda Sonowal – was perhaps the public perception built around him in a section of media as the man in the Assam government who solely led from the front and successfully tamed the COVID-19-induced public health crisis. Several television, online and social media platforms, both within and outside the state, had constantly and widely amplified that perception by featuring Sarma, then the health minister, at the core of it. The media particularly lauded Sarma after he announced on April 15, 2020 on Twitter the specific purchase of PPE kits from China as “a big reason to cheer” while posing for two photographs against a cargo plane from China at the Guwahati airport.

Another BIG reason to cheer!

Keeping life first as the motive, we’re glad to have imported 50,000 PPE kits from Guangzhou,China. I am happy to receive this special flight along with @Pijush_hazarika at #Guwahati airport just now. A big reassurance for our doctors & nurses. pic.twitter.com/nFkFkwfPQZ

The high point of that media blitzkrieg around Sarma as the leader (and not Sonowal) was the video clip of Sarma visiting the Guwahati airport on the night of April 15, 2020, to personally receive those Chinese PPE kits. Speaking to reporters then, Sarma had said, “While government of India has procured over 1.70 lakh PPE kit from China, we have procured 50,000 PPE kit from the Guangzhou in China. This is probably the first time that a state in the country has procured on its own.”

In a report lauding this feat, India Today had said, “At a time, when global cargo movements are limited and demands for PPE have grown manifold in the world’s top countries, this direct procurement by a state needed out-of-box thinking and bending of government rules.”

Curiously though, on March 10 this year, in an RTI reply to The Cross Current, seen by The Wire, the state NHM which had carried out all the procurements of essentials including PPE kits to meet the COVID-19 crisis categorically distanced itself from Sarma’s claim, stating, “NHM, Assam, didn’t procure any PPE kits from China at any time.”

The state NHM said it “had placed orders for PPE kits to various business entities, within the country only, and, therefore, have no information on individuals who might have transferred money to any other country for procuring PPE kits”.

The April 17, 2020 India Today report, headlined ‘How Himanta Biswa Sarma Broke Rules To Buy PPE Kits From China’, had stated: “Assam government had placed an order for 50,000 PPE kit on March 29 to a Delhi-based supplier.” However, the list provided by NHM through the RTI to us, which included the quantity of PPE kits bought by the state health department between March 18, 2020 and January 4, 2022, didn’t display that order.

Also read: Why Did the Assam CM Appoint an Enquiry Officer to Look Into a Bribery Case Already Under CBI?

On specifically seeking a copy of the order issued in the name of that ‘Delhi supplier’ as mentioned in the India Today report, NHM drew a blank and instead asked The Cross Current, the applicant of the RTI, to name that company first in order to get more information on the matter.

The India Today news report – the only blow-by-blow account of that particular purchase, which is why it is being extensively quoted here – had also said, “The supplier took the order, worth nearly Rs 15 crore, only on one condition — the payment has to be made in advance. According to the norms, the government doesn’t make an advance payment.” Therefore, minister Sarma reached out to a number of contractors to pay Rs 15 crore to that Delhi-based supplier and take back the money from it once the Assam government cleared its bill on delivery of those 50,000 PPE kits.

In mid 2020, just days after Sarma was praised in the media for being the only health minister of a state to procure PPE kits from outside the country, reports also surfaced that they were of a sub-standard variety and, therefore, could be of no use to the medical fraternity. That contention was based on rumours in the media that 50,000 of the 1.70 lakh Chinese PPE kits that the Indian government had procured failing the safety checks at the DRDO’s (Defence Research and Development Organisation’s) Gwalior laboratory. Since the Indian government consignment from China was not CE/FDA certified, they had to undergo the check. DRDO later claimed that it does not “pass or fail kits provided to it for testing”, but merely carries out “tests as per set standards and provide that to the agencies concerned”.

On April 18, 2020, Sarma said that since there were apprehensions expressed by medical doctors in the state about using those Chinese PPE kits following the DRDO checks on another set of Chinese PPE kits, he had “requested the person who brought the 50,000 kits from China to keep them at his store in Guwahati”.

“We said we will take those only when we need them. We don’t want our doctors and nurses to go through any anxiety at this time. So, somebody will be losing money,” he told reporters.

In a complete U-turn, the minister then distanced himself from that purchase and also denied that the state government cleared any payment for it.

On March 3 through the RTI application, NHM on being asked whether it had taken delivery of those kits categorically denied it, while also stating that “there is no information” regarding the present physical status of those kits.

The Wire and The Cross Current have jointly sent a mail to the state health department and the finance ministry – both ministries then headed by Sarma – asking to confirm if either of the departments had placed an order for 50,000 PPE kits with ‘a Delhi supplier’ on March 29, 2020 as reported in media. A mail has also been sent to NHM director’s office asking why it had not carried out that particular emergency purchase hugely amplified by the minister while the department had done the rest of the procurement.

The story will be updated if and when replies are received.