The Praful Patel administration’s decision to hike the fare for public transport and essential services, including passenger ships and air ambulances, has attracted widespread criticism. Kozhikode: As the union territory of Lakshadweep started to witness fresh protests against “unpopular” decisions of its administration, the authorities appear to be using intimidation tactics to silence the critics.

The Lakshadweep police have booked its Lok Sabha member, Mohammed Faizal, for “public nuisance”, after the MP protested an unpopular transport fare hike announced by the UT administration.

In a separate incident, the director of the education department issued a notice to school principals seeking details for student protestors, for apparently taking disciplinary action against those who held a strike demanding restoration of scholarships.

Faizal, the only MP from the islands and a leader of the Nationalist Congress Party (NCP), has been booked under Sections 188, 268, 269 and 270 of Indian Penal Code and Section 51(a) of the Disaster Management Act, 2005.

These provisions deal with “public nuisance”, “disobedience to order duly promulgated by public servant” and “negligent act likely to spread infection of disease dangerous to life”, among others.

On November 10, the MP and a group of around 20 NCP activists in Lakshadweep held a protest event at Kavaratti island, the UT’s capital, to protest the fare hike recently announced by the administration in public transport and essential services, including passenger ships and air ambulances.

Lakshadweep leaders and other civilians say the fare hike would further deteriorate the living conditions of the islanders. The economy of this archipelago has been affected due to the COVID-19 crisis, a resident told The Wire. He also said the administration’s recent decisions to terminate hundreds of employees made the situation worse.

In Lakshadweep, where the inhabited islands are scattered in the Arabian Sea and which has very limited health infrastructure, air ambulances are an essential service.

According to the increased fares, a Lakshadweep family will now have to pay Rs 30,000-50,000 to move a patient who requires emergency medical treatment to Kerala, the nearest destination, through air travel. This includes tickets for the patient and two helpers. There are slight differences among the fares from different islands.

The first and second class tickets in passenger ships also saw a significant fare increase, according to a native of the islands. “This will severely affect ordinary people because they are already struggling financially,” he added.

Lakshadweep natives regularly travel to Kochi and other sea ports in south India, like Beypore and Mangalore, as they rely heavily on the mainland for education, trade, health care and job.

The fares for non-local travellers are even higher. Lok Sabha member Faizal told The Wire that the increase in the ticket fares vary from 10% to more than 100%.

According to different sources in Lakshadweep, the current fare hike is nightmarish for the common people because of a number of reasons. They pointed towards a “widespread economic crisis” in the islands, caused by both the pandemic and unpopular “administrative reforms” by the Praful Patel administration, including dismissal of hundreds of contractual employees in various government departments.

According to Faizal, “nearly 2,000 contract employees have been laid off by this administration”. He also said the terminations took place in the midst of the pandemic, “when everyone was struggling financially”. “This is something that only a hard-hearted person can do,” he added.

The FIR against the Lok Sabha member, for a peaceful protest event, is apparently only the latest in a series of intimidation tactics used by the UT administration.

On November 17, the director of the education department issued a bizarre notice to the school principals in Lakshadweep. The notice, issued by Vishal Sah IAS, sought details of the students who attended a recent protest demanding reinstatement of educational scholarships, restoration of study tours, and appointment in vacant teaching posts.

The protest and boycott of classes were held in all the 10 islands under the banner of Lakshadweep Students Association (LSA), on November 15. 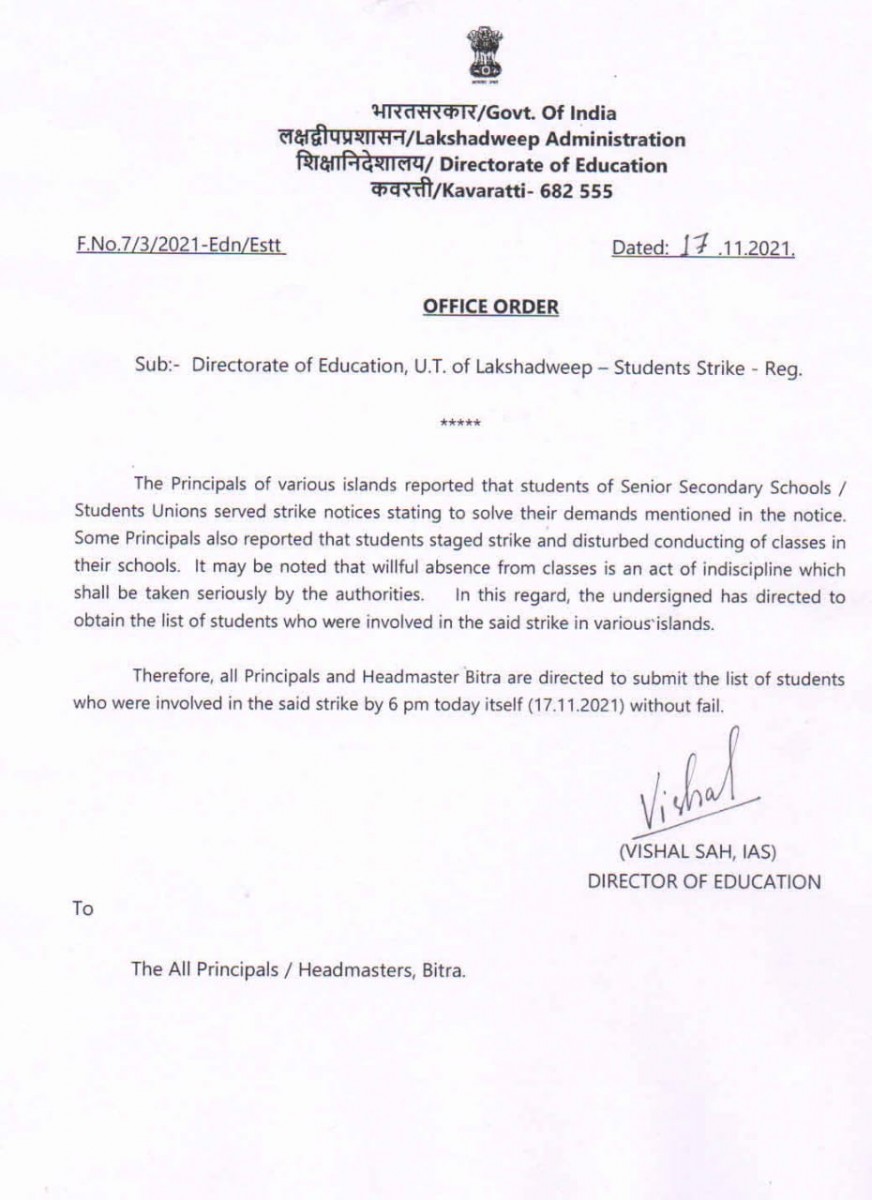 The notice from the director of the education department.

Faizal said the administration has now “started to target students who raise voice for their rights”. “Peaceful protest is a constitutional right. But this too is being threatened here. This is what is happening in Lakshadweep today.”

The fare hike – another contentious move by Patel administration

The NCP’s protest event was held in Lakshadweep to protest the fare hike, which is the latest among a series of unpopular, unilateral decisions taken by the Lakshadweep administration, which is now controlled by its unelected head Praful Khoda Patel, a Bharatiya Janata Party leader from Gujarat.

The latest fare hike has been ordered by the department of port shipping and aviation of the Lakshadweep administration.

Faizal told The Wire that “there was no change in the fare for air ambulance, whenever the sea and air fares were enhanced in the past”.

Unlike how the fares were increased in the past, the current hike was not discussed with the elected representatives of the islands, like the Lok Sabha member and head of the district panchayat.

Faizal said the islanders are “compelled to evacuate some patients to mainland because there’s no adequate health facility in Lakshadweep”. “So, ideally, the government should not have charged anything from the patients for this,” he added.

“Evacuation of a patient requiring immediate medical treatment is government’s responsibility. It’s a right of the citizen to get adequate treatment,” he said.

In a recent letter sent to Narendra Modi, Faizal urged the prime minister “to issue strict directives” to the administrator, Patel, to withdraw this “inhumane decision taken at the cost of the lives of the islanders”.

“Entire health sector is in crisis”

Both Faizal and a government employee, whom The Wire spoke with, said the entire health sector in the islands is in a mess, thanks to a number of decisions taken by the current administration.

“The health sector has been in crisis,” said Faizal. “This administration has ended a comprehensive health insurance cover that the islanders used to enjoy before.”

A government employee in Lakshadweep, who did not want to be named, told The Wire that the fare hike for air ambulances is “significant” and should be read with “some other negative developments” in the health sector in recent past.

“The administration recently decided to transfer several contractual paramedical staffs from medical centres in different islands to one hospital in Agatti island. But, because of low payment and other logistical reasons, many staff did not accept the decision, and resigned from the service. This led to the weakening of both the medical centres they used to work at and the hospital they were transferred to,” he said.

He also said the dental medicine in the islands also face crisis due to some decisions of the administration, including the salary cut.

Faizal said the administration, by filing FIR against him and others, was targeting his party’s protest under the pretext of controlling the pandemic.

He alleged the police did not act when “2,000-3,000 people were attending the Gandhi Jayanti celebration” in October. He also said even the protests by political parties were also held in the recent past and the police took no action against the protestors. “But they invoked charges under the Disaster Management Act against us. The police invoke those charges only when somebody protest against the wrong policies of the administration.”

The charges against Faizal include Section 269 of the IPC, which deals with “negligent act likely to spread infection of disease dangerous to life”. However, Lakshadweep had witnessed no COVID-19 patients for many days until November 17, when Minicoy, one of distant islands, reported one infection. The UT’s vaccination rate is also very high.

Faizal said he will not be silenced by the police case. “I will continue to fight along with the people.”

He said his party, the NCP, announced protest events across the 10 islands, but the police were visiting houses and asking the residents not to attend the protests. “The police were threatening people with registering cases against them,” he said.  “I wonder if we are living in the [colonial] British period.”

A Lakshadweep resident told The Wire that the NCP protest was a small event, and that both the government and political parties held public events earlier, without attracting police action.

Lakshadweep, a place known for its peaceful living, has witnessed a number of protests (here and here) ever since Patel was appointed as the UT’s administrator nearly a year ago.

A number of draft regulations and executive orders introduced by Patel have been termed by the local leaders as “unprecedented”, “shocking” and “mysterious”. The draft laws, which are still awaiting approval from the home ministry, proposed prolonged preventive detention, forced land acquisition, ban on those having more than two children from contesting elections, and prohibition of cattle slaughter, among other unpopular provisions.