As 'Agnipath' Protests Spread, Govt Raises Age Limit to 23 for Recruits Inducted in 2022

The government claims the new model will help young recruits become entrepreneurs with the aid of a financial package received at the end of their four-year term. 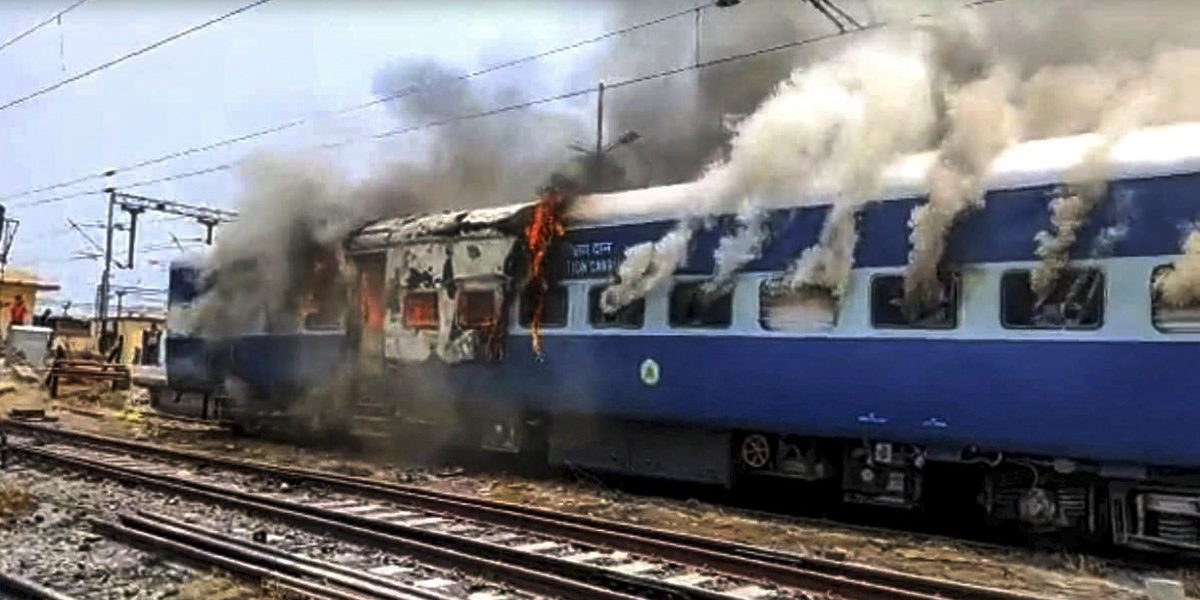 Smoke billows out after youngsters set on fire a train in protest against the Agnipath scheme at Chapra railway station, in Saran district, Thursday, June 16, 2022. Photo: PTI.

New Delhi: With violent protests against the new ‘Agnipath’ Army recruitment scheme raging across several states, a jittery Union government on Thursday night announced a ‘one-time’ relaxation to the upper limit for recruits from 21 to 23.

Though the stated rationale for the change is that it had “not been possible to undertake recruitment” into the Army over the past two years, the fact that a cohort of young men who had hoped to join the Army would now be excluded was known to the defence ministry before the scheme was announced. But the angry reaction it triggered was clearly not anticipated, forcing the Modi government into damage control mode.

Earlier in the day, as reports came in of protests, the government issued a ‘clarification’ claiming that not the new model would not only bring in new capabilities to the armed forces but also open up avenues for youth in the private sector as well as help them in becoming entrepreneurs with the aid of a financial package.

Apart from issuing a ‘Myth versus Facts’ document to address the concerns raised on the scheme, the government’s information dissemination arm issued a series of social media posts, saying that in the coming years, recruitment of Agniveers will be around triple the current recruitment in armed forces and ruled out any change to the regimental system.

“The scheme will bring in new dynamism to the armed forces. It will help the forces bring in new capabilities and take advantage of the technical skills and fresh thinking of the youths… It will allow the youths to serve the nation,” the Press Information Bureau said in a Facebook post.

Referring to the financial package of around Rs 11.71 lakh to be given to each of the recruits at the end of the four-year tenure from the ‘Seva Nidhi Package’, it said it will provide financial independence to the youths and even help them to venture into entrepreneurship.

The clarification came in the wake of protests in several states, including Bihar, Uttar Pradesh and Haryana. Trains were set afire, window panes of buses smashed and passersby, including a ruling Bharatiya Janata Party MLA, pelted with stones in Bihar by Army job aspirants whose protest against the Central scheme continued for the second consecutive day.

#WATCH | Bihar: Youth demonstrate in Chhapra, burn tyres and vandalise a bus in protest against the recently announced #AgnipathRecruitmentScheme pic.twitter.com/Ik0pYK26KY 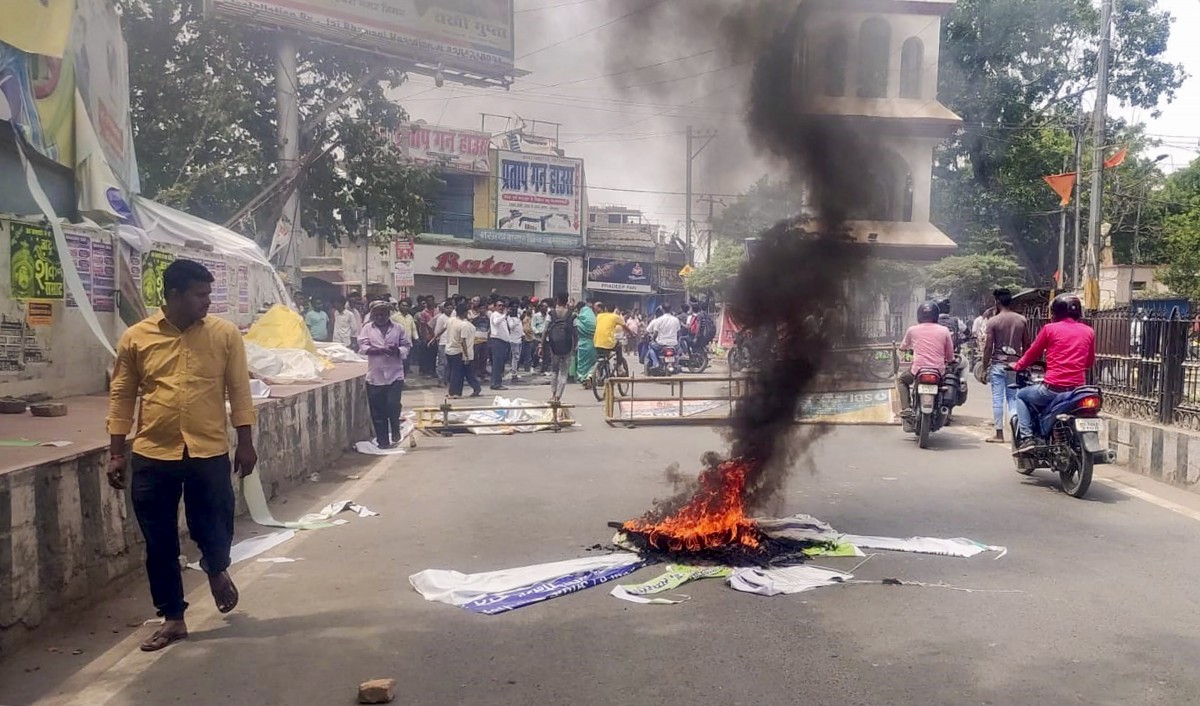 Protestors stage a demonstration against Agnipath scheme, at Chapra in Saran, Thursday, June 16, 2022. The scheme was announced on Tuesday to recruit jawans in the three armed forces for four years followed by compulsory retirement for most without gratuity and pension benefits. Photo: PTI.

The opposition also stepped up its attack against the government with Congress leader Rahul Gandhi urging Prime Minister Narendra Modi to listen to the voice of unemployed youths and not take “agnipareeksha (trial by fire)” of their patience by making them walk on Agnipath. Samajwadi Party president Akhilesh Yadav called the move “negligent” and potentially “fatal” for the country’s future.

Some military veterans have also slammed the scheme, saying it will adversely impact the functioning of the armed forces.

Serving and retired service officers have said that the scheme will adversely impact the armed forces’ organisational ethos and operational effectiveness, The Wire had reported. “One two-star Indian Army officer even advised the government to seriously rethink its implementation, as the force was not an ‘adventure camp’ for people seeking jollies and temporary employment, but one that dealt with matters of life and death,” the report noted.

Even retired Major General G.D. Bakshi, thought to be a supporter of the Narendra Modi-led Bharatiya Janata Party government, took to Twitter to express his disappointment.

Was flabergasted by the Agniveer scheme. I thought initially it was a trial being done on a pilot basis. this is an across the board change to convert Indian armed forces to a short tenure quasi- conscript forceLike the Chinese. ForGods sakePLEASE DONT do it

In a series of subsequent tweets, Major General Bakshi went on to detail his various objections to the scheme, claiming that it was taking India in the direction of the Chinese Army, citing the example of the current war in Ukraine where he claims conscripts are the weakest link, and highlighting the possibility of trained soldiers being forced to join terrorist organisations if not absrobed into the forces.

However, the government officials have strongly rejected criticism that ‘Agniveers’ could be a danger to society after their exit from the armed forces. “This is an insult to the ethos and values of the Indian armed forces. Youngsters who have worn the uniform for four years will remain committed to the country for the rest of their lives,” an official told PTI.

“Even now thousands retire from armed forces with skills, but there have not been any instance of them joining anti-national forces,” the officer said.

Those to be recruited under the ‘Agnipath’ scheme will be known as ‘Agniveers’.

Meanwhile, as protests turned violent in Haryana’s Palwal against the Agnipath scheme, mobile internet has been temporarily suspended in the district for 24 hours to stop the spread of disinformation and rumours through various social media platforms for the facilitation and mobilisation of mobs of agitators and demonstrators, news reports said.

The government on Tuesday, June 14, unveiled the scheme for the recruitment of soldiers in the Army, Navy and the Air Force largely on a four-year short-term contractual basis, in a major overhaul of the decades-old selection process.

Under the scheme, youths between the ages of 17 and a half and 21 years will be inducted into the three services. After completion of the four-year tenure, the scheme provides for retaining 25% of the recruits for regular service.

After the scheme was rolled out, the Army said it would ensure an enhanced youthful profile of the force and result in a “reduction in the average age from 32 to 26 years over a period of time.

There were apprehensions that the ‘Agnipath’ scheme would change the composition of several regiments that recruit youths from specific regions as well as castes such as Rajputs, Jats and Sikhs.

“No change is being done to the regimental system. In fact, it will be further accentuated because the best of ‘Agniveers’ will be selected, further boosting the cohesiveness of the units,” said another official.

On the criticism that the short-duration tenure of ‘Agniveers’ will harm the effectiveness of the armed forces, the officials said such a system exists in several countries, and hence, it is already tested out and considered best practice for an agile army.

The numbers of ‘Agniveers’ to be recruited in the first year would only make up 3% of the armed forces, they said, adding their performance will be tested before re-induction into the army after four years.

“Hence the Army will get tested and tried personnel for supervisory ranks,” one of the officials said.

Officials said most armies across the world depend upon their youths and the new scheme will only bring about a right mix of “50% of youth and 50% of experience” in the long run in the supervisory ranks.

They said the scheme has been launched following extensive consultations with serving armed forces officers in the last two years.

The proposal has been framed by the Department of Military Officers staffed by military officers, they said.

Under the scheme, the Army is likely to recruit around 40,000 soldiers, the Navy is expected to induct around 3,000 sailors and the IAF is set to recruit 3,000 airmen this year.

Sources said the government plans to have a centralised database on the Agniveers to keep track of the skills that they would acquire during their four-year tenure.