From Amit Shah to Arvind Kejriwal, Those in Power Have Failed Us

Instead of praying for peace at Gandhi's samadhi, the Delhi chief minister should have followed in Gandhi's footsteps. Parts of Delhi went up in flames for three days in the last week of February. Deadly communal riots erupted.

The few weeks before were filled with an eerie sense of foreboding. The violence was waiting to happen. It seems now that many politicians from the ruling dispensation, and lumpen goons from the Hindutva brigade, were in fact waiting in the wings, rearing to go.

How tragic and grotesque is it that even out of the death and ashes, many are now trying to seek political benefit? So many lives lost, so many livelihoods destroyed.

The ominous signs of impending violence hung in the air for weeks. The loud and open warnings from right-wing leaders, itching to light the communal flame, were unmistakable in public speech after public speech. There was a brazen public challenge thrown to the Delhi police under full media glare and in their presence by a defeated BJP MLA candidate, Kapil Mishra. If the police won’t disperse the peaceful protesters who have blocked roads, then he and his supporters will take the law into their own hands, Mishra said.

As if on cue, his followers marched into the throng of protesters brandishing guns, iron rods and sticks, and all mayhem broke loose. The police watched helpless, mutely waiting for instructions from above. By the time they gathered their wits and got their act together, a dozen were dead and parts of North East Delhi blazed in communal flames.

Even as a curfew was imposed on the second day, the fire and carnage raged unabated. The death toll is now at 47, including a police constable and an Intelligence Bureau worker. More than 200 victims have been injured, several of there are still in hospitals – suffering from bullet injuries, concussion by blunt instruments, etc.

Also read: Delhi Riots: What the State Government Must Do

All these years in India, protests were led largely by men, and of late often by young students. The ruling party tried always to absolve itself of blame when the police used excessive force, with the unconvincing excuse that the police had acted independently to maintain peace and order.

But Shaheen Bagh was a turning point in India’s history of protests, a watershed moment in civil disobedience since M.K. Gandhi. Shaheen Bagh was spearheaded by women who sat in protest and as the days wore by, people from many communities joined in and protested through songs and prayer offerings. This style of demonstration spread across the country and continued gaining momentum. Parts of North East Delhi witnessed similar sit-ins by women.

Now the government and police were flummoxed. They had no one leader whom they could lock up and charge with sedition so that the women would disperse. They had no clue how to react to peaceful protesters who were women. The simplest solution escaped them: the home minister could have shown grace, gone across to Shaheen Bagh and met the women. But arrogance and pride blinded the ruling party.

They counted, instead, on public outrage against the road blockade of arterial roads, garnering sympathy for the ruling party. The party hoped this would result in a political windfall of votes in its favour in the Delhi elections. But it was in for a rude shock – there was a thumping victory for Arvind Kejriwal and the Aam Aadmi Party.

The protests didn’t end. On the other hand the government’s contemptuous indifference only fanned the flames of protest to other parts of Delhi and rest of the country. Women across the country sat in peaceful satyagraha with determined steadfastness and resilience.

How do you use violence against women and children demonstrating with only songs and speeches of protest? What do you do when there are no signs of the protests dying down, but only gaining more support?

Cometh the hour, cometh the man – not only as a saviour but at times to destroy. A reckless politician came with a despicable idea. He threatened to break up the protests with his supporters, using force. The diabolical idea appeared brilliant to many. Especially the hapless police. Someone else was volunteering to do their job.

The BJP’s top leadership was busy serenading Donald Trump. They didn’t hear or see the gathering storm and what was so loud and clear for the rest of the country – their own party members were brazenly giving a call to arms and inciting their followers.

Whatever stories (true or false) the party’s IT cell or spokespersons may bandy now – that the Muslim community was behind the arson and riots, instigated by leftists, the AAP and the Congress – one thing is not in doubt. The Centre, especially a strong Centre as the BJP prides itself in being, could have planned well and acted preemptively, easily preventing the mayhem.

Since the police leadership, sadly, for decades now mostly owes its allegiance to the party in power and not to the rule of law, and capitulates to elected leaders under threat and duress not only in all states and but at the Centre too, one can hardly expect such a force to act with speed and in a non-partisan fashion. All retired, apolitical, distinguished police officers have now unequivocally said to the media that unless police reforms are implemented, there will be repeats of the Delhi riots. Every party that comes to power, though critical when in the opposition, has used the police to serve its partisan purpose. 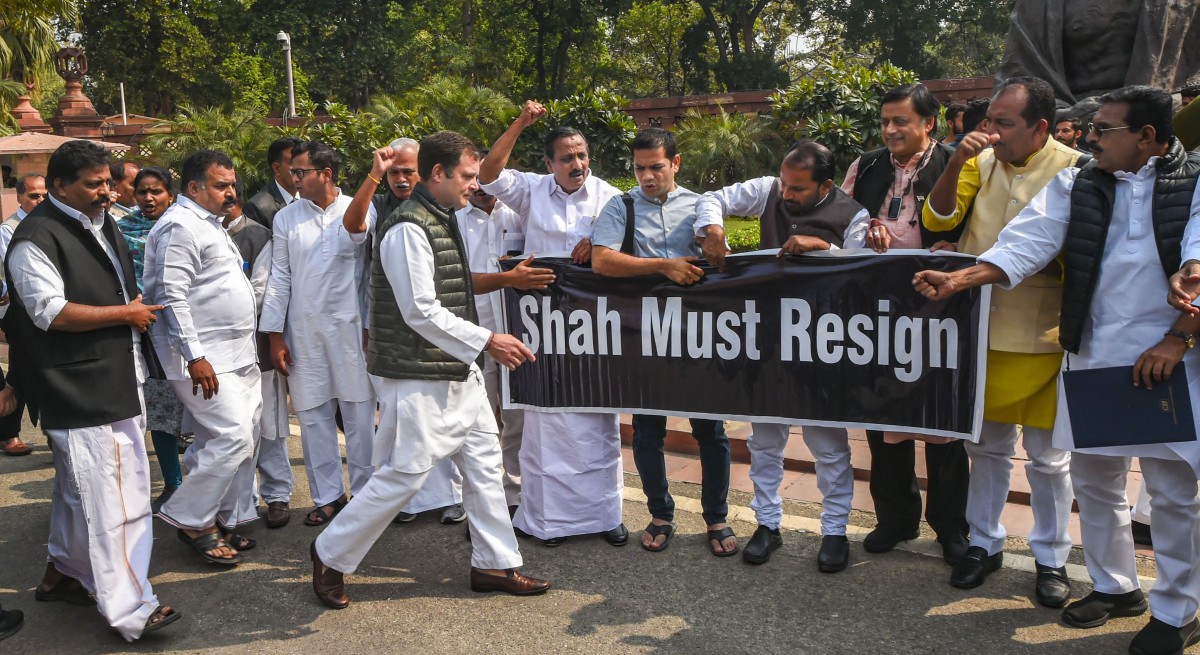 Congress MPs Rahul Gandhi, Shashi Tharoor and others during a protests over the Delhi riots at parliament on Monday, March 2, 2020. Photo: Shahbaz Khan/PTI

But where was Arvind Kejriwal, the chief minister of Delhi? Where were his party leaders when all this trouble was brewing? Had he not won a landslide victory? Was his victory only so he could watch TV silently, from the cozy comfort of his official residence, even as his state burned?

Instead of blaming the home minister for not deploying the Army, should he not have gone to the scene of the riots along with his leaders and lakhs of supporters, who catapulted him to power? Should he not have visited the areas of protest and pleaded for peace? Was he suddenly so helpless and spineless, the once roaring lion?

Was he trying to strategise what the politically correct and beneficial thing to do was, while his citizens were dying? Or was he sitting with his colleagues, debating the political advantages or disadvantages of dousing the fire? Whatever be his calculations, he has disgraced himself and his party. He has let down the people of Delhi and cannot be forgiven for having allowed the city to burn.

Kejriwal and his colleagues can be reminded of what Gandhi – whose samadhi they visited during the riots – chose to do. What did Gandhi do when riots erupted in Noakhali, Calcutta and other parts in 1946, 1947 and 1948, a few days before he when was assassinated? Where was he when Hindu-Muslim violence broke out and thousands were killed and raped, and dwellings were set on fire? Was he saying prayers in Birla Mandir in Delhi? Did he blame Jawaharlal Nehru and Sardar Patel or the provincial governments of the day?

No, Gandhi went to Noakhali and Calcutta to wipe the victims’ tears. He began fasts unto death and declared he would not end his fast till the killings and carnage stopped. He ended his fast in Calcutta only after leaders of both communities met him and agreed to end the violence.

Where do we go from here? Whom do people turn to now, with an irrelevant Congress and no other opposition to rely on? The chief minister and home minister, the two who together rule Delhi, sleep just a few kilometres from each other, not far from the carnage. Can they sleep after all this?

The Delhi elections are behind us. May be unspeakable things were said by the home minister’s party colleagues during the heat of elections, filled with hate. The home minister admitted after the defeat that his party may have lost because of such divisive slogans. But now the country has learnt once again that losing elections is one thing, but when the atmosphere is already charged with fear and foreboding, all it takes is a simple trigger to wreak havoc and destruction.

They can still redeem themselves by using the power of the state and the influence they wield over their followers to stop this madness. The leaders must sit down for a genuine dialogue with all political players, along with everyone from civil society including the protesters, and find a way forward that will bring back trust, harmony and peace.

We are tempted to say, “Gandhi! Thou shouldst be living at this hour – India hath need of thee.”