Media reports and visual evidence have contradicted the official line on how the case is being handled, the bench noted. 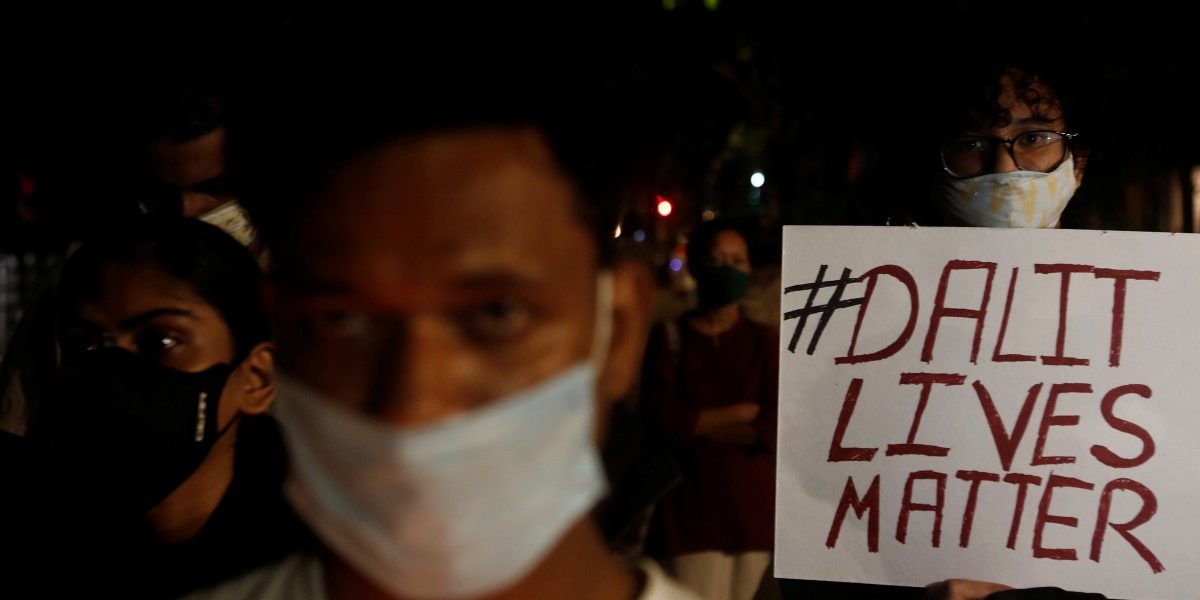 A man holds a placard during a protest after the death of a rape victim, on a street in Mumbai, India, September 30, 2020. Photo: Reuters/Francis Mascarenhas

Lucknow: The Uttar Pradesh government is unlikely to have expected the stern notice it has received from the Lucknow bench of the Allahabad high court on the Hathras gang rape case, which the Yogi Adityanath administration now seems intent on twisting and diluting.

Significantly, a division bench of the court, comprising Justices Rajan Roy and Jaspreet Singh, took suo moto cognisance of the ghastly incident in which a 19-year-old Dalit woman was brutally traumatised and gang raped, allegedly by four upper-caste Thakur community men in a village in Hathras district, about 175 km from the national capital, following which she died two weeks later in a Delhi hospital.

In its 11-page order, the court sought to remind the state government and its officials of their accountability to the Indian constitution and their responsibility to the people, particularly those at the lowest rung of society. It commences with Mahatma Gandhi’s famous quote in which he talked about ensuring the well being of the common man.

While quoting a para in Hindi by Gandhi, the bench stated, “This is a time to strengthen our resolve to live up to the ideas which ‘Bapu’ stood for, but, unfortunately ground realities are very different from the high values propagated and practiced by the Father of our Nation.”

To convey their anguish and outrage at the incident, the judges said, “Today, we find ourselves constrained to take cognisance of an extremely sensitive and important matter touching upon the basic 2 human/fundamental rights of the citizens of this country and residents of this State based on certain newspaper items and programs shown in the audio-visual media, according to which, a young girl of 19 years, a resident of District – Hathras in the State of U.P. was subjected to gang rape and in this process not only her bones were broken but her tongue was also mutilated presumably with the intent that she may not disclose the names of the perpetrators of this abominable crime.”

Describing her death as “unfortunate”, the bench expressed its deep anguish over the manner in which the woman was forcibly cremated by the police, who disallowed family members from attending the funeral. The court took note of how the cremation was carried out at the dead of the night without even permitting the family to carry out the last rites as per prevalent Hindu customs “in a decent and dignified manner”.

“The newspaper reports and the electronic media program/video clippings show that the family members kept demanding for the body and also informed the authorities that as per traditions followed by them, cremation cannot take place after sunset and before day break, yet, the District Authorities got the cremation performed, contrary to the traditions which the family followed,” the court held.

Quoting extensively from newspaper and TV channel reports, the judges seemed to have gathered various aspects of the incident, including the versions given by the police and the district administration. How the official claims were refuted by visually supported media reports was also explicitly spelt out in the order. “The incident has evoked disgust amongst the public at large as is borne out from newspapers, TV channel programs and has been condemned by all,” the order said, while adding, “the incidents which took place after the death of the victim on 29.09.2020 leading up to her cremation, as alleged, have shocked our conscience, therefore, we are taking suo moto cognizance of the same.”

The bench termed the hurriedly carried out cremation “a disregard of protocol and highhandedness by the police”. It expressed surprise over the fact that “As per media report, the moment the body of the deceased victim left Delhi’s Safdarjung hospital at 9:30 PM on Tuesday, the cremation was carried out 200 km away in Hathras five hours later, between 2.30 am and 3 am on the early hours of Wednesday.”

The judges have cited another newspaper report which mentions an official acknowledging, on the condition of anonymity, that “there were instructions to wrap up the cremation at night to prevent a “law and order” situation in the morning”.

Taking note of another media report, the court sought to point out, “the deceased victim’s brother is stated to have said that when the ambulance carting the body of the girl reached the village, her mother fell on their feet, the women from the family cried on the bonnet with folded hands. Her mother pleaded to put haldi on her daughter’s body, but no one heard their pleas.”

The order also took into account the counter claims made by the local superintendent of police, district magistrate and more particularly by the state’s additional director general of police (law and order) Prashant Kumar, who had gone about claiming, “the cremation was done in the presence of family members and with their agreement… The body was decomposing and that is why the family members agreed that cremating it late night itself would be better.” How such claims were refuted by several family members has also been pointed out in the order.

“We, in this regard, may refer to the decision of the Hon’ble Supreme Court reported in (1995) 3 SCC 248; Pt. Parmanand Katara Vs. Union of Inida (UOI) and Others; where the Hon’ble Supreme Court had an occasion to consider various facets of the Right to Life enshrined under the Article 21 of the Constitution of India. It agreed with the contention of the petitioner that right to dignity and fair treatment under Article 21 of the Constitution of India is not only available to a living man but also to his body after his death. It being the legal position, the deceased victim after her death was entitled to honourable, decent and dignified last rites/cremation to be performed by her family members in keeping with the customs and traditions followed by the family which as per the electronic media report was a follower of Sanatana/Hindu traditions, which, as alleged, was not allowed. If this is found to be true, then it would be a case of gross violation of basic human and fundamental rights enshrined under Article 21 and Article 25 of the Constitution of India in a most blatant and uncalled for manner something which is absolutely unacceptable in our country governed by Rule of Law and the Constitution.”

The judges even quoted Oscar Wilde to illustrate the meaning of dignity in death. “Death must be so beautiful. To lie in the soft brown earth, with the grasses wearing above one’s head, and listen to silence. To have no yesterday, and no tomorrow. To forget time, to forget life, to be at peace,” they pointed out.

Resorting to similar citations from other high courts in the country, they went on to add, “in the light of what we have stated hereinabove, we are inclined to examine as to whether there has been gross violation of the fundamental rights of the deceased victim and the family members of the victim; whether the State Authorities have acted oppressively high handedly and illegally to violate such rights as if it is found to be so, then, this would be a case where accountability will not only have to be fixed but for future guidance also stern action would be required.”

“The rights of individual citizens in the Country and the State especially that of the poor and the downtrodden such as the family members of the deceased victim and the deceased herself are paramount and the Courts of Law are under a bounden duty to see that the said rights available under the Constitution are protected at all costs and the State does not in its misplaced endeavour for political or administrative reasons transgress the limits of its powers to encroach and violate such rights, especially in the case of poor and the weak. We would like to examine as to whether the economic and social status of the deceased’s family has been taken advantage of by the State Authorities to oppress and deprive them of their Constitutional rights?”

“We have also pondered over the heinous crime committed against the deceased victim and though an SIT has been constituted by the State Government in the matter, we leave it open for our consideration on future dates, as to the necessity of monitoring the investigation or getting it conducted through an independent agency as per law.”

“Police Officials posted in the office of Director General of Police, U.P. at Lucknow having justified the cremation at night, we have taken cognisance of the matter,” the court added.

Fixing October 12 as the date for the hearing, the bench has directed Additional Chief Secretary/Principal Secretary (Home), Director General of Police, UP Lucknow, Additional Director General, Law and Order, UP, District Magistrate, Hathras, Superintendent of Police, Hathras to appear before the court and put forth their version with support of requisite material. “They shall also apprise the court about the status of the investigation relating to the crime against the deceased victim,” the order said.

While directing the Hathras district judge to ensure the presence of the victim’s family members during the hearing , the bench has also asked the state authorities to provide all logistical support for their food, boarding and lodging during their stay in Lucknow. “The state authorities are directed to ensure that no coercion, influence or pressure is exerted upon the family members of the deceased in any manner, by anyone,” the judges emphasised.

Meanwhile, they have also asked the court registrar to procure all published material with regard to the case from journalists, who were to be approached to assist the court with whatever else they have in support of their reporting.

While appointing senior advocate Jaideep Narain Mathur and advocate Abhinav Bhattacharya as amicus curie in the case, the bench directed the registrar to register the case as a public interest litigation.