Becoming a soldier is fundamentally a real and bare question of daily bread for the poor, unlike the romantic middle class notion of serving the country. 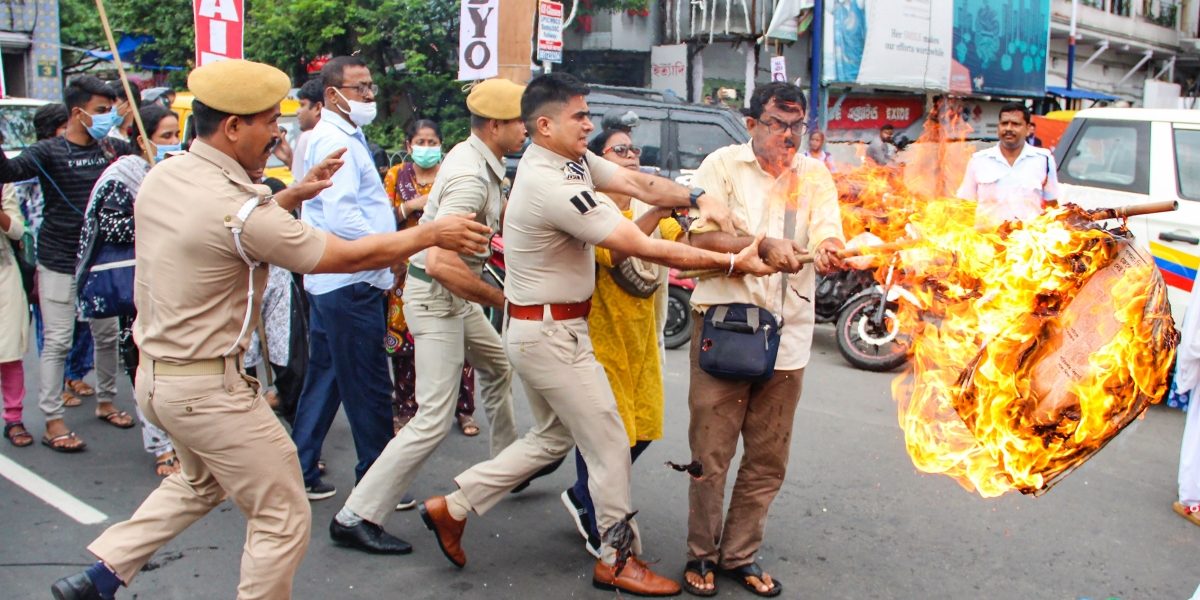 Police personnel try to snatch a burning effigy from a protester during a protest against the Agnipath scheme, in Kolkata, June 18, 2022. Photo: PTI

Though couched in the language of a patriotic employment scheme offering opportunities to the youth to serve Mother India, ‘Agnipath’ is a retrenchment scheme that hurts India’s jobless and compromises national security.

The routine annual open recruitment of around 40,000 soldiers will henceforth take place under the Agnipath scheme. The major difference is that only 10,000 of the inductees will still have jobs after four years whereas the other 30,000 will be ruthlessly retrenched. Thus, it is a scheme where only 10,000 jobs are provided annually in place of the 40,000 jobs generated earlier.

It also compromises with the nation’s security because the Army will gradually depend on a preponderance of poorly trained, contractually hired soldiers. Nevertheless, this employment reduction scheme is being dished out as a great employment initiative. Even the partial fulfilment of clearing the long pending backlog of one million jobs in various government departments is being touted as the creation of new jobs.

And both announcements have been declared simultaneously – as if the prime minister has declared war on unemployment, even though the war is on jobs

Even though the larger economic motives and social imperatives behind the Agnipath project have not been understood in its entirety by the larger public, the impact of the scheme which bars candidates above 21 years and renders 75% of recruits jobless after four years without pension benefits has triggered the anger of those who were desperately waiting for the call for recruitment. The government has responded to the rage on the streets by relaxing the age limit to 23 years for this year but this is not going to extinguish the fire that the scheme has lit, since it is not going to address the fundamental question of what happens to the new recruits four years later.

A major source of employment in states like Bihar, UP and Haryana – where unemployment riots have broken – is the Indian Army and Railways, apart from migration to work in the informal sectors of western and southern states. Thus, becoming a soldier is fundamentally a real and bare question of daily bread for the poor, unlike the romantic middle-class notion of serving the country.

The Agnipath shock comes months after the Railway Recruitment Board changed its eligibility qualification, leaving lakhs of aspirants high and dry. With the agricultural and unorganised sectors, which provide employment to the stay-behinds, heavily hit by demonetisation, goods and services tax and later COVID-19 and Modi’s lockdowns, north Indian youth pinned all their hopes on army recruitment. But Agnipath has come as a bolt from the blue.

India is facing a great unemployment crisis and Modi has aggravated the problem with his disastrous economic policies and now his neoliberal recruitment policies. Even though this resentment is manipulated at the time of elections by communal polarisation and last-minute labharthi handouts, the BJP government has failed to address the underlying economic problems.

That is why the promises made by BJP state governments – after sensing the simmering resentment – about reserving and giving priorities to retired ‘agniveers’ in police recruitment and the assurance of skill certificates and even degrees at the end of commission have failed to convince jobseekers.

People stage a protest against the Union government’s Agnipath scheme, on the Agra-Delhi National Highway, in Mathura, June 17, 2022. Photo: PTI

The whole scheme fails to pass minimum scrutiny under any consideration, least of all national security. If the aim is to keep the army young, Agnipath does not answer how an army can be fit and professional when half of its troops will be on short ‘tours of duty’ by 2032, according to Lieutenant General B.S. Raju. As another army veteran puts it, the Indian Army would become a ‘kindergarten’ force with most soldiers having no incentive to invest in learning or face risks.

On the other hand, how are these agniveers – armed only with a skill certificate which would be of no use in civilian life – expected to survive post retrenchment? What would be the societal risk and the social cost of dealing with a militarily trained, desperate army of unemployed young men? What kind of social anarchy is Modi leading India into? These questions have been raised by even those military veterans sympathetic to the ruling regime.

The only end that this scheme will meet – which seems to be the sole goal intended to achieve, is buried in between sentences and promises.

Thanks to the neo-liberal fiscal conservatism driving official policy, the government is desperate to reduce expenditure on salary and pensions. In the defence budget of nearly Rs 5 lakh crore, more than 2.6 lakh crore is spent on salary and pensions. The Fiscal Responsibility and Budget Management Act (FRBM), 2003, enacted to show India’s creditworthiness to global investors, mandates the Union and state governments to adhere to fiscal discipline by bringing the revenue deficit down to zero, and hold the fiscal deficit at 3% of GDP. In practical terms, this means the government must cut revenue expenditure and increase revenues to finance pro-capital reforms and spend on infrastructure required by global capital.

Though government expenditure is a major source of growth, development and survival in developing countries, the role of the state was recrafted as a facilitator and private capital was assigned the job of unleashing growth and creating jobs. Though it has failed in this task, neoliberal employment policies – contractualisation, fixed-term employment, withdrawal of social benefits – are being implemented in all sectors. Government recruitment too has increasingly become contractual, tentative and without pension benefits.

The Agnipath scheme brings this neoliberal policy to the army but the government failed to calculate the attendant social and political costs. In all probability, India is looking at another Modi-made disaster – in line with demonetisation, GST and the zero-notice lockdown of 2020.