Ladakhis were told by BJP leaders to vote for the party for getting Union territory status. Also key leaders in the region had pinned hopes on a dialogue on the Kashmir issue. Ever since the People’s Democratic Party (PDP) and the Bharatiya Janata Party (BJP) forged an alliance to form the government in Jammu and Kashmir in March 2015, there was widespread doubt among people in the Kashmir valley about BJP’s ‘sincerity.’ They knew the party would not respect the avowed ideology of its coalition partner which was in sharp contrast to its agenda of abolishing Article 370 which gives special status to J&K under the Indian constitution; and its strong opposition to talks with Pakistan and Hurriyat for resolving the Kashmir issue. Before its pyrrhic victory in the 2014 Assembly elections and the alliance with BJP, the PDP talked about resolving the Kashmir issue by engaging Pakistan and the Hurriyat Conference.

After a lot of dithering, PDP and BJP ultimately formed the government on the basis of a so-called ‘Agenda of Alliance’, which, among other things, mentioned holding political negotiations for resolution of the Kashmir issue, including a dialogue with the Hurriyat leadership.

But, soon after government formation, the BJP made an issue of the Hurriyat Conference leaders meeting the Pakistani High Commissioner in New Delhi.  This was a clear signal that the BJP was not serious (and sincere) about engaging with differing voices in Kashmir, not to talk of any ‘meaningful’ dialogue on Kashmir.

The public snub to late Mufti Mohammad Sayeed during a rally in Srinagar when Prime Minister Narendra Modi said he didn’t need anybody’s advice on Kashmir, also attracted significant attention from observers trying to read the dynamics of the relationship between the two parties and its leaders.

But, PDP failed to read the writing on the wall and continued the alliance at the cost of extreme displeasure among people in the valley who expected the party to deliver on its promises. Over the past three years, the PDP faced snub after snub, but went on with its coalition partner in the expectation of some miracle. 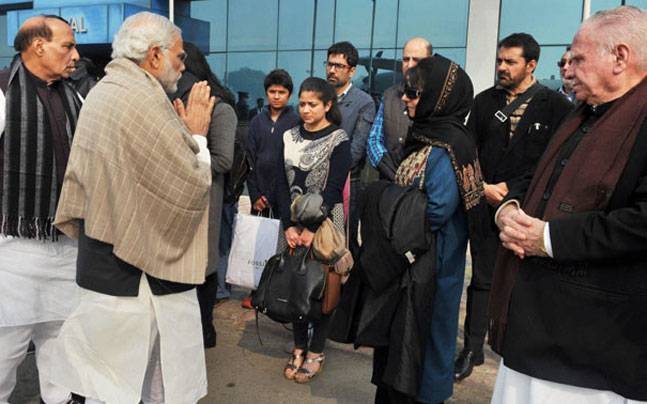 During his visit to Srinagar, PM Modi made no reference to the Agenda of Alliance despite CM Mehbooba Mufti’s appeal. Credit: PTI/Filed

Only last month, during Modi’s visit to Srinagar, chief minister Mehbooba Mufti had pleaded with him that the Agenda of Alliance should be fulfilled. But, Modi made no reference to the appeal, apparently because he thought PDP had got something to cheer about in the form a conditional ‘ceasefire’ after too much dithering three days before. Yet, there was no reaction from PDP.

In fact, the PDP thought it would positively consider its appeal of extending the Ramzan ceasefire, but the BJP, sensing an opportunity to shrug off the blame for deteriorating political, human rights and security situation in Kashmir, finally showed PDP how political opportunism actually works. It took away its support and broke the alliance on Tuesday, leaving the PDP high and dry. It would take no political pundit to say that the future of the PDP, at least in the immediate future, is quite bleak in the backdrop of its ill-conceived alliance with BJP. The party has been completely destroyed by BJP and it can blame nobody, but itself.

The booming tourism business in Ladakh, the breathtaking beauty of its landscape, purity of its mountain-air and overall prosperity in the region seem insufficient to keep the inhabitants of this cold desert happy in absence of fulfilment of their cherished political demand – getting Union territory (UT) status.

“UT status for Ladakh is a sentiment which runs in our blood”, is the reaction of an average Ladakhi, when asked about the demand.

Though the people of the region have been demanding UT status for Ladakh since 1949, New Delhi has never been able to consider it seriously given J&K’s autonomous status under Indian constitution’s Article 370 which gives powers to the state assembly to pass or reject the Central laws.

So, UT status for Ladakh essentially messes with the special status of J&K and the political ideology of Kashmir-centric National Conference (NC) and the PDP. On paper, NC seeks complete restoration of autonomy for J&K, while PDP goes a step further through its self-rule agenda for the undivided J&K which existed in 1947.

However, the BJP chose to ignore J&K’s constitutional reality, much in accordance with its agenda of abolishing Article 370, and promised Ladakhis UT status during its campaign for the 2014 Parliament elections and subsequently the Assembly and Hill Council elections. Ladakh is locally administered by Ladakh Autonomous Hill Development Council (LAHDC) in Leh and Kargil districts. LAHDC was created in 1995 under Ladakh Autonomous Hill Development Act 1995 to mollify Ladakhis following their prolonged political agitation in support of UT status.

Given the BJP’s stand on Article 370, the optimism of the Ladakhi people about BJP delivering on UT status was not misplaced. In the run-up to the 2014 Lok Sabha elections, the BJP had consistently talked about abolishing of Article 370 contending that there can’t be separate constitutions and flags in one country. Ladakhis were told by BJP leaders to vote for the party for getting the UT status.

Sure enough, this ensured the success of BJP candidate Chhewang Thupstan for the Ladakh Lok Sabha constituency and gave a thumping majority to BJP in the subsequent LAHDC elections. But the UT status remains as elusive as it was years before.

Over the past four years, the Ladakhis feel that BJP never tried to act on its promise even as the fresh general elections are round the corner. 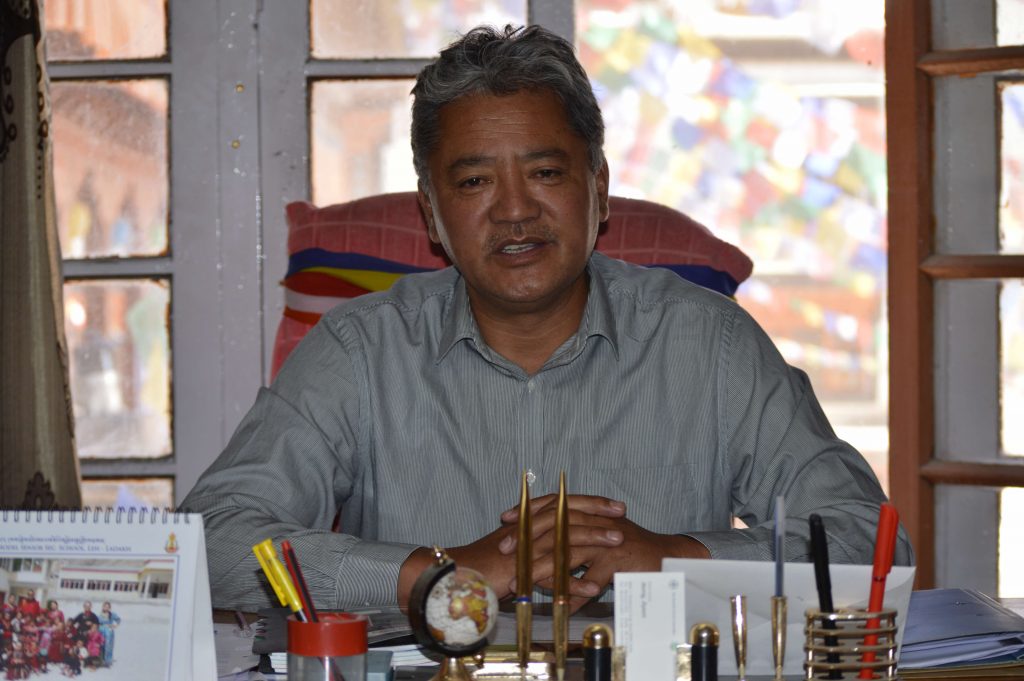 “The BJP has made a fool of us,” says P.T Kunzang, vice president of the Ladakh Buddhist Association. Credit: Athar Parvaiz

“Prime Minister Narendra Modi, during his visit to Leh last month didn’t even refer to the promise made by his party and his cabinet colleague, Nitin Gadkari, at our historic Polo Ground in Leh that BJP-led government in New Delhi would make UT status possible for Ladakh within six months should Ladakhis vote for BJP. Even Gadkari, who accompanied the PM, didn’t utter a single word about his own promise,” P. T Kunzang, the vice president of Leh-based socio-religious organisation, Ladakh Buddhist Association (LBA) told The Wire.
“So, the fact is that BJP made us a fool,” he added.

“During the campaign for Parliament, Assembly and Hill Council elections, almost every wall and every stone in Ladakh bore the slogan “Vote for BJP, UT for Ladakh.” And we are now heading towards fresh elections, but there are no signs of Ladakh becoming a UT,” said Lobzang Namgyal, a senior citizen of Leh. “We are a minority living in the mountains. They (BJP) found it easy to play a joke on us,” he added.

BJP’s Ladakh MP, Thupstan, who spearheaded the mass agitation in the early 1990s for Ladakh’s UT status, admitted that it was “unfortunate” that the BJP couldn’t deliver. “I joined BJP in 2010 with the hope that the party will ensure UT status for Ladakh. BJP had a clear stand on abolition of Article 370 which had given us the hope. But unfortunately, BJP had to form the coalition government with PDP after the 2014 assembly elections. PDP would have never agreed on Ladakh’s UT demand that is why it is on the back-burner,” Thupstan told The Wire.

Still pinning hopes on a solution on Kashmir

On May 28, the External Affairs Ministry summoned Pakistan’s Deputy High Commissioner in New Delhi to lodge a strong protest against Pakistan government’s Gilgit-Baltistan Order 2018 through which the Pakistan government has reportedly seized more powers from the local council.

The Pakistan envoy was told that entire territory of J&K, including Gilgit-Baltistan, is “an integral part of India” and “any action to alter the status of any part of the territory under forcible and illegal occupation of Pakistan has no legal basis whatsoever, and is completely unacceptable.”

Prominent Ladakhi scholar and historian, Abdul Gani Sheikh, termed this an extraordinary development as, he said, India has never laid such a claim before. “In this backdrop, it is interesting to see what kind of impact it would have on the UT demand being made by people of Ladakh and the overall Kashmir politics,” Sheikh told The Wire.

But  Thupstan still has an optimistic outlook. “Actually part of the solution to Ladakh’s demand of UT status lies in the resolution of the Kashmir problem. We are witnessing that there is a growing Chinese influence in Skardu and Gilgit-Baltistan. So, it would be in the interest of all the regions of J&K if India involves Pakistan and negotiates solutions like pre-1953 position for regions such as Kashmir, Jammu and Pakistan Occupied Kashmir and UT status for regions like Ladakh and such territories under Pakistan,” Thupstan told The Wire.

The BJP MP’s views are no different from former minister and the current Congress MLA from Leh, Nawang Rigzin Jora. “Let us understand that the people of all the regions of J&K have suffered a lot and thousands of people have got killed in Kashmir during the ongoing violence. We need to put an end to this and I think Union territory status for regions like Ladakh and quantum autonomy for regions like Kashmir needs to be thrashed out between India, Pakistan and various stakeholders in the erstwhile undivided empire of Maharaja which is now under India and Pakistan,” Jora told The Wire, adding that there is no historical background for any other state in India to demand similar autonomy.

“What was (Pervez) Musharraf formula? That was more or less the same; and had we gone ahead with that, a possibility would have emerged where the aspirations of all the regions of J&K would have been accommodated. But that didn’t happen because of his ouster,” he said.

Abdul Qayoom, president of Leh-based socio-religious organisation, Anjuman Moin-ul-Islam, said his organisation was for any settlement which does justice with every citizen and ethnic or religious group. “For example, we say that if and when UT status is given to our region, it should include Leh, Kargil, Skardu and Gilgit-Baltistan. And how that is worked out is the responsibility of the governments,” Qayoom told The Wire.

Commenting on the Centre’s recent decision of summoning the Pak envoy, Kunzang of LBA said it was not possible for either India or Pakistan to control all the parts of erstwhile undivided J&K. “So, what is needed is that both countries should sit and work out some solution. They have a lot of options available, but unfortunately there is no contact between the governments of India and Pakistan or with Hurriyat. A dialogue is needed with stakeholders,” Kunzang said.

Interestingly, these views from prominent Ladakhi politicians and social activists came before J&K was put under Governor’s rule after the fall of the PDP-BJP, clouding hopes for any dialogue, at least for now.