'These people will neither follow the law nor accept government orders,' the Uttar Pradesh chief minister said. 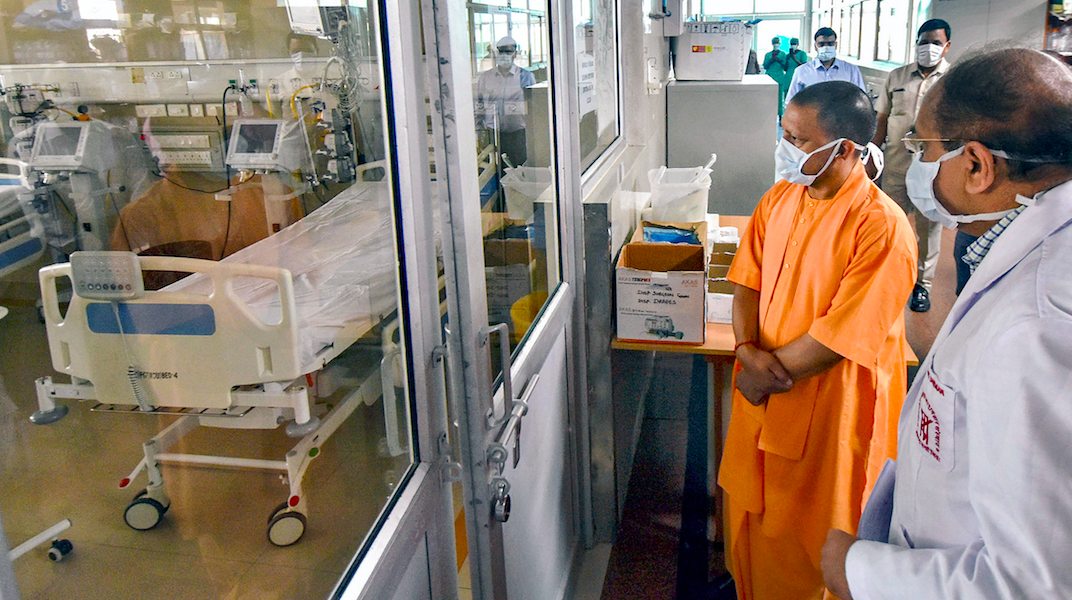 Uttar Pradesh Chief Minister Yogi Adityanath reviews the facilities which will be granted to coronavirus-affected patients, during a nationwide lockdown, at SGPGI in Lucknow. Photo: PTI

As many as 156 members of the Islamic sect were identified by the Ghaziabad police as part of the cluster that attended the TJ religious gathering in New Delhi’s Nizamuddin in mid-March. On April 2, the chief medical superintendent of Ghaziabad N.K. Gupta had accused around 10 persons isolated at the MMG District Hospital of moving around the facility “without trousers” and passing lewd comments at nurses.

Gupta told BBC that 90 TJ members have been isolated at the Sunder Deep College, while 56 were kept at Surya Hospital, Murad Nagar. The rest were in MMG Hospital. Acting on his complaint, the Ghaziabad district magistrate Ajay Shankar Pandey ordered a criminal probe against the inmates of the MMG Hospital’s isolation ward.

ANI UP first reported on the night of April 2 that the Ghaziabad police have ordered a probe on the complaint. However, the pictures that ANI posted in the tweet did not corroborate any of the medical superintendent’s accusations.

Ghaziabad: Police at MMG hospital conducting investigations into the allegations that persons from Tablighi Jamat who are in quarantine at the hospital are walking around the ward without their trousers on and making lewd gestures towards the nurses pic.twitter.com/x5Ar1Y8SEZ

On Friday afternoon, however, Uttar Pradesh chief minister Adityanath addressed the media on the matter, and said, “These people will neither follow the law nor accept government orders. What they have done against female health workers is a serious crime. We are charging them under NSA. We will not let them go them easily.”

Referring to an incident in which health workers were allegedly beaten up at one of the Muslim-majority areas of Indore, he emphasised that the UP government will not allow any such incident in his state.

It is unclear whether he used “these people” for the accused or for all TJ members. However, given how the TJ matter has taken a rabid communal colour, the chief minister’s generalising tone at this juncture is likely to fuel greater aggression against Indian Muslims.

One instance of such belligerence could also be seen in the Twitter handles of even UP government officials. While posting screenshots of Adityanath’s press conference on the matter, the chief minister’s media advisor Shalabh Mani Tripath said, “They have forgotten that this is Yogi’s rule. Here, we will cure people well, and also give proper ‘treatment’ to people. Chief minister Yogi ji has ordered immediate invocation of NSA against TJ members for their indecent behaviour against female nurses.”

He also likened TJ members to demons in a generic statement, while saying that they will be meted out “suitable treatment” on orders of Adityanath.

Earlier in the day, Kalanidhi Naithani, Ghaziabad’s senior superintendent of police told the media that acting on the complaint by the chief medical superintendent, the police has already started a probe against the accused TJ members under sections 354, 509, 269, 279, 271 of the Indian Penal Code. While sections 354 and 509 sections are related to assault on women’s modesty through words, gestures, and criminal force, the other three concern violating quarantine directives, negligence, and malignant acts that can likely spread infection.

It appears that slapping NSA on the accused was an afterthought of the chief minister himself, as SSP Naithani had not mentioned it while briefing the press.

Meanwhile, the state government also said that the stringent NSA will be used on all people who attack policemen trying to enforce the lockdown to prevent the spread of coronavirus.