Disregarding a Supreme Court order, the central and state governments have linked Aadhaar to a multitude of health and social security schemes. 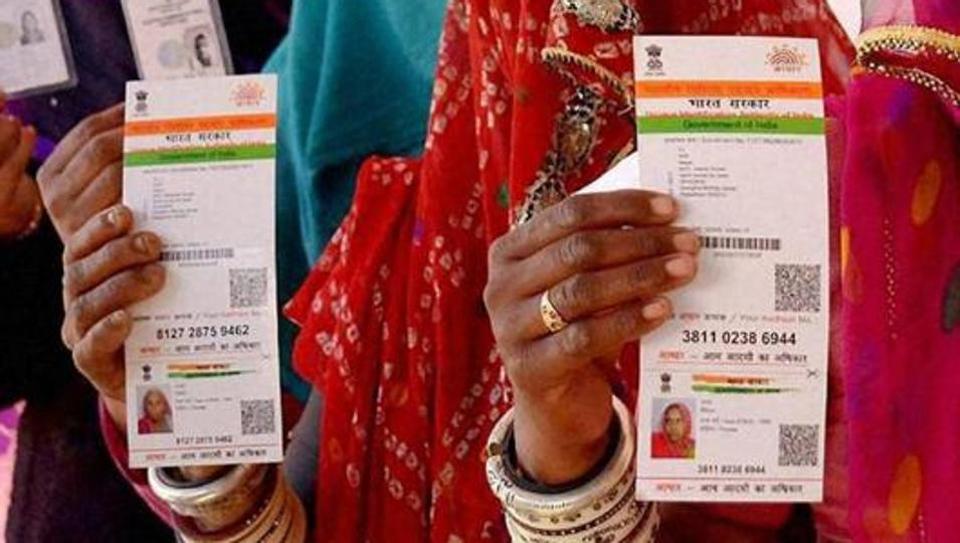 File photo of women in Ajmer holding up their Aadhaar cards. Credit: PTI

New Delhi: Following reports that a 28-year-old was denied an abortion she was legally entitled to in Chandigarh simply because she was unable to produce an Aadhaar card, 52 public health organisations and individuals have issued a statement condemning this trend.

“We demand that the linking of Aadhaar to health and other social services, including access to PDS be urgently revoked by the Centre and all states,” according to the statement. Labeling it as an arbitrary step and a violation of human rights, they have asked that the central and state government disseminate information widely to the public to ensure an immediate end to such violations.

The case in Chandigarh was of a 28-year-old domestic worker who was pregnant with her fourth child. She had sought an abortion from the well-known Post Graduate Institute of Medical Education and Research (PGIMER), a government hospital in Chandigarh. PGIMER, however, did not allow her to undergo an ultrasonography as she did not have an Aadhaar card. She ultimately approached an unqualified local physician for an abortion, but the procedure went badly and she had to be hospitalised for a blood transfusion.

The statement by health activists states that this case is a violation of the provisions of the Medical Termination of Pregnancy Act. It is estimated that in India, at least ten women die daily due to unsafe abortions.

No Aadhaar, no healthcare

Disregarding the Supreme Court order that Aadhaar could be demanded only for a limited number of services – such as an LPG connection – the central and state governments have linked it to a multitude of schemes and services.

Tuberculosis patients all over India need Aadhaar to receive the small cash amounts given by the government. In Uttar Pradesh, Aadhaar is required for calling an ambulance. In Madhya Pradesh, Aadhaar is required for anti-retroviral therapy. In Punjab, it is required for hepatitis C treatment. For a death certificate in Assam, Jammu and Kashmir and Meghalaya, Aadhaar is required. Karnataka demands an Aadhaar card for organ donation. Tamil Nadu has just floated a draft state blood policy for comments which seeks to track blood donors through their Aadhaar cards. In Maharashtra, a 23-year-old pregnant woman was turned away from a maternity home because she did not have an Aadhaar card. And just recently, at least six starvation deaths were reported from Jharkhand and Karnataka after people were denied their rations for not having an Aadhaar card. All of this is in addition to the woman in Chandigarh who was denied an abortion on account of not having an Aadhaar.

“This raises extremely serious concerns about privacy, confidentiality and ethics vis-à-vis the collection, storage and sharing of health data of patients, linked to Aadhaar over a platform, which has the potential to be accessed widely and used unethically.  Disclosure of personal health information also has the potential to reinforce stigma, discrimination and marginalisation of those seeking healthcare, leading to its denial and threat to lives,” according to the statement.

In an interview with The Wire, former Attorney General Mukul Rohatgi said he never intended for the Aadhaar case to be delayed for so long – the case has been pending since 2015. But on Rohatgi’s actions in court, the matter of privacy was referred to a nine-judge bench that ruled in favour of the right to privacy.

Even as citizens around the country are being denied their rights, the government has been stalling the hearing of Aadhaar cases in the Supreme Court.

Rohatgi, however, has strongly defended the Aadhaar and said that citizens would not be denied their rights on account of it.

On October 25, when the Aadhaar cases were mentioned in court, the attorney general asked for the hearings to be deferred to March 18, 2018. He suggested that the deadline for the “mandatory linking” of Aadhaar be pushed from December 31, 2017 to March 31, 2018.

Advocates for the petitioners objected to the government’s move to further defer the case, which has already been pending since 2015. The advocates also told the court about massive exclusions faced by people due to their Aadhaar cards and mentioned the issue of starvation deaths in Jharkhand.