Access to Justice, Amenities and Socio-Economic Security: How States Compare to Each Other

These topics make up three pillars of the Access (In)Equality Index, 2021, which studies the inequality of opportunities for households across India's states and Union Territories. 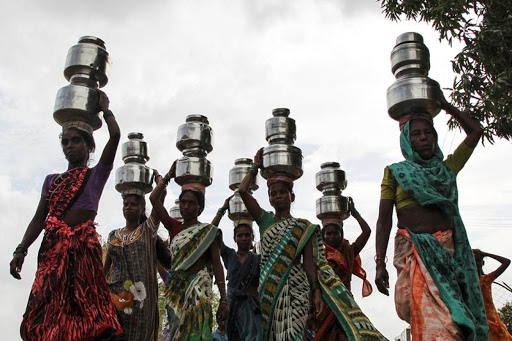 Representative image of women carrying pitchers filled with water from an opening made to filter water next to a polluted lake in Thane, June 2019. Photo: Reuters/Prashant Waydande.

This is the second article in a two part series on the observed findings of state-level performances from the Access (In)Equality Index, 2021. Read the first part here.

Over the years, with the development of the academic literature within inequality studies, multiple interpretations have existed of how ‘inequality of opportunity’ may arise because of factors or circumstances that are beyond an individual’s control. These feature conversations around concerns related to the “accessibility” and “availability” of basic resources or primary public goods.

With the aim of understanding inequality from the lens of such ‘means’ or ‘opportunities’ rather than merely focusing on ‘outcomes’ or ‘ends’, the Access (In)Equality Index by the Centre for New Economics Studies, O.P. Jindal University has evolved a multidimensional index that captures household/individual inequality from the perspective of access to key opportunities and ranks Indian states and Union Territories based on their pillar-wise performance.

The first article in this series provided an overview on the composite rankings of states across all pillars and their performance within the pillars of access to education and healthcare.

In this part, we present the state rankings and key findings of the other three pillars, namely, a) Access to Basic Amenities; b) Access to Socio-Economic Security and c) Access to Justice.

Basic amenities have been defined along the dimensions of clean drinking water, sanitation, clean energy, nutrition, housing and digital access. They contribute to a decent quality of life, allowing an individual (or a household) to have basic physiological capabilities and socio-economic opportunities.

Figure 1 below lays out the sub-index scores and the ranking of the states in access to basic amenities. As can be seen, Goa followed by Punjab, Kerala, Sikkim, Haryana, Mizoram, Gujarat, Maharashtra and Telangana are the Front Runners (index value is >0.71) in this sub-index. The index values for Achievers lie between 0.52-0.71.

On the other hand, Aspirants including Jharkhand, Odisha, Tripura, Uttar Pradesh, Madhya Pradesh, Chhattisgarh, Bihar, West Bengal, Meghalaya and Mizoram have underperformed, with index values below 0.48. Goa outperforms all the states with its high performance in all the above mentioned dimensions. 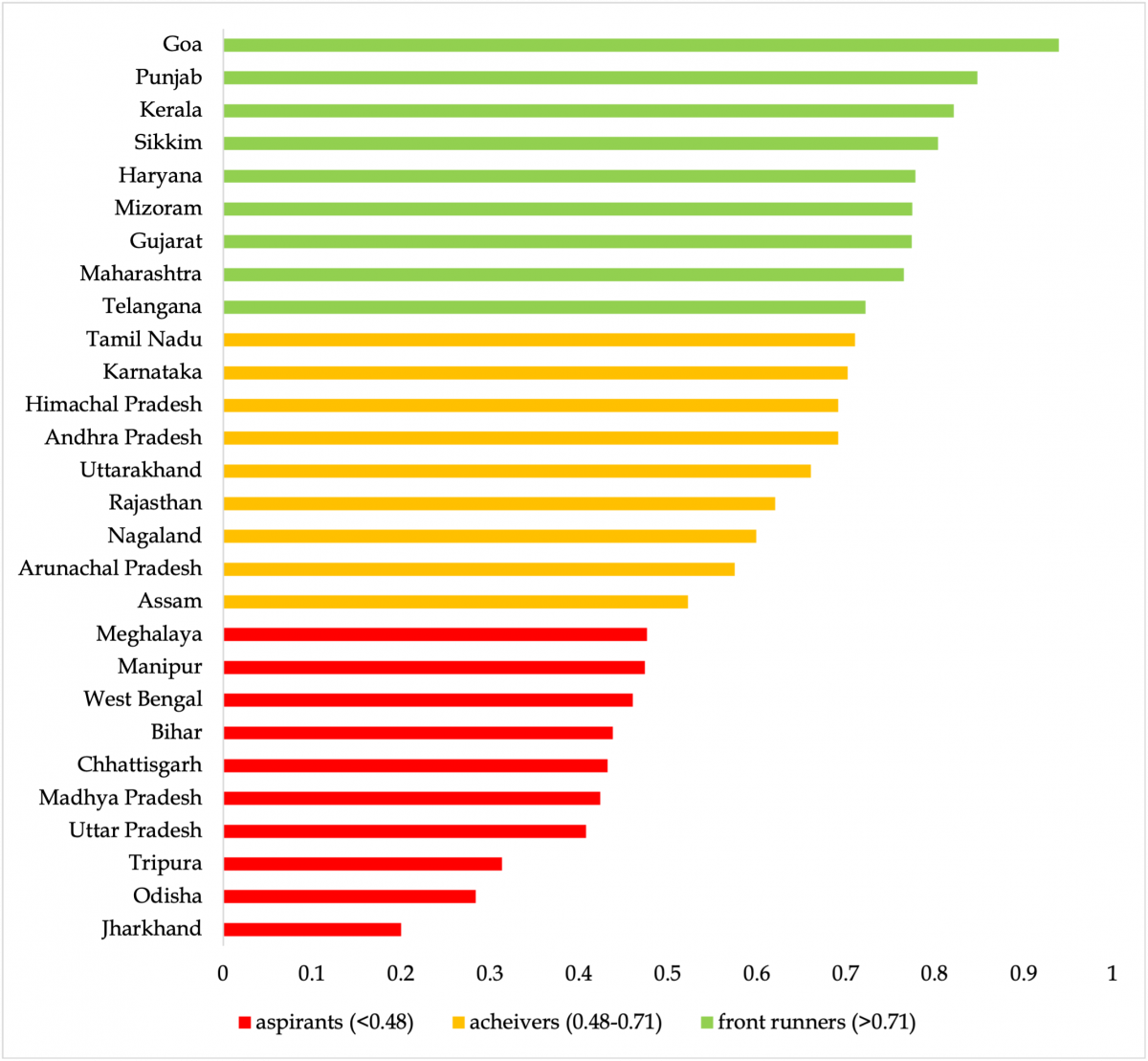 Access to sanitation has been a long term effort by the government as several campaigns have been run to eliminate open defecation and manage waste more efficiently. Not only does it lead to improved health outcomes but it is also gendered in nature, where residents who menstruate are unable to access other opportunities due to the lack of proper sanitation facilities. Gauging approachability to toilets and availability of water in them as indicators, the averages of the top five Front Runners for these indicators are 97% and 98% respectively.

The performance on good housing has not been very satisfactory. While the average of the top five Front Runner states indicates that 95% of the households reside in pucca houses, only 59% of these qualify as “good” under the categories of the NSSO surveys, indicating very low appropriateness in this dimension.

We find that on average, only 63% of households across states have access to clean fuel in India. This poses a gendered challenge as in Indian households, these chores primarily fall upon women. Moreover, data shows that almost 100% of households in Kerala, Sikkim, Goa, West Bengal, Manipur, Maharashtra, Gujarat, Himachal Pradesh, Arunachal Pradesh and Andhra Pradesh are covered under the Public Distribution System (PDS). However, the high rates of anaemic and undernourished women indicates that intra-household distribution of food access is important yet very difficult to measure.

Digital infrastructure has emerged as a basic amenity required to achieve several other outcomes including education, employability and even health to a certain extent. This has only become more important in light of the COVID-19 pandemic.

Individuals who have accessed the internet in the last 3 months (internet users) and individuals who are the main users of at least one mobile phone (mobile users) are the two indicators used to measure digital access. More than 50% of the populations of Goa, Punjab, Kerala and Haryana are internet users. The average mobile users for the top five Front Runners is 68%.

The sub-index score ranges from 0.77 to 0.24 (see figure 4 below). The Front Runners are Goa, Sikkim, Telangana, Himachal Pradesh, Tamil Nadu, Karnataka, Uttarakhand, Mizoram and Kerala which have index scores above 0.43. Jharkhand, Assam and Uttar Pradesh have the least access to socio-economic security. 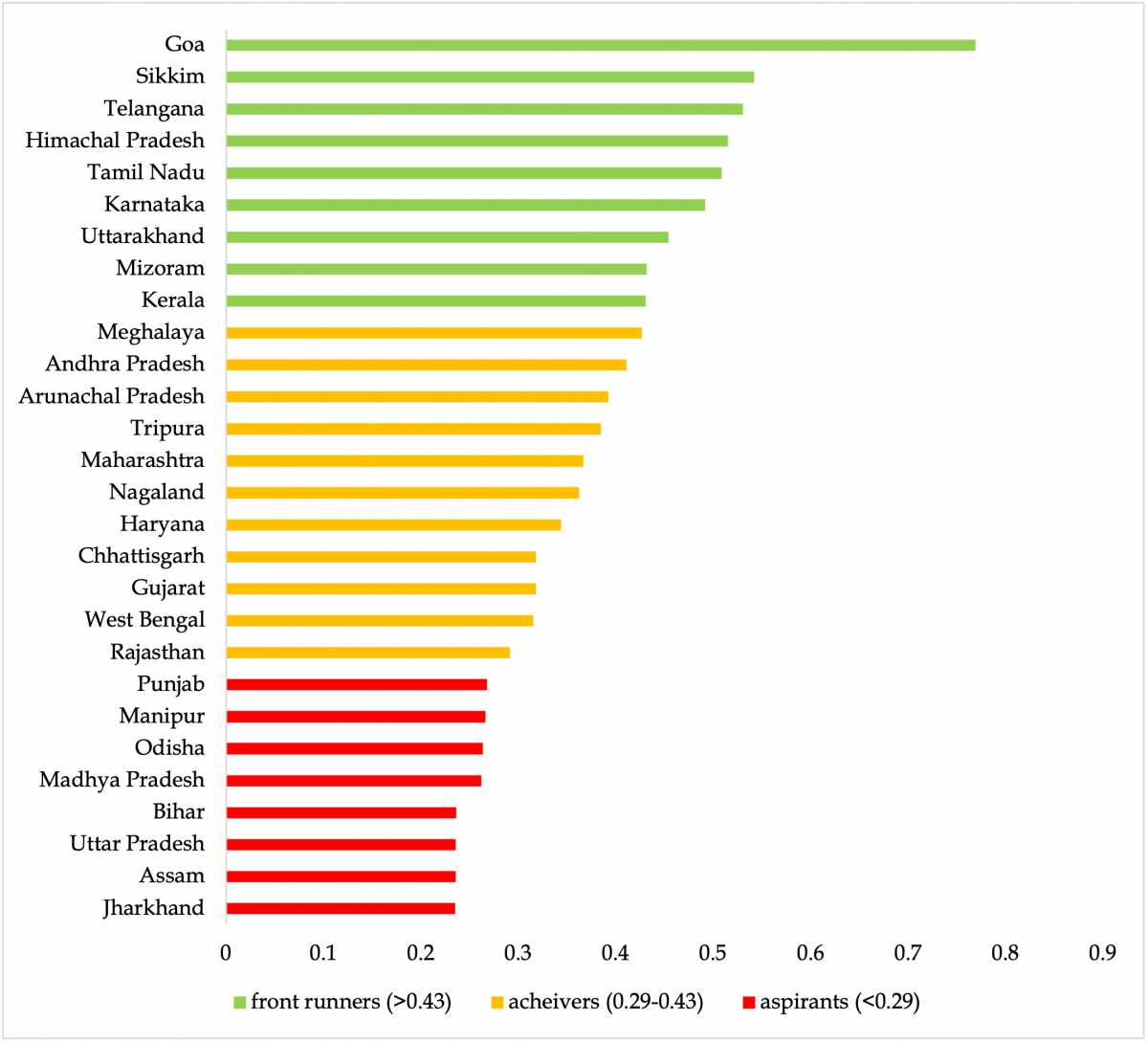 Economic security through work opportunities (availability), particularly through MNREGA in rural India, has allowed people to tackle extreme poverty. Northeastern states, – Mizoram, Nagaland, Meghalaya and Manipur – along with Goa, provide the highest access to rural employment under MGNREGA against that demanded whereas Bihar, Punjab and Chhattisgarh have the poorest performance in this aspect.

The Periodic Labour Force Survey (2018-19) also documents the number of employees in the non-agricultural sector in India that are not covered under any social security benefits. 88.6% of Mizoram’s regular wage/salaried employees have social security benefits as compared to the national average of less than 50%. We also look at Employees State Insurance (ESI) and life insurance. Telangana, Uttarakhand and Karnataka have the highest coverage in the latter.

A fair legal support system provides access to a safe and secure environment. The dimensions under this pillar are police, judiciary, prisons and legal aid and the indicators for the same include pending cases, human resources, physical and digital infrastructure and the representation of women. These contribute to stability and effective governance and further strengthen the mechanisms of timely justice.

Front Runner states of this sub-index are Sikkim, Nagaland, Tamil Nadu, Goa, Kerala, Andhra Pradesh, Himachal Pradesh, Gujarat, Telangana and Maharashtra with index values above 0.39. The Aspirant states include Uttarakhand, Meghalaya, Jharkhand, Karnataka and Assam with an index value below 0.32 (see figure 5 below). 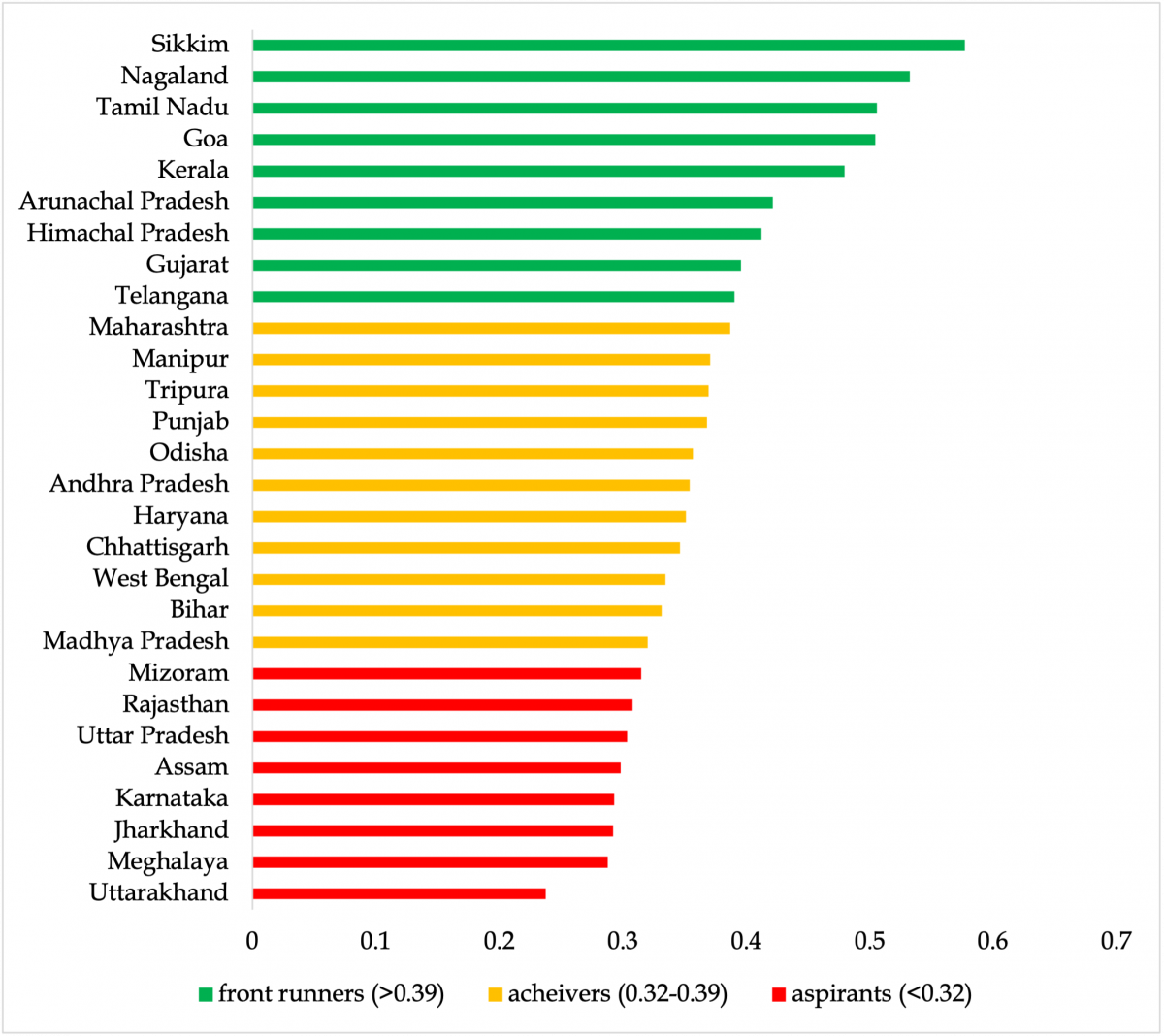 While the all-India average of police per lakh population is 236, – which exceed the ratio of 222 per lakh recommended by United Nations – states such as Bihar, Karnataka, Uttarakhand and West Bengal have less than 100 police personnel per lakh population. Furthermore, gender representation is a major issue in the police force with all states except for Tamil Nadu, Goa, Himachal Pradesh, Gujarat, Maharashtra, Bihar and Uttarakhand having only 10% women police personnel. Bihar has the highest share of women in the police force at 25.03%

Under the physical infrastructure of police stations measuring the availability and approachability, West Bengal has only 0.0065 police stations per thousand population and Arunachal Pradesh has the highest, with 0.861 per thousand population. The highest number of police vacancies are present in Uttarakhand and Maharashtra while Nagaland has no vacancies in this regard.

When evaluating the judicial system, the lower the population load on a high court judge, the higher the state’s ranking. The lowest population load per high court judge is on Sikkim (2,41,818) and the highest is on Andhra Pradesh (47,55,909). The share of women judges hangs low at a 10% in India. Additionally, Indian states suffer from a high rate of vacancies in high courts with Andhra Pradesh at a flustering 70.3%. In fact, Goa is the only state with a vacancy rate of less than 20%.

All the above factors combined lead to mounting pendency and time taken to solve a case. The proportion of civil and criminal cases that have been pending for up to one year in court is as low as 0.0158 in Sikkim to as high as 0.073 in West Bengal. Police pendency cases are the highest in Gujarat and the lowest in Manipur. The burden of inmates per officer is the highest in Jharkhand (381) followed by Bihar (337), Uttarakhand (331) and Chhattisgarh (266) with the lowest observed in Nagaland (11).

The National Legal Services Authority (NALSA) directed all legal aid clinics to have front offices available for interaction with those seeking legal assistance to overcome inequality in access to justice. However, this becomes redundant when in states like Uttar Pradesh and Odisha, one legal service clinic covers as many as 520 and 302 villages respectively.

Further examining inequalities that exist within social groups segregated based on gender, caste and place of residence (rural vs. urban), each pillar has its own set of challenges that need to be overcome.

Large disparities in access to basic amenities exist between rural and urban areas. Only 21.6% of rural households have piped water supply in dwellings or plots/yards and 76.7% have pucca houses as compared to 56.9% and 96% in urban households. Moreover, limited access to basic amenities adversely impacts gendered groups as women, who are responsible for household chores such as cooking, are at a disadvantage when it comes to intra-household food distribution.

Socio-economic services, too, are biased towards urban areas with only 33% of public and 22% of private banks being located in rural areas. While employment opportunities under MNREGA are higher in rural areas, coverage of regular wage and salaried employees under social security benefits is higher in urban areas (50.6%).

Overall access to justice is skewed against individuals residing in the rural parts of India as courts, police stations and legal aid institutions are mostly situated in urban areas. In terms of access to a fair legal environment, as many as 55% of citizens under trial across the country are either Muslims, Dalits or tribals, who make up 39%of the population, indicating a potential bias in arrests.

Our observed findings from the index emphasise the need for targeted policies and action plans by the state and Union governments and other relevant authorities. This will help in addressing inequalities and in creating an equitable environment for all sections of society. The rankings provide motivation to Aspirants and Achievers to learn from the Front Runners such that the relevant policies and programs can be executed efficiently. This is especially important, given that the pandemic has exacerbated economic and social inequalities.