How Do Indian States Measure Up In Providing Access to Basic Social and Economic Services?

Unpacking the findings of the Access (In)Equality Index, 2021, which measures and studies the state of inequality of opportunity visible among households for states and Union Territories across India. 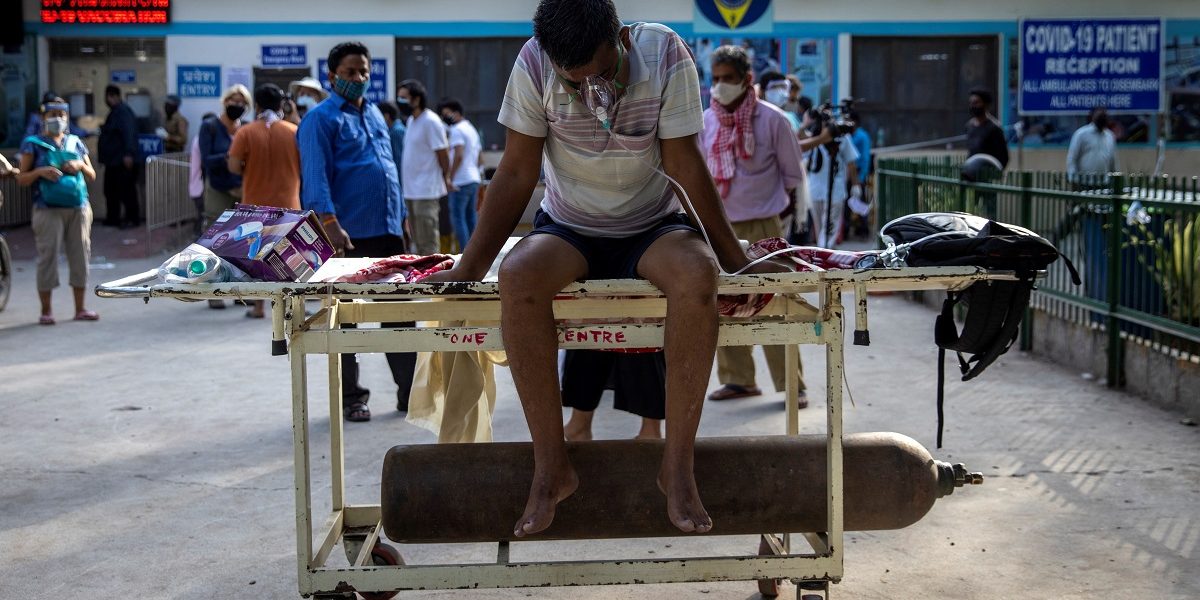 Note: This is the first article in a two-part series disseminating the observed findings of state-level performances from the Access (In)Equality Index, 2021.

Oxfam India’s 2021 report on inequality found that since March 2020, when the COVID-19 pandemic began, India’s billionaires have increased their wealth by 35%.

In one of the sections of the report, Oxfam states: “Extreme inequality is not inevitable, it is a policy choice.”

The multi-faceted discourse of inequality studies has evolved in recent years. In particular, many argue that there is a need to develop a more holistic idea around measuring and studying inequality. One that goes beyond measuring income and consumption patterns across households – as important as that may be.

Moreover, for a large developing nation like India, deeply fragmented along the social lines of caste, class, religion and gender, it is the rising inequality of opportunity that merits a closer look.

In a recent study undertaken by the Centre for New Economics Studies at O.P. Jindal Global University, we, the authors, have attempted to create an index to measure and study the state of inequality of opportunity – in terms of access to basic social and economic services – visible among households for states and Union Territories (UTs) across India.

Although “access” in general means a way of approaching, reaching or entering a place, as the right or opportunity to reach, use or visit, it is here broadly conceptualised to encompass the “4As” – availability, approachability, affordability and appropriateness.

Our index includes five fundamental pillars of assessment for states across India: 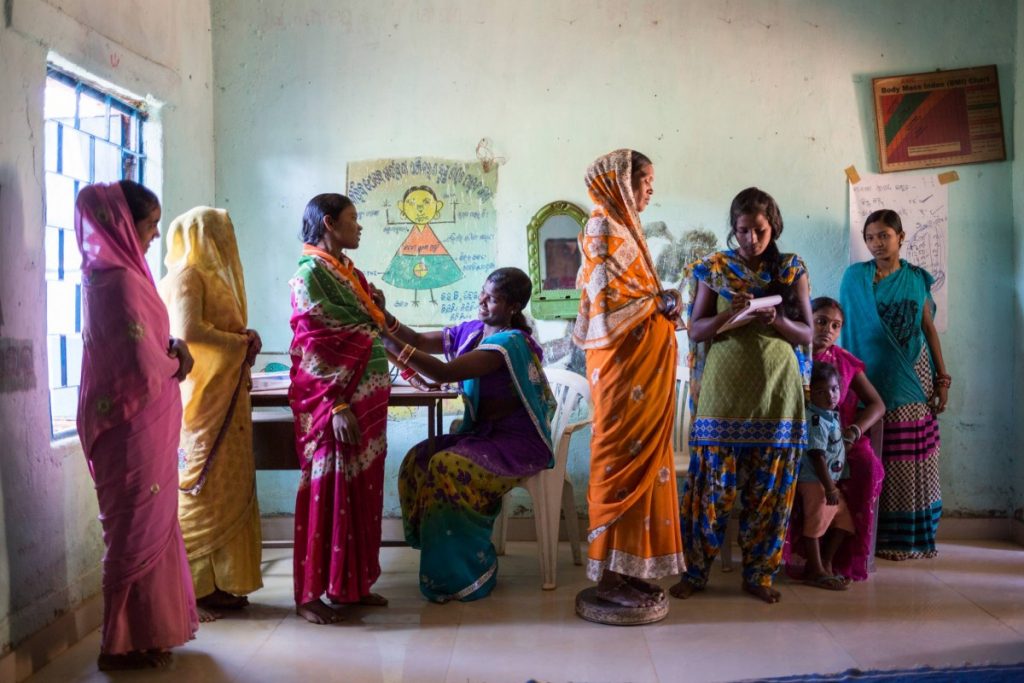 In the methodological design of the Access (In)Equality Index, we measure overall access, using geometric mean in order to ensure partial compensability, i.e. poor performance in one sub-index is not fully compensated by good performance in another.

It also balances the uneven performance in the dimensions and encourages improvements in the weaker dimensions. Other prominent indices like the Human Development Index and Sustainable Society Index use the geometric mean for aggregation as well.

Bihar, Uttar Pradesh, Jharkhand, Assam, Odisha and Madhya Pradesh fall under ‘Aspirants’, requiring sustained efforts to improve ‘access’ to basic socio-economic opportunities (across all identified pillars). Jharkhand in particular needs special attention as it ranks among the bottom few ranks across all pillars.

States like Maharashtra, Arunachal Pradesh, Gujarat, Uttarakhand, Chhattisgarh, Rajasthan, Tripura, West Bengal, Manipur and Meghalaya are categorised as ‘Achievers’. These states have good provisions of access to opportunities and must sustain their efforts to advance to the next category.

Goa has the highest average score, seeing a better geographical coverage of services and implementation of sustainable development goals (SDGs).

Let’s break down the performance of states based on two of the pillars.

As universal turnout of elementary education has been achieved by India, we focus on secondary education as the next fundamental level of access and study the performance of states. The sub-indicators include net enrolment ratio, net attendance ratio, average annual dropout rate, average household expenditure per child, pupil-teacher ratio, secondary schools at a distance of 2 km, availability of toilets for girl, schools offering vocational education, per capita spending by state governments and digital infrastructure such as functional computer and internet facilities.

Figure 1 below depicts the hierarchical standing of all states in terms of access to secondary education along with their index scores and categories. 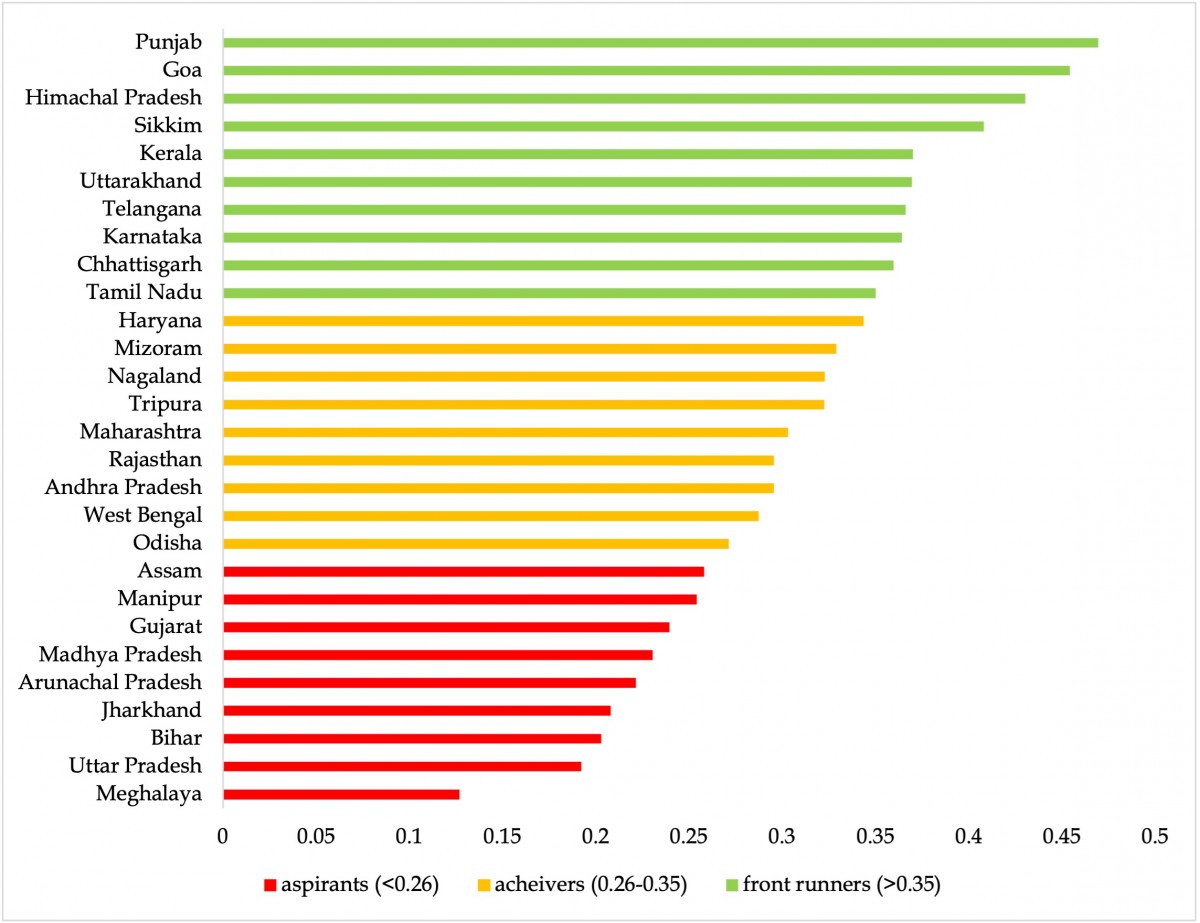 The average sub-index score for access to education is 0.30.

Punjab has done remarkably well in improving the access to secondary schooling and implementing good infrastructure facilities which are reflected in various indicators such as low dropout rate and high enrolment. It registered a zero-dropout rate for girls at the secondary level which is highly correlated with a high percentage of schools with girl’s toilets in this state.

The better implementation of the Right of Children to Free and Compulsory Education has resulted in improved enrolment rates with Punjab and Kerala at 81.5% and 74.1%  respectively.

To understand the government’s priorities in providing affordable access, we computed the per capita spending by state governments on secondary education in 2018-19. This is highest for Sikkim followed by Uttarakhand and Goa and lowest for Jharkhand, Bihar and Uttar Pradesh.

Furthermore, social factors like pre-defined patriarchal roles of men and women prevent about 30% of adolescent girls from attending school as girls are engaged in domestic activities instead of schooling. Female attendance is the highest in Telangana (77.5) and lowest in Uttarakhand (36.4).

The appropriateness of this pillar is assessed by the pupil-teacher ratio and schools offering vocational training at a secondary level. The required student-teacher ratio in government secondary schools, according to the Rashtriya Madhyamik Shiksha Abhiyan (RMSA) framework, should be 30:1.

Bihar, Jharkhand and Gujarat are the only states which do not meet this threshold. When it comes to vocational education, in absolute terms, Uttar Pradesh, Rajasthan and Maharashtra have the highest number of schools having vocational courses under the National Skills Qualification Framework (NSQF).

Lastly, accessibility to education through digital means reflects on gaps in remote and digital learning infrastructure across states in India. For the academic year of 2019-2020, UDISE+ revealed that only 22% of all schools had Internet and 37% had computer facilities.

This low penetration of digital education formed the base for the increased inequalities in distance learning induced by the pandemic. To add to the inequality, India has been slower than other countries in reopening schools – an observation made by economist Abhijeet Banerjee earlier.

India’s healthcare system, just like any other nation’s, was put to the test by the COVID-19 pandemic. Despite being one of the largest sectors in terms of employment and revenue generation, health outcomes for the majority of the population have not improved (see here for previous analysis). It is important to understand that health outcomes such as life expectancy and mortality rate depend on the available means in health facilities. 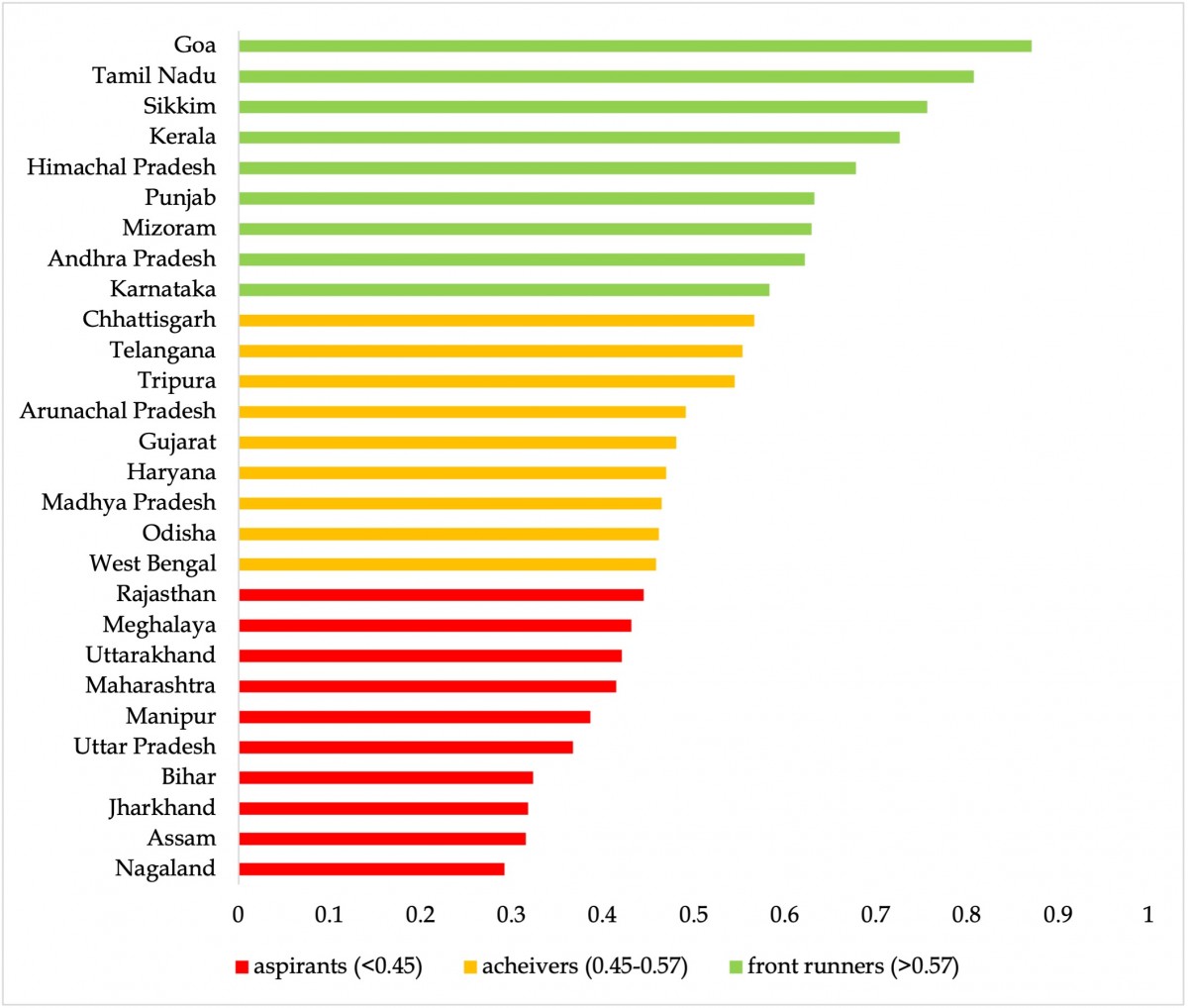 As can be seen in figure 2 above, the ‘Front Runners’ (index value greater than 0.57) are Goa, Tamil Nadu, Sikkim, Kerala, Himachal Pradesh, Mizoram, Andhra Pradesh, Punjab, and Karnataka. Nagaland, Assam, Jharkhand, Bihar and UP are some of the Aspirant states (below 0.45).

The disparities across states are quite visible and reflect the priorities of the state governments in making services and provisions available to its existing and potential voters. Public spending on health by the Union government (appropriateness) has been stuck at around 1% of GDP for close to 15 years and is one of the lowest in the world.

On average, the top five states have 0.054 hospitals available for a population of 1,000, however, this is far below the global standard. Similarly, availability of government hospital beds per 1,000 population is as low as 0.009 in Uttar Pradesh and as high as 2.2 in Sikkim.

While these figures reflect on the availability of healthcare facilities, its approachability is measured from the average radial distance covered by sub-centres that act as the most peripheral healthcare contact for outreach communities.

The all-India average distance covered is 2.6 km with state differences ranging from 4.26 km in Mizoram to 1.4 km in Kerala. Even the proportion of household members covered under health insurance is very low in India (Assam is the lowest with only 10.4% of the households covered).

Reproductive and child healthcare indicators have improved over the years yet remain unsatisfactory. Only 65% of children in India receive full immunisation during the first year of their life. UP, Bihar, Jharkhand, West Bengal, Nagaland, Assam and Arunachal Pradesh have the least immunisation coverage.

In 2015-16, on average, 57% of mothers had received postnatal care from a healthcare personnel within 2 days of delivery and 63% received at least 4 antenatal care visits. All the factors combined lead to Northeastern states ranking really poorly in this pillar.

Our next part in the series will showcase findings from the Index made across the remaining three pillars: Access to Basic Amenities, Access to Socio-Economic Security and Access to Justice for states-UTs across India.