While the MHRD's advisory says that Modi's 'light a lamp' call may be followed, insistence by some schools on counting participation and app installs shows a more concerted push.

New Delhi: Immediately after Prime Minister Narendra Modi urged people to light candles and lamps in their homes on April 3, 2020, the Ministry of Human Resource Development (MHRD) shot into action, instructing schools and colleges under it to encourage students and staffers to participate in the event.

While the prime minister had made his appeal sound like a voluntary act by citizens to show their solidarity in the fight against the novel coronavirus, the MHRD’s letter indicates that the Union government is also seeking to follow up.

In a letter dated April 3, MHRD secretary Amit Khare wrote that students may participate in the event to “to realise the power of light and to highlight the objective for which we are all fighting together.” 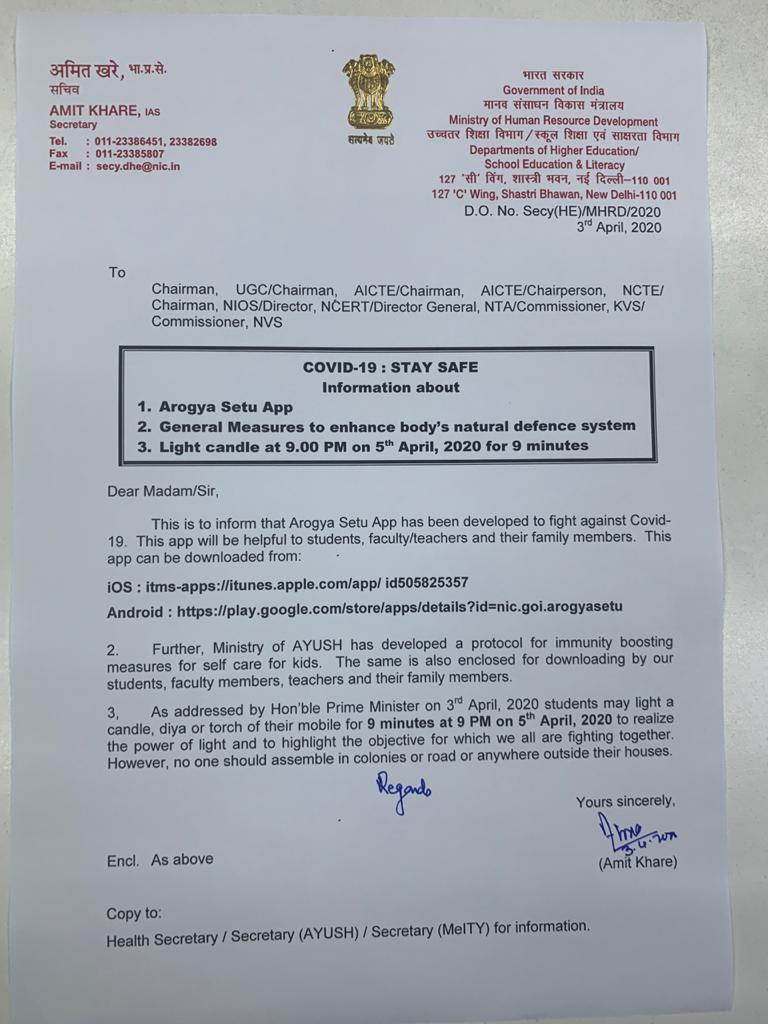 Moreover, the letter asked schools to urge students and their parents or family members to download the newly-launched government app Aarogya Setu, and download the AYUSH ministry’s protocol for “immunity boosting measures for self care for kids”.

Taking a cue, the Central Board of Secondary Education circulated a letter to all schools following its curriculum, including privately-managed ones, informing them of the MHRD’s advisory.

The Wire spoke to principals of a few privately-run schools in Delhi and Chennai. All of them confirmed that they had got the circular from CBSE to pass on the three-point instruction before the evening of April 6, 2020.

“We have asked our students and teachers to download the Aarogya Setu application by April 6. We have also emailed parents of our students to encourage them to light a diya on April 5. We received the notice on the morning of April 4. Although it is quite difficult for us to enforce all the directives in a day or two, we have somehow been able to do it,” the principal of one renowned school in north-west Delhi told The Wire on condition of anonymity.

A teacher at a Noida-based school, too, said, “All teachers have been asked to send clear instructions to our students to participate in the ‘diya jalao’ programme. I have asked my students to download the Aarogya Setu application but there is no way to verify whether all of them have done that or not. The schools are not functioning.”

When contacted, the principal of a prominent school in South-East Chennai acknowledged receiving intimation of the MHRD notice and noted that all teachers had been informed on Saturday evening.

“We will look to get a rough headcount of how many students have participated. There is an internal communication channel called Yokibu through we disseminate information. Apart from this, there are other informal WhatsApp groups, where we will also collect photos of the students lighting lamps today along with their families,” the principal, who declined to be identified, said.

Although the MHRD order only recommends that schools implement the three-point directive, the principals with whom The Wire spoke claim that the CBSE has apparently circulated a Microsoft Excel sheet that requires the heads of schools to give out details on the number of teachers and parents who downloaded the Arogya Setu application, or the number of students who “participated in candle lighting on 5th April at their home”.

The CBSE, however, has denied that the exercise is mandatory. Nevertheless, the details sought from some schools, in a way, has made the whole exercise compulsory for them, even as on paper it is meant to be only a voluntary act.

A screenshot of the excel sheet circulated to some schools which has to be filled out. Credit: The Wire

Parents from some Delhi schools have also received a Google form to fill in, asking who in the family downloaded the app and whether or not the child was lighting a diya at 9 pm on April 5. 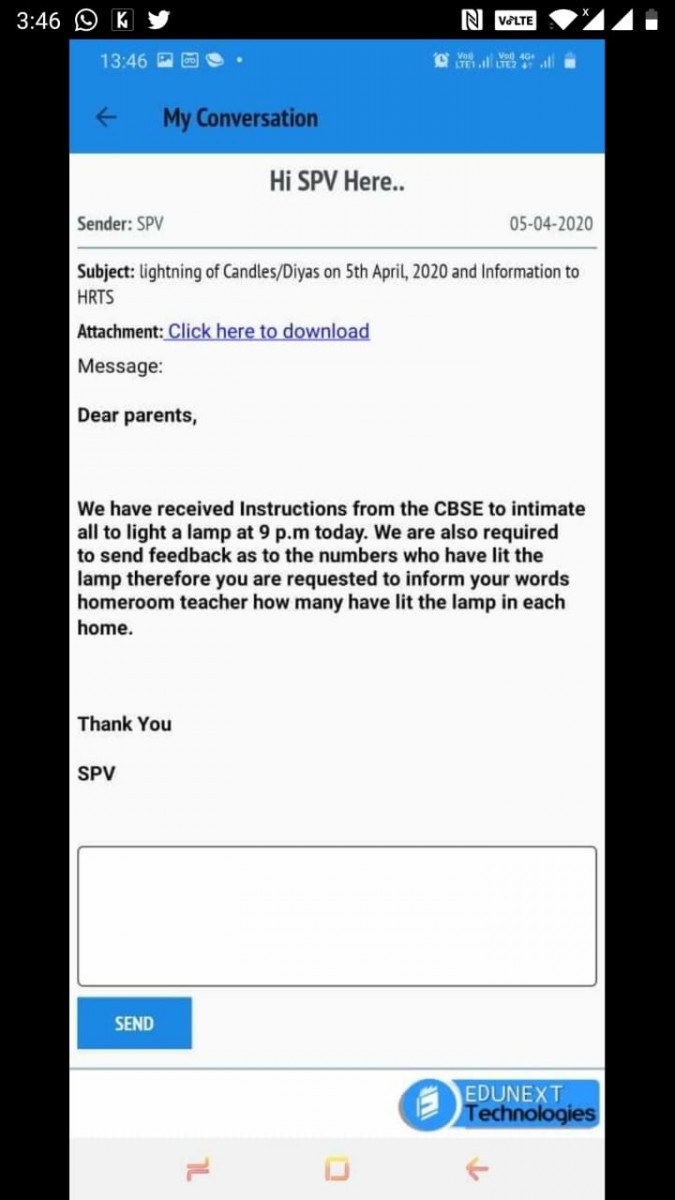 An example of a notice sent out by one school, asking for a tally of how many students participated in Modi’s diya ceremony. Credit: The Wire 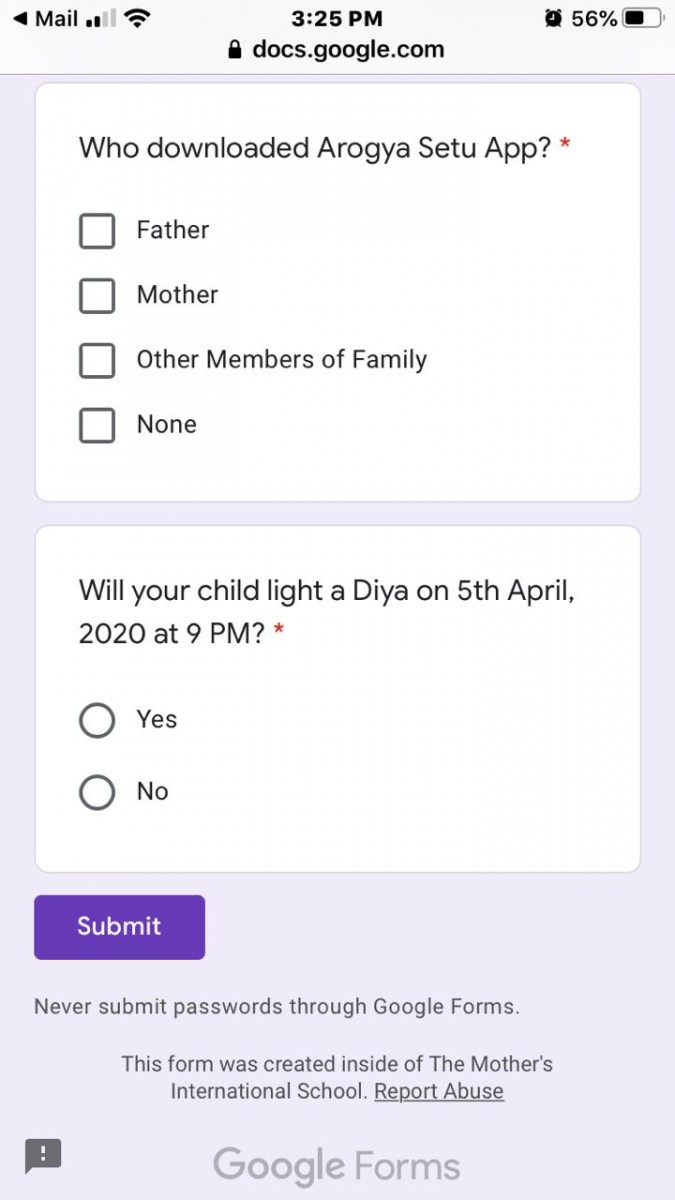 An example of a Google Docs form sent out by a Delhi school to parents. Credit: The Wire.

A separate letter sent by MHRD Joint Secretary Maneesh Garg to various state education departments and the boards of school education also emerged in the public domain late on Sunday night. Garg’s letter asked its recipients to “widely circulate” the ministry’s three-point advisory “to students, teachers, officials and parents for maximum participation” and asked them to urgently convey an “action taken status in this regard” to the email address of a ministry official.

It appears that it was on this basis that many schools swung into action. The government appears to have clarified later that the letter was “only meant to inform the students to voluntarily download the app and participate in the diya lighting” and that the “action taken report sought from state education officers is only meant to get feedback whether necessary information has been disseminated by them”.

Nevertheless, other government organisations also prodded students into taking action. For instance, all those who had applied to take entrance examinations conducted by the National Testing Agency (NTA) also received an email from the organisation that instructed them to follow the three-point directive by the MHRD.

The notice sent out by NTA. Credit: The Wire.

Other government departments are also encouraging their employees to sign up for the Aarogya Setu app. For instance, several departments in the Indian Railways received a request for employees and their families to download the application.

A document sent out to Railway units includes asking them to calculate and record the number of ‘app installations’ done by staff and their families and notes that this will be uploaded to e-Drishti, the national transporter’s internal software system. 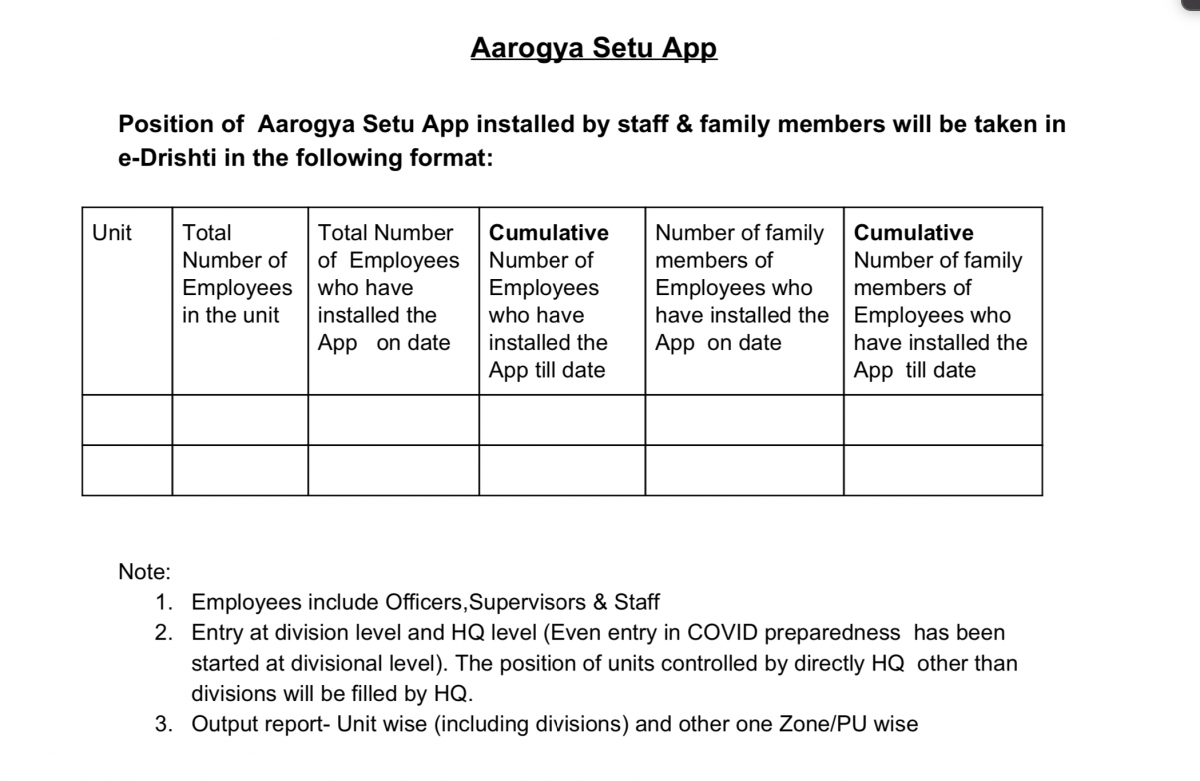 A copy of the notice sent out to some Indian Railways department heads.

On April 3, Ram Madhav, the national general secretary of the Bharatiya Janata Party, had also tweeted asking people to download the Aarogya Setu, saying that it allows the government to “access your location always”. Curiously, he deleted it within minutes, despite the fact that it had already been retweeted 100 times.

The Aarogya Setu or ‘Health Bridge’ app is a contact tracing mechanism that is designed to inform people if they come into contact with a COVID-19 infected patient.

This is the app’s modus operandi: once a user downloads Aarogya Setu, it asks them for their personal information and more crucially, permission to keep both GPS and Bluetooth on permanently.

By doing this, the core function of the app plays out in two different ways. Firstly, if a user ever comes in the vicinity of an infected patient, it warns them – although it could be that most times that the user will have started to feel symptoms before an alert actually comes through.

Secondly, if the user herself tests positive for COVID-19, people who have been in and around their vicinity will be alerted to go get tested. 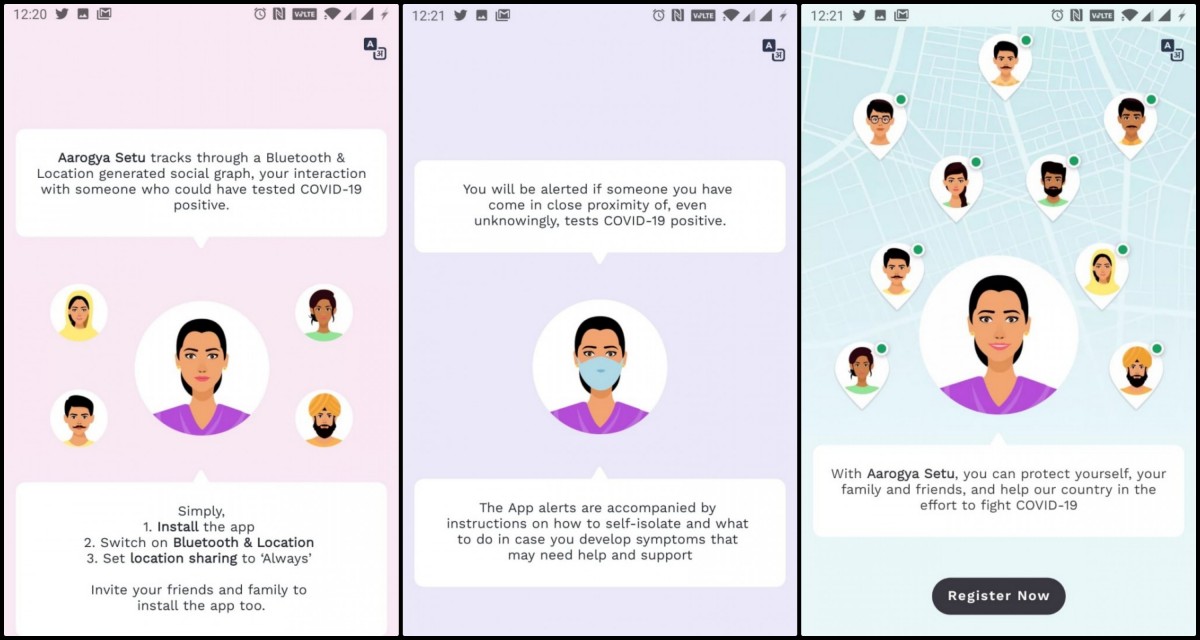 The app’s privacy policy claims that data will only be shared with the Centre and state governments and that it does not allow a user’s name or number to be disclosed to the public. It allows for personal information to be used by the government in “anonymised, aggregated datasets”

It also notes that all personal information is stored locally on the user’s device, and will be used by the Government of India (via the cloud) “in anonymised, aggregated datasets for the purpose of generating reports, heat maps and other statistical visualisations for the purpose of the management of COVID-19 in the country”. If you test positive, the data can then be shared with other people “to carry out necessary medical and administrative interventions”.

“There isn’t enough information available on what data will be collected, how long will it be stored and what uses it will be put to. If the data gets shared with the government of India, what the government can use it for needs to be specified. Otherwise, it will be a violation of the notice and consent principles,” said Prasanna S., a Delhi-based lawyer who represented petitioners in the ‘Right to Privacy’ case before the Supreme Court.

Other tech experts, like Medianama’s Nikhil Pahwa, have also pointed out that the Aarogya Setu app’s design should be outsourced, so it can be tested by the community for any privacy vulnerabilities. Pahwa notes that even countries like Singapore did this with their own government app.

Beyond this, there are also questions of how useful the app will be during a lockdown – and the inevitable time-lag that comes with a COVID-19 patient being tested positive and then an alert being sent out.

Other issues include how accurate the GPS and Bluetooth technology will be, sparking some concern as to whether it will instead be used to locate violators of the national lockdown or help in geo-fencing quarantined people, as other initiatives have sought to do.

“The problem with Aarogya Setu is the government is collecting wide information about the population instead of educating the population about health practices. Instead of a vaccine we get an app that is of no use. If apps can solve everything, why do we need a government, let’s replace them with an app,” sad Srinivas Kodali, a researcher who studies the effects of technology on society.

What does the AYUSH brochure say?

The MHRD also circulated an AYUSH ministry’s brochure, which it said was recently developed.

The brochure says that although “there is no medicine for COVID-19 as of now”, the AYUSH protocol is aimed at prevention care. It derives its care protocol from Ayurvedic concepts like “Dinacharya” i.e daily regimen and “Ritucharya” which is seasonal regimen for a healthy living.

The AYUSH ministry says that its prescriptions are based on “plant-based science” based on classical Ayurvedic scriptures to boost an individual’s immunity levels.

Some of its recommendations are as follows:

While most Ayurvedic experts will agree that such prescriptions are useful for a healthy lifestyle, it is unclear from the brochure how they will prevent an individual from contracting COVID-19 in current circumstances.