Until the new notification making Aadhaar compulsory under the government's Revised National Tuberculosis Control Programme, healthcare workers say did not even know cash benefits were available. 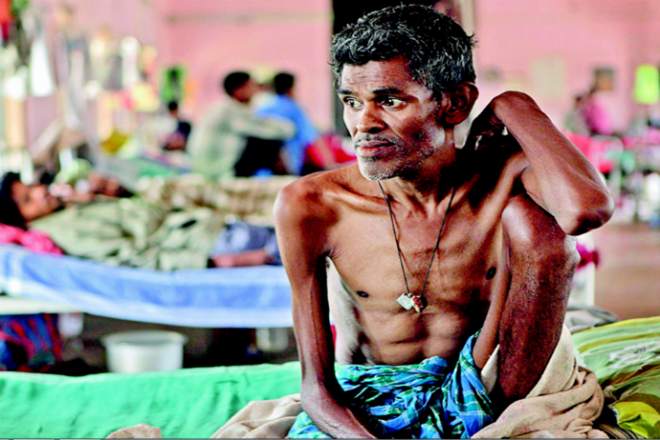 New Delhi: The Union health ministry has made Aadhaar a compulsory document for tuberculosis patients availing treatment under the government’s Revised National Tuberculosis Control Programme (RNTCP). According to the government notification, “An individual eligible to receive the benefit under the Scheme, is hereby, required to furnish proof of possession of Aadhaar number or undergo Aadhaar authentication.”

The notification says that the scheme offers conditional cash assistance as a benefit. The beneficiaries include TB patients, private healthcare providers and treatment supporters. The RNTCP says it aims to provide “universal access to tuberculosis care.”

India has 2.8 million cases of TB as of the data from 2015. This data was in fact revised by the WHO because India had been under-reporting TB. In 2015 alone, 6.1 million new TB cases were reported to the WHO as India had been reporting only 59% of TB cases until then.

However, several health workers say they were never informed of this cash assistance and TB patients have not been availing of it in the first place. They also see this order for mandatory Aadhaar cards as a way in which TB patients could be excluded and denied care.

“We work with many tuberculosis (TB) and HIV patients, including those who are multi-drug resistant TB patients. We heard about this cash scheme and Nikshay [an online monitoring system] for the first time today on our Whatsapp group,” says Ngangom Jina of the Delhi Network of Positive People.

“Those who we work with in Delhi are mostly migrants. We have tried to get them Aadhaar cards in the past but it has been very difficult. They don’t have Delhi residences, landlords don’t want to give them rent agreements and these are just a few things that disable them from getting Aadhaar cards,” she says.

The government’s notification says that the benefit of this scheme would only be given to beneficiaries who have an Aadhaar number. TB patients and their caregivers who want to avail of these benefits would need to enrol for an Aadhaar card by August 31, 2017. Until the Aadhaar is actually issued, beneficiaries will need an Aadhaar enrolment ID slip, a copy of the request made for Aadhaar enrolment or a range of other government-issued cards such as a voter identity card, PAN card, certificate of identity issued by a gazette officer, bank passbook, kisan photo passbook, ration card or “any other document as specified by the state government or union territory administration”.

A cash benefit that TB patients have not been availing

The ‘conditional cash assistance’ comes as news to many public health professionals who work with TB patients. “We have ourselves been pooling in money for several patients over the last many years. We see people struggling without money, to travel to Delhi or Guwhati, as there are only five centres in the country providing drugs for multi-drug resistant patients. Another struggle is nutritious food. People suffer the loss of employment. And through all these years, we were never informed that the government is handing out cash assistance. Now that they are, they are asking for Aadhaar cards. How are patients without even homes supposed to have Aadhaar cards?” asks one public health professional working with TB patients.

The government’s notification says the RNTCP is being administered through a web-based application called Nikshay. The health workers spoken to have been working without it. Sunil Khaparde, deputy director general for TB in the health ministry, further explains that the money itself is transferred through something called the Public Financial Management System (PFMS). The PFMS has not been mentioned in the notification, but Nikshay has.

Although ground-level workers are surprised by this announcement of both cash transfer as well as Nikshay, the health ministry says they have been distributing cash incentives under the RNTCP mainly to care providers and not to patients. Khaparde says that this is one of the two schemes of the health ministry involving direct cash transfers. The other is the Janani Suraksha Yojana for pregnant women.

Only tribal patients are given a cash amount of Rs 1000. Apart from that, Directly Observed Treatment Short-course providers are given Rs 1000 for those in Category 1, Rs 1,500 for those in Category 2 and Rs 5,000 for those working with multi-drug resistant TB patients. Doctors who notify the government of new TB cases are given Rs 100 for the notification and Rs 400 after treatment is dispensed. This money is not given to patients, but to ASHA workers, doctors, community workers and families of TB patients. These are all one-time amounts.

“The mode of giving direct benefit transfers is in keeping with the vision of the prime minister. We are proposing to give cash to all patients, but that is still being discussed and we are not finalising it yet,” said Khaparde.

RNTCP for universalisation, but Aadhar as exclusion

“Should the TB patient be running after getting Aadhaar card or should they be just taking their treatment and therapy? If the government is giving cash, that’s a very good thing. At least they can buy nutritious food. But this is useless if people can’t get the assistance without Aadhaar. If the scheme is going to be inaccessible like this, it is as if the scheme does not even exist and is a namesake,” says Jina.

Sonamati Prajapati, who works with HIV and TB patients at Sahaara in Pune, also concurs, “We were not aware of this cash scheme here. And what is the need for Aadhaar card? If government wants to give medicine or money, patients are already recorded and are taking therapy. They have their important green ART book, which proves that they are taking therapy. What is the need for an additional proof? These patients are already marginalised, living as migrants, and this will make their life harder.”

However, Khaparde says, “Ninety percent of the country is covered by Aadhaar. So obviously there is 90% coverage within the TB community as well. Nothing specially low about Aadhaar coverage in this community.  So this notification should not be a problem. For those who don’t have Aadhaar, we are going to facilitate getting it for them.”

Importantly, Khaparde says that patients will not be denied treatment on the grounds of Aadhaar. “We are not denying treatment or diagnostics to anyone under the RNTCP. Aadhaar is not compulsory for that. It is the cash benefits to the caregivers and to tribal patients which needs to be done under a direct transfer, and hence needs Aadhaar. Previously we were giving money in cash or cheque to ASHA workers and medical officers.”

The debate on Aadhaar being an instrument of exclusion reached a high point in February this year, when the government issued orders linking Aadhaar to the mid-day meal scheme and to the Integrated Child Development Scheme. The government was widely criticised for instituting measures that would put in jeopardy the meals of 140 million children who avail of the scheme. This pushed the government to clarify that other identity documents would also be usable, but the government’s initial orders from February 2017 still stand.

The RNTCP is a centrally-sponsored scheme under the National Health Mission that seeks to promote universal access to TB care through early diagnosis and regular treatment completion. Both public and private healthcare facilities participate in the programme.

The government says it is keen to link the Aadhaar to the programme because the RNTCP involves a recurring expenditure from the consolidated fund of India. The other reason cited by the government is because the use of Aadhaar “simplifies the government delivery process, brings in transparency and efficiency and enables beneficiaries to get their entitlement directly.”

Nikshay is a platform developed by the government to have better surveillance of TB cases from the public and private sector. It also helps in the monitoring of TB patients for their adherence to their drug regimen. According to an early software manual by the WHO South East Asia office, Aadhaar was optional while filling patients details. Since 2015, the government has been asking for Aadhaar details during the notification of new cases.

According to the annual status report of RNTCP from March 2017, one of the features of Nikshay is a direct benefit transfer of cash. The government said in this report that it would do this by linking Nikshay and the PFMS to Aadhaar.