2.6 Crore Live Births a Year, and Modi's Maternity Scheme Reached Less Than a Lakh Women in 2017

PM Modi announced the launch of the Pradhan Mantri Matru Vandana Yojana in December 2016, narrowing down the financial assistance of Rs 5,000 to the first birth only. 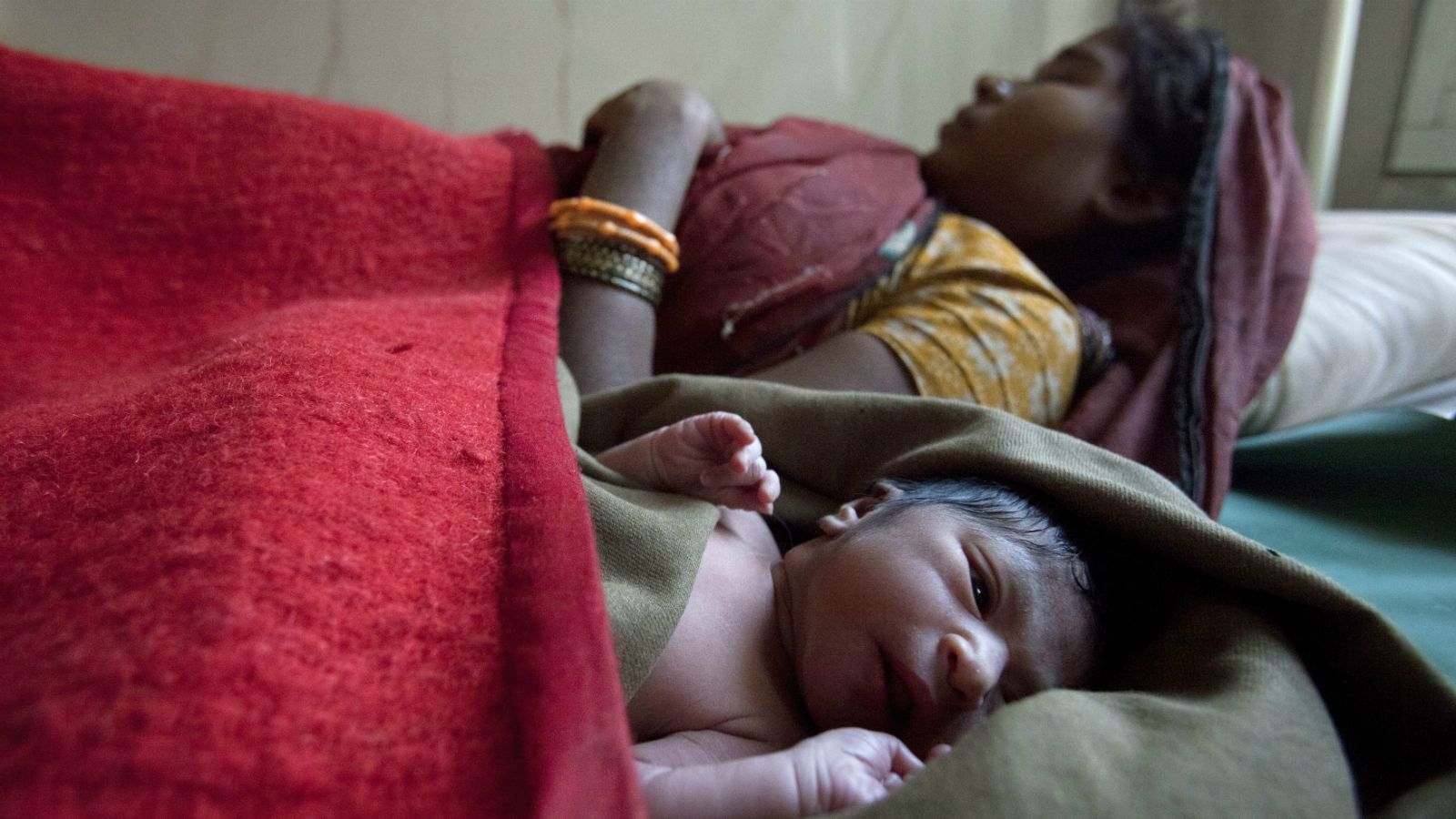 In Uttar Pradesh, where women have an average of three children, giving maternity benefits only for the delivery and care of the first child, deprives most pregnant women of their legal entitlements. Credit: Reuters

Telangana has a maternity benefit scheme which provides a cash transfer of Rs 12,000, and even a poorer state like Odisha is providing Rs 5,000 to pregnant women.

Other states had just begun to accept the principle of making financial allocations in terms of cash-based maternity benefit schemes under the Indira Gandhi Matritva Sahyog Yojana (IGMSY), which started as a pilot project in 2011 with a budget of Rs 230 crore in 53 districts by the UPA-II government.

Just when there were plans to extend the IGMSY across the country, Prime Minister Narendra Modi announced the launch of the Pradhan Mantri Matru Vandana Yojana (PMMVY) on December 31, 2016, which narrowed down the financial assistance of Rs 5,000 to the first birth only.

Since the states have yet to come up with their matching grants, the scheme continues to be stymied. The result is that the (Accredited Social Health Activist) ASHA workers in the anganwadi centres are not willing to release the forms needed to be filled out by pregnant women in order to access this money.

The dismal state of affairs can be gauged from the fact that despite the scheme being 14 months old, the Ministry of Women and Child has stated in January 2018 that around 90,000 women were able to avail of the PMMVY during 2017. This, in a country where 2.6 crore live births take place every year.

Restricting assistance to the first childbirth has created its own logjams. In Uttar Pradesh, where women have an average of three children, giving maternity benefits only for the delivery and care of the first child deprives most pregnant women of their legal entitlements, say health workers. The other point of significance which has been overlooked by the PMMVY is that in Uttar Pradesh, 258 women die during childbirth for every one lakh live births.

Providing them with  cash incentives for medical care and nutritional support at this crucial time will go a long way in saving the lives of these women.

In a large state like Uttar Pradesh, only seven out of ten have institutional deliveries and to receive the Rs 1,000 under the Janani Suraksha Yojana (JSY), the women are expected to bribe the medical staff of the hospitals before they can get the money.

Food rights activist Dipa Sinha, who is closely associated with the Right to Food Campaign, pointed out that since Uttar Pradesh has a much higher total fertility rate than states like Tamil Nadu and Kerala, there will be more women having their second, third or fourth children in Uttar Pradesh than in Tamil Nadu. Therefore, the scheme when implemented, will benefit a larger proportion of women in Tamil Nadu and Kerala who are having their first children as compared to women in Uttar Pradesh who had their first children before these benefits were announced. 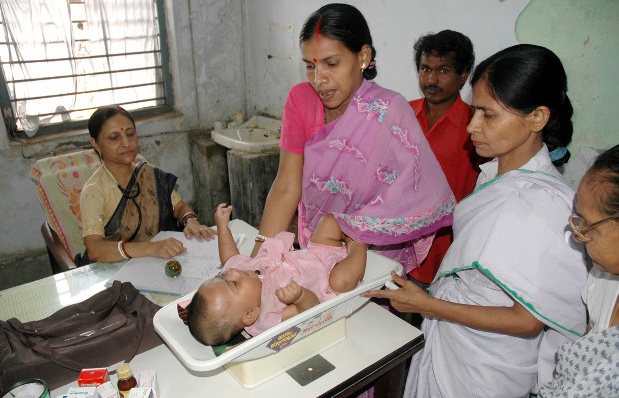 Women who begin pregnancy too thin and do not gain enough weight during pregnancy are far more likely to have babies with low birth weights. Credit: Reuters

The results on the ground are there for all to see. Recent research quoted in the Economic Survey of India 2017 pointed out that close to half the women in India are already underweight before they become pregnant, and gain an average of only seven kgs weight through pregnancy, instead of 13-18 kilos as recommended. Women who begin pregnancy too thin and do not gain enough weight during pregnancy are far more likely to have babies with low birth weights. These women suffer from persistent anaemia which in turn results in the birth of underweight children.

Sudeshna Sengupta, who works as an independent researcher for the Campaign for Universal Maternity Entitlement under the Right to Food Campaign and also with mobile creches believes, ‘this packaging and repackaging schemes has only ended up muddying the waters. Take the case of the IGMSY which was started in 2011 and has to this date benefitted 18 lakh women. Now that has been put on the shelf and we have the PMMVY which has succeeded in reaching out to less than one lakh women. Can that be described as a major achievement?’ she asked. According to data released by the Ministry of Women and Child on January 14 2018, PMMVY in 2017, reached 96,000 women.

Advocate Jayshree Satpute, co-founder of Nazdik has been filing strategic writ petitions in the Delhi high vourt on behalf of women who had filed  for the PMMVY but not received their entitlements.

Satpute emphasised how ‘In Bhimnagar in Nangloi, (Delhi)  we found that the anganwadi workers were not willing to give out forms because they had not been trained as to how to implement the PMMVY scheme,’ said Satpute.

In the government resettlement colony of Baprola in Dwarka, Satpute and her team soon realised the colony did not have an anganwadi centre despite people having lived there for over three years.

Satpute said, ‘Finally, following our repeated petitions to the Delhi state government, an ASHA worker has been appointed but there is still no anganwadi centre. When we filed RTIs with the Delhi government Public Grievance Monetary System as to why money had not been dispensed under the earlier  IGMSY, the reply each time was they had not received any budgetary allocation.’

Also read: Is the Government Planning to Dismantle the ICDS Programme?

Sinha also pointed out, “Based on the Sample Registration System report on fertility indicators, 43% of the current live births in India are first order births, thereby straight away excluding more than half the births that take place in a year (about 57%). There is no justification for this other than keeping the government’s financial obligations to a minimum,” said Sinha.

Sinha cites the findings of the National Health Family Survey of 2017 which has found that a lower income families are spending Rs 3,500 on hospital expenses whereas money is also required to provide better quality food for the mother.

“So for the majority of families, the birth of a child becomes like another emergency,” said Sinha.

How is this lack of funding translated on the ground amongst lakhs of pregnant women in the final stages of their pregnancy? Mothers and pregnant women speak out forcefully at how they continue to be excluded from these benefits.

Take the case of 24-year-old Rajni who lives in Bawana. Rajni said, “I was forced to stop working at a construction site in  Saraswati Vihar when I became pregnant.” She possesses a workers ID card from the Delhi Labour Welfare Board but Rajni says, “I have received no maternity benefits despite making several follow visits to the labour office to get IGMSY benefits.”

Another construction worked, Ruby who lives in Bawana applied for an ID card under the Construction Workers’ Act. Despite an ID card, she has not been able to avail of any maternity benefits.  “I cannot work anymore since I have to take care of my two children. My husband is also a construction worker and we are dependent entirely on what he earns. His work conditions are erratic and this has hit the family finances hard,” said Ruby.

Worse was to follow. “My husband and I are not literate. As a result we are being pushed around all the time. When I visited the labour office some months ago to track what had happened to my maternity entitlements under the PMMSY, I found my application file had disappeared.”

Food activist Koninika Ray said, “This is the case with the large majority of women and what is most shocking is that the  labour department is sitting on a kitty of  Rs 17,000 crore for labour entitlements.”

Ray believes the need of the hour is having a universal, unconditional maternity entitlement equivalent to six months wages at no less than the prevailing minimum wages which works out to Rs 18,000 crore annually.

The Right to Food Campaign is also demanding greater parity between the entitlements of the women in the formal and non-formal sectors.

Jasodhra Sengupta of Sahayog insists, “There has to be some parity between the entitlements being given to women working in the formal sector and those in the non-formal sector but that is not the case. For more than four years, women in the non-formal sector were entitled by law to a maternity benefit of at least Rs 6000, guaranteed under the NFSA. The Modi government simply amended the law to make it even more exclusionary,” said Sengupta.

Sengupta cited the National Family Health Survey report for 2015-16 which shows that India’s infant mortality rate is 41 deaths per 1,000 live births. One in 20 Indian children die before their fifth birthday, while 38% of children under five are stunted, a sign of chronic undernutrition.

“World Health Organisation statistics show that 174 out of 100,000 Indian women die in childbirth, compared with 23 and 44 out of 100,000 in countries like China and Brazil. Poor nutrition of pregnant women, lactating mothers, and children under age two are the main causes of these deaths,” she said.

Although India is counted among the top ten in the global economy, the recent Global Hunger Index (GHI) 2017 report classifies the situation of hunger in India as ‘serious’ and ranks it very close to the bottom among 119 countries. The National Family Health data published in 2017 also echoes these findings by showing that the percentage of stunted and under-weight children under five years of age has changed very little in India in the last ten years. A recent Lancet study further confirms an increase of deaths among babies caused by low birth rate.

It is, therefore, not surprising that half the women aged 15-49 years are anaemic, and shockingly, this situation has remained stagnant over the last decade. This has happened despite the implementation of the different supplementary nutrition schemes. Clearly, these measures have not proved adequate to improve the nutritional profile of our country.

Vandana Prasad who has been working in the field of public health for several decades is horrified that while the recent budget reduced the allocation of the National Health Mission, the government is talking about big- ticket health reforms.

The discourse is not about human development but about the social sector being seen as a business opportunity, it is not about providing services to the poor but about increasing health service consumption whereby poor people will go to the private sector for treatment,’ said Dr Prasad.

All in all, these activists insist that maternity entitlements are a critical tool to fight malnutrition and infant and maternal mortality. A maternity entitlement recognises and validates women’s work, acknowledging women’s need for rest and replacement and some financial compensation during pregnancy and the crucial post-pregnancy period. This is something that Modi government needed to heed.