Women Take the Lead in Building Toilets in Rural Bihar

Women's self-help groups in the villages of Jehanabad are encouraging people to build toilets in their homes and end open defecation. 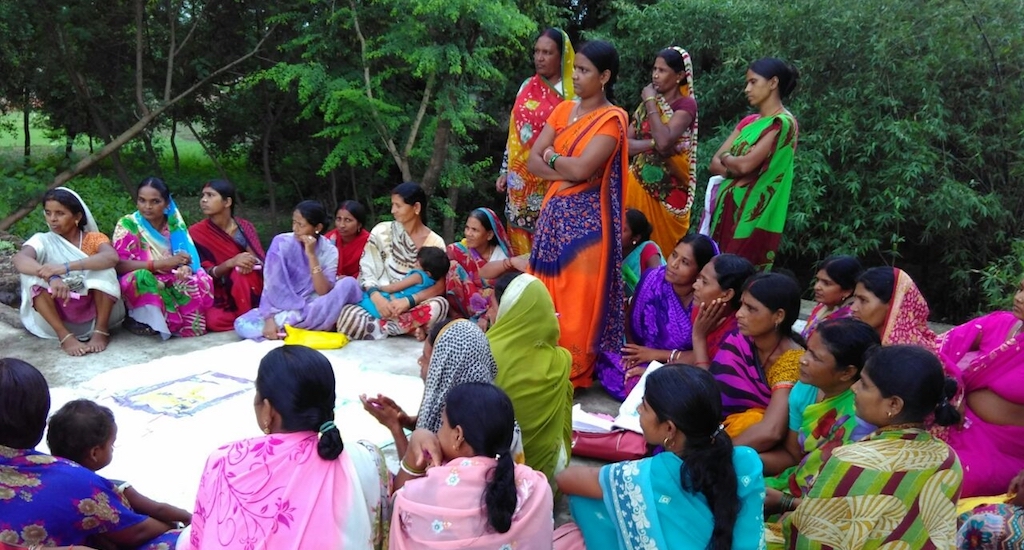 Jehanabad district, Bihar: Poonam Devi and Nageena Devi are happy and proud women today. They have every reason to be. Leading from the front, they have succeeded in their mission to ensure that nobody in their village defecates in the open. They achieved this by building toilets in their homes and motivating others to follow suit.

Poonam, in her mid 40s, is the head of Ujwal Gram Sanghatan, a women’s self-help group (SHG) in Kalanaur village. She is one of the thousands of jeevika didis (livelihood sisters). Nageena, who heads the Tulsi Samuh SHG of Dharnai village in Makhdumpur block of Jehanabad district, is also a jeevika didi. They are called this since their SHGs have been formed under Jeevika, the Bihar government’s rural livelihood programme.

The jeevika didis have been motivating rural women to construct toilets and to use them for self-dignity and better hygiene.

“When I decided to construct a toilet in my house by taking loan from my SHG, none but my husband opposed it. He felt that there was no need for a toilet since we live in a mud house. I finally convinced him and constructed it,” Poonam told VillageSquare.in.

Similarly, Nageena was also the first in her village to come forward to construct a toilet in her house by taking a loan from her SHG. “Who would think of constructing a toilet, especially with borrowed money. But I made it happen,” said Nageena.

Impressed by their conviction, the Barabar Saway Siddha Mahila Vikas Sawalambi Sahkari Samiti Limited Federation (BSSMVSS), a voluntary organisation in Makhdumpur, asked Poonam and Nageena to lead a team of jeevika didis in their campaign to build toilets. “After building a toilet in my house, I worked with a team of women and successfully motivated and helped others to construct toilets,” said Nageena.

“There are hundreds of jeevika didis like Poonam and Nageena who constructed a toilet with a loan from their SHGs and then joined us to motivate other women to do the same,” Sunil Kumar, BSSMVSS’s field officer, told VillageSquare.in.

“In several villages across Bihar, toilets constructed through government programmes are used as a godown or a dumping site, since most of them are not operational,” said Indu Devi, president of BSSMVSS. The men were unconcerned.

Asha Devi, a jeevika didi from Kalanaur, said, “It was a difficult task to convince men to construct a toilet. The men claimed that one should relieve oneself outside and there was no need to construct a toilet, especially on borrowed money.” Sometimes the men damaged the toilets under construction to vent their anger.

But the collective power of women finally convinced the men. “Jeevika didis have made a big difference by persistently persuading women to take ownership of the toilets they construct and to use them,” added Indu.

Kanti Devi and Reena Devi of Dharnai agree that they built toilets after learning from the didis that open defecation can lead to ill health and diseases. Jehanabad’s jeevika district project manager Manish Kumar said that women and girls are no longer found to go to the fields to relieve themselves. 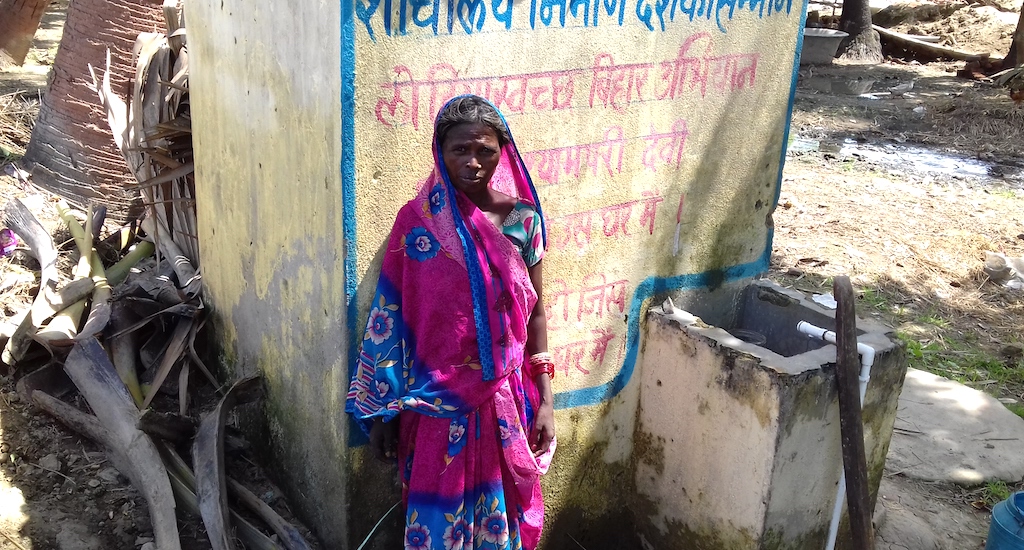 A village woman is standing in front of a newly constructed toilet at her home. Credit: Mohd Imran Khan

Community meetings were held at night to discuss the ill effects of open defecation. Some tough measures have also been taken to bring about a change in the behavioural pattern of villagers. Nigrani samitis or vigilance committees comprising women from SHGs keep watch to identify violators.

Lota jalao is also practiced, where the plastic bottles in which water is carried to the field are snatched and burnt.

“Lack of money was a deterrent to persuade women to build toilets. So loans were arranged through their SHGs. Basically, the money is their own savings that they had deposited with their SHG,” Indu told VillageSquare.in.

Nearly 1,000 SHGs with about 14,000 women members from different villages are operating in 22 panchayats in Makhdumpur block, a stronghold of Maoist insurgents till about a decade ago.

In Kalanaur, there were hardly 25 toilets and most of them were in the houses of landed ‘upper’ caste people. Thanks to jeevika didis’ efforts, the mahadalits have also built toilets.

The Jeevika programme was launched by the state government with the assistance of the World Bank in 2006. Jeevika promotes rural livelihoods and enhances social and economic empowerment of the poor, particularly women.

Thanks to the innovative door-to-door campaign involving women, over 100,000 toilets have been built, covering hundreds of villages in 21 districts in the last two years.

As the role of jeevika didis has been successful in Kalanaur and Dharnai, the same strategy will be implemented in Sugaon and Sumera panchayats next and then across the entire state.

Bihar rural development minister Shrawan Kumar said that 5,80,000 SHGs have been set up under the Jeevika scheme and the government plans to increase them to one million by 2018-19. Each SHG has at least a dozen women members who are creating awareness about the connection between sanitation, hygiene and health.

“Till date 18 blocks, 717 gram panchayats and 4,000 villages have been declared open defecation free. Eighteen lakh toilets have been constructed in the state but there is a long to go as nearly 1.5 crore toilets need to be constructed in the state,” Shrawan Kumar said. But he hoped that the jeevika didis would help the state go open defecation free by 2019.

“Jeevika didis have been playing an important role in creating awareness about the need for toilets and in motivating women to construct toilets,” Balamurugan Devaraj IAS, CEO-cum-state mission director of Jeevika program told VillageSquare.in. “Their role in social mobilisation and behavioural change will help us achieve a open defecation free Bihar.”

The article was originally published on VillageSquare.in.