In a Facebook post, that has now been deleted, a member of the Barala family shared a photo of DJ Varnika Kundu with two men and implied that she was drunk at the time of the incident. 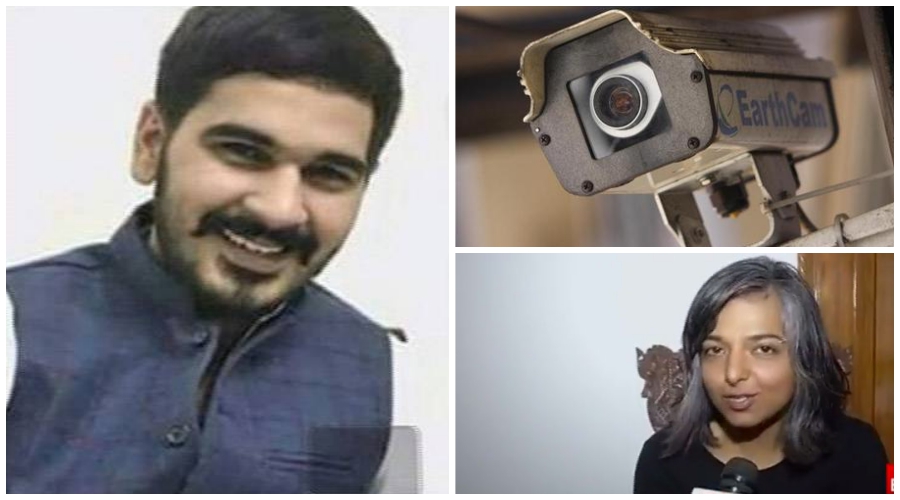 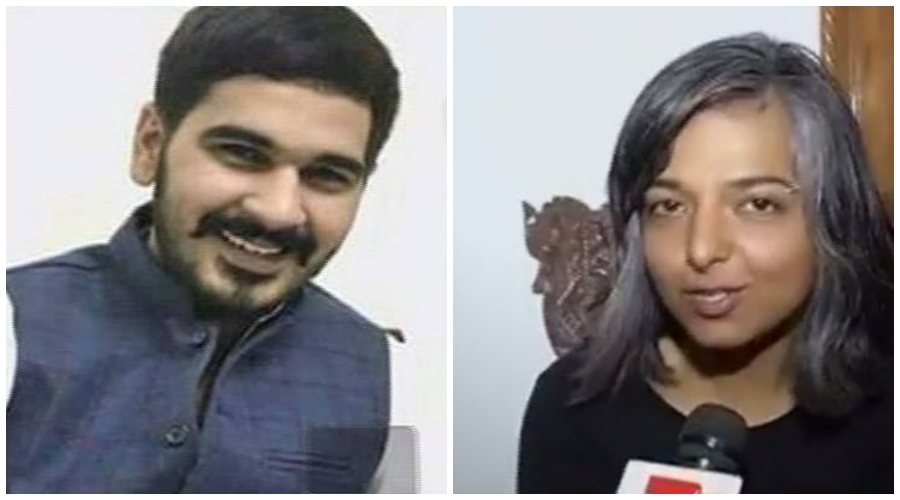 New Delhi: A day after a senior BJP politician’s son and his friend were arrested and later released on bail for ‘stalking’ DJ Varnika Kundu in Chandigarh at midnight – in fact, the crime she accused them of was attempted kidnapping but the police watered down the charges – BJP leaders and members of the politician’s family  are resorting to victim shaming on social media.

In her complaint, Kundu  accused Vikas Barala, son of Haryana BJP chief Subhash Barala, and his friend Ashish Kumar of chasing her through the streets of the city with the intention of kidnapping her.

On Monday, Ramveer Bhatti, vice president of the BJP In Haryana, blamed the young woman for “staying out so late in the night”. Shaina NC, a prominent official spokesperson of the BJP, also took to Twitter to attack Kundu, posting an old image of her with two boys – one of whom she misidentifies as Vikas Barala – and referring to her as “so called victim beti”: 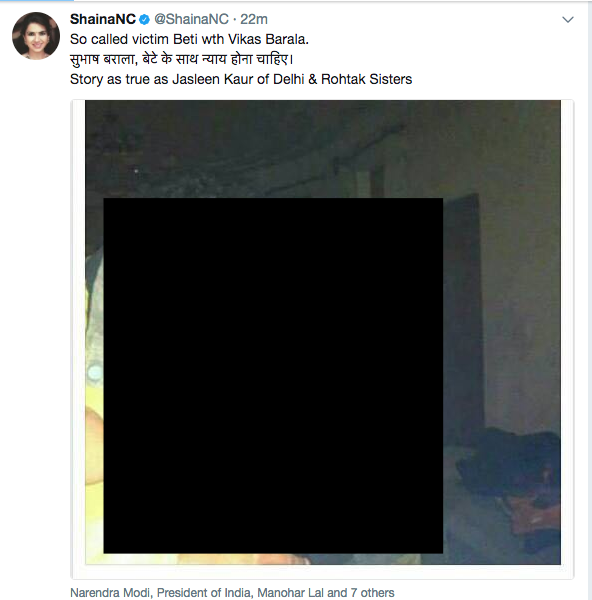 Shaina also tagged Prime Minister Narendra Modi,  President Ram Nath Kovind, Haryana chief minister Manohar Lal Khattar and seven others. Tagging is a way of drawing the attention of the tagged person to a tweet. She has since deleted the offending tweet and claimed some “mischievous folks” had briefly “hacked” her account.

In a Facebook post, that has now been deleted, a member of the Barala family, Kuldeep Barala – who also describes himself as having “worked at Bharatiya Janata party” –  shared a photo of the victim with two men and implied that she was drunk at the time of the incident. 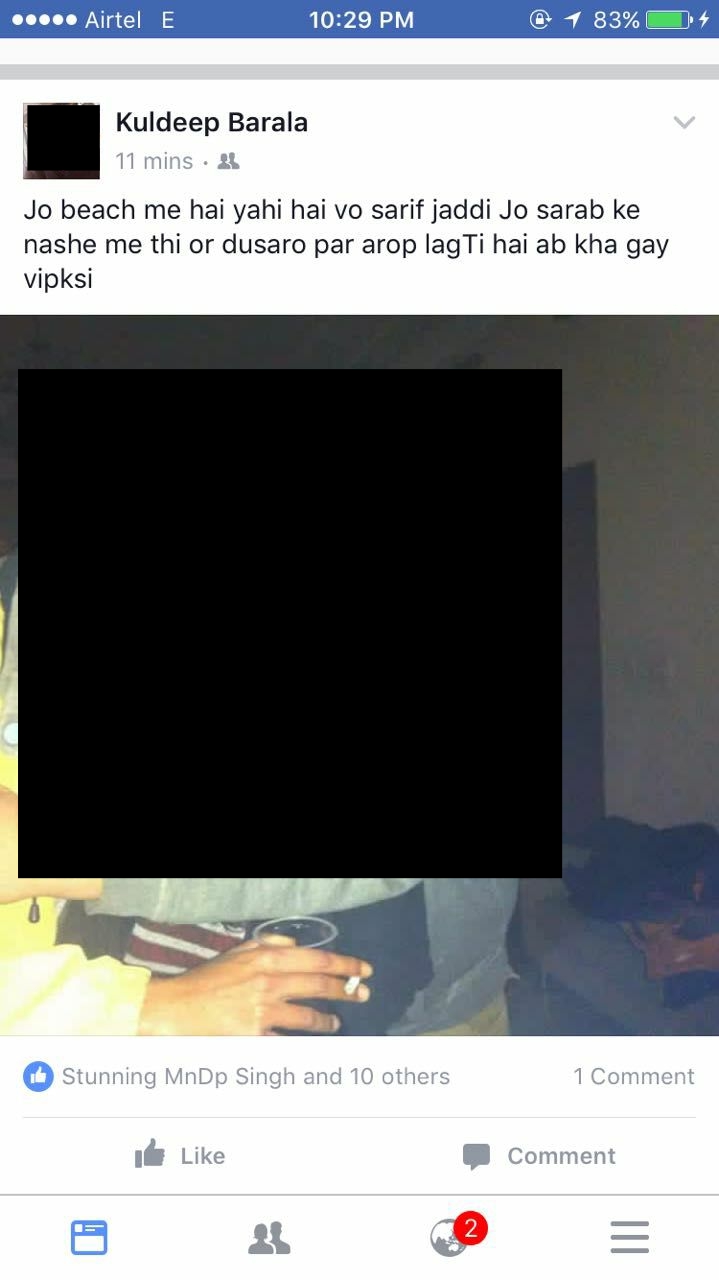 In another post, the man shared an old photograph of Kundu with glasses of alcohol in the foreground, again trying to raise questions about her character, and claimed that the incident was being blown our of proportion by the Opposition to malign the BJP leader’s image. The images were lifted from her Facebook page.

Curiously, Kuldeep Barala also slammed the police for speaking to the media about the incident – he used the word ‘leak’ – and said this meant that the police would not be willing to go back on its word of slapping serious charges on the goons. In fact, the police has gone back on its word, with the same officer, DSP Satish Kumar first telling reporters that non-bailable charges had been filed and then later saying that those charges were not found suitable to the crime. 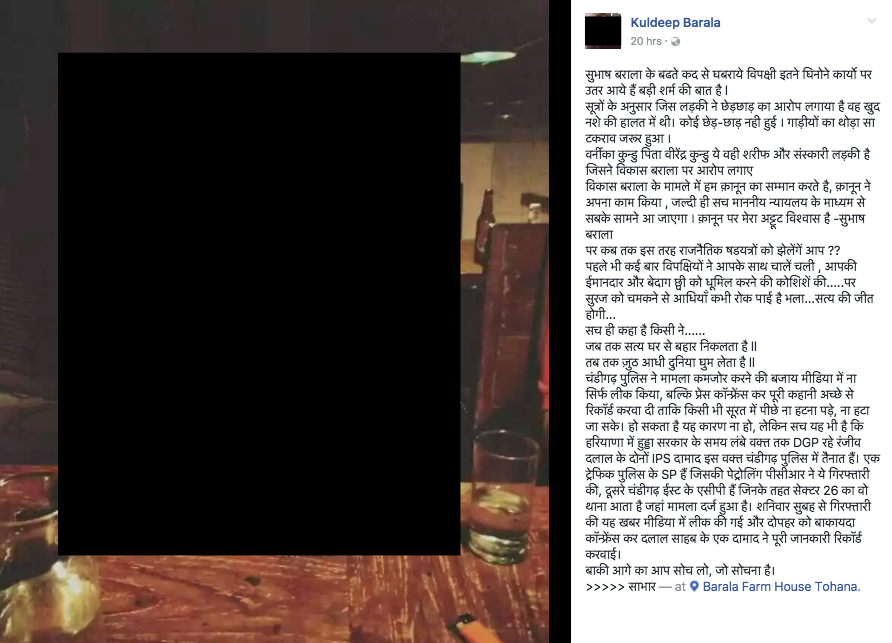 “As would be expected, the goons are from influential families. We all know most such cases of harassment go unpunished and even unreported. Most people would not want or dare to take on goons from influential families. I feel if people with some privileges like us cannot stand up to such criminals, nobody in India can,” wrote Varnika’s father, Virender Kundu, an Indian Administrative Service (IAS) officer in Haryana, in a Facebook post explaining her ordeal.

Initially, the men were arrested and charged under Indian Penal Code (IPC) Section 354 D (stalking) and Section 185 of the Motor Vehicle Act (driving by a drunken person or by a person under the influence of drugs) as well as the more serious Sections 341 (wrongful restraint), 365 (kidnapping) and 511 (attempt to commit offences punishable with imprisonment).

Also read: ‘Someone Has to Stand Up to Goons From Influential Families. We Are Standing. So Long as We Can’

However, the charges were later reduced and the two men were released on bail. After facing a backlash for their U-turn, the police said that they were seeking legal opinion regarding the dropped sections.

And this is what DSP Satish Kumar had said a few hours before the second pc. Spot the differences. pic.twitter.com/e4Ny0rTBkj

Under attack from Opposition and ally Shiv Sena, the Haryana chief minister on Sunday said that Subhash Barala can’t be punished for the actions of his son.

“I came to know about this incident. Chandigarh Police has filed the complaint and I believe they will take appropriate action. This matter is not related with Subhash Barala but with an individual. So action would be taken against his son,” CM Manohar Lal Khattar told media.

“On one hand, the Bharatiya Janata Party boasts about its various schemes for women and giving them honour, and on the other hand we have a BJP leader whose son is stalking a woman. It is very embarrassing,” Shiv Sena leader Manish Kayande told ANI. Congress leader M. Afzal also demanded Barala’s resignation on moral grounds.

One indication of the clout of the Barala family is the masthead image of the BJP Haryana’s Facebook page where the patriarch, Subhash Barala occupies pride of place along with Prime Minister Narendra Modi, BJP president Amit Shah and Haryana chief minister Manohar Lal Khattar.

A bureaucrat in Chandigarh told The Wire the fact that the father has had to take recourse to social media to seek support is itself an indication of the uphill battle he knows his daughter is likely to face in her quest for justice.

Speaking to the Times of India, senior Haryana IAS officer Ashok Khemka said, “The girl has handled a nightmarish situation very bravely. To deter such occurrences in the future, the criminal justice process must be fast-tracked. The brave father should not be victimised for the support to his brave daughter. The political party must demonstrate determination in Beti Bachao through real action.”

The speed with which the Barala family has taken to attacking the young woman on social media coupled with the failure of the IAS association in the state or the chief secretary or any other top bureaucrat to rally around their colleague and his daughter are early warning signs that the usual playbook is already underway, say lawyers familiar with cases of crimes committed by influential persons.

Chandigarh police on Monday said there was no CCTV footage available of the incident. DSP Satish Kumar told the media that they tried to get CCTV footage from nine cameras along the route the woman was chased, from Sector 7 to Housing Board traffic light point in Chandigarh, but all were found to be “non-functional”.

“It is strange that the CCTV cameras of such high-profile areas were not working. This seems to be a cover-up,” a junior police officer told IANS.

(With inputs from IANS)