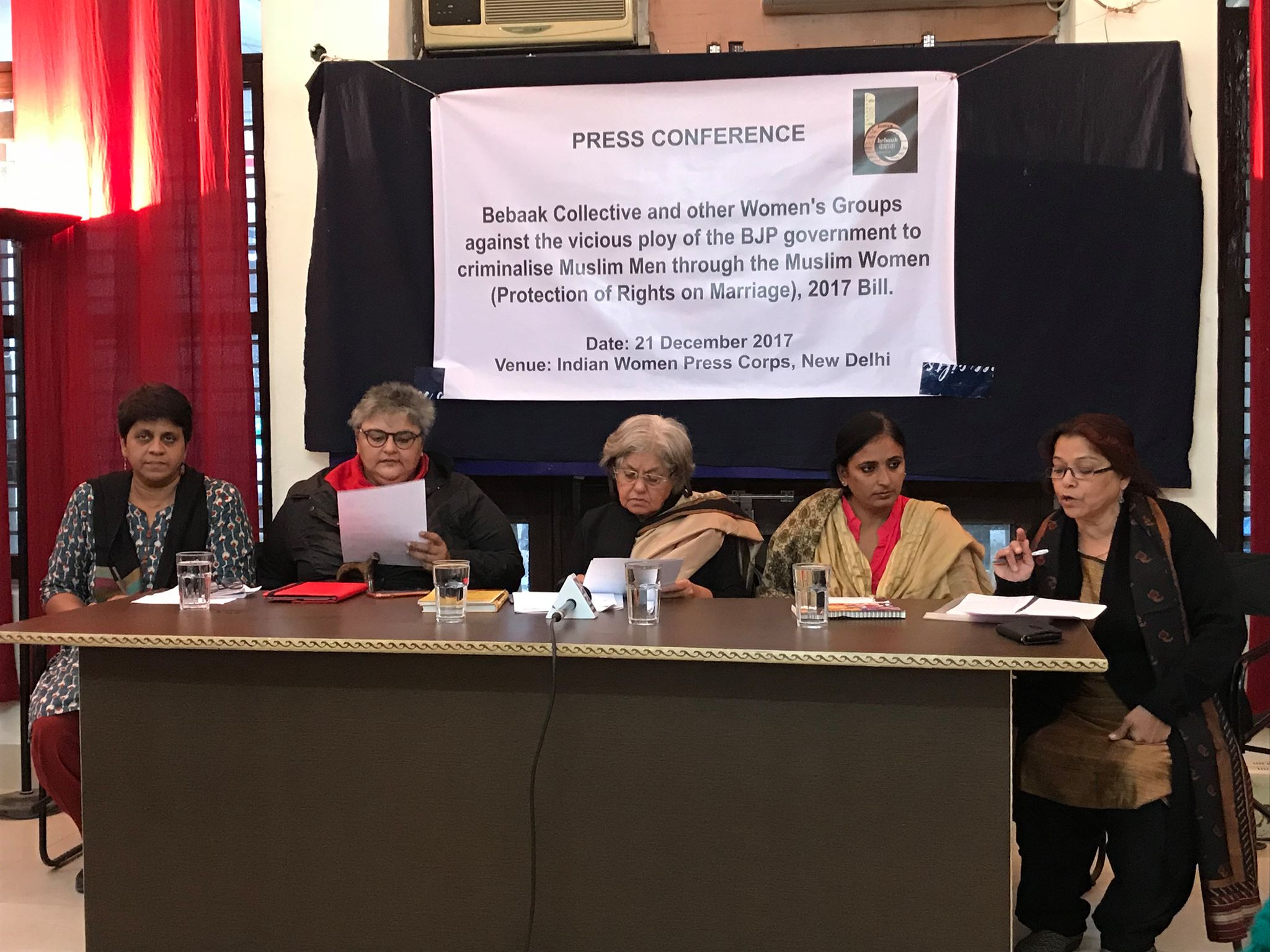 New Delhi: It is a matter of grave concern that the Bill on the criminalisation of instant triple talaq was cleared by the cabinet without inviting the opinion of women’s rights groups or consulting with other civil society stakeholders, said activists and lawyers alike at a press conference organised by Bebaak Collective (an intervener in the Supreme Court case supporting Shayara Bano’s petition) in the capital on Thursday (December 21).

The activists questioned the government’s argument that the Bill would safeguard women’s rights. The primary reason for their apprehension, they said, is that the Bill failed to address Muslim women’s issues on a wide scale – such as Muslim women’s rights in family and marriage, practices of nikah-halala and polygamy. The activists described the Bill as a piecemeal legislation – a tool to “criminalise Muslim men”.

The government-sponsored draft legislation that has run into controversy proposes to make instant triple talaq or talaq-e-biddat in “oral, written, electronic or any other form” a cognisable or non-bailable offence punishable with three years jail and a monetary fine.

Arguing that there is no rationale to criminalise the practice of talaq-e-biddat, Hasina Khan from Bebaak Collective asked, “Personal law is civil law, therefore, how can you criminalise civil law?”

The organisers argued that such an important legislation should not be passed in haste. Meaningful consultations with a range of stakeholders, especially women’s groups, should precede the passing of the law, they said.

Shabina Mumtaz, a social worker from Uttar Pradesh who has worked with Muslim women at the grassroots level, talked about the reactions of women she had interacted with in her discussions about the law. Mumtaz said that mostly the women did not understand how sending their husbands to jail would solve their problem. According to Mumtaz, what the women told her was, “When our husbands would divorce us, we would have to leave home and face social, mental and financial exploitation. In case the government passes the law and my husband violates it, he shall be sent to jail – this is no solution. We want our redressal within the confines of our marriage.”

When asked about how the proposed law could change their lives, Mumtaz said, “Women now can come forward and report that their husbands have given them triple talaq. But the proposed law, if passed, is likely to create fear in the mind of the wife that her husband will be sent to jail if she makes a complaint.”

Senior advocate Indira Jaising, who represented Bebaak Collective in the Supreme Court in the instant triple talaq case, questioned the ambiguity in the law on the subsistence allowance sanctioned for a Muslim woman and her dependent children. “The moment the magistrate declares the divorce null and void, the woman has the status of a wife and in her capacity as a wife she is entitled to unrestricted access to the resources of the family, she’s entitled to her matrimonial home, she’s entitled to much more than a ‘subsistence allowance’,” said Jaising.

Elaborating on the legal irregularities in the draft, Jaising asked, “Where is the question of custody if a divorce is declared null and void? If there is no divorce, the question of either party having custody of the children simply doesn’t arise.”

Ayesha Kidwai, professor of linguistics at Jawaharlal Nehru University, expressed her discontent that the Bill is being placed in parliament without being circulated among standing committee members. Kidwai said that it was surprising that a Bill dealing with women’s rights has not been discussed with women’s groups. According to her, the Bill is “Intended to fuel a culture of fear, of the state being able to enter your home and be able to incarcerate Muslim men”.

“We have given our memorandum to a Muslim forum of MPs that we do not at all support criminalisation and it is our demand that the Bill be forwarded to a standing committee,” said Khan, the founder of Bebaak Collective. “The Bill is likely to take Muslim society backwards, since it goes against the struggles of women who have crossed community barriers to express their distress. Among other things, the Bill also threatens to jeopardise the conversation around polygamy, unilateral talaq, unequal inheritance rights and other anxieties faced by Muslim women.”

Shreya Valiramani is a final year student at Jindal Global Law School, Sonepat, Haryana, and an intern with The Wire.