The Gender Beat: Most Harassment of Transgender People is by Police; Kolkata Student Assaulted by Moral Police 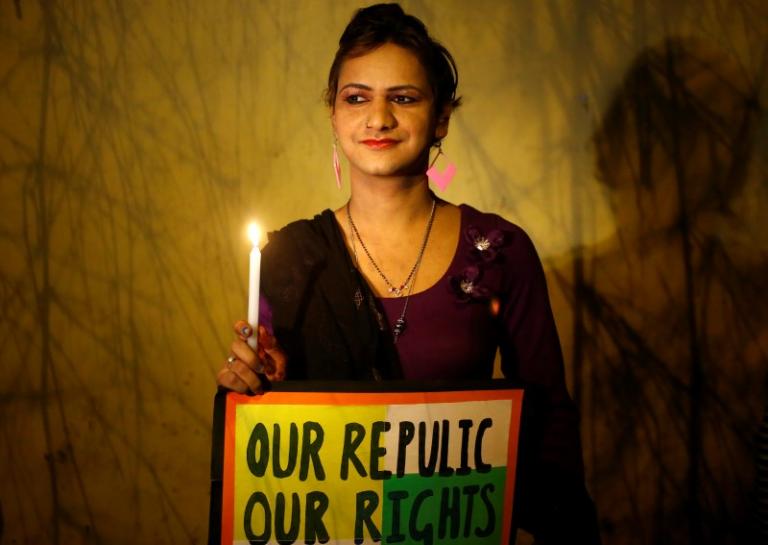 An LGBTQ rights activist holds a placard and a candle during a candlelight protest in New Delhi January 28, 2014. Credit: Reuters/Anindito Mukherjee/Files

Study: Police the biggest perpetrators of violence against transgender people

A study by the National Institute of Epidemiology conducted with 60,000 transgender participants across 17 states found that the greatest perpetrators of violence against transgender people are the police and law-enforcement officials, according to a report in the Times of India.

It also found that most transgender people receive no support from their biological families.

It is unclear from the report whether the study only looked at transwomen, or a broader spectrum of people who don’t conform to the gender identity assigned to them at birth. This is a conflation that transgender activists have spoken out against, arguing that it erases many different kinds of gender expression and identities.

What is clear is that transgender people are at the receiving end of tremendous levels of violence, and most often by the very people who are employed to prevent violence.

A 22-year-old college student in Kolkata has said that she was abused and assaulted by a group of men who had a problem with the fact that she was wearing shorts and smoking.

The young woman told NDTV, “They told us you cannot wear these clothes and roam around and smoke here. They said you are ruining our culture. ‘Stub out your cigarette immediately and never show your face here if you want to live’. You can do this in Mumbai or Delhi but not in Kolkata.”

Rather than being supported by them, the young woman was harassed by police officers that night. She accuses them of forcing her to rewrite her statement several times and asking her repeatedly if she really wanted to file it. Police officers reportedly called her at 2.30 am and turned up at her house an hour later, asking for proof and a medical report.

Nobody has been arrested so far, and although locals identified the men as being associated with the ruling Trinamool Congress Party, the police are denying this connection.

Meanwhile, two of the accused – identified as Shouvik Ganguly and his father Kamal Ganguly – defended their actions, and said that they were off on a family holiday. They told the Telegraph that they had not been contacted by the police. A bystander who intervened on behalf of the young woman said that a Trinamool leader had called him on the phone and asked him why he had done so.

Counsel for the school student in Handwara who was allegedly sexually harassed says that neither of the statements she has given are voluntary. She and her family are being represented by the legal team of the group Jammu Kashmir Coalition of Civil Society (JKCCS).

The JKCCS says it has approached Chief Minister Mehbooba Mufti, and several senior administrators and police officers, but has received no response so far.

The State Women’s Commission has said that the girl should be shifted out of police custody, to a safe place.

Meanwhile, a young local man has been arrested on the basis of the statements that are being contested by the girl’s counsel and family.

Three security force bunkers have been removed from the main market of Handwara town by municipal authorities.

Dipa Karmakar, who is from Tripura, is the first Indian woman gymnast to qualify for the Olympics. She will be representing India in artistic gymnastics at the 2016 Rio de Janeiro games.

Karmakar is only one of five gymnasts to have successfully completed a notoriously difficult vault called the Produnova. She has won 77 medals, including 67 gold medals since 2007.

She is the first Indian gymnast to have qualified for the Olympics in over fifty years.

Patidars forbid women from marrying outside the community

Patidars, who are seeking reservations for themselves in education and employment, have forbidden the women in the community to marry outside of it, according to reports.

“Community leaders of three districts, including Mehsana, have submitted memorandums to collectorates – demanding that a marriage certificate be considered valid only if it bears the signature of the woman’s parents,” Dr. Nachiket Mukhi, secretary of the Sardar Patel Group told the Hindustan Times.

Commentators have argued that the Patels should not qualify for affirmative action, since they are not historically oppressed, in the way that communities belonging to scheduled castes and scheduled tribes are.