Sushma Swaraj Is the Latest Victim of Right-Wing Trolling

Swaraj experienced what women on Twitter have to deal with on a daily basis – death and rape threats, threatening messages which are often sexual in nature. 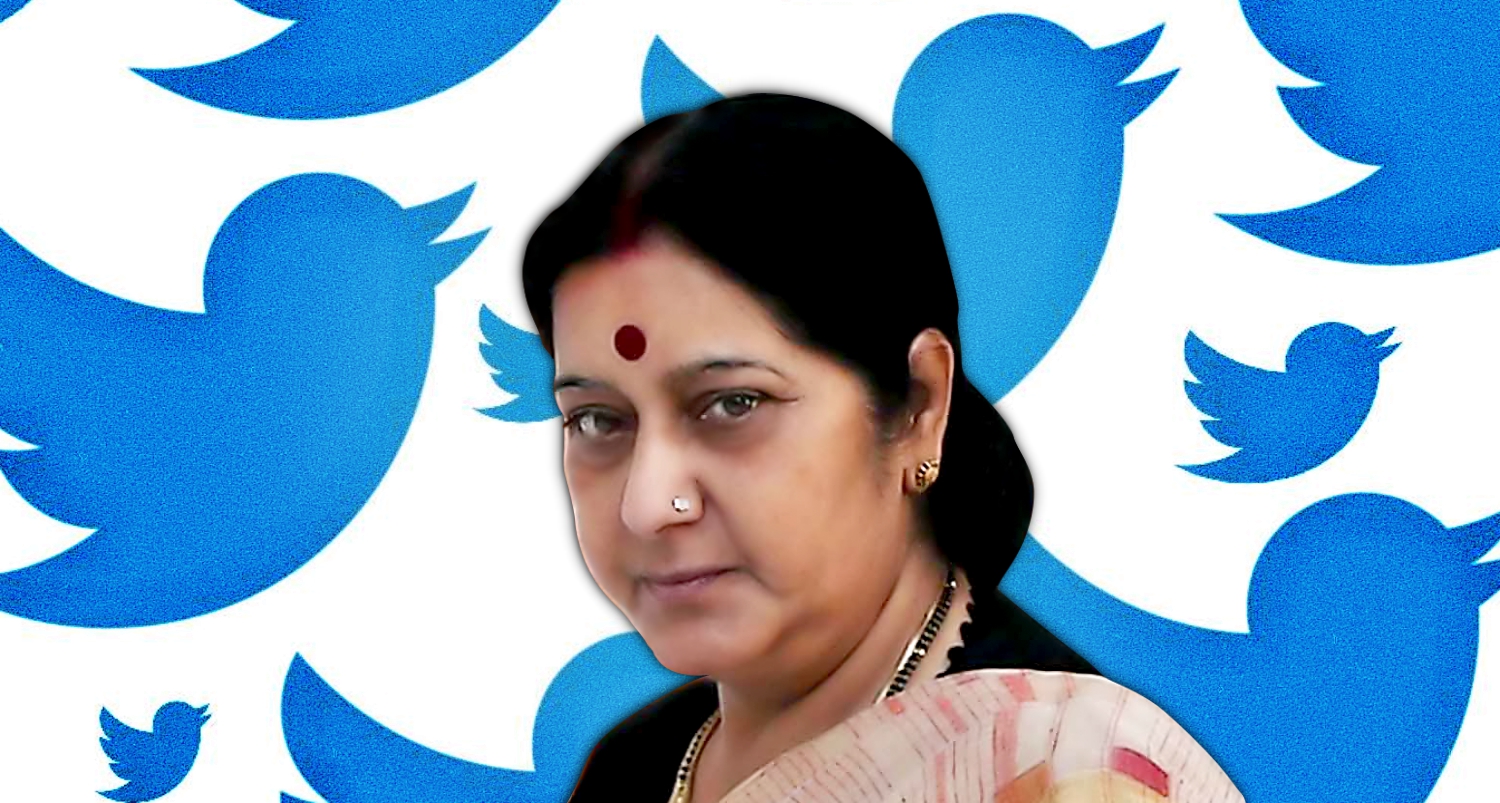 New Delhi: Sushma Swaraj, one of the Modi government’s most loved ministers, found herself on the receiving end of the troll firing quad on social media after she pulled up a passport office employee for harassing an inter-faith couple.

In a series of tweets to external affairs minister Sushma Swaraj last week, Noida resident Tanvi Seth had complained that one of the officials who interviewed her at the Regional Passport Office in Lucknow did not approve her application and verbally lashed out at her for marrying a Muslim and not changing her name. Her husband said that the ministry of external affairs (MEA) employee also asked him to convert for their marriage to be ‘accepted’.

A day later, the MEA handed over their passports and promised “appropriate action” against the employee concerned.

A day after Tanvi spoke to the media, the passport officer, identified as Vikas Mishra, held a press conference to share his side of the story. “I asked Tanvi Seth to get the name ‘Shadia Anas’ endorsed as it was mentioned on her nikahnama [Muslim marriage contract], but she refused. We have to do thorough checks to ensure no person is changing their name to obtain a [false or duplicate] passport,” he told Asian News International (ANI).

The passport officer’s statement angered the right wing Twitterati who felt that the minister had acted impulsively in an attempt to “appease minorities”.

In fact, under current passport rules, there is no scope for an official to refer to a woman’s marriage certificate as proof of name. Trolls accusing her of “pretending to be secular” went as far as attacking her for her kidney transplant. The minister underwent a transplant surgery at the All India Institute of Medical Sciences in Delhi last year.

Swaraj, who returned to India after a week-long trip abroad, called out the abusive handles by ‘liking’ their tweets.

She even retweeted some of the abusive tweets to highlight the level of vitriol directed at her. 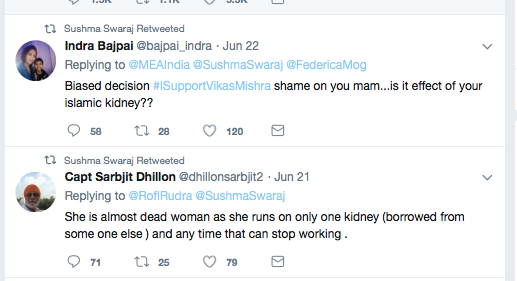 This isn’t the first time a BJP leader had to face the right-wing’s wrath on Twitter. In July 2017, Union home minister Rajnath Singh got trolled by ‘nationalists’ on Twitter after he responded to a tweet by Shuchi Singh Kalra asking the government to “drag those (Kashmiris) cowards out and cull them“.

“Who gives a **** about the spirit of Kashmiriyat at this moment? It’s not your job to placate. Just drag those cowards out and cull them,” Kalra had tweeted. Left: Tweets by right-wing influencers about Swaraj; Right and below: Tweets by same people about Rajnath

Interestingly, the people, most of them vocal supporters of Modi, who slammed Singh for “attacking” a woman are yet to condemn those hurling sexist abuse at Swaraj. 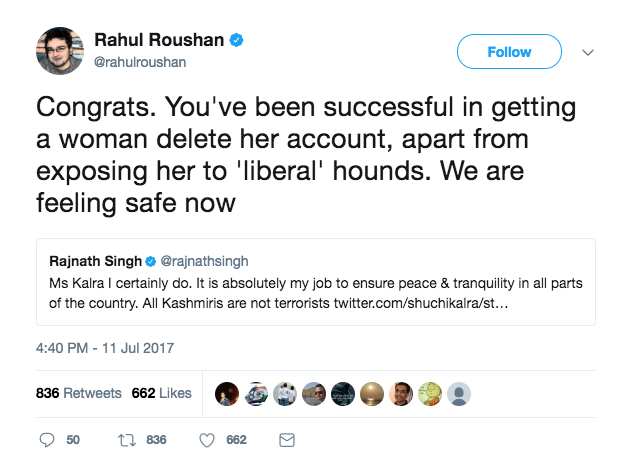 While Rajnath faced flak for “exposing a woman to trolls”, many asked for his resignation and claimed he wasn’t up for the job. The attacks on Swaraj are of a different kind; the trolls have turned on her personally and invoked her illness in a communal tone.

Swaraj experienced what women on Twitter have to deal with on a daily basis – death and rape threats, threatening messages which are often sexual in nature. While the minister subtly called out her trolls, sadly, she has so far remained silent on coordinated attacks carried out against women journalists and activists on social media by the IT cell of her own party or when her colleague labeled journalists ‘presstitute’. 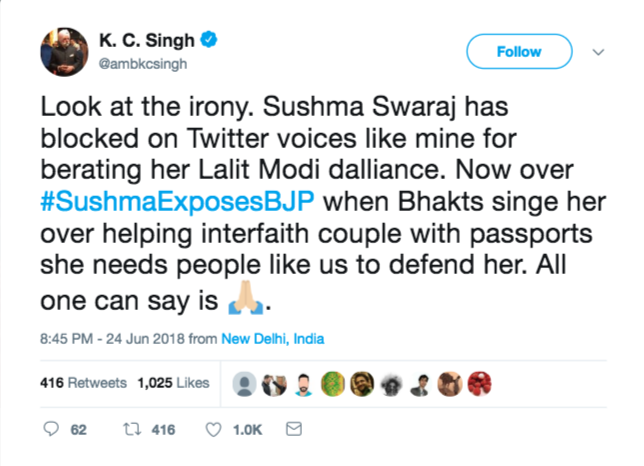 As of now, not even a single senior BJP leader has tweeted out in support of Swaraj. Meanwhile, Congress issued a statement on Twitter condemning the trolls. 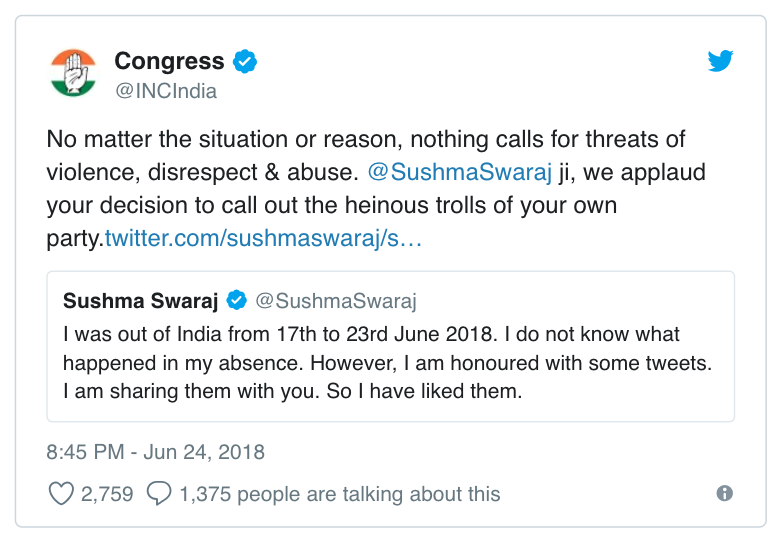 On June 21, United Nations high commissioner for human rights Zeid Ra’ad Al Hussein took part in a discussion at the council on the impact of violence against women human rights defenders and women’s organisations in digital spaces. He said that online harassment, such as “death threats, threats of sexual and gender-based violence, and online defamation and disinformation campaigns – often of a sexualised nature, and often including the victim’s real-life addresses ­– are used to torment and terrorise women who speak out”.

“The vast and transnational connectivity of the Internet enables rapid and massive dissemination of slander, mobilising very large groups of hostile individuals across broad distances, hiding behind anonymous profiles. It also makes removing the false or violent content extremely challenging,” he added.

In his speech, the UN human rights chief specifically mentioned the case of two Indian woman journalists, one of whom was assassinated in 2017 in Bengaluru. “In India, Gauri Lankesh, a journalist who published criticism of Hindu extremism, was killed last year following widespread online calls for violence against her; and her colleague Rana Ayyub has been subjected to thousands of hate-filled messages, including calls for her to be gang-raped and murdered, with dissemination of her phone number and home address”.

Even as the external affairs minister’s account was being targeted with online vitriol, the Indian statement at the UNHCR said at the discussion that “India has taken various steps to address cases of online violence against women”.

India even claimed that it was simpler now to remove abusive material from the internet.

“A Central Reporting Mechanism is being created to work as a hotline for easier reporting of any cyber crime. The process for removing objectionable imagery from the digital space is also made easier. Increased awareness is being promoted among public and authorities on better prevention and redressal,” it said.