The matter was referred to the larger bench by a three-judge bench headed by the chief justice, which has framed questions for the constitution bench to discuss. 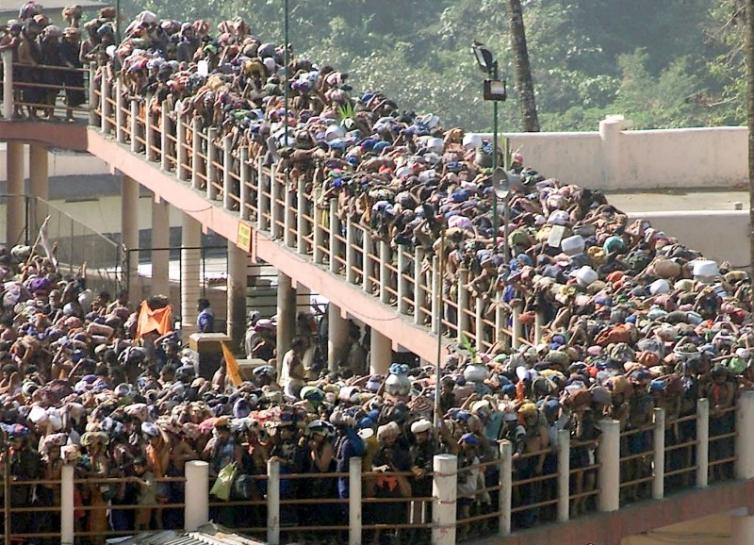 Hindu pilgrims queue outside the Sabarimala Temple to offer prayers to the Hindu deity "Ayappa", about 70 km west of the town Pathanamthtta in Kerala, on January 15, 2003. Credit: Reuters/Dipak Kumar/Files

New Delhi: A five-judge constitution bench of the Supreme Court has decided to adjudicate whether women between the ages of 10 and 50 should be denied entry into the Sabarimala Ayyappa temple in Kerala because they menstruate.

The reference to a larger bench was made by a three-judge bench headed by the Chief Justice Dipak Misra in a batch of petitions filed in 2006 by the Indian Young Lawyers Association and others opposing the ban on the women’s entry to the temple. The ban, the petition says, is discriminatory and violative of Article 14 of the constitution (right to equality).

The petitioners said there is no religious custom in the Hindu religion, especially in Pampa river region, which disallows women entry into temples while they menstruate. According to them, banning the entry of women would be against the basic tenets of Hinduism. Notifications which stipulate a ban for women aged 10-50 is contrary to the 1965 Kerala Temple Entry Act as well as the constitution, they have said.

It was argued that such a restriction is contrary to the letter and spirit of the constitution as enshrined under Articles 25 and 26. Further, Sabarimala is not a denominational temple but a temple for all Hindus and, therefore, Article 26(b) (giving such protection) is not attracted. The said temple permits all categories of Hindus to enter the temple, according to the petition.

The Travancore Dewaswom Board that manages Sabarimala Ayyappa temple justified the restriction on the entry of women on the grounds that the deity, Lord Ayyapa, is a ‘Naisthik Brahmachari’ (celibate) and said that 1,000-year-old custom and religious practice cannot be interfered with. It said for several centuries, it has been a practice in the temple located in a forest-notified area to restrict the entry of women who are in the age group of 10-50 years as the deity did not want his penance to be disturbed.

Hindu pilgrims queue outside the Sabarimala Temple to offer prayers to
the Hindu deity “Ayappa”, about 70 kms west of the town
Pathanamthtta in Kerala, on January 15, 2003. Credit: Reuters/Dipak Kumar/Files

When the lord himself says don’t allow access to women in the age of 10 and 50, how can the court go into that question. The court will be going great injustice to millions of devotees if it interferes and will set a precedent which will seriously affect other religious institutions, the board asked.

It was submitted that this religious practice is not discrimination against women. In all other Ayyappa temples in Kerala, other parts of the country and abroad, women are allowed entry without any discrimination. It said Article 25 of the constitution gives the temple the right to manage its own affairs.

The Kerala government informed the court that women of all ages should be allowed entry and worship at Sabarimala Ayyappa temple without any restriction. It said that the government was sticking to its 2007 stand, when it filed an affidavit seeking the removal of the ban.

Those who supported the ban submitted that the concept “essential part of religious practice” has to be decided by the court with reference to the practices which are regarded important by large sections of the community for several centuries. The petitioners said that religious practice based on faith adhered to and followed by millions of Hindus for over a millennium, in consonance with the natural rights of men and women, does not violate fundamental rights without appreciating the scope of these rights.

Taking note of these submissions, which included the plea for reference to a larger bench, a three-judge bench of Chief Justice Dipak Misra and Justices R. Banumathi and Ashok Bhushan framed the following questions for determination by the larger bench: