A woman spokesperson for the All India Muslim Personal Law Board said that most Muslim women in the country did not agree with calls for the reform of Muslim personal law. 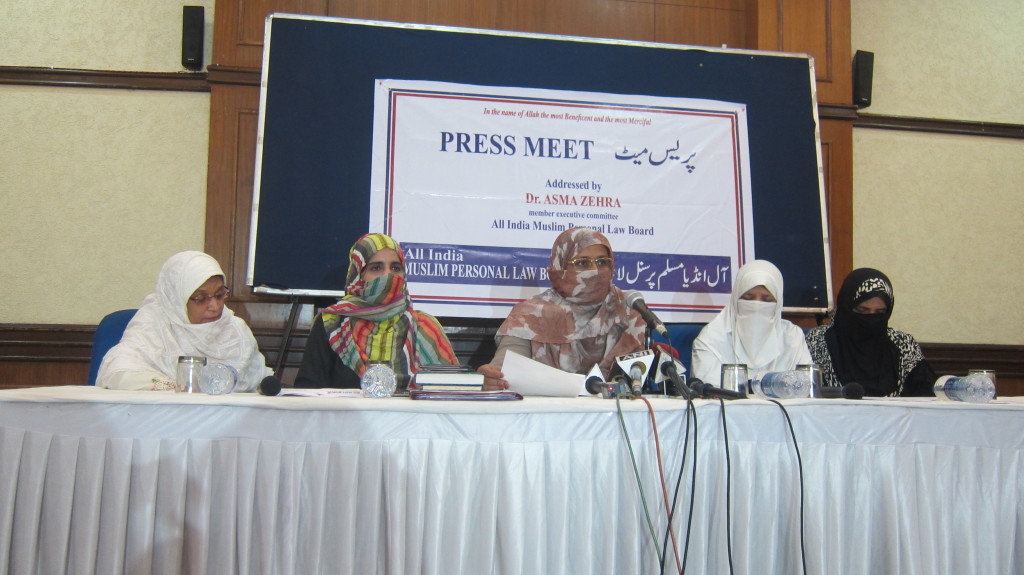 New Delhi: In a strongly worded statement, women members of the All India Muslim Personal Law Board (AIMPLB) have spoken out against what they call a “media campaign” to discredit Muslims and attack Muslim personal law on the issue of triple talaq.

One of the five signatories of the statement, Asma Zehra, who is an executive member of the AIMPLB, said in a press conference in New Delhi on June 3, “Nobody has the right or power to change the Muslim personal law. Most Muslim women in India do not want any change in this law and will definitely come forward to protect it.”

The AIMPLB is contesting Shayara Bano’s petition to the Supreme Court challenging triple talaq, polygamy and halala. As The Wire has reported, Muslim women’s rights activists have rallied behind Bano and have renewed calls for gender-just reform in Muslim personal law. Since Bano’s petition, another woman called Aafreen Rehman has also challenged instant triple talaq in the Supreme Court.

Zehra said that those who did not want to follow Muslim personal law were free to marry under the Special Marriage Act.

Zehra said, “The media is claiming that divorce is rampant among us, which is totally untrue. Divorce is disliked and discouraged in our community. Even if we have 1% in common we are ordered to stick together in order to save the family from breaking and to preserve the institution of marriage.”

“This is a conspiracy against us,” she added. “Shariah law has been around for 1,400 years, then why has one community been targeted for the last two years?”

Arguing that the personal law is divine and that the women’s rights activists supporting the ban on instant triple talaq are “opportunistic, publicity-seeking feminists who have no expertise on Islamic law,” Zehra said, “Such so-called liberal groups and women’s rights activists are being used as tools by anti-Muslim forces” who want to enforce Uniform Civil Code in India.

One of the groups that Zehra directly referred to was the Bharat Muslim Mahila Andolan (BMMA), which found in a survey that 92% Muslim women in India want oral triple talaq to be outlawed. The same group also sent a petition to the National Commission of Women on the matter, which was signed by 50,000 people.

Zehra claimed that both the study and the petition are “concocted and baseless” and that groups like the BMMA have “no credibility” among most Muslims in India, possibly in direct response to the BMMA’s call to dissolve the AIMPLB.

When asked about her response to the fact that the BMMA has taken a public stance against the Uniform Civil Code and that it has asked for Muslim personal law to be reformed and not dissolved, Zehra told The Wire that activists with the BMMA and other critics of triple talaq “have not read or understood the Quran, hadith or fiqh properly.”

Several Islamic countries around the world have banned the practice of triple talaq. In response to questions about why India does not follow suit, Zehra said, “Other countries are not our role models.”

On the practices of polygamy and halala, Kamal Faruqui, executive member of the AIMPLB told The Wire, “Polygamy is allowed only under very extreme circumstances. Halala is being misused and misinterpreted. It should not be done with the intention of marrying someone just to divorce them and go back to a previous husband. Rather, if the second marriage dissolves or if the husband passes away, then the wife can go back to her previous marriage.”