The differences between Narendra Modi and Pranab Mukherjee's recent speeches are as clear as day and night. What should we take away from them? 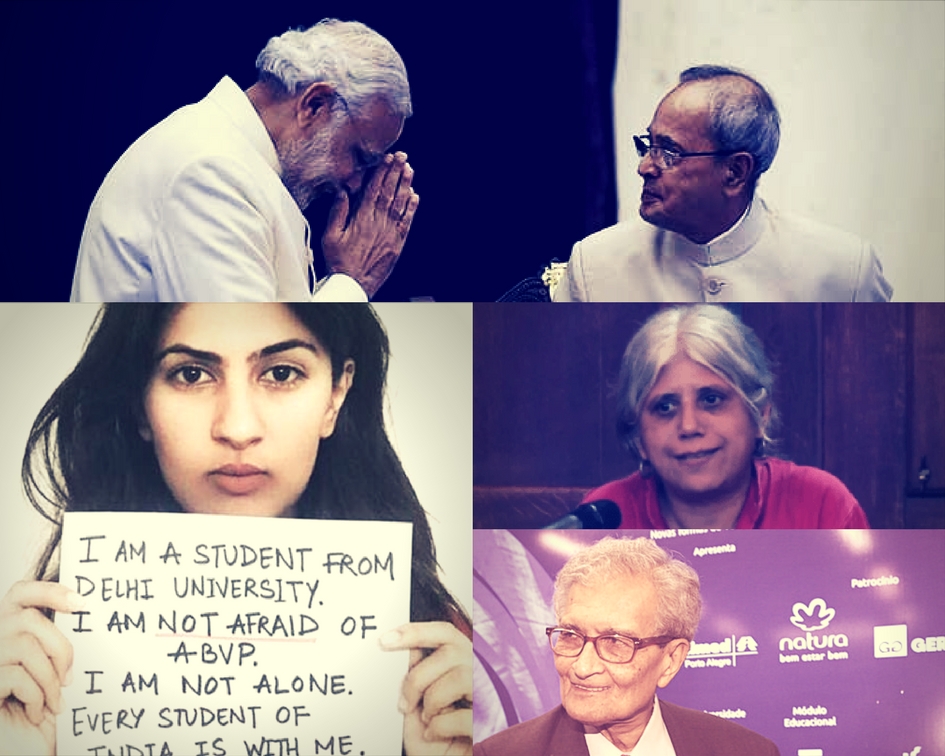 An election rally in Uttar Pradesh has one, a memorial lecture in Kerala has another.

In Maharajganj, UP, on March 1, our prime minister turned to punning in English to say ‘hard work’ was more important than ‘Harvard’. He was, without naming the Nobel laureate, taking a swipe at Professor Amartya Sen’s critique of demonetisation. But in the process, he made ‘Harvard’ a metaphor for what might be called a life of the intellect as opposed to ‘hard work’, such as, one may argue, the life of a peasant –  though, in characteristic style, he held himself up as exemplar. Universities, he seemed to suggest, made for a ‘bookish’ knowledge that was distant from and unfamiliar with ‘hard’ realities which, he suggested, included a demonetisation-triggered spurt in our growth rates which ‘hard working’ farmers could recognise, but Harvard professors and universities, in general, were missing. This, coming within days of the violence unleashed at Ramjas college, seemed to mail a clenched fist at ‘higher learning’.

On the very next day,  March 2,  President Pranab Mukherjee, giving the K.S. Rajamoney memorial lecture in Kochi said something which seemed to contradict Prime Minister Modi. India’s president said in his speech that universities must “resound with… free thinking” and “…there should be no room in India for the intolerant Indian”.

A former president of India, and one of the most intellectual amongst them, the Kerala-born K.R. Narayanan, would have complimented Mukherjee on his speech. The criticism, indeed, outrage, that the swipe at Sen has occasioned in academic circles in general and in West Bengal in particular, would not have been lost on Mukherjee who, like the Nobel laureate, has an ancestral home in Santiniketan’s environs.

Did President Mukherjee, himself a former college teacher, mean his extolling of free speech in universities as an indirect retort to Prime Minister Modi’s comment on ‘Harvard’ ? I certainly hope he did. Hard-selling politics may justify political barbs at political opponents but they cannot explain away rudeness and discourtesy towards a teacher of all time class, who has not only been awarded a Nobel prize and the Bharat Ratna but on whom the university – Visva-Bharati – of which the prime minister himself is chancellor, has conferred its highest tribute: the Desikottama.

It does not need to be said, not in this day and age of the most rigorous researches, whether in the ‘pure’ sciences or in the social sciences, that intensely hard work goes into responsible learning, researching, teaching and disseminating knowledge. It serves our country ill to ridicule intellectual energy, no less than it would, to deride physical labour. To make light of  the services of an intellect that has brought issues pertaining to poverty, labour, health and malnutrition to world attention, is to put up a false and tendentious dichotomy between a life of the mind and that of physical labour – particularly egregious when the ‘Harvard professor’ has done more to highlight and alleviate the condition of India’s peasantry than mocking and manipulative politics can ever hope to.

President Mukherjee also said something else in his Kochi speech which the state with the highest female literacy rate in India (92%) would have understood and appreciated.

“Protection and safety of our women…”, he said,”…must be a nationwide priority”. “The acid test of any society”, he went on, “ is its attitude towards women and children”. And then in an admonitory sentence worthy of his high office, the president said: “India should not fail this test”.

Did that line reflect an anxiety that India has indeed failed the test, repeatedly and unrepentingly? Was the president adverting to the recent experiences of two women – Bela Bhatia and Gurmehar Kaur? I hope he was.

Bela Bhatia, the Bastar-based researcher and activist had, last month, helped a team of the National Human Rights Commission investigate complaints of rapes by the security forces. A couple of days thereafter, she was told to leave her house in the village of  Parpa, outside Jagdalpur, or “face the consequences”. Told? By who? One could call “them” by a variety of names. They came  to her house in the middle of the night, told her to leave, and pressured her landlord to evict her. Landlords in villages are rather different from their counterparts in Delhi or Kolkata or even Ranchi. And pressure in a village in Bastar is very different from pressure, as that word is understood, in cities.The pressurisers came to Bela’s house in a Bolero-type vehicle and several motorbikes, and told her to leave immediately. Threatening to burn the house down and kill her dog, they refused to “give” Bela the few days’ time she asked for in order to move. Bela had, at that point, to leave.  She is brave and persevering and is not one to be subdued but that is not the point. The point is that “the woman” whose safety and protection, according to our president, goes to make India civilised was un-protected from a band of intimidating and minatory men. A civilised nation waits to know what the police investigation – if any – has unearthed about that shameful episode and what has been done to give Bela Bhatia the security she is entitled to.

Gurmehar Kaur of Lady Shriram College gives us our second example. She was threatened with all the consequences that a vulnerable woman can be expected to face. Home minister Rajnath Singh made a good and prompt statement to the effect that she is a daughter of India and that “it is our moral responsibility to see that she is protected”. But in matters like this, action speaks more than words. If the truth about Gurmehar’s experience remains unknown, what distinguishes Delhi from Bastar?

These two women have been pressured for their intellectual stances. Those stances are ‘hard’. Courage is hard. The courage of one’s conviction is hard to keep.

And apart from the women who – like Bela Bhatia and the young Gurmehar – are taking up cudgels for human rights, human dignity, gender issues, ecological protection, are those millions of ‘just women’  and children, unrelentingly targeted by a slice of male India, macho and morbid, who have to be as alert to their safety as potential preys to jungle predators. On March 1, that is, the same day as our prime minister’s ‘Harvard and hard work’ speech, and the day before President Mukherjee was to talk about the safety of women and children in India, an RSS leader in Ujjain reminded the nation of 2002 – not to lament the Gujarat pogrom and the rape and murder of women and massacre of innocents including children, but to preen about it. President Mukherjee’s anxiety was, literally, one day not-too-soon. Self-protection by our women and children is going to be hard work as well.