Why Do Men's Rights Groups Feel the Need to Defame Women Saying #MeToo?

Instead of demanding a men’s commission which might further complicate gender-based issues, the men’s rights activists, feminists say, should question false ideas of masculinity. 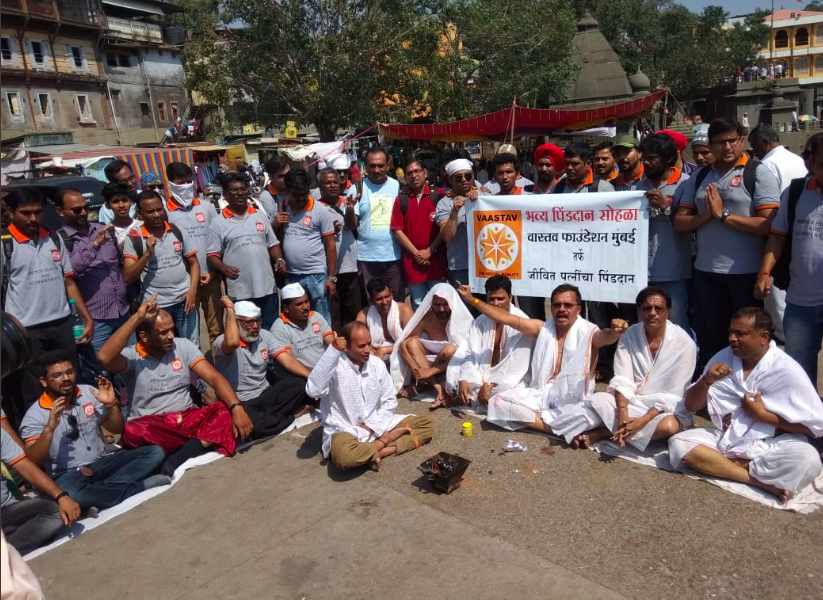 New Delhi: On October 7, self-acclaimed male rights activists of the Vaastav Foundation gathered to perform final rites of their dead marital relations at Ram Ghat in Nashik in protest against the rise of feminism which they claim has broken families, besides putting several lives at risk.

Dubbed as the ‘Pishachini Mukti Puja’, the process involves taking a dip in the holy water to symbolically express anguish against what they feel is an assertive feminist culture in the country. With enormous support from ‘distressed’ men countrywide, there have been several such processions in the past as well.

Furthermore, BJP’s Harinarayan Rajbhar has demanded the formation of a Men’s Commission to look into their grievances in the wake of – what they perceive as – fake rape allegations and male suicides. Leveraging the pretext of false allegations of sexual assault and legal misuse, male rights forums like Save Family Foundation and Vaastav Foundation have unleashed a counter-narrative to the rising #MeToo movement.

The organisations, through their social media handles, have been routinely defaming women who have shared harrowing experiences via social media. From raising doubts over Tanushree Dutta’s statements to extending support to BJP MP Udit Raj, who has called the MeToo movement ‘wrong practice’, men’s rights activists have been repeatedly holding ‘feminists’ guilty for ruining lives of men. With thousands of followers and active state-level branches, their repeated attempts to malign the movement are worrisome and therefore need to be addressed.

Men’s rights activism is almost a decade-old movement in India which has progressed over the past few years. What started off as a protest against fake dowry cases soon turned into a medium to stifle feminist voices in the country. While there is no denying that misuse of dowry laws and fake allegation of sexual assault occur as is evident in the Arnesh Kumar vs state of Bihar & Anr case and various others, derogatory hashtags like ‘#Feminism_ is_ Cancer’ or ‘#Pishachini_Mukti’ only downgrade a long-awaited movement. 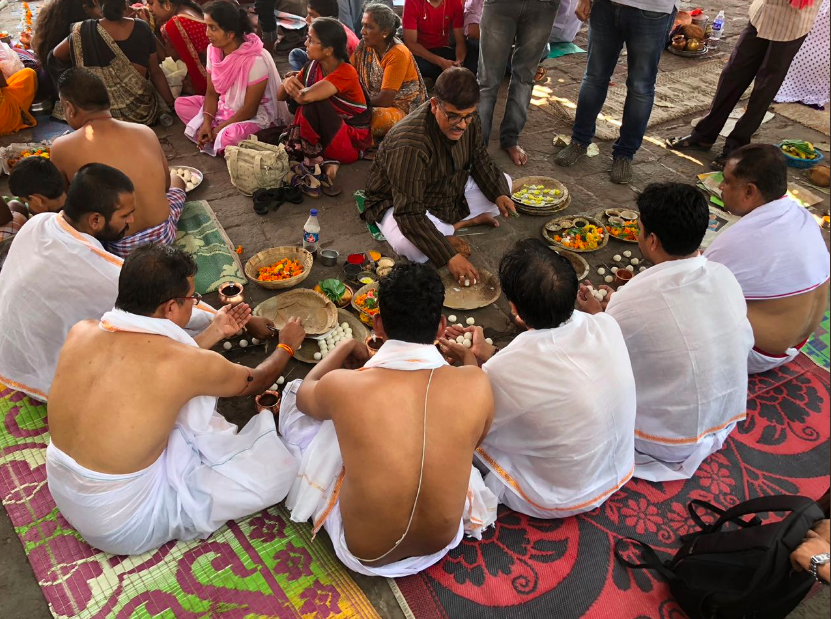 Men’s rights activists repeatedly complain about rising cases of suicide and misuse of IPC Section 498A to suppress strong feminist voices. However, several studies have disproved these fallacies.

In order to pose a counter-narrative to the statistical manipulation exercised at hands of men’s rights activists, Vimochana, a women’s rights organisation, conducted a study in 2017 to understand Section 498A’s implementation and effectiveness. Bindu N. Duddahatti, litigator at the Alternative Law Forum who was part of the research team, described two major findings of the study to debunk some myths.

The first one is the myth of indiscriminate arrests of husbands and others named in the complaint filed, and second, the increasing male suicides prompted by false reports. The study showed that over 70% of the accused paid for their anticipatory bail and 24% of the accused were arrested under 498A. The NCRB data clubbed the accused (who paid for the bail) in the same category of ‘arrested person’. And this clubbing automatically increased the total number of men arrested.

While we need to revamp the legal framework to look into the cases of 24% of men who are falsely accused, demonising women and downgrading #MeToo in that process harms thousands of women who face domestic abuse, workplace harassment and sexual misconduct on an everyday basis.

Although we cannot dismiss the false cases of dowry and sexual assault, one can also not deny the statistics which reveals the everyday torture faced by married women, or women in general, which is far more than that of men. Therefore, there need to be proper investigative channels to ensure fair judgement regardless of gender.

Meanwhile, there is also a need to unravel societal problems faced by men and examine the larger issue behind it. However, the conversation around the demand for a men’s commission is more about blaming women rather than discussing men. For instance, the activists do not address issues of trans-men or Dalit men and how the larger spectrum of caste and gender affects the social fabric of the country.

What about Dalit and trans men?

Male rights activism is clearly not inclusive of men belonging to marginalised sections of the society who have been forced to tolerate caste- and class-based discriminations for centuries. Thousands of men are being killed, murdered and lynched for consensually marrying women they love. There are thousands of others who die in filthy gutters without receiving any financial or moral support from anyone. Instead of raising these pertinent issues that are affecting men in the country, men’s rights activists resort to blaming women. 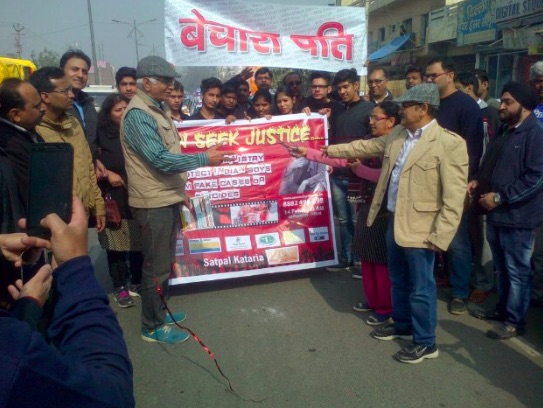 For instance, on October 4, a lower-caste man was brutally beaten by the family of an upper caste woman he loved. The men’s rights activists twisted the narrative and put the blame on the women for instigating the crime while dismissing the larger issue of caste which leads to such atrocities.

Apart from these, there are many trans-men who face assault of various kinds on a daily basis. However, the ‘men’s’ rights activists never take cognisance of it and instead use these cases to only malign women or feminists who have to battle innumerable odds to achieve equality in the society.

They strongly opposed the decriminalisation of Section 377 and demanded its repeal. Instead of showing solidarity with trans-men, they share homophobic content on their social media handles mocking the entire LGBTQ+ community.

One of the stalwarts of male rights activist, Amit Deshpande, in his TED talk, spoke about how men are always expected to perform certain kind of roles in the society and how the society discourages them from expressing their internal conflicts. That men are forced to behave in a certain way, Deshpande observes, is because of the culture of patriarchy and not because of women activists or feminists, as male rights activists argue. For instance, a well-known phrase that many believe define patriarchy is ‘men don’t cry’. Feminism, on the other hand, scholars and activists argue, provides space to people across the gender spectrum, encouraging them to be their natural selves.

Also read: The Economics of #MeToo and How to Fight Back Against Harassment

Acclaimed documentary filmmaker Rahul Roy, who has written extensively on various shades of masculinity, made a film on men (under the series of South Asian film project ‘Lets Talk Men’) to bring forth their everyday conflict with illogical social expectations. Divided into two parts, the documentary traces the journey of four lower-middle-class men over the span of ten years.

Encouraging conversation around sexual harassment to ‘male sensitivity’ and parental pressure, the first part of the film (When Four Friends Meet) brings out different layers of masculinity and explains how they introduce toxicity in society. The second part of the film brings to light the culmination of this toxicity where those men justify beating their wives while they used to be against wife-beating a decade prior to that.

Feminists do acknowledge the need to have a discourse around masculinity and the ‘boys-will-be-boys’ culture. However, they also point out that maligning women is not a pre-requisite to having such a discussion. Instead of demanding a men’s commission which might further complicate gender-based issues, the men’s rights activists, feminists say, should question false ideas of masculinity forcing them to fit a stereotypical idea of how men behave.

At a time when women are shattering glass ceilings and moving out of their own comfort zones, isn’t it time for men to become partners in this movement?

Tanya Jha is an intern at The Wire and is a post graduate in media studies from Jamia Millia Islamia University.