A recent wave of braid-cutting incidents has sparked fear and anger throughout the Valley, with locals blaming the government for not acting quick enough. 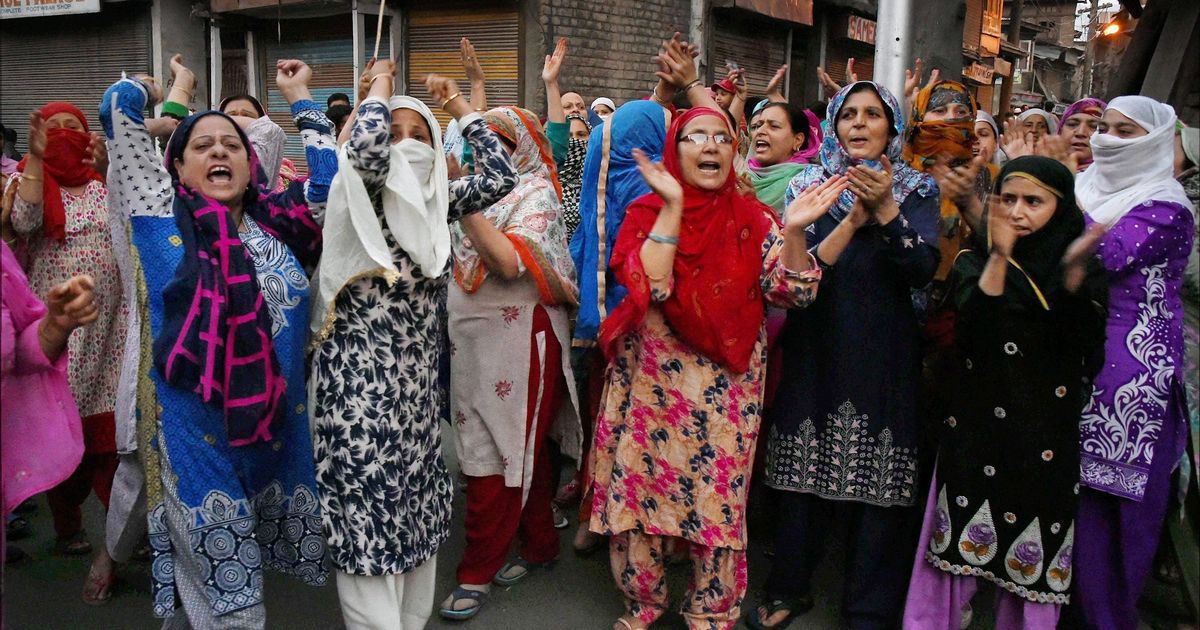 Srinagar: On a cool October evening, Shafeeqa had stepped out of her house to dump the leftovers of dinner in a dustbin when, she said, ‘a masked man sprayed something on her face’.

She fell unconscious, and when she woke up a few minutes later, the 37-year old from uptown Srinagar found her plaited hair was missing. Soon afterwards, panic gripped the locality and youth, armed with sticks, were out on roads hunting for the alleged braid-chopper.

“They were two men, one of them grabbed me from behind and took out something from his pocket and sprayed it on my face. I tried to raise alarm but felt I had no energy. I don’t know what happened then,” Shafeeqa said later, while remembering the incident.

This incident isn’t the first of its kind in the Valley and indeed is part of a mysterious phenomena that has spread across the region, causing in equal measure fear and anger.

It was on September 6 when a case of braid chopping – similar incidents have been reported across North India, where women are accosted by strange men, fall unconscious and then wake up with their hair sheared –  was first reported from the Kokernag area of Anantnag in the Valley.

A teenage student named Naira Nazir was found lying unconscious inside her room, her braid chopped. Within days, the similar copycat crimes were reported in the neighboring districts of Kulgam and Pulwama in south Kashmir. A month later, protests against the alleged braid cutters started taking place on a daily basis across different districts, with Srinagar only being the latest.

In the past 35 days around 73 hair-cutting incidents have been reported from across the Valley with Kulgam accounting for the highest number of 28 such cases.“We are warning the government to put an end to this menace soon otherwise it will have to pay a heavy price,” an angry woman, identifying herself as Jana Begum, tells the government in a video that has gone viral on social media. Begum’s daughter was found in an unconscious state at her house last week, her braid chopped off. On Sunday (October 8) six incidents of braid chopping occurred across Kashmir – three of them in Kulgam, two in Srinagar’s Batmaloo and Qamarwari localities and one in Baramulla.

With panic gripping the Valley, the National Conference’s women leaders and activists took out a protest march in the city against government’s failure to ensure safety of women.

“Braid chopping is an assault on womanhood. Despite being a woman the chief minister Mehbooba Mufti is unmoved about the growing incidents. It has become increasingly unsafe for our women to walk out of their homes,” said NC’s women legislator Shameema Firdous.

In different parts of city and across villages, people, armed with sticks and iron rods, have now started night patrols to scare away the alleged hair cutters.

This rise in citizen patrolling and vigilantism has also led to cases of where innocent people have been injured.

A 70-year-old man, Abdul Salam Wani of Anantnag, died on October 6 after he was mistakenly identified as braid cutter and hit with brick by his nephew. The victim was engaging in public urination when the tragic incident took place. Local media have reported  of multiple daily incidents where people catch and beat suspected braid choppers, only to find them innocent later. In some cases, young lovers as well as tourists have become the victims of mob justice.

In one such incident, on October 2, Nayeem Ahmad Malla of Rafiabad had gone to meet his girlfriend in the nearby Delina area of Baramulla. While waiting for the girl in her locality, the villagers became suspicious of him and caught hold of him.

Fearing for his life Malla tried explaining his situation, but by then a large mob had gathered. The 20-year old youth was severely thrashed, with his clothes torn apart. It was only after police rushed to the spot that Malla was saved.

Similarly a transgender from the Vessu area of Anantnag was on way to her home from Srinagar when she was caught by auto drivers near Zero-Bridge (Lal Chowk) earlier this week. “Soon people rushed towards me and started beating me,” the transgender is seen explaining in a video that was circulated on social media. She too was saved by the timely intervention of police.

On October 6 six foreign tourists – three Australians and one each from South Korea, Ireland and England – had a narrow escape in Srinagar when locals mistook them for braid choppers.

The tourists, including two women, were returning from Kargil in a cab when they lost their way deep inside a locality in Dal lake area at around 2 AM. “It was only due to some elders who intervened to save the holed up tourists and made a call to local police station,” said a police official.

In Ganderbal district, people thrashed two mentally ill persons, mistaking them for braid-choppers, on October 7 while as three non-locals who were guests to a Ganderbal family were thrashed in Shallabugh area late on Tuesday evening, leaving then with multiple injuries.

“We can’t rule out genuine concerns but the situation is turning ugly. Every day we come across incidents were an innocent person is beaten only because of the over-zealous vigilantism. This is only bringing bad name to Kashmir,” said a local journalist, who declined to be identified.

So far not a single alleged braid cutter has been arrested by police. But with each new incident both fear and confusion are on the rise, making the government the target anger amid a larger rise in anti-government protests. That the police have so far failed to come up with anything concrete explanation for the incidents has not only put the government in the dock but reinforced the perception among masses that law enforcement agencies are allegedly behind the incidents.

“I am looking for a jaadu ki chadi (magic wand),” the director general of police told a local news agency on October 8, weeks after the chief minister constituted a special investigation team (SIT) and announced Rs 6 lakh as reward for providing information that could help solve the mystery.

Amid the growing atmosphere of uncertainty, both security agencies and militants have accused each other of carrying out the attacks. The Hizbul Mujahideen’s top commander Riyaz Naikoo has termed the braid-chopping as “a ploy to counter militant attacks”.

“It is an Indian ploy to scare people and keep them away from militants. The militants have successfully hid their movement for past two months and agencies have failed to trace them. This (braid chopping) is a new propaganda to trace them (militants). The government agencies know that people would raise an alarm out of fear when militants try to enter a house. This will expose the movement of militants and it will be easy to trace them,” Naikoo said in an audio message released on social media earlier this month.

The police however termed the allegations as “ploy by seperatists and militants to use them in their favor”.The wave of panic triggered by the haircutting across the Valley has now forced the high court to step in, asking the government to provide the status of the investigation conducted by it so far into the braid chopping incidents.

The court’s division bench issued the notice on a PIL that questioned government’s lackadaisical approach in getting the incidents investigated.

While the people have out rightly rejected the theory of mass hysteria, senior Peoples Democratic Party minister Altaf Bukhari spoke openly about the issue at a function in Srinagar on October 10, terming braid chopping a “phobia and a kind of hysteria”. “In 90% of cases, it is more of hysteria. We have to handle it with courage as people are disturbed psychologically,” Bukhari said.

He cited an example of a maid at one of the houses in his constituency who, according to him, was facing some sort of psychological problems and cut the braid of another woman.

“Let me be very clear, it is a phobia. When there is no culprit, whom to arrest. It (braid chopping) is not true the way it is being circulated,” he said.

The police too are now terming the phenomena as “mass hysteria”, asking people to stop circulating videos on social media to put an end to the menace. It has even warned strict action against “rumor mongers”.

But with new cases surfacing every passing day, it is proving to be a mounting challenge for the Mehbooba-led government, which is increasingly becoming the target of womenfolk.

“Is it not a paradox that police claims these are cases of ‘hysteria’ and yet announces an award of Rs six lakh for identifying the culprits,” Anuradha Basin, executive editor of Kashmir Time wrote recently.

“If you so well understand that there is method in this madness aimed at creating panic and pushing Kashmiris towards street protests and Valley into chaos, why not replace these knee jerk reactions with pragmatism to defeat these designs rather than serving them.”