Like the IPL, Indian Sports Journalism Is a Boys' Club With a Sexism Problem

Female participation in sport should not depend on the number of women who write about sport. The skewed coverage owes much to the same culture that privileges a ‘pretty face’ over her knowledge of cricket. 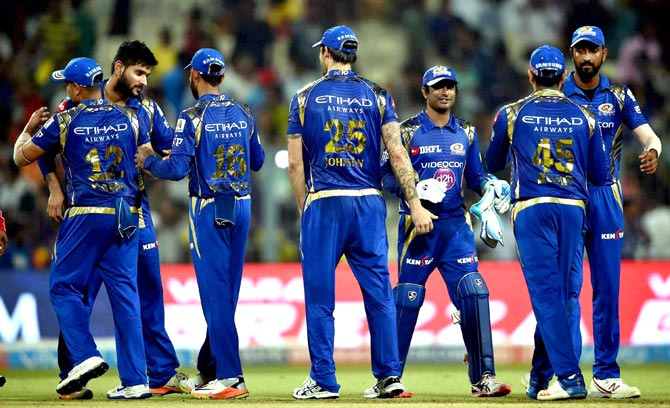 The Indian Premier League (IPL) draws to a close today (May 21). Yet, a moment will stay with us for years. No, it was not a wonderful piece of skill on the field. Rather, an unseemly incident which passed away without much hullabaloo. Notwithstanding the largely muted reaction, it was another reminder of the parochial attitudes which lurk at every corner in the world of sport.

In case you missed it, here are the details. As the umpires walked out to officiate the clash between Kolkata Knight Riders and Rising Pune Supergiant at Eden Gardens, Kolkata, on May 4, a woman in a black gown awaited them. She stood next to a box of apples with the match ball nestled between them.

Once the umpires approached the lady, she picked out an apple and offered it to them in a suggestive manner. After one of the officials, K.N. Ananthapadmanabhan, refused the fruit twice, she then picked out the white ball and everyone carried on as if nothing had happened.

So, where does one begin? A woman being unable to identify the cricket ball from a box of apples seems like a good point. For a tournament that makes a play of attracting all kinds of viewers, it was revealing to see how it perceives women. Then, of course, there is the question that why the abhorrent sketch should even be allowed to exist.

But the incident was not out of place in the IPL. In fact, it is another low point for a tournament that actively reinforces sexual stereotypes. Indeed, back in 2013, the business head of the official broadcaster was quoted by Wisden India as saying, “The focus is on fun and entertainment and not on serious cricket. The girls are not chosen for their knowledge of cricket.” He added that the women presenters change every year because they need to be “younger and fresher.”

But whatever has come the IPL’s way as criticism in this regard has certainly had little impact. The pre-match show cannot do without cutting to studio dancers at least 20-30 times during its broadcast, the on-field female reporters are expected to carry out inane interviews and the cheerleaders are overwhelmingly white. The last of those issues was addressed by a cheerleader two years ago, “I hate the racism. Why is my team made up of 99% white girls? Why do Indians feel it’s ok to dress white girls up in skimpy outfits but they won’t let their fellow Indian women do it? It’s messed up.”

But any criticism of the IPL needs to understand the space afforded to women in popular sports media and the obstacles they constantly battle. The franchisee cricket tournament, one could argue, is only the tip of the iceberg. Sports journalism, like the IPL, is among the most male-dominated of spheres. Although more women enter the profession now than before, its perspectives remain overwhelmingly skewed in favour of male athletes and media professionals. Male perspectives on sport abound, the national team almost always signifies the men’s national team and women are often relegated to the status of second-class citizens.

Yet, the light does seep through the gaps in the wall. When it does, it shines brightly. In the sports media industry, women feature prominently among the best sports writers and TV journalists. A conversation with some of them opens one’s eyes to the discrimination which exists and how it is overcome.

Sharda Ugra, now a senior editor at ESPN India, has been a vocal critic of the sexism within the IPL. She believes that women who enter sports journalism today face greater pressures than when she began in the late ‘80s.

“I started working with Mid Day, which was an afternoon paper. My job was to find stories that were not in the morning edition. But, I would really struggle today. There are greater demands with the use of social media and access is much more difficult. It is simpler in other sports but not cricket.”

When it comes to the IPL, she sees major contradictions. After all, it is among the very few cricket tournaments to give space to ex-women cricketers as commentators for men’s matches. “It is a very strange thing in the IPL. Melanie Jones had been a commentator for 10 years and did not call a men’s match in Australia… There are two things at operation. One lot puts the commentators out and one puts the Extra Innings (the IPL show) staff together.”

It is a contradiction that continues to flourish seemingly unabated. But even the IPL has not been able to change the perception that television commentary is still a ‘man-den’. NDTV’s Rica Roy points out that women commentators still do not get a gig at major international cricket tournaments. There will be no women commentators for the Champions Trophy which begins in England next month. The sanctity of the gentleman’s club is only subjected to cosmetic threats.

Roy’s opinions about the general state of affairs for women in sports journalism only reinforces the point that women have to work doubly hard to justify their position within the profession.

“Men consider they belong here. Men tend to think what would a woman understand about sport? I began working at the age of 17 but people did not take me seriously as I didn’t have a press pass. I was once asked why would I require a media pass? But my work has changed perceptions.”

This is a struggle that is not alien to sportspersons either. Shooter Shagun Chowdhary spoke for many others when she told Scroll.in, “More than anything, it’s stressful and slow to be a professional in an industry that is dominated by men.”

Even when women do stellar work, they are often subjected to patronising feedback. Aakriti Mehrotra, a freelance sports writer in New Delhi, spoke about her experiences with ‘mansplaining’.

“I’ve been told constantly that my interest in sports is ‘surprising for a girl’, that my knowledge of football is ‘great for a girl’. I remember a piece I had written after an ISL match. Someone told me why my facts were entirely wrong, when those same facts/stats had been used by everyone to write their reports. It was an opinion piece! Online criticism of men is about the sporting issue, then why is most of the criticism women face about their gender? We want to talk sport!”

Yet, sport continues to be seen as a space which women should not ‘infiltrate’. As Mehrotra added, one man once told another woman on Twitter, “Sport is where he goes to get away from women.” The last time I checked, there was no asylum for his troubles.

But it is worrying that such attitudes are not rare. Even when similar opinions are not articulated, female journalists are constantly aware that they are functioning in a space which remains more male dominated than others. Dressing for work can become a task fraught with challenges. Ugra spoke about how she sought to be as ‘invisible’ as possible in her early years, not preferring to stand out in the crowd. In fact a women’s dress may go on to decide how seriously she is viewed, as Aakriti Mehrotra recounted in an anecdote.

“I have been made aware of the clothes I’m wearing, a few times. Funnily enough, a female colleague of mine, who has been in the field for the longest time, said to me that she has a whole collection of formals because in her position, people take women more seriously when they wear trousers etc and look like the equal of a man. I wonder if I will have to do the same in a few years.”

However, Roy is adamant that she does not “want to be like a man.” She adds that, “Dressing is about breaking barriers. I did get stares when I wore a skirt in the press box.” But she stuck to her choices and let her work speak for herself.

However, when one’s attire is supposed to signify one’s commitment to the job at hand, it should worry all of us about the culture of work that exists. Star Sports presenter Mayanti Langer is aware that she is, at times, judged by different standards. “Social media puts me in that box. People define me by my clothes and how I look. You can’t change the way they think. But that is certainly not the case with male anchors.”

Public perception challenges women in unexpected ways, even when they continue to set high standards for work. Indian Express’s Shivani Naik, who refuses to entertain any gendered expectations that people may have of her, talked about the backlash she received for a piece.

“Twitter had a field day when I called [P.V.] Sindhu ‘pretty’ and wrote about her hair. My three years of painstaking following of her badminton, writing a 100 pieces on her badminton, all the thread-baring of her game was tossed aside to pick up on my description of her as ‘pretty’… I’d rather write on my hardy rugby blokes – no one seems to mind my detailing of their beards and unruly hair which I routinely do. But I loved writing on Sindhu and will continue to sneak in details and if needed, call her gorgeous. Twitter can’t kill my enthusiasm for descriptive details.”

This can be said of every journalist who was gracious with her time for this piece. The IPL may present women in an inappropriate light, the sports media industry may systematically exclude or sideline women but their desire to provide perspectives which enrich our understanding of sport still thrives. If anything, there is a need for media professionals to counter the culture of public silencing or unfair criticism of women.

Some suggest that the conditions will change when female journalists take more senior roles in newsrooms. The implicit understanding is that ‘women’s issues in sport’ will get a fairer airing then. However, that would miss the point. When Sindhu wins an Olympic medal in badminton, it is not an occasion for only the women to rejoice. Female participation in sport and the interest we afford to it should not depend on the number of women who write about sport. The skewed coverage owes much to the same culture that privileges a ‘pretty face’ over her knowledge of cricket.

But if we are going to argue for a change of outlook, there is a need to understand what sport means to us. Playing and writing about sport is, worryingly, seen as something that men do. We need to challenge sport’s description as a male bastion. Countless times I have been told by women that they do not really care for sport. It is, arguably, reflective of what sport has come to signify. If women feel excluded from it, perhaps it is sport that we need to redefine.

Of course, it will help if a woman is not shown as someone who cannot pick a ball out from a box of apples. How do you like them apples, you ask?

No, seriously, put them away.