Marital Rape Needs to be Punished, Indian 'Culture' is No Excuse

Indian lawmakers would do well to remember that we cannot ignore progressive international legislation when it comes to gender-based violence. 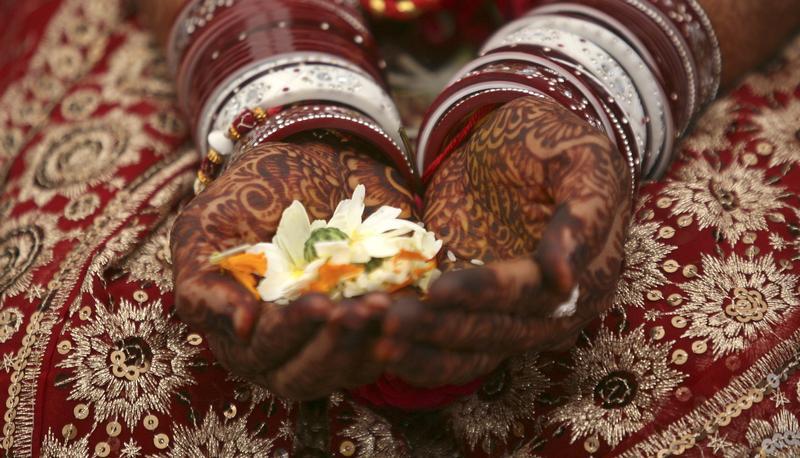 A bride holds flowers in her hands decorated with henna. Credit: Reuters/Amit Dave.

“This is not the creation of a new offence, it is the removal of a common law fiction which has become anachronistic and offensive and we consider that it is our duty having reached that conclusion to act upon it.” – The House of Lords, on the Common Law Exception to Marital Rape

It is getting increasingly difficult to keep track of the views of the government and that of the Minister for Women and Child Development on the issue of marital rape. On June 24 2015, a news item quoted the minister as saying that ‘violence against women should not be limited to violence by strangers.’ Welcome as this statement was, it was not consistent with the views of the government at the time.

This year, while answering a question in the Rajya Sabha, Maneka Gandhi remarked that “It is considered that the concept of marital rape, as understood internationally, cannot be suitably applied in the Indian context due to various factors like level of education/illiteracy, poverty, myriad social customs and values, religious beliefs, mind-set of the society to treat the marriage as a sacrament, etc.”

This statement has caused considerable anger and disappointment because of the shaky logic on which it is based. The purported link between poverty, illiteracy and the state’s inability to apply the concept of marital rape to the Indian context is absurd. This view has shades of paternalism and class bias. Is the minister saying the poor and uneducated are more likely than the rich to commit violence on their spouses, and hence the state cannot take steps to criminalise and prosecute this violence?

Further, the appeal to social customs and values as well as religious beliefs is a clear abdication of state responsibility. If we do have customs and beliefs that legitimise the rape of a spouse, it is the responsibility of the state to step in and crack down on these values, so that our citizens can live a life free from violence. Our country has had a history of religion justifying caste and gender based discrimination and horrifying violence, and the role of the state is to step in and reform society, not be a passive spectator to regressive social practices. A helpless deference to religion and customs, especially when they promote violence or discrimination, runs afoul of our constitutional principles.

In the latest development, the home ministry has informed the Rajya Sabha that the Law Commission has been requested to deliberate on the issue of criminalizing marital rape. This is a welcome move, and it is hoped that something concrete will emerge out of these deliberations. Similar promises had also been made in December 2015. In the past the Justice Verma Committee Report had suggested that the exception to marital rape be removed. Though the Criminal Law Amendment Act, 2013 amended the law pertaining to rape and sexual violence in India extensively, it did not incorporate this recommendation.

It is important to understand the historical context behind the exception given to marital rape in our legal regime.

The root of the exception which legitimises marital rape is the idea that by marrying, a woman gives irrevocable consent to her husband to have sexual intercourse with her, at any time that he would demand it.  This quote by Sir Matthew Hale has become canon in explaining and understanding this historical concept:

“The husband cannot be guilty of a rape committed by himself upon his lawful wife, for by their mutual matrimonial consent and the contract the wife hath given up herself in this kind unto her husband, which she cannot retract.”

The wife was essentially seen as the property of the husband, to do as he pleased with her.  The vestiges of this mind-set can be seen in the exception provided to marital rape, as well as the Section 497 of the Indian Penal Code, which pertains to adultery. This section reads like a property offence more than anything else, with its emphasis on the consent of the husband, and the fact that only a man who has sexual intercourse with a married woman can be prosecuted for adultery under it.

However, concepts of partnership and marriage have thankfully evolved since then, and a marriage is no more assumed to be a carte blanche for sexual intercourse. In Britain itself, the marital rape exemption was abolished in 1990s, with the country’s Law Commission condemning the practice.  The House of Lords in a 1991 decision held that that the infamous exemption was not a part of their common law anymore and that “there was no longer a rule of law that a wife was deemed to have consented irrevocably to sexual intercourse with her husband; and that, therefore, a husband could be convicted of the rape or attempted rape of his wife where she had withdrawn her consent to sexual intercourse.” In doing this the House of Lords referred to the exception to marital rape as a common law fiction that was both offensive and anachronistic.

In the US, spousal rape is illegal throughout the country. The criminalisation of marital rape is fast becoming the norm in the world, with many Latin American, South East Asia, European Countries, and African Countries passing laws to this effect. A table with a list of countries with laws against marital rape can be found here.

Of course, what other countries are doing cannot be compelling logic for amending the laws of our own country. 2.6 billion women still live in countries where marital rape is not an offence, and spousal rape remains entirely legal in 35 countries.  Data on countries that have marital rape exemptions (such as India) can be found here.

But changes in the laws of other countries, especially those with highly evolved rights-based jurisprudence, and the rationales for the same should be studied to understand what progressive legislation is, and how a state should respond to gender-based violence. The march for progress is unstoppable, and Indian lawmakers would do well to remember that our country has a responsibility to be on the right side of history.

The push to criminalise marital rape will find support in various international law obligations that are more general in nature, such as the right to life, the right to equal protection before the law and claims of human dignity that form the basis of the corpus of international human rights law. In addition to this, the International Convention on the Elimination of All forms of Discrimination Against Women (CEDAW), read with General Comment No. 12, emphasises the duty of the state to act to protect women against violence of any kind, including sexual violence and abuse which occurs within the family.

The Declaration on the Elimination of Violence Against Women defines violence against women as encompassing marital rape. This declaration puts a specific obligation on member states to exercise due diligence in investigating, preventing and punishing acts of violence against women.  One would be hard pressed to support the case that under international law, one is permitted to carve out an exemption for marital rape.

But why should we look at international law?

The Minister for Women and Child Development has said that the concept of marital rape as seen internationally cannot be applied to India. No doubt these statements find a lot of supporters, who cannot see why legal developments in the United Kingdom, Chile, Colombia or Zimbabwe ought to influence us. It may further be argued by them that given international law (especially General Comments and Declarations) are often described as soft law why should one bother looking at the obligations imposed by them?

The answer is a compelling one. Firstly, saying that the very concept of marital rape cannot be applied to India ignores the vast corpus of international and comparative material available to us and is tantamount to burying one’s head in the sand of cultural specificity. This attitude is the new ‘Indian Exceptionalism’, a belief that history and culture of India is inherently unique, and that somehow India is exempt from the legal and moral obligations that are increasingly internationally accepted.

The author is a lawyer appearing in Trial Courts, Tribunals and the Delhi High Court, and has been involved in research and advocacy on women’s rights and child rights. She completed her Masters in International Human Rights Law from the University of Notre Dame, USA.