Nagpur woman currently involved in litigation for divorce and child custody accuses husband of complaining to the administration that she had breached a non-existent home quarantine order. New Delhi: If you want to judge a man, put him through a pressure test. If you want to test a people, put them through a pandemic. Even as India comes under the global spotlight for isolating, marginalising, vilifying and targeting its Muslim population under the guise of COVID-19, some cases of individuals using the virus to settle personal scores are also being reported. The media, of course, is doing its bit by spreading fake news and polarising propaganda.

On April 12, 2020, Dainik Bhaskar, a leading national news organisation, ran a story about a lady doctor from London violating home quarantine. The news portal, in its online edition under the byline ‘Digital Desk, Nagpur’, claimed that the doctor who belonged to a ‘special community’, had been advised to stay indoors for 14 days after her return from London but was seen roaming around the city, visiting schools and court complexes. The article goes on to claim that the doctor refused to get herself tested by the medical team sent by the municipal corporation, which turned up with an ambulance at her doorstep. It says, the complainant, who is portrayed as a concerned citizen, then approached the collector’s office on April 11, 2020 with a written complaint, seeking his intervention.

What the news report didn’t tell its readers was that:

• The said doctor arrived in India on March 7, 2020 and was never asked to home quarantine.

• There were no requirements of home quarantine of passengers from the UK at the time.

• The woman doctor was screened at the airport, found to be asymptomatic and allowed to go home. 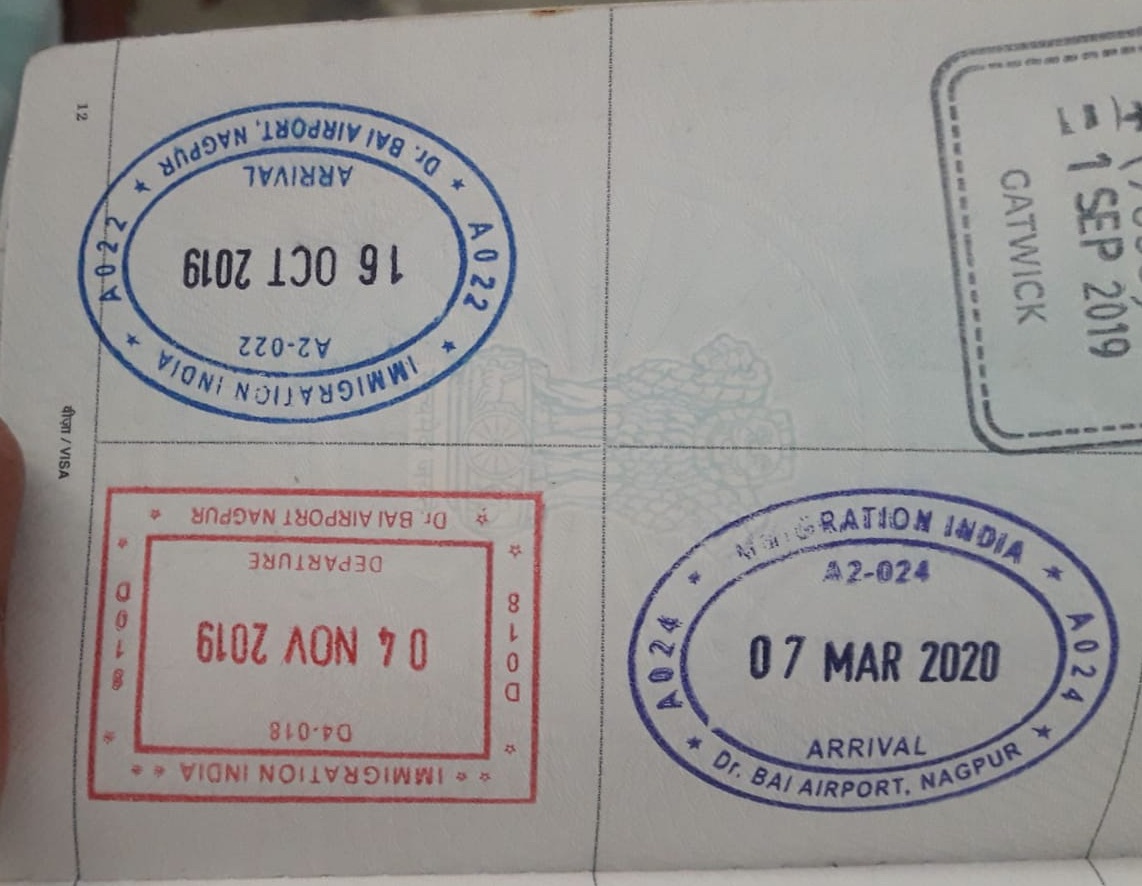 • She was contacted by a Dr Smita from the collector’s office on March 14, 2020, which means that the local administration was aware of her travel details. Dr Smita asked her to report if she develops any flu-like symptoms and added her to a WhatsApp group comprising of other residents of Nagpur who had a recent travel history.

• Subsequently, the district administration prepared a list of persons who were directed to undergo home quarantine but the London doctor’s name was not included on the list.

• The doctor had spent 5 weeks in India without developing any flu-like symptoms, nor has anyone who came in contact with her, before the complaint was filed against her at the collector’s office.

And this is where the story gets murky.

The complainant who approached the collector’s office is none other than the lady doctor’s estranged husband. The couple is currently involved in litigation for divorce as well as the custody of their 9-year-old son. 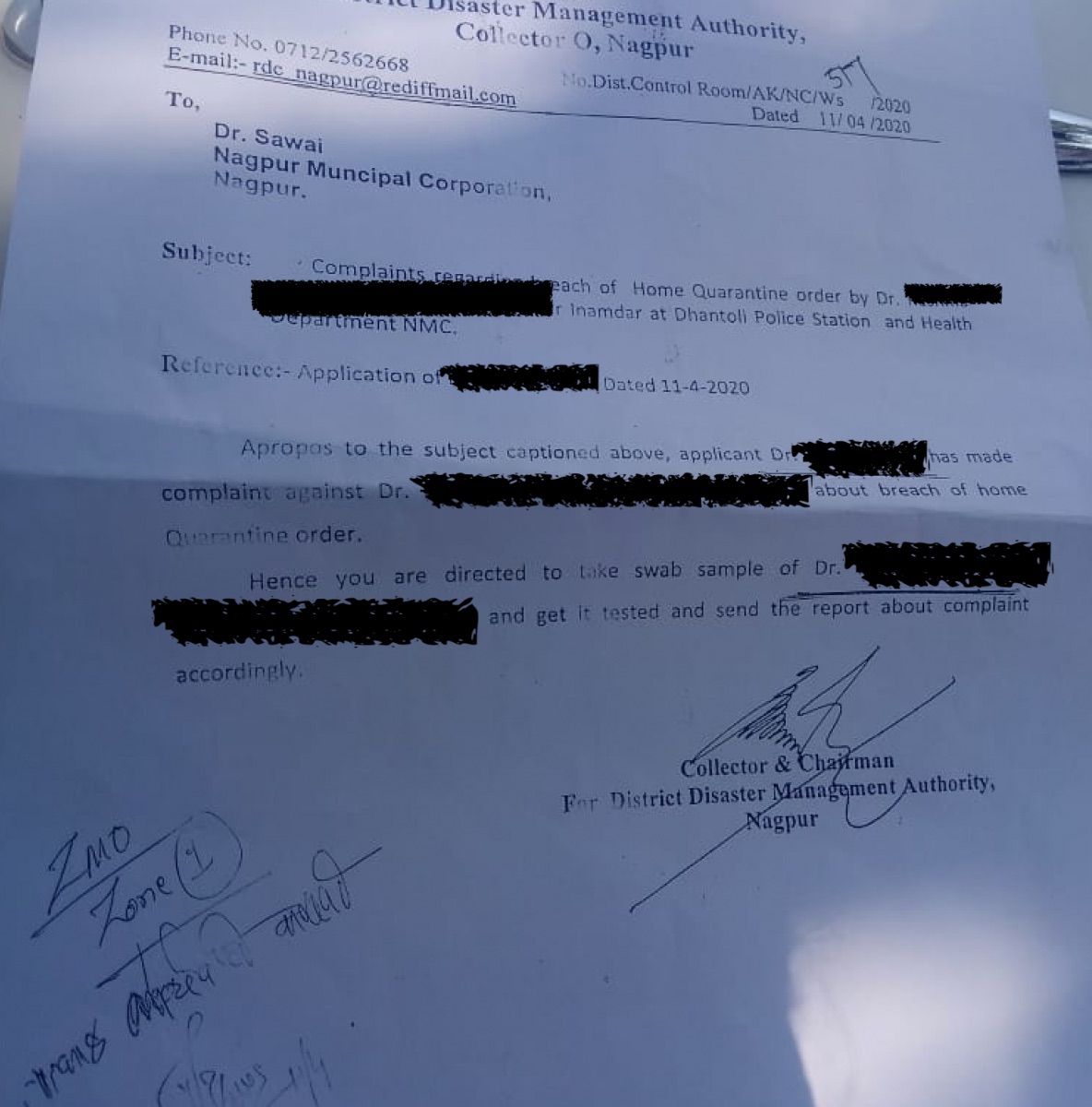 The person who complained to the authorities about the possibility of the woman being a coronavirus carrier was her estranged husband. Names have been redacted. Photo: Special Arrangement The person who complained to the authorities about the possibility of the woman being a coronavirus carrier was her estranged husband. Names have been redacted. Photo: Special Arrangement

Finally, it is factually incorrect to say that woman belongs to any ‘special community’.

The London doctor claims the intention behind her husband’s false complaint was to stigmatise her. She also claims that her husband shared details of the complaint and action taken by the collector’s office with local newspapers.

In the article, Dainik Bhaskar hinted that she belonged to the minority community and mentioned the name of the building where she is currently living. The doctor claims that neither the local administration nor the media felt the need to contact her to check the veracity of the claims made by her husband.

The doctor, who is the daughter of a Muslim father and a Hindu mother, says that religion was never a factor in her marriage to the complainant. With the blessings and involvement of both families, the couple got married as per Hindu rituals under the Hindu Marriage Act. She says that she and her son continue to practice the religion of the husband “as friends and family very well know”, but now that the couple are fighting multiple court battles the husband has made it a habit of referring to her father’s religion, she says. This, she claims, is in the hope that it would prejudice the court and authorities against her.

Since neither her name nor her maiden surname reveal her religious identity, her husband included her father’s name in the complaint to the collector with a view to introducing a communal angle, the woman alleges.

“My husband’s actions, as well as the actions of some of the officers of the district administration who have fallen prey to his deception and lies have caused harassment to my 70-year-old mother, 9-year-old son and me,” she says. “The repeated visits by police and NMC personnel to our home have resulted in our neighbours suspecting that I am infected. All this has caused us tremendous psychological stress. The articles in newspapers have damaged my reputation within the community, particularly amongst doctors in Nagpur since it is a close-knitted group. He shared all this information with the reporter without any thought of me or my child’s privacy and safety.” 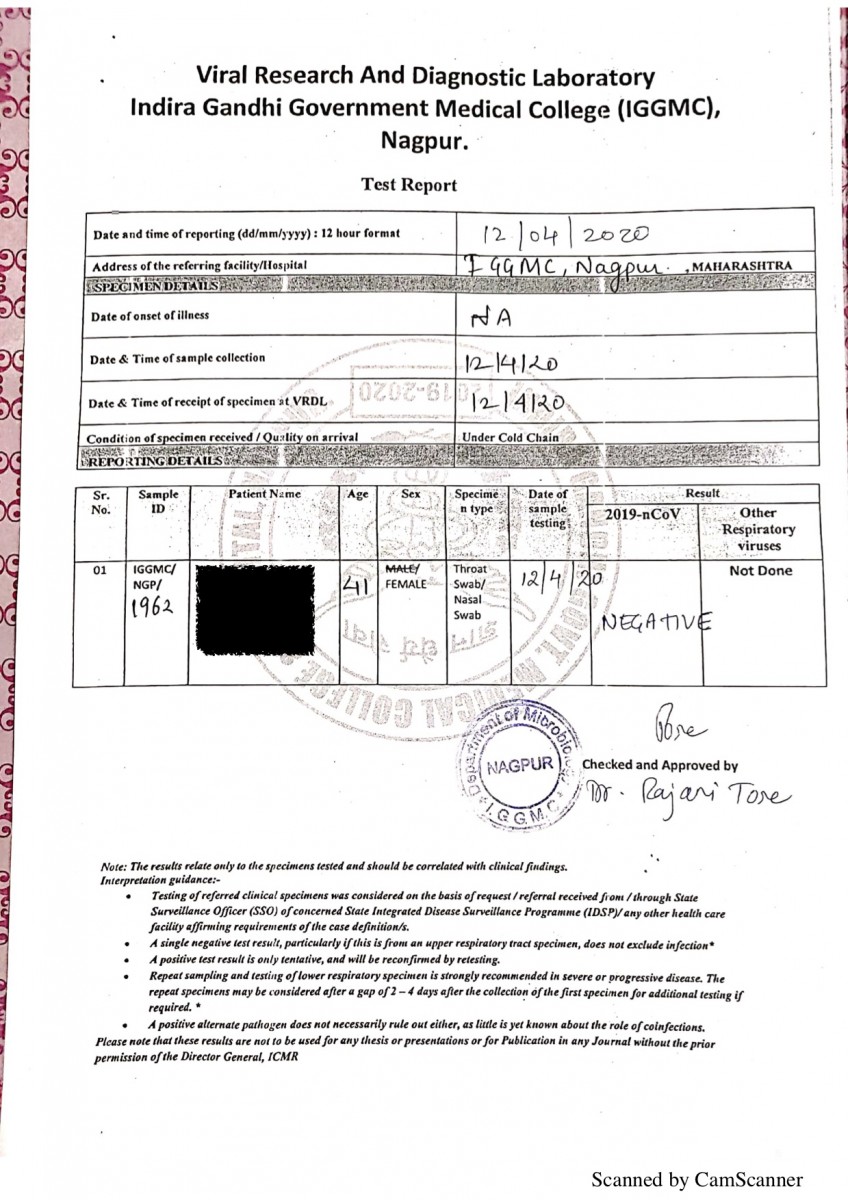 COVID-19 test report of the Nagpur woman, with her name redacted by The Wire. Photo: Special Arrangement

While the doctor thought it best to undergo a COVID-19 test with a view to putting an end to the controversy and to expose the falsehood in the complaint, this experience has been an ordeal for her.  She was taken to the Indira Gandhi Medical College and Hospital by a medical team and the local police, causing her embarrassment in front of neighbours. She tested negative for the infection but the entire exercise meant that she was unnecessarily exposed to symptomatic patients at the hospital. “In order to conduct the test, I was confined to the hospital for 24 hours and made to wait close to symptomatic patients being examined, thus exposing me to risk of contracting the infection and thereby also putting to risk my aged mother who lives with me. At the very least, the officials could have collected the sample from my home since admittedly I was asymptomatic for more than five weeks after arrival in India”, she says.

A most unusual aspect of the case is the conduct of the local administration which acted on the husband’s complaint without checking its own records where her travel details were listed. ‘ he collector’s order unknowingly aids and abets my husband’s plans. Had the collector given me an opportunity to explain, then I could have made him aware of my husband’s ulterior motives and also the above mentioned facts regarding home quarantine’.

When asked why his office issued an order to test the doctor from London when there were records available in his own office to show that she had arrived in India five weeks before the complaint was filed, collector Ravindra Thakre said he wasn’t aware of the details. Furthermore, he passed responsibility on to the municipal commissioner and said that the NMC would be in a better position to respond to the query.

The Wire spoke to the husband, who asked that we call after some time but later calls went unanswered. This story will be updated when he responds.