'Bura Maano, Holi Hai': Why the Festival Is No Excuse to Violate Women’s Consent

There is no getting away from it – Holi perpetuates rape culture like no other festival. 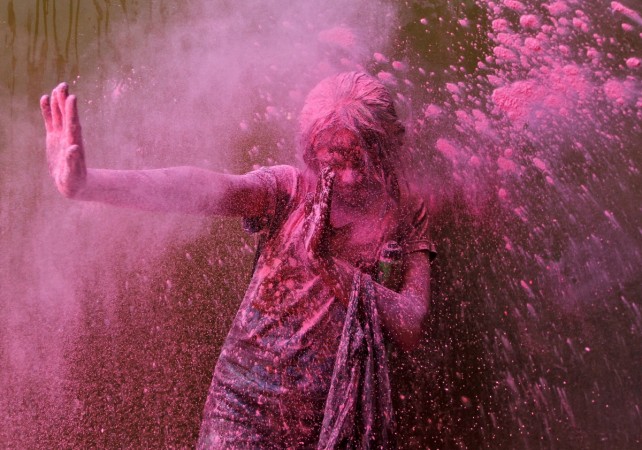 Women don’t have too many free spaces, and the ones they have shrink every time there’s a public festival that involves a display of toxic masculinity. Credit: Reuters

My earliest recollections of Holi are from 1987, at the age of seven, a blurry, monochrome memory of my arms being pinned to my sides while an older boy and his father rubbed aabir on my face. I was terrified and struggled to free myself, the gritty, coloured powder filling my nostrils and mouth. I could not understand at that age why my screaming ‘No, I don’t want this’ was ignored and countered with raucous laughter and taunting.

For the next few years I barely participated in Holi, associating it with violence and claustrophobia. Social conditioning played as much a part as a tight group of friends in my eventual acceptance of the festival as I grew older.

I remember, 1987 was also the year when a young Delhi University research scholar’s alleged suicide, reportedly after sexual harassment, led to the formation of a campus vigilante group – Goonda Virodhi Abhiyan (Anti-Hooliganism Squad) – that patrolled the streets of Delhi on Holi to stop sneak attacks on women.

Years later, the vigilante group has been replaced by police patrols, but targeted harassment of women at Holi continues. The Lady Shri Ram College students’ union has put out a bulletin requesting the help of the police in curbing a vile new menace – semen-filled balloons – proving, again, that there’s no depth the depraved will not plumb to violate women.

In a year rife with discussions on effusive, unambiguous consent, Holi sticks out as a bit of a cultural quandary. Whatever feeling of community the festival evokes is marred by the licentious violation of a person’s private space.

On any other day of the year, men holding down reluctant women and smearing colours on them, chasing them down streets and throwing water missiles at them would invoke public outrage and penalty. But this one day is Disneyland for sexual predators and paedophiles.

For years I’ve hesitated to call it what it is, perhaps fearing harsh criticism, which today on social media would be swiftly dubbed as anti-nationalism, but there is no getting away from it – Holi perpetuates rape culture like no other festival.

A guy flinging semen at women is a step away from committing other sexual crimes if he goes unpunished.

The horror stories are unending. Women speak of excreta-filled bags, diluted acid, and betel leaf spit hurled at them during Holi. Over and over, consent is side-stepped as diesel is mixed in liquid paint and indelible ink powder hidden in water soluble colours to trick the reluctant. A friend once laughingly told me, “Imagine her (the target of the prank) face when she takes a bath thinking it’s only gulaal and will come off with water and soap.”

At the heart of this gross violation of a woman’s will and body is the entitlement of missile-flinging men who hide behind high ramparts.

Senior journalist Jyoti Punwani recalls that in 1989, she refused to go to work as a mark of protest in Bombay (now Mumbai)  because the streets were not safe. No effort was made by the police to stop mobs from swarming two-wheelers and pedestrians, leaving them drenched, flustered and violated. Almost three decades later, the situation clearly hasn’t changed much.

Why men do what they do

The most common form of this abuse is the overriding of women’s consent through the war cry ‘Bura na maano, Holi hai’ (It’s Holi, take no offence). Stripped of its odious politeness, ‘Bura na maano, Holi hai’ is a crude attempt to normalise sexual violence, force women off the streets and send them into a state of lockdown until the euphoric high wears off. Women don’t have too many free spaces, and the ones they have shrink every time there’s a public festival that involves a display of toxic masculinity.

When else would a charged mob get the right to run amok on the streets with full societal approbation? From the playground to the classroom, we don’t teach our children the complex ethics of consent growing up. And in a society that values men over women, the poor understanding of consent, coupled with male entitlement, manifests in the worst ideas of ownership over a woman’s body.

However, it’s heartening to see that women are fighting back.

Can we please agree with this.
Bura maano, Holi hai.

Because fun and play are great as long as they're not harming anyone, and it's sad that a festival as beautiful as Holi is being ruined for so many young girls, boys, men and women because of cretins harassing them. pic.twitter.com/yhSdL7eZKo

Kaur says when she put it up on Instagram, women reached out to say that they’ve been targets of semen balloons. It wasn’t a one-off incident. Set against a magic marker pink background, Kaur’s message asked women to stand up against those who used Holi as an excuse to commit sexual crimes.

The image, which first popped up on my Facebook feed, a day later appeared on some of the WhatsApp groups I am part of, some of them with only women members. It instantly resonated. The primary emotions were anger and frustration at our inability to control the sanctity of our physical space.

A moment in history

“The problem arises in our homes. You teach children that this is one day when consent does not matter as much as on other. You will be excused for touching somebody. Even putting ‘gulal’ (coloured powder) (on the unwilling) is harassment,” Kaur says.

There is a revolution afoot. Women have broken centuries of silence to reclaim all spaces dominated by men. Last year was a year of raised voices. So, it’s important that our uncomfortable silence about Holi past is not read as complicity. Women have to unambiguously let men know they will no longer tolerate an invasion of their bodily sanctity and will fight back if they have to. As I write this, women in several cities are organising marches to reclaim the streets on Holi.

Men are not going to stop until women stop laughing it off, says Sukhnidh.

How then, do we make the streets safer? No easy answers. Social conditioning and the firm drawing of boundaries – not just by women, but by parents, schools and even the law and order machinery – may be one answer. The government-led, school-level campaign on the lines of the successful Diwali cracker ban to teach children the importance of consent and bodily sanctity could be another.

But till that happens, the burden, it seems, is once again on women to remain alert, re-group, educate and most important, protest.

Rituparna Chatterjee is the former deputy editor of HuffPost India and writes on women’s rights. She tweets at @masalabai.