Domestic violence against women, seen as happening in the 'private sphere' of the family, inflicts costs on households, businesses and the overall economy. 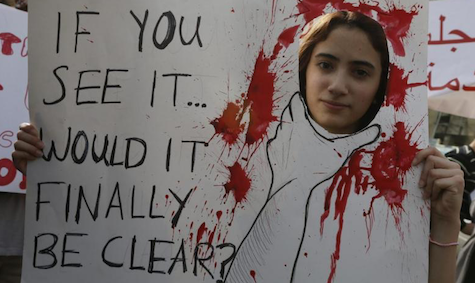 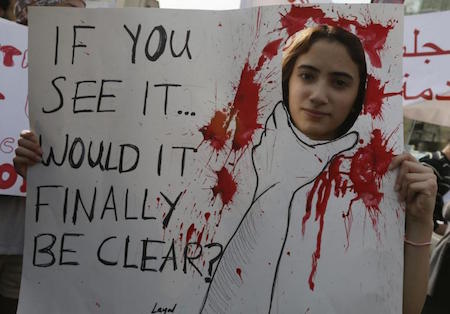 An activist holds a banner during a march against domestic violence against women, marking International Women’s Day in Beirut, March 8, 2014. Credit: Reuters

A recent IndiaSpend article revealed that in the ten years since the Protection of Women from Domestic Violence Act (PWDVA) was passed in 2005, over 1,000,000 cases have been filed pertaining to “cruelty by husband” and dowry. Although disaggregated data in terms of types of violence is not reported, it is revealed that almost 30% of married women between the ages of 15 and 49 years have experienced sexual violence at least once.

The patriarchal mindset that dismisses violence against women as a “private matter” between intimate partners perpetrates an enduring damage to the economy and society. Growing scientific research, using domestic violence data from around the world, establishes that violence against women, which happens within the private sphere of the family, inflicts economic costs to households, businesses and the overall economy.

The economic possibilities for women are inextricably tied with the consequences of violence and, in particular, violence within the home. A critical path by which violence impacts the economic opportunities and capabilities is through its insidious impact on the physical and mental health of women. Women experiencing domestic violence are more likely to have a chronic health condition. They also suffer from poorer mental health – depression, anxiety and the underlying trauma affects women, at both physical and psychological levels. Thus, violence induces a vicious cycle whereby it adversely affects both women’s labour force participation and education or skill development, and influences economic empowerment and the status of women in the society, which, in turn, exacerbates violence.

A growing body-scientific research shows that women’s poor economic outcomes are directly related to the trauma inflicted by violence – women experiencing domestic violence have greater employment instability (higher job turnover, less likely to rise on the promotion ladder, and so on). Women experiencing domestic violence have up to 35% lower earnings than women who do not have an experience of violence. In some countries, this difference in earnings alone is equivalent to 2-3% of the GDP, representing a sizeable loss of productivity for the country. Women also spend more out of their own pockets to access services; studies show that in the US, women pay for about one-third of the costs for medical treatment and for counselling after rape or physical assault.

Additionally, there are costs for the extended family, as well as friends and workplace colleagues. Recent studies on the impact of domestic violence at the workplace show that that there is an impact on the productivity of the co-workers who provide support to women experiencing domestic violence. A study on businesses in Peru suggested that colleagues who provided support to women survivors of violence lost productivity to the tune of US $595 million or about 8% of the total loss of $6.7 billion to businesses due to domestic violence. In simple words, violence costs business.

It doesn’t just stop there. New research evidence documents that intimate partner violence affects the entire economy. A recent study on Vietnamese economy shows that the macro-economic loss due to domestic violence is almost 1% of its national income (GDP). From a macroeconomic perspective, the loss due to violence against women is a leakage that is permanently lost from the economy.

Furthermore, domestic violence undermines not just the day-to-day functioning of women, but the capabilities and the potential of children. Studies show that children growing up in violent households suffer from cognitive difficulties, lower educational performance and increased juvenile delinquency. Another important dimension that is unrecognised is the impact of trauma on the unpaid care work that women do and the consequent impact on the welfare of children. Over time, this affects the capabilities, education and skills of the future workforce, and constrains the human capital potential that can undermine the growth trajectory of the economy.

Therefore, there is a trade-off that the patriarchal mindset is oblivious to – the longer the issue of violence against women is dismissed as a private matter, the bigger the hole in the economy. Consequently, this trade-off leads to a fundamental contradiction in economic policy, where ignoring the issue of violence against women for cost-cutting measures only lead to a bigger loss to the economy that can weaken, and even neutralise, the effectiveness of government welfare policies. In fact, if one looks at the notion of “fiscal space” through a gendered lens, the sustainability of the fiscal space would very much depend on minimising the loss due to violence against women.

Srinivas Raghavendra and Nata Duvvury, faculty members at NUI Galway in Ireland, are leading a project on economic and social impacts on violence against women and girls as part of a global programme on What Works to Prevent Violence Against Women and Girls, funded by UK Department for International Development.