The 2012 Delhi Gang Rape: Justice Does Not Stop at the Death Penalty

Jyoti Singh’s rapists are the symptoms and not the problem of sexual violence in India. 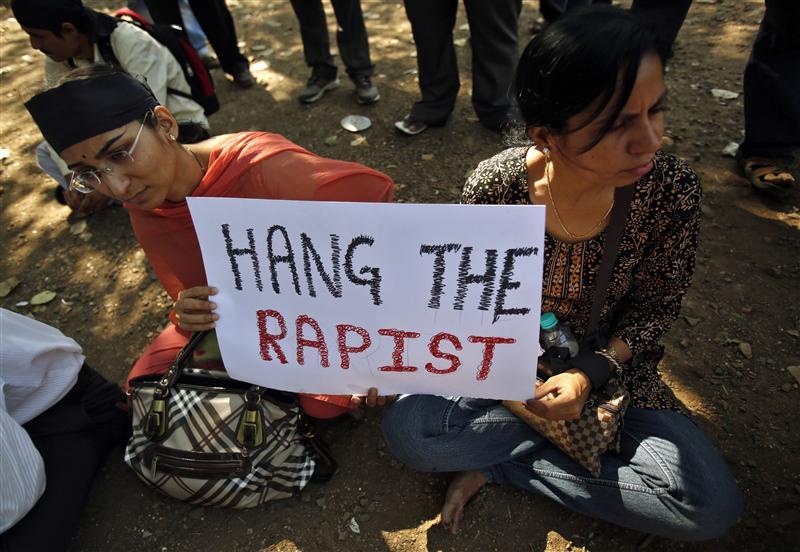 Protesters hold a sign as they participate in a demonstration to mourn the death of a rape victim, who was assaulted in New Delhi, in Mumbai December 29, 2012. The Indian woman, whose gang rape sparked protests and a national debate about violence against women in India, died of her injuries on Saturday, prompting a security lockdown in New Delhi and an acknowledgement from India's prime minister that social change is needed. REUTERS/Vivek Prakash (INDIA - Tags: CRIME LAW CIVIL UNREST)

Last week, the Supreme Court upheld the death penalty for four of the rapists in the December 2012 gang rape of Jyoti Singh. The gang rape, which took place in a moving bus in the capital city, has received widespread attention both in India and abroad.

The apex court’s judgement was based on the incident being the “rarest of rare” – a criteria required to award the death penalty in India. The judgement described the offenders as “barbaric and demonical,” noting that “if ever a case called for hanging, this was it”.

Twitter and the news media echoed these sentiments. Well-known journalist Barkha Dutt tweeted that the case “definitely meets rarest of rare benchmark,” while others celebrated that justice was served and demanded actions such as castration or “torture until death”. “Rare” was the most used word to describe the incident in the press, followed by “brutal,” “diabolical,” and “heinous”. Times Now, the English news channel with the highest viewership ratings in India, ran the story with the headline: “brutes sent to gallows”.

The portrayal of the 2012 Delhi gang rape as ‘rare’ contains key factors over the past five years: first is that this incident was exceptional because of its extreme violent nature, which included the insertion of a rod into the victim and damage to her internal organs; second, that the rapists were some sort of depraved monsters that were unusual to average Indian society and hence capable of such inhuman acts.

Both factors are false. Neither was Jyoti Singh’s rape rare in the intensity of its violence, nor was the intent of the rapists entirely different from what data on sexual violence in India proves.

This article does not debate the merit of the death penalty. But it makes a case that justice does not stop with legal punishment (whatever your stand on the nature of the punishment is); it demands that citizens participate in addressing the root causes of the rape.

Singh’s gang rape was not the first nor the last brutal incident of its kind. In May last year, a young girl was stabbed 30 times and had her intestines gouged out by a sharp object. In 2015, a woman’s body was found in Haryana on the side of the highway with missing limbs and sticks and stones in her private parts. Later that year, a 71-year old Catholic nun was gang raped by eight men in West Bengal. In Uttar Pradesh in January this year, a teenage girl’s ears were chopped off as she attempted to resist rape. Minors between the ages of two- and eight-years are routinely raped. On average, 93 women are raped in India every day.

The difference between Singh’s rape and the majority of rapes that receive lower attention is that 88% of rapes happen in rural India to women from lower classes and castes. The domination of upper-castes in India’s political, economic and judicial sphere, especially in rural India, make both outrage and the delivery of justice less frequent. The close caste networks in villages often result in the offender and police colluding in refusing to officially record a rape, and in cases where they are recorded the police is often unable to act upon the offender for the same reason.

The English press won’t carry these stories of rural and lower-caste victims with the same vigour and activism as it did in the aftermath of Singh’s rape, as their primarily urban, middle-to-upper class target audience do not identify with these victims. Singh was a student living in a big Indian city, hailing from a middle-class family and returning home from the release of the latest English movie. While the number of recorded rapes have only changed mildly in the past decade, the average reporting on rapes in the English press has gone up by four-fold since December 2012.

Reflections, rather than exceptions, of Indian society

The idea that Singh’s rapists are evil abnormalities or extreme departures from average Indian society allows the convenience of diverting blame away from ourselves. Last week’s judgement read that “the way the crime happened, it sounds like a story from a different world”. The data and statistics around gender dynamics in India show that incidences of sexual violence are representative of deep-rooted social structures and stigmas.

According to the National Crimes Records Bureau of India, over 95% of rape victims know their rapist. These rapists are not ‘brutes’ lurking in the streets and back alleys, but are in fact within family and friends’ circles. A study released in 2014 by the UN Population Fund and the International Centre for Research on Women reported that two-thirds of men surveyed across India admitted to having inflicted violence on their partners, while one-third had coerced their wives into performing a sexual act. Based on interviews with over 12,000 participants, the study further reported that the average male, across income, age and geography, believed that masculinity was about controlling women. Further, the majority of both male and female participants showed a preference for sons over daughters.

Rapists – even those who were capable of doing what they did to Singh – are not the real problem, but are simply manifestations and symptoms of the far more complex challenges of patriarchy and gender inequality. In an interview for the BBC documentary, India’s Daughter, one of the rapists, Mukesh Singh, said: “a decent girl won’t roam around at nine o’clock at night. A girl is far more responsible for rape than a boy,”. The documentary-maker Leslee Udween noted that “the horrifying details of the rape had led me to expect deranged monsters. Psychopaths. The truth was far more chilling. These were ordinary, apparently normal and certainly unremarkable men.” The documentary was banned in India.

Questioning our own social behaviour

Gaining satisfaction from this punishment is right, up until it is about Singh getting justice and the police and courts delivering. Justice also exists outside of the legal sphere, and requires going beyond the courts and participating as a society to prevent further rapes. This would mean looking at our own social behaviour and correcting the power and gender imbalance. Do we raise our sons and daughters equally? Do we pay our male and female employees the same wages? Do we uphold patriarchal practices within our family structures?

Last week’s ruling ended saying, “stringent legislation and punishments may not be sufficient for fighting crimes against women”. Furthermore, it said,“Every individual, irrespective of his/her gender must be willing to assume the responsibility in fight for gender justice and also awaken public opinion.”

Anushka Shah is a researcher at the MIT Media Lab in Boston.