While the NCRB data have shown a substantial rise in crimes against women, activists say there has been an increase in reporting rather than the rate of crime. 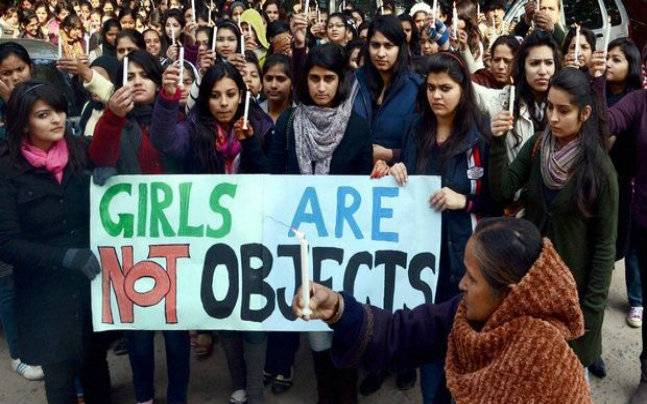 Girls take a stand for crimes against women. Credit: PTI

As many as 39 crimes against women were reported every hour in India, up from 21 in 2007, according to Crime in India 2016 report by NCRB.

The year 2016 saw the lowest conviction rate (18.9%) – percentage of cases convicted to cases in which trials were completed by the courts – for crimes against women in a decade.

“More than the increase in crime rate, it is increase in reporting,” Flavia Agnes, women’s rights lawyer and co-founder of Majlis, a non-profit that provides legal services to women and children, told IndiaSpend.

“There are no mechanisms to analyse such events,” said Agnes. “I feel that due to media pressure on certain brutally violent incidents, there is greater awareness, and women are coming forward to report crimes.”

As many as 13,803 crimes against women were reported in Delhi city, or 38 every day, topping the list among 19 cities with populations more than 2 million in 2016, IndiaSpend reported on December 1, 2017.

Cruelty by husband/relatives most reported crime against women in 2016

Cruelty by husband/relatives was followed by cases reported under “assault on women with intent to outrage her modesty” (25%), “kidnaping & abduction of women” (19%) and “rape”(11%).

Crimes covered under “assault on woman with intent to outrage her modesty” include relatively more serious crimes such as ‘sexual harassment’, ‘assault or use of criminal force to women with intent to disrobe,’ ‘voyeurism’ and ‘stalking.’

Four rape cases reported every hour in 2016, from two nine years ago

Four rape cases were reported every hour in the country in 2016, up from two every hour in 2007. Madhya Pradesh registered the most cases (4,882), while Sikkim reported the highest crime rate for rape (30.3). The nationwide crime rate was 6.3.

Conviction rate for crime against women lowest in decade

West Bengal, which registered the second most number of crimes in 2016, reported the lowest conviction rate (3.3%).

“This means that with great faith in the system, victims and/or their relatives come forward to report crimes. After a rigorous criminal trial, if the accused is convicted, the victim gets a closure that she has secured justice. But when she has to withdraw or the verdict is adverse, the victim experiences a sense of failure and she is stigmatised.”

“This does not mean that the case was false but she withdrew it only to bring in closure and move ahead with her life. Despite this, what we read in the media is that women file false cases despite the fact that women experience high degree of domestic violence in marriages,” she added.

What is needed, Agnes said, is victim-support programmes so that once a case is filed, the survivor gets support to face the daunting criminal legal system. “If this is done, it will not be such a lonely battle for the victim. We need a provision in law so that victim support is built  into the statute. Only then can we see change as more cases get registered.”

Chaitanya Mallapur is an analyst with IndiaSpend.