Mother, Daughter Gangraped in UP; State Government Comes Under Attack

The gang of men then tied up the male family members, and sexually assaulted the mother and daughter while they were travelling along the Ghaziabad-Aligarh highway. 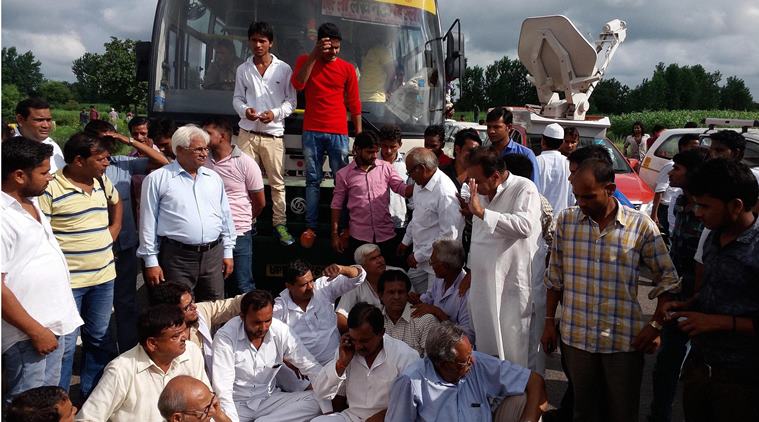 Bulandshahr: People block national highway 91 in Bulandshahr against the rape of a woman and her daughter on Sunday. Credit: PTI

New Delhi: A 37-year-old woman and her teenage daughter were dragged out of the car they were travelling in along the Ghaziabad-Aligarh highway, and gangraped for over two hours, according to reports. The incident occurred in the Bulandshahr district. Around seven-eight men gangraped the mother and daughter, the family said.

The incident occurred late on Friday night when a Noida-based family of five were driving to Shahjahanpur in Uttar Pradesh. The driver was forced to stop after the men threw a piece of metal at the car, reports said. When the driver got out of the car to check for damage, a group of men overpowered him and allegedly forced him to drive his car into some fields.

The gang of men then tied up the male family members and sexually assaulted the mother and daughter. They then fled with money and other valuables stolen from the family.

Twenty minutes after the incident, the victims called the police helpline number, ‘100’, from their mobile phone, but got no response, the Indian Express reported, after which they called some people they knew. Around 4:30 am, officers from the nearby police station arrived at the scene.

At least 15 suspects have been detained in connection with the case so far, reports said, and three men have been arrested. A case of gangrape, dacoity and robbery has been registered against unknown persons, the Indian Express reported. Uttar Pradesh chief minister Akhilesh Yadav on Sunday directed the heads of the police stations in the area to be suspended.

The police suspect the involvement of Bawariyas, a nomadic group, in the crime. “The modus operandi of criminals points towards tribal Bawariya gangs, though we have been working on all possible angles to crack the case,” Bulanshahr senior superintendent of police Vaibhav Krishna told Hindustan Times.

Meanwhile, the UP government has come under serious criticism after the incident. Former Delhi Commission for Women chief Barkha Shukla Singh, quoted in The Times of India, said, “The road where the incident took place is a very famous and busy road. So in this case the administration and the government of the state should be held responsible. As in such roads, barricades, police depots should be there to ensure safety and if they are not there then the government is simply responsible for the false that has happened”.

“It is very unfortunate that such incidents take place and the atmosphere is such that people cannot travel safely. The culprits should be nabbed and should be prosecuted and the state government should make all efforts to ensure safety of its people,” she added.