In Assam, Bodo Women Are Cycling Their Way to Freedom

Bodo women in Chirang, a remote district in lower Assam, are breaking taboos, overcoming obstacles and handling their own finances – all thanks to the simple cycle. 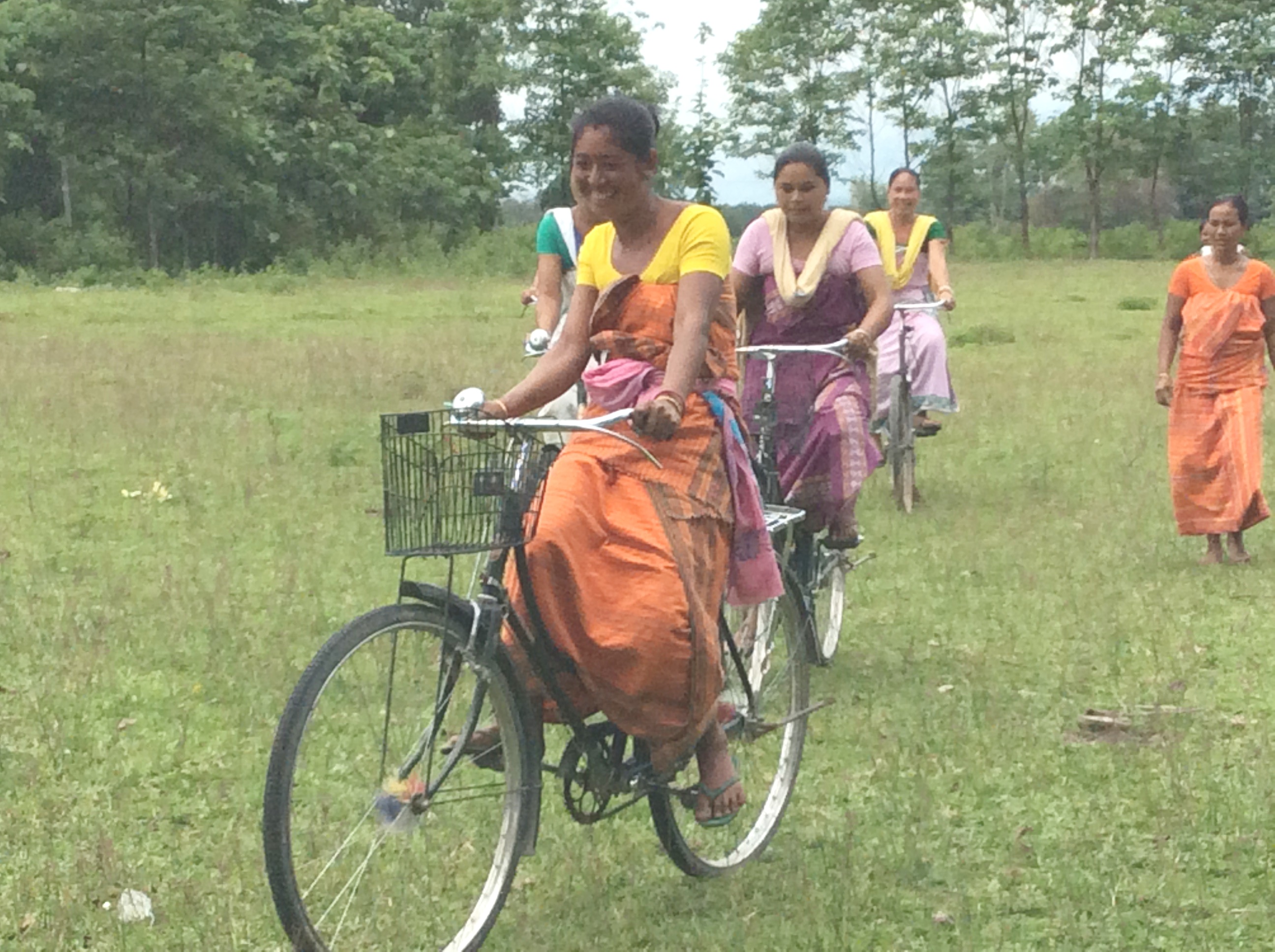 Oxiguri, Chirang district: Twenty-five-year-old Sonita Sorkoari brooks no-nonsense. She is firm, poised, confident and is raring to go. Why shouldn’t she be? She is one of the first Bodo women entrepreneurs to pedal her way above the poverty line.

Resident of a remote village in lower Assam’s Chirang district and coping with continuous insurgency and violence due to the Bodoland agitation, Sonita has managed to carve a niche for herself by cycling and ridding herself of all inhibitions that held her and other women like her back.

Selling items worth nearly Rs 2000 a day from her grocery store, Sonita is now able to send her three children, aged seven, six and two, to school. Two of them stay in hostels and their fees are paid by Sonita alone.

Only three years ago, Sonita could not have imagined such a makeover for herself. She had no voice, no money and least of all, no mobility.

One day, she learnt to cycle and realised its potential. Learning to pedal changed her life from that of abject poverty to relative comfort. Sonita could now ride to the village square, the market, the hospital, the rice mill, fetch her children from school and get drinking water, all on her own.

“Earlier, I had to depend on my husband or other men-folk for getting my daily household requirements. I was not allowed to venture out alone as distances are far and roads few and far between, but the day I learnt to cycle, I felt happy. I felt free and liberated. I vouched to myself that day, that from now on, no one can take my freedom away. My mind raced. I knew cycle opened many doors for me and I realised I could start earning something on my own. So, I thought of opening a grocery store in the village market. I bring the items myself on my cycle. This vehicle is my wagon-wonder, it has made me self-reliant, confident and outgoing. Nothing can hold me down.”

Sonita rides her cycle seven kilometers everyday from her house to her shop. There are several others who ride with her from the Oxiguri village in the Amteka region.

The village’s cycle bank has made many women dream and has helped them realise those dreams.

Initiated in 2013 by a NGO working in the Chirang area, the cycle bank is managed by the village women themselves. With a strength of about 68 members divided into 11 groups, the bank has around 300 cycles, which are rotated on a regular basis. The bank provides cycles on loan to women.

Reema, who heads the Amteka Mouti Foundation’s cycle bank, says, “The bank gives a loan of Rs. 3000 to the women, if they want to buy the cycle. They initially have to pay Rs. 1100. Rest they can repay as Rs. 100 or Rs. 60 each month on a 2% rate of interest. This loan system has helped women who come from extremely poor families to own a cycle with pride.”

Loishi Basumatary, 40, who is considered a leader amongst the Bodo women and one who voices her opinions freely, says, “Business for women has definitely picked up after they learned cycling. It has become a mode of autonomy for them and the cycle just does not belong to the women, it is in fact a family asset. Whosoever needs to travel long distances avail it, if it is on hand. But cycles here have become synonymous with women rather than men. And most women, who were hesitant and preferred to stay home, as distances were a deterrent, now see the cycle as their vehicle of freedom. There is a feeling when others can do it, why not me? And why should I lag behind when all others are pursuing it. There is a kind of a wave cycle effect here in this region.” 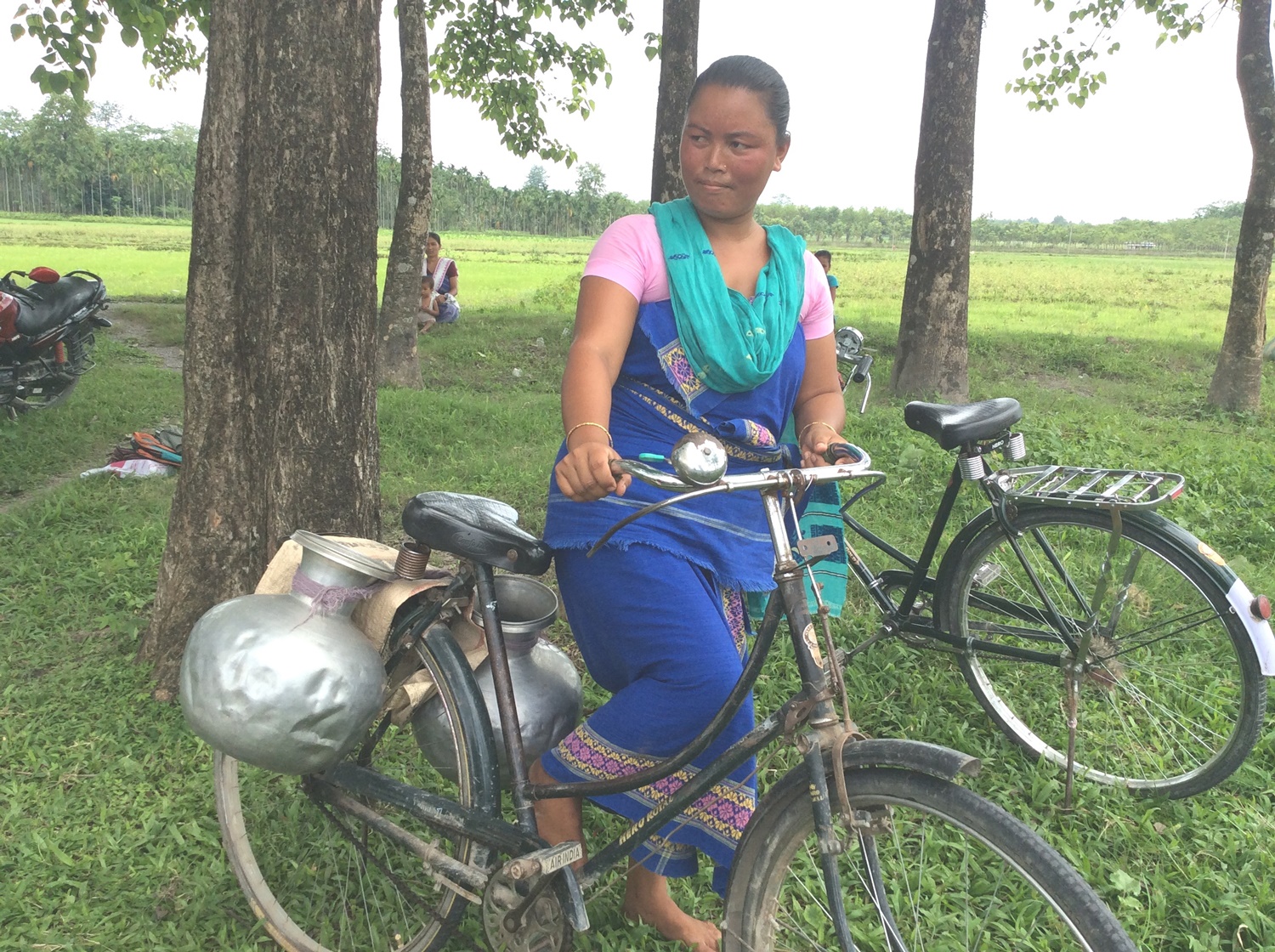 Women carry drinking water to their homes on their cycles. Cycle is almost the lifeline of these Bodo women. Credit: Author

Bodoland has been ravaged by terrorism and insurgency that has scarred the lives of its inhabitants, especially the women and children. Women still prefer to stay home.

Bodo, an ethnic and linguistic aboriginal group of the Brahmaputra Valley in Assam, is said to be the single largest indigenous group in the present demography of the region.

They are recognised as a plains tribe in the sixth schedule of the Indian constitution.

The Bodos use the term Bodosa or Borosa, meaning son of Bodo, to describe themselves. They are said to be migrants from China who settled in the Brahmaputra Valley during prehistoric times. The Bodo language is a Sino-Tibetan language officially written using Devanagari script.

Bodos traditionally practise Bathouism, the worshipping of forefathers, known as Obonglaoree. The shijou plant is considered the symbol of Bathou and worshiped. Bathou is also claimed as the supreme god.

Many Bodo families, under the Bodoland Territorial Council (which includes Chirang, Baksa, Kokrajhar and Odalguri), have been the victims of either climate disasters or conflict and have routinely been displaced.

Climate and conflict in Bodoland

Ethnic cleansing rocked Chirang even before it came into being. In 2014, mindless violence led to the killing of 32 people, including two women who were gunned down by terrorists.

Bloodshed, insurgency and ethnic cleansing are not new for the people of the region, especially the women. It has displaced thousands, caused incalculable misery and loss, as well as mental and physical suffering.

It comes as no surprise then that the Chirang district, ravaged by climate and conflict, has a history of poor health and development indicators.

However, amidst this dismal scenario, there are a few sparks of hope emerging. 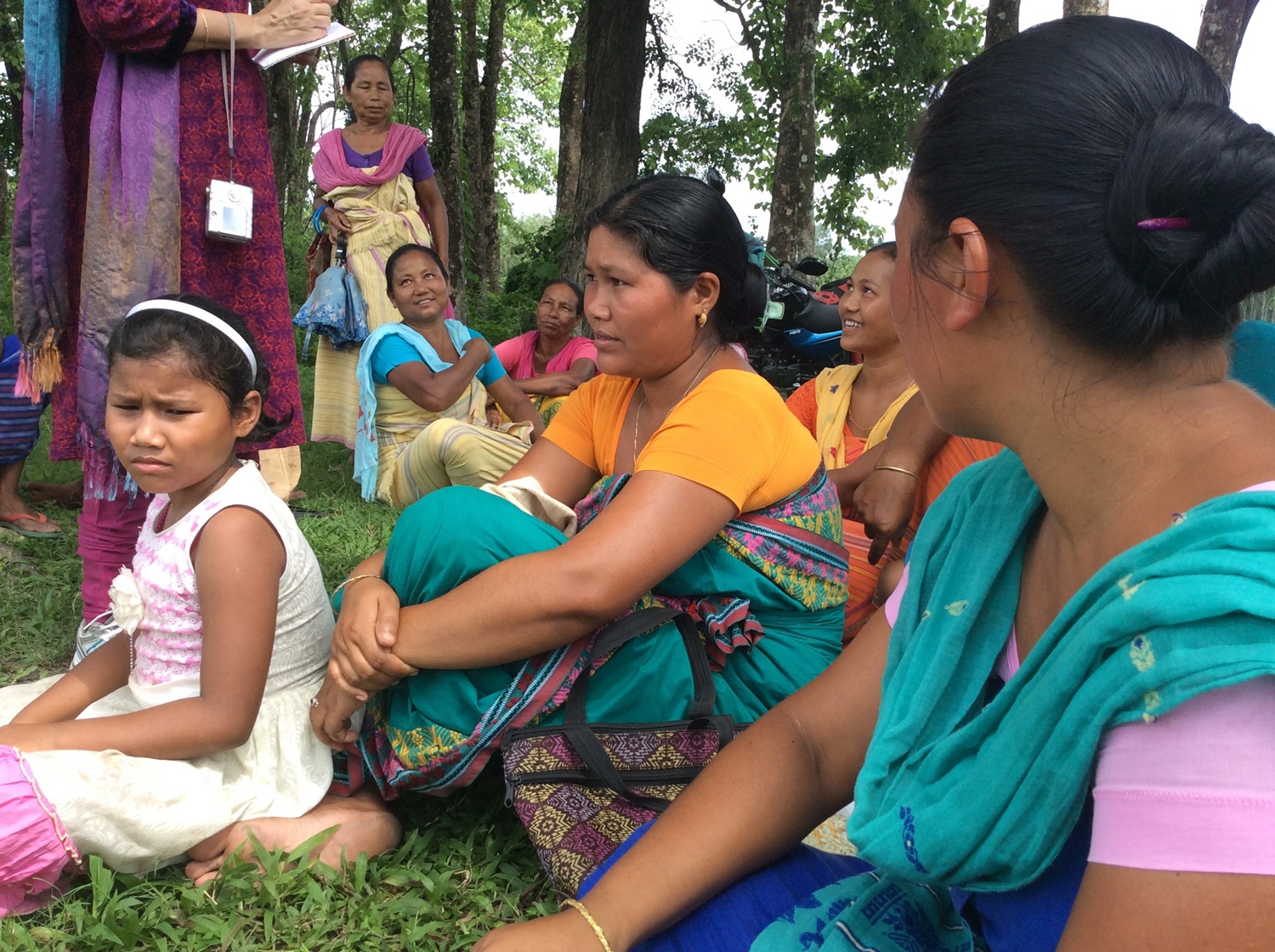 Sonita Sorkoari (in green dokhona) who has turned from a housewife to an entrepreneur with her daughter watching the cycle race. Credit: Author

Cycling toward a new future

An ‘include women’ campaign was held just before the election in April 2016 where at least 3,000 women from Chirang district took part. The women asked for a variety of demands at the event. They asked political parties for tickets for women, ration shops exclusively for women, quality mental health services, an end to violence against them and inclusion in decision-making and governance processes.

Another positive development is Bodo girls breaking the taboo of playing traditional musical instruments, a role formerly designated for men. Bijulee on the siphung or flute, and Daisy on the Khaam or drums, have become the first Bodo girls to play these instruments, breaking the age-old custom of women dancing alongside musical bands.

The key spark, however, has been cycles becoming part and parcel of the lives of the Bodo women in the Amteka region.

It was easy to imbibe the infectious enthusiasm of the Bodo women in Oxiguri on a muggy, sultry afternoon during a visit to the region earlier this year.

With gay abandon, the women were taking part in cycle races both slow and fast. They wore colourful dokhnas (traditional attire) with zymgra (scarf). With no apparent rivalry in the friendly competition, the women seemed to be soaking in the atmosphere – the open skies, the gentle breeze, the mild sun and a cycle run on the lush green fields. They all seemed nonchalant about the mundaneness of their daily lives.

Accompanied by their children, with many of the young ones tied to their backs, it was a day out for women, both young and old. Girls, mothers, mother-in-laws, sister-in-laws and friends, were all together, enjoying themselves.

As a huge haadi (utensil) brewed tea over the firewood, Bodo women chatted nineteen to the dozen, munching on puffed rice and namkeen as they shared their joys and sorrows with one another.

It seemed a perfect day for them to glide towards their dreams, to unfold their desires and to cherish their empowerment.

I’m just a bird in the sky

Over the mountain I fly

No one can take my freedom away

Rakhee Roytalukdar is a freelance journalist based in Jaipur. She visited Assam’s Chirang district in May this year on a cross-learning and exchange programme for journalists organised by Girls Count with support from UN.